Fleetwood Town face Accrington Stanley on Saturday 9 April at Highbury in Sky Bet League One, and we have all you need to know ahead of the 3pm kick-off in our match preview.

With the side now three games unbeaten in the league, they will be looking to try and add three vital points to their tally at the weekend as they host Accrington Stanley at Highbury.

The Cods were held to a 1-1 draw by Lincoln City in midweek, in what was a well-contested clash. Dan Batty drove the side in front 30 minutes in after finding some space and drilling his effort into the bottom left corner before Lewis Fiorini levelled it up midway through the second half.

Before that, Town came out on top in their 3-1 win over Crewe Alexandra away from home. Harvey Macadam, on his first start, opened the scoring from a leaping header, with both Anthony Pilkington and Ellis Harrison adding goals in the second half to secure all three points in the game. 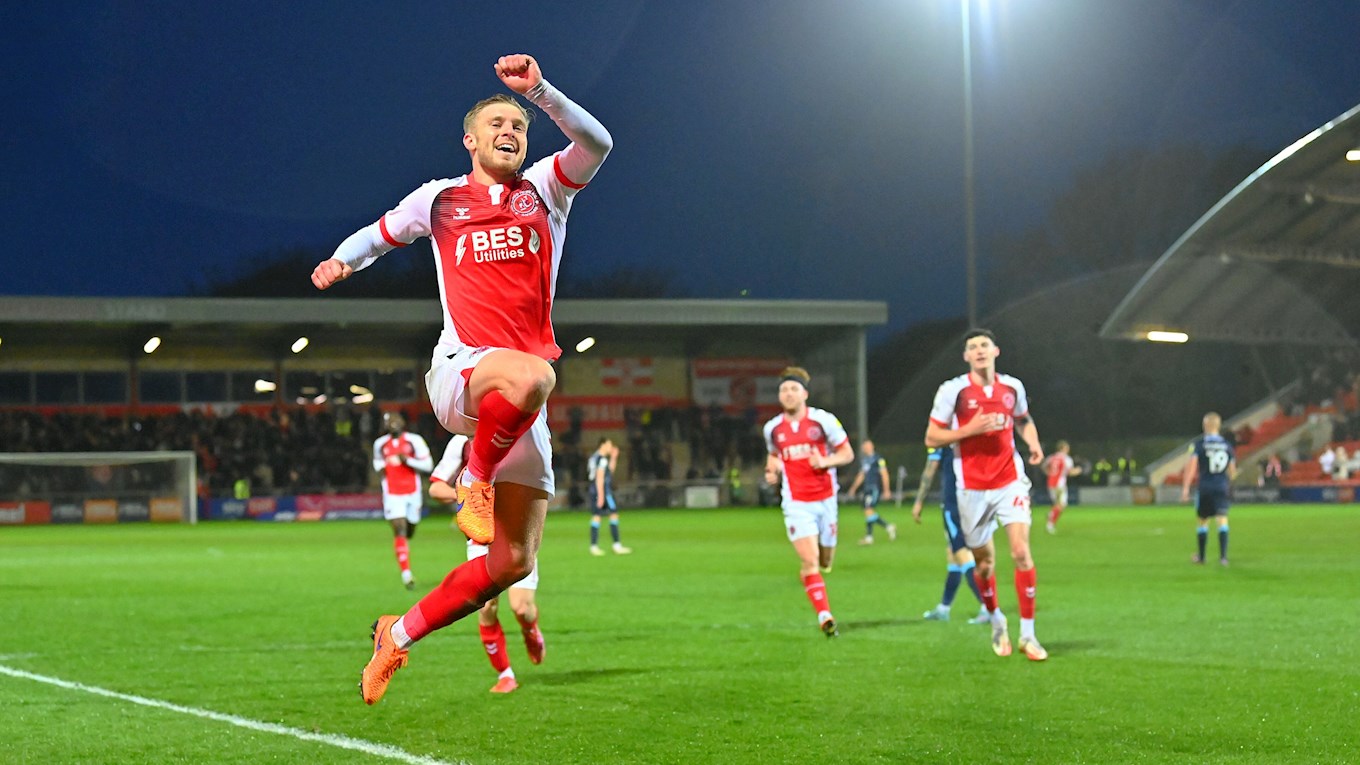 Accrington are comfortably sat in mid-table in League One, even after struggling to get the results they’ve wanted over the last five games, with the last game being a loss to Wigan Athletic.

In that game against the Latics, they were in the game throughout, with Stephen Crainey saying the scoreline didn’t accurately represent the game. It was a close game, but goals from Joe Bennett, Josh Magennis, and Will Keane meant Stanley were unable to pick up any points in that one.

To say it was an eventful game a week ago would be an understatement as there were eight goals, with two of them in the last minute, and an own goal to add to that. Sean McConville and an own goal added to Tommy Leigh’s four-minute brace, but goals from William Boyle and Callum Wright saw the game end a draw. 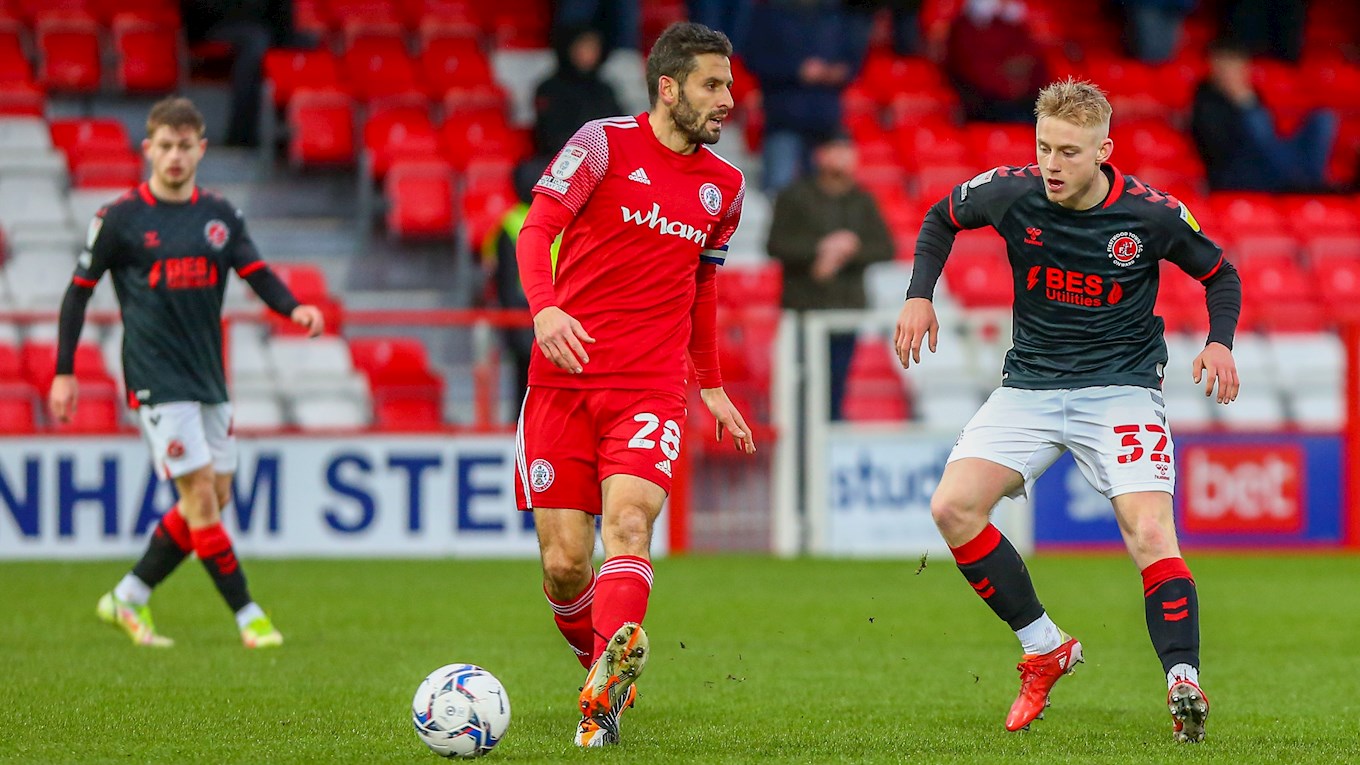 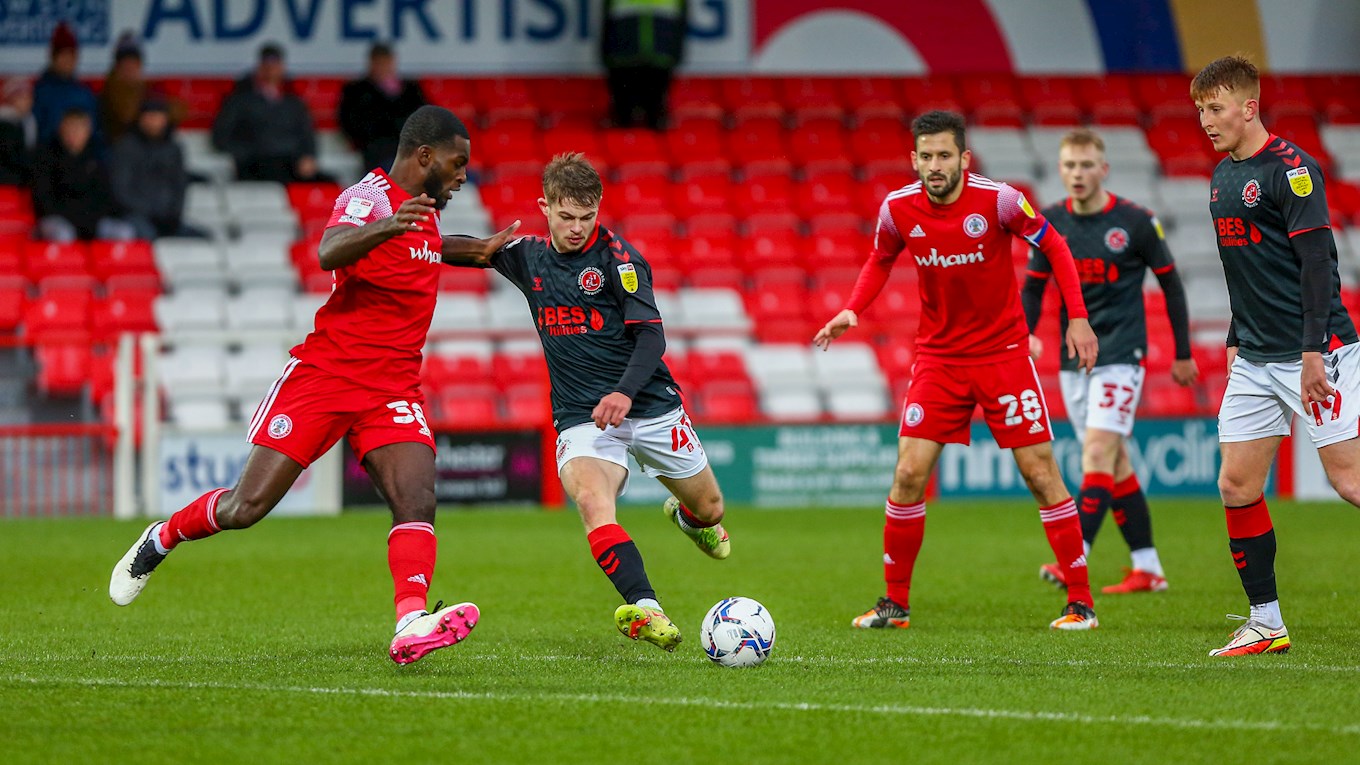 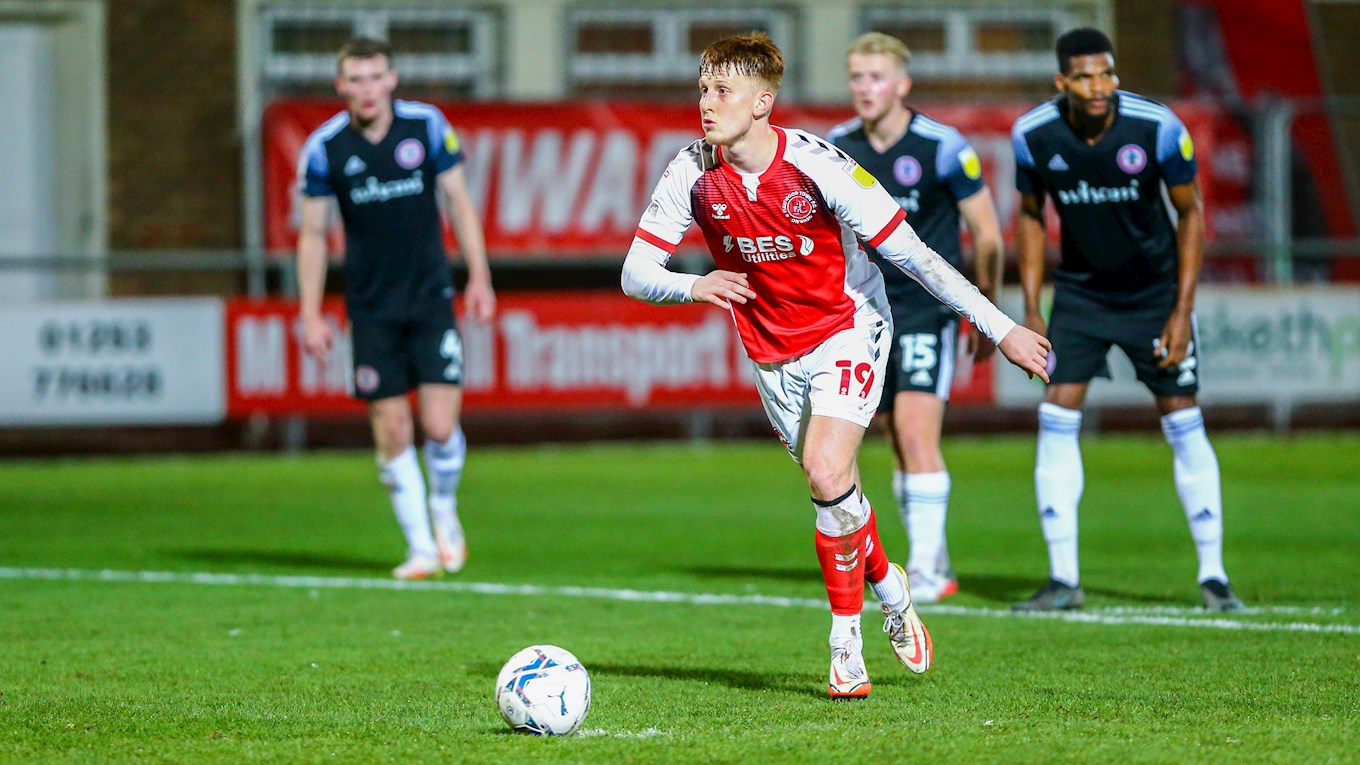 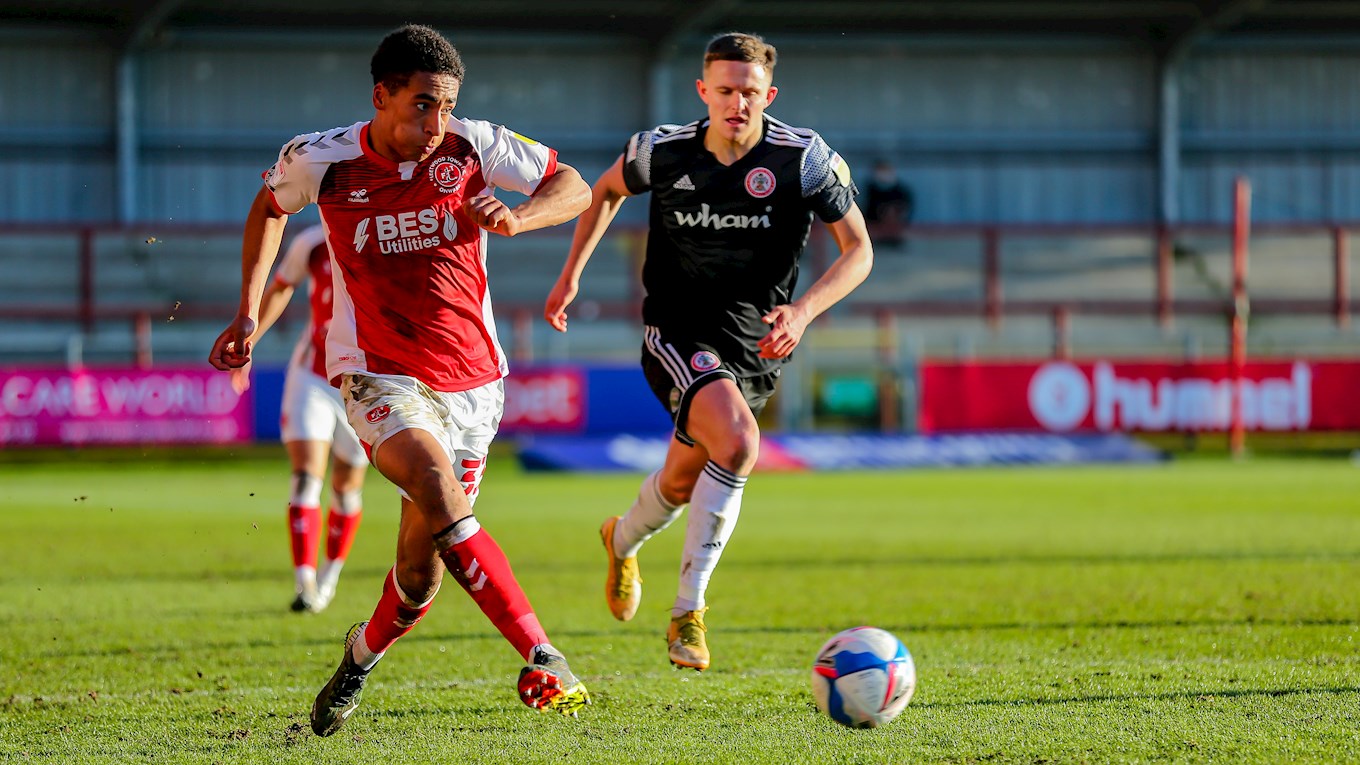 Head Coach Stephen Crainey spoke to the press on Thursday afternoon ahead of his side’s league fixture against Accrington Stanley at Highbury. Here is what he had to say in his interview:

“Every game in League One is tough and Saturday is going to be no different, regardless of what form they’ve had away from home. We know what they are all about as they are a physical side and will test anyone in that department, we are expecting them to do the same as us.

“Hopefully, our footballing quality will come through as we watched their last game against Wigan, and they were unlucky in that.

“I thought they passed the ball around well throughout the game so they’ve got both sides to their play and have players that can hurt you, so we need to make sure we are on our toes from the start of the game and make sure that we are fully prepared for the encounter.” 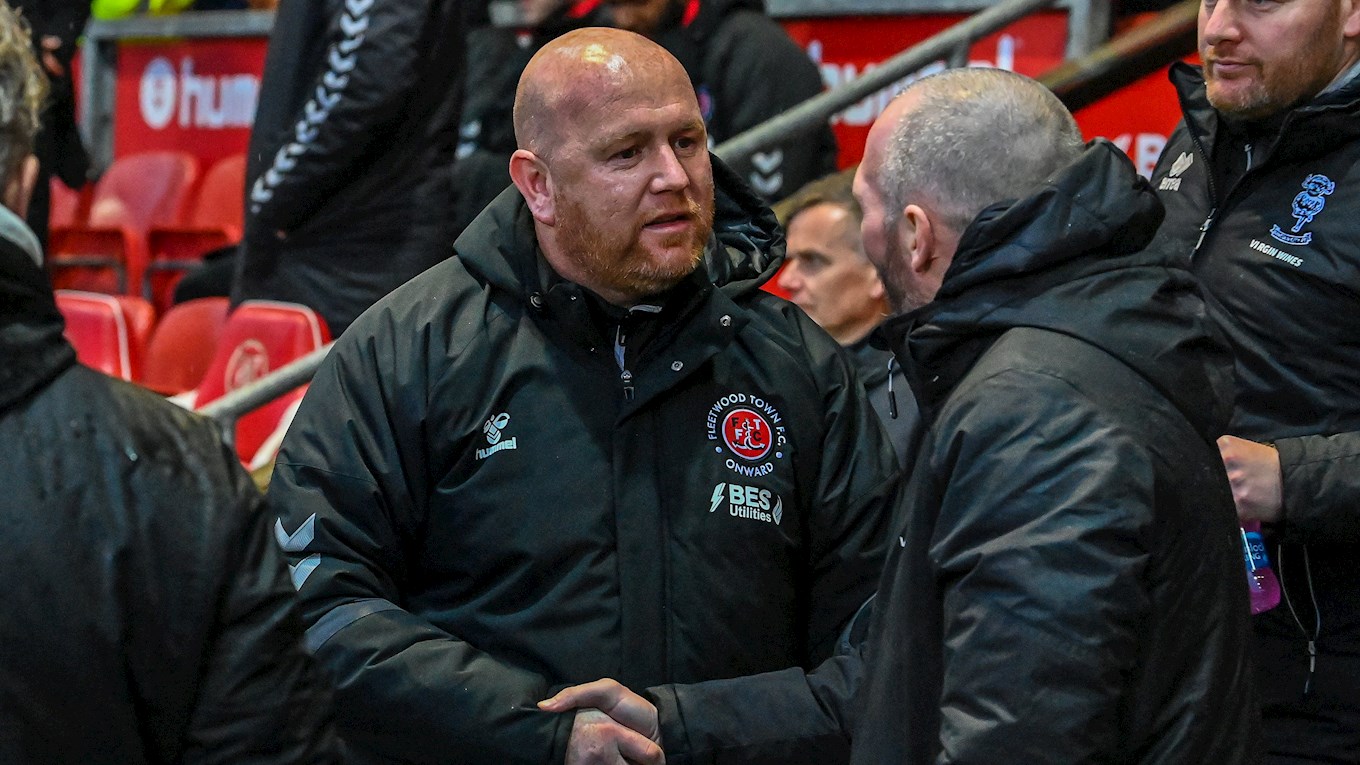 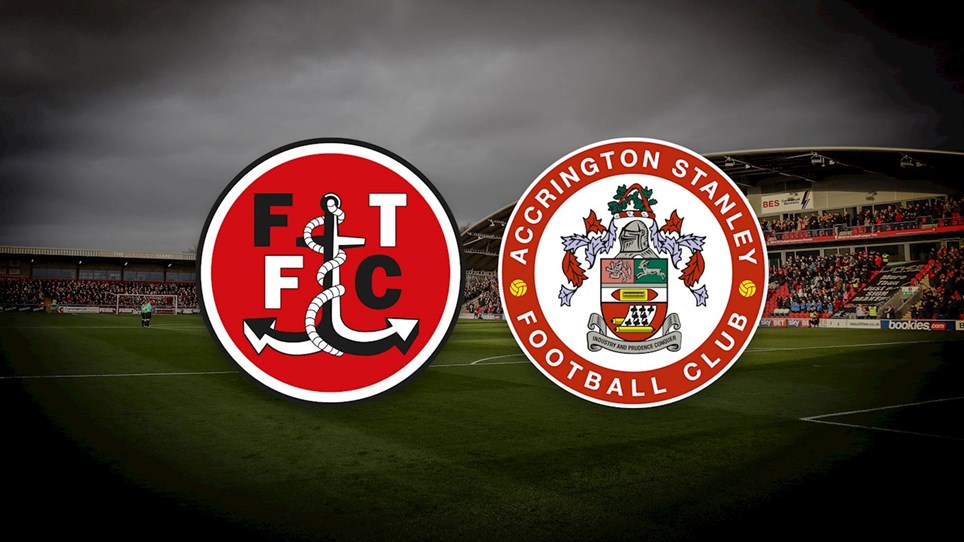 Fleetwood found themselves going into half-time with a 1-0 lead as Ellis Harrison headed home from Dan Batty’s inch-perfect corner minutes before the first 45 came to an end.

After a great start to the second half from Town, Accrington clawed their way back into the game through Sean McConville’s well-taken half-volley. Despite Callum Camps’ best efforts in goal, after Alex Cairns’ red card, he couldn’t keep Michael Nottingham’s injury-time winner out.

Accrington worked the first chance of the game, on the counter and, with the visitors having plenty of attackers forward, it took some brave defending from Callum Johnson, who put his body on the line to stop the shot on target.

A few minutes later, Cairns was called into action for the first time of the afternoon as he had to get down low to deny Tommy Leigh from opening the scoring.

Paddy Lane tried to be the difference-maker as he connected well with a volley 30-yards out, but the winger’s audacious effort was always rising.

Colby Bishop was the next man to attempt a half-volley, he found himself just to the right of the six-yard box, but his powerful effort went just wide of the post.

Accrington’s captain, McConville tried to redirect a pull back from the by-line goalwards, but his fancy flick could only steer it wide of the mark.

After a great first touch from Anthony Pilkington and a cheeky nutmeg, Fleetwood looked to be on a promising counter-attack until Jay Rich-Baghuelou brought down the Town forward for a free-kick and escaped any further punishment.

Cairns took his time picking the perfect pass, which Harrison flicked on behind the away side’s defensive line for Pilkington to run onto, but the number 11 was put under immense pressure from Accrington’s goalkeeper, Toby Savin, and could only place it inches wide of the post.

Both teams fought hard in the latter stages of the first half, but either side failed to create any threatening chances, with the closest being a long-range effort from Ethan Hamilton. A moment of confusion between Cairns and his defenders inside the home side’s box provided a brief scare but it was dealt with eventually.

Just as injury-time was about to be announced, a great corner from Batty found Harrison waiting patiently at the far post, as he rose highest of anyone inside the box and was rewarded for his efforts as he headed into the back of the net to put Fleetwood 1-0 up just before the break.

It was a great start to the second half from Town as Harrison bared down on goal looking to double his tally for the afternoon until he was brought down inside the box – the referee waved away any appeals. The striker got back to his feet and nearly squeezed it into the near post on his weak foot, but it took a slight deflection into the side netting.

The fine restart continued as a fantastic outside of the foot pass behind the defence from Camps, left Harrison with only the keeper to beat and he did so with ease. The forward tried passing it into the empty net but one of Accrington’s many players running back managed to clear it off the line.

Fleetwood suffered a period of pressure from the visitors around the hour mark which they couldn’t see through, despite several impressive blocks throughout, McConville placed his half-volley into the bottom left corner.

Harrison just couldn’t find that second goal as despite countless efforts, it just wasn’t falling for him. This time Town’s number nine was played in behind by C.Johnson and he managed to get his effort past the oncoming Savin, but it was once again cleared before it could trickle into the goal.

And again, the striker had only Savin to beat after a fabulous pass from Lane, but this time Harrison dragged his effort wide.

Fleetwood were really pushing for a winner, with just over 15 minutes left, Tom Clarke found himself trying to dribble his way through Accrington’s defence, and he came very close to doing so.

Some more great goalkeeping from Cairns as he rushed out and pressured Bishop and collected the striker’s effort and set Town on the attack once more.

With five minutes left to play, Town went down to 10-men as Cairns misjudged the flight of the ball and deliberately handled the ball outside the box. As all three subs had been made, Camps was the man who went between the sticks for the remainder of the game.

With Camps in goal, he wasn’t able to keep out Nottingham’s last-minute header from a corner which meant the visitors left with all three points.

Tickets are on sale for Fleetwood Town's Sky Bet League One clash against Accrington Stanley on Saturday (3pm kick-off) so why not buy yours today!

Next up for Stephen Crainey and the Cods is a home clash against Stanley at Highbury and they will be in search of three vital points at home. They will need your support - here are the ticket prices for the clash:

Book your seat in hospitality for this Saturday's Sky Bet League One clash against Accrington Stanley at Highbury. Hospitality prices for the game are £65 for adults (Onward Card holders just £55) and £20 for Under-16s with Under-5s going FREE! 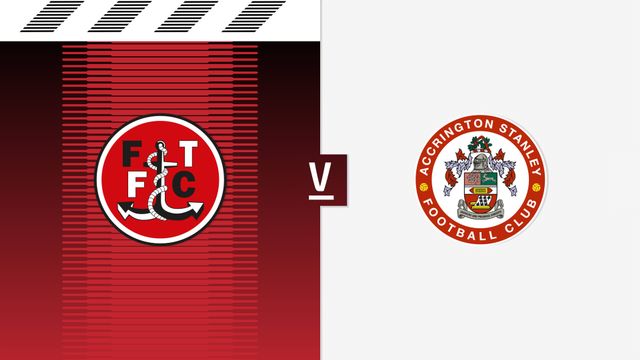 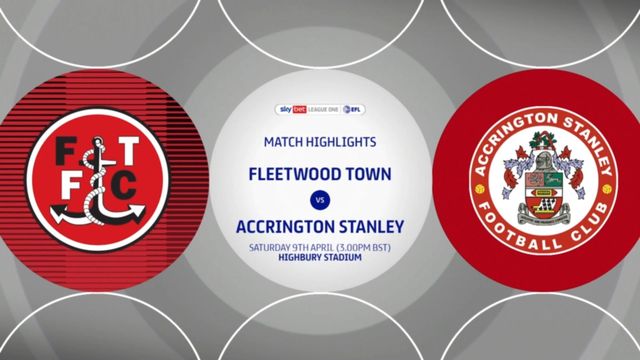 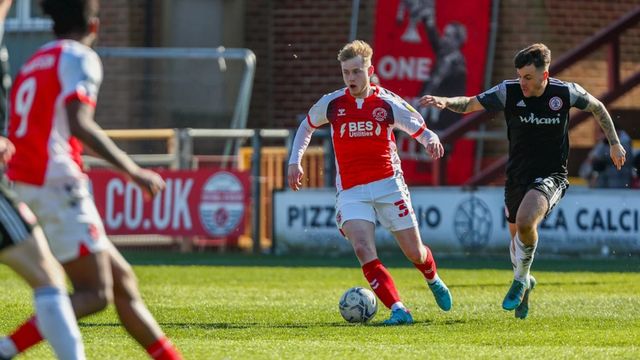