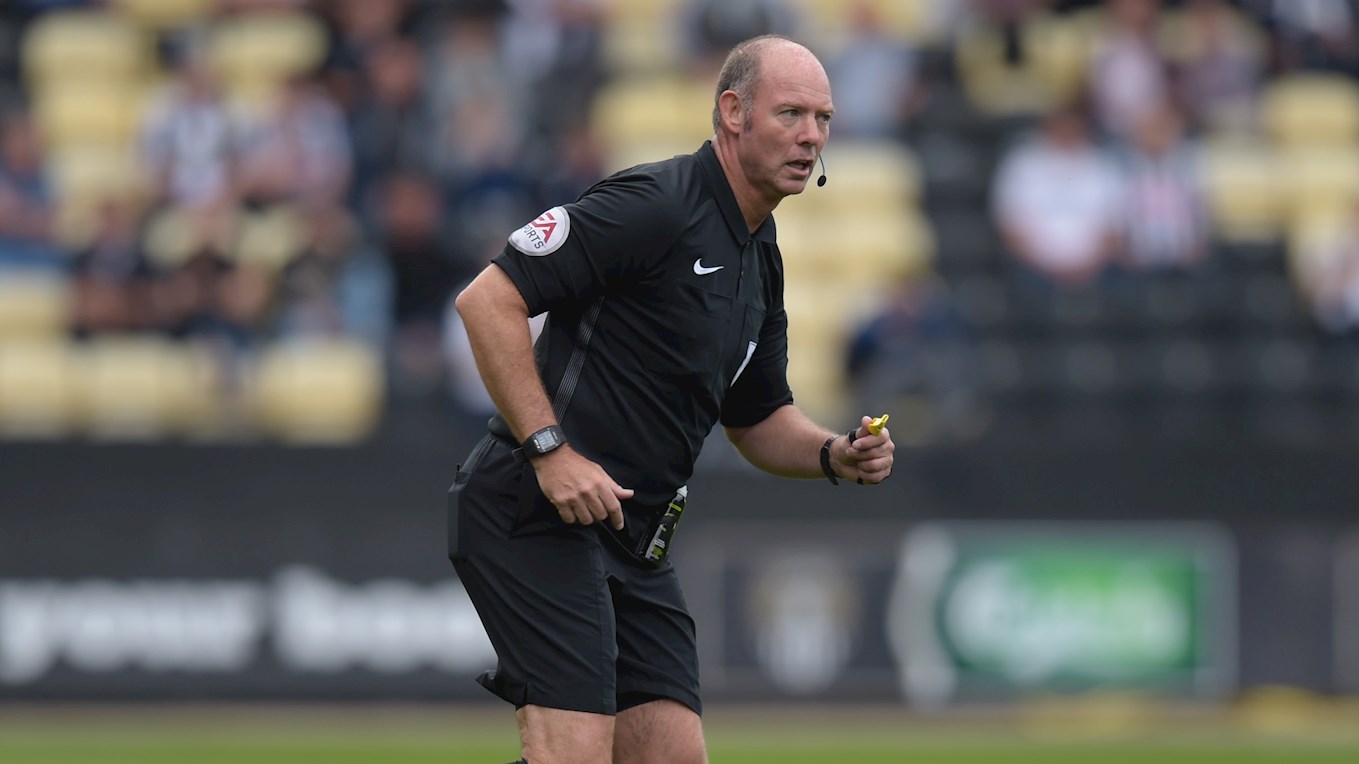 Wednesday night’s game will be Fleetwood’s third and final fixture in the Leasing.com Trophy group stages. Fleetwood will qualify for the knockout stages with a win against Oldham. A draw with a win on penalties will also secure qualification.

Town’s first fixture in this competition was a 2-1 defeat against Group leaders Accrington Stanley, with the second group game against Liverpool Under 21s, which saw Town win 4-3 on penalties to win an extra bonus point, as the sides couldn’t be separated during 90 minutes.

The Cod Army currently sit 5th in Sky Bet League One, and are now in the Second Round of the Emirates FA Cup after their 2-0 win at National League side, Barnet FC on Sunday. Town will travel to Crawley Town in the next round – full details to be announced in due course 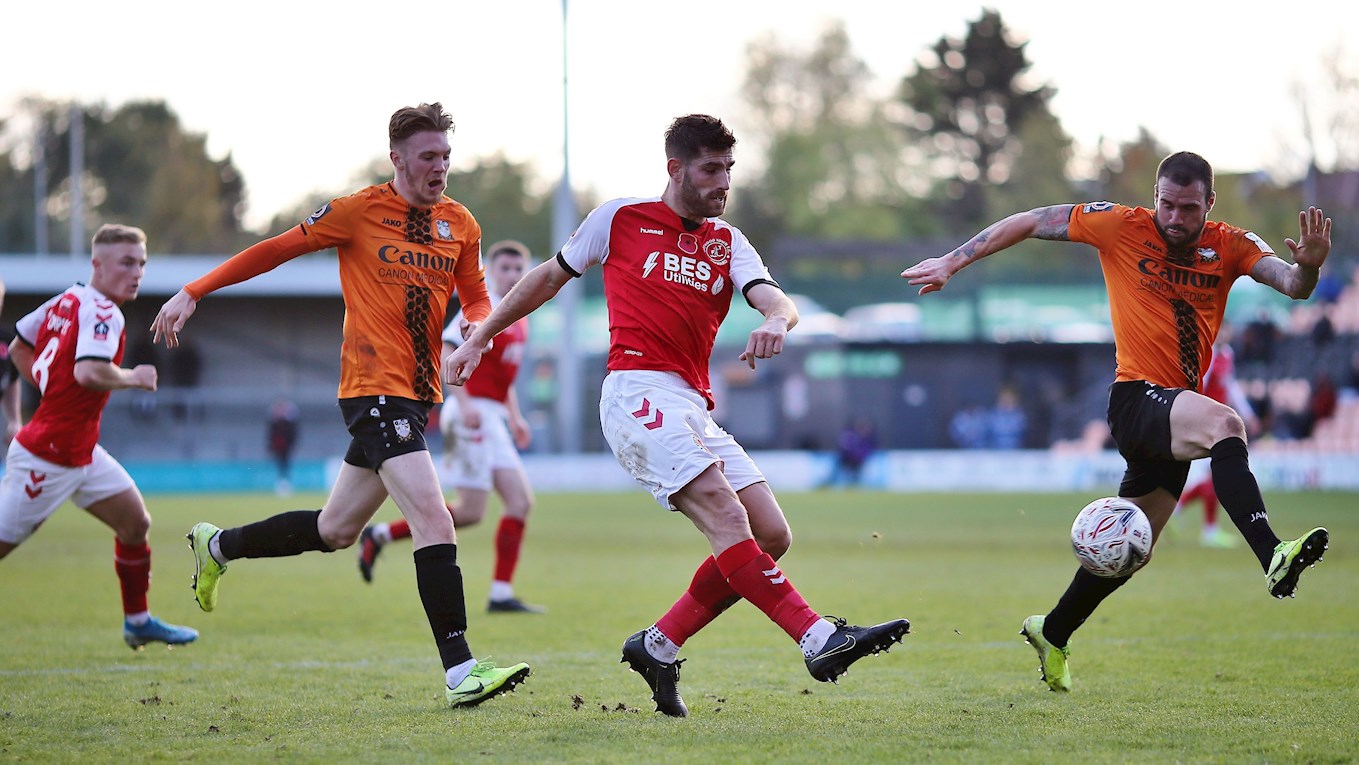 The Latics are 20th in League Two, however they are unbeaten in their last four games, with two wins and two draws. Their most recent league result was a 2-2 draw against Northampton Town.

In their last match, the Latics reached the FA Cup Second Round after defeating Gateshead United 2-1 at the Gateshead International Stadium. Fillipe Morais and Jonny Smith scored the goals to see Oldham now face Salford City or Burton Albion at home in the next round.

In the Leasing.com Trophy, Oldham beat Liverpool Under 21’s 3-2 but lost 3-0 to Accrington Stanley. Oldham are managed by Dino Maamria who took over the reigns in September. 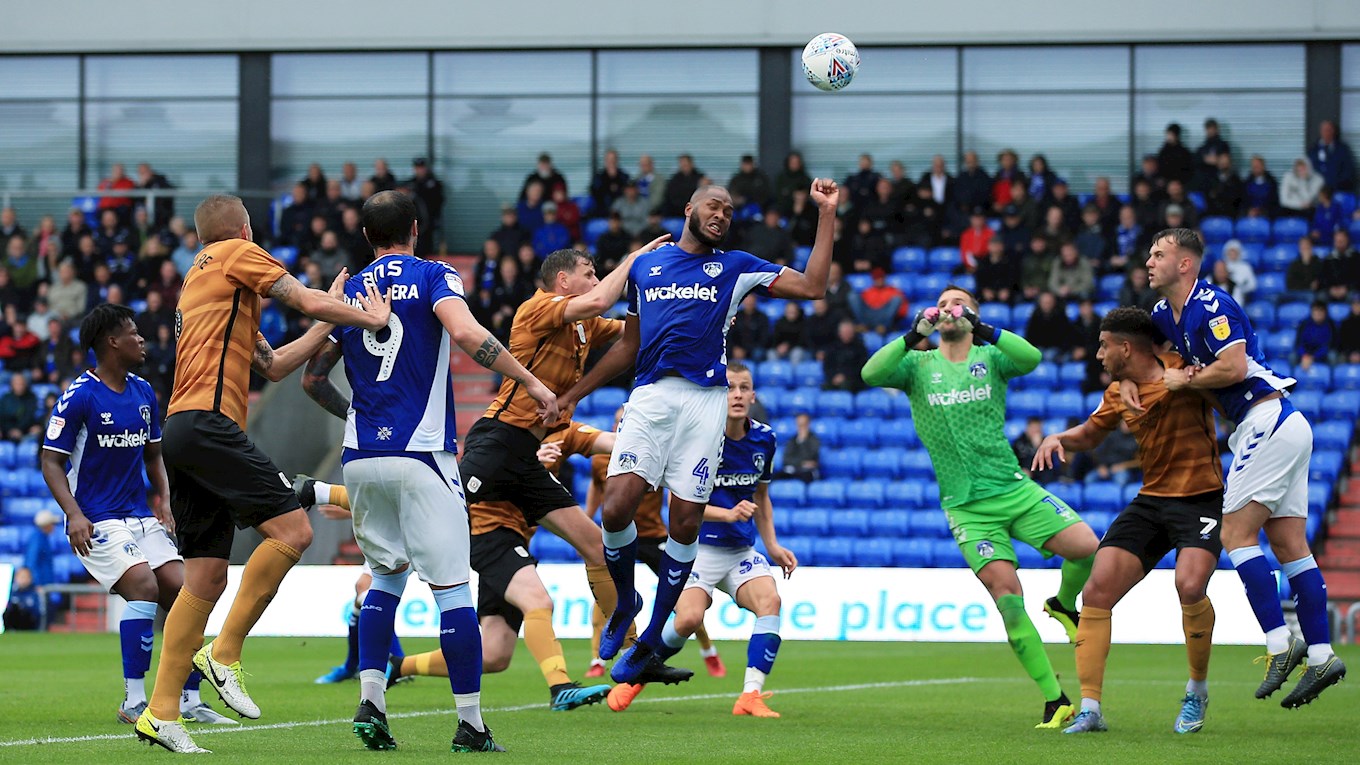 The last time Fleetwood met Oldham was in the 2017/18 season in Sky Bet League One as Town took home the three points. The Cod Army won 2-1 at Boundary Park, with Devante Cole and Ashley Hunter scoring second half goals. 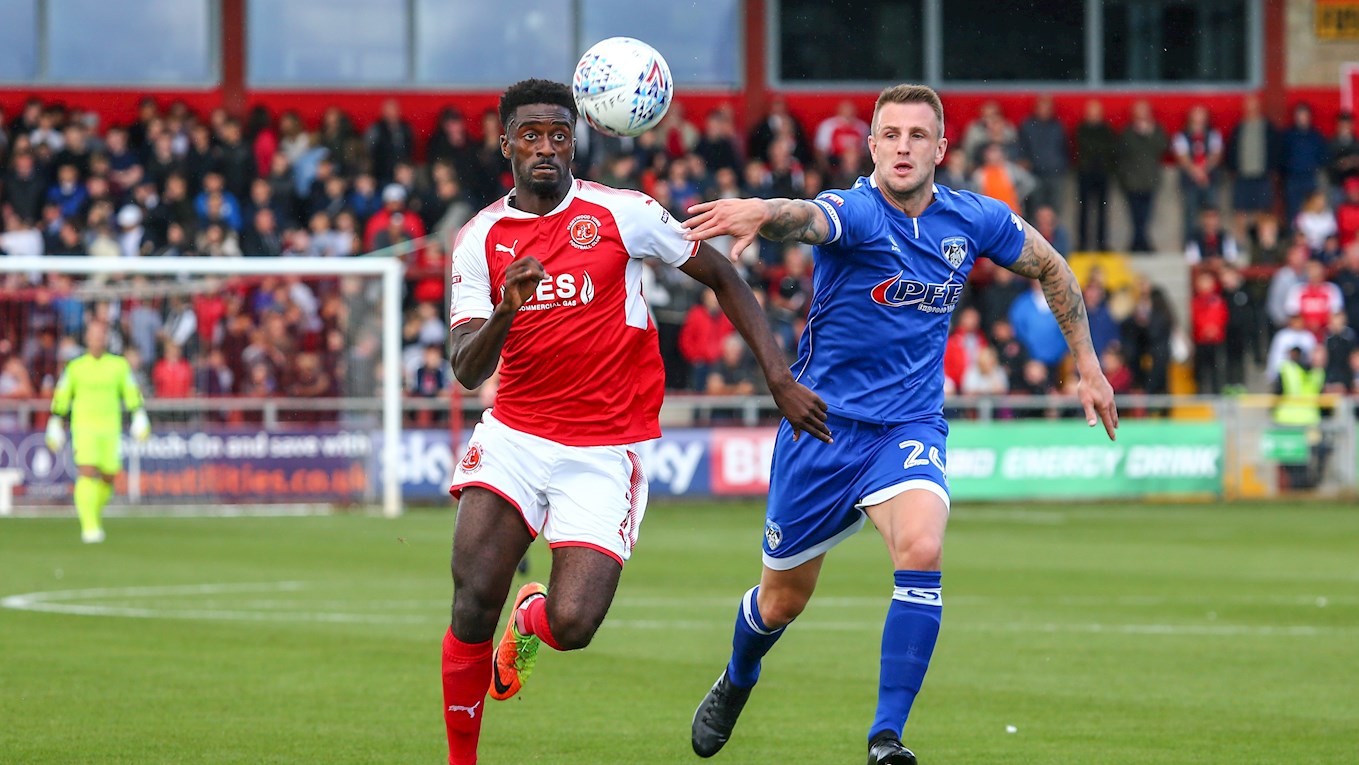 ONE TO WATCH: JONNY SMITH

Jonny Smith signed for Oldham on a season-long loan from Bristol City in September.

The 22-year-old winger has been in good form for Oldham, and has three goals in 11 games so far this season.

Smith - who was born in Liverpool - began his career at Wrexham before moving to Bristol City in May 2016. He has had loan spells at Cheltenham Town, AFC Fylde and most recently Tranmere Rovers.

For Fylde, Smith scored 10 goals in 47 appearances in the National League and last season, he scored five goals in 40 appearances for Tranmere in League Two. 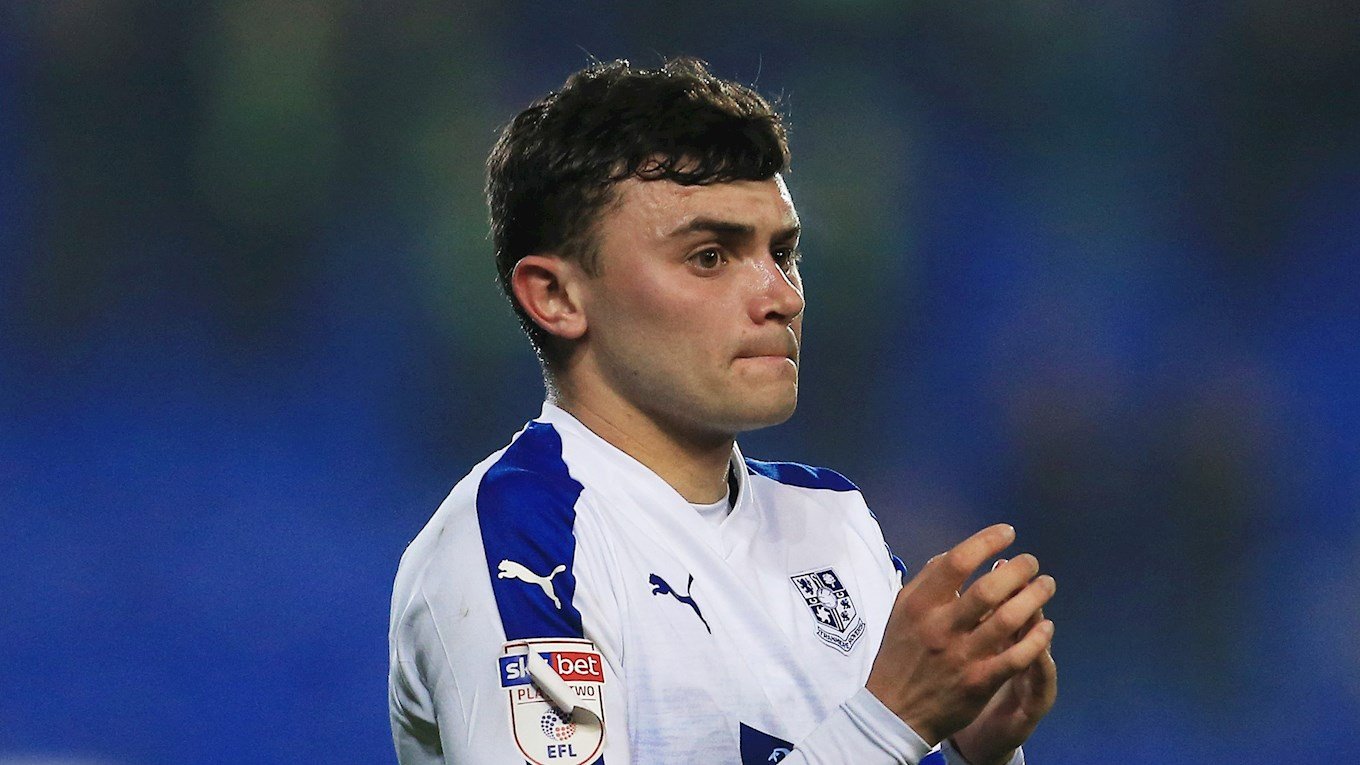 WHAT PETER CLARKE HAD TO SAY…

“Anytime you come up against a former club, it’s always a game you look forward to. It’s one that I’m certainly looking forward to and it’s one we want to win, we need to win to progress in the competition.

“They’ve [Oldham Athletic] changed from my time there. Looking back 12 months ago we had a really apable squad, a strong squad. Through the course of the season for various reasons, the group of players moved on. Even since the end of the last campaign, there has been a lot of outgoings and similar in terms of the incomings.

“Personally I don’t know all of the players they’ve got there, but they’ll certainly pose threats up front and in the wide areas. We’ve got threats of our own that we will aim to utilise to give ourselves the best chance of winning.” 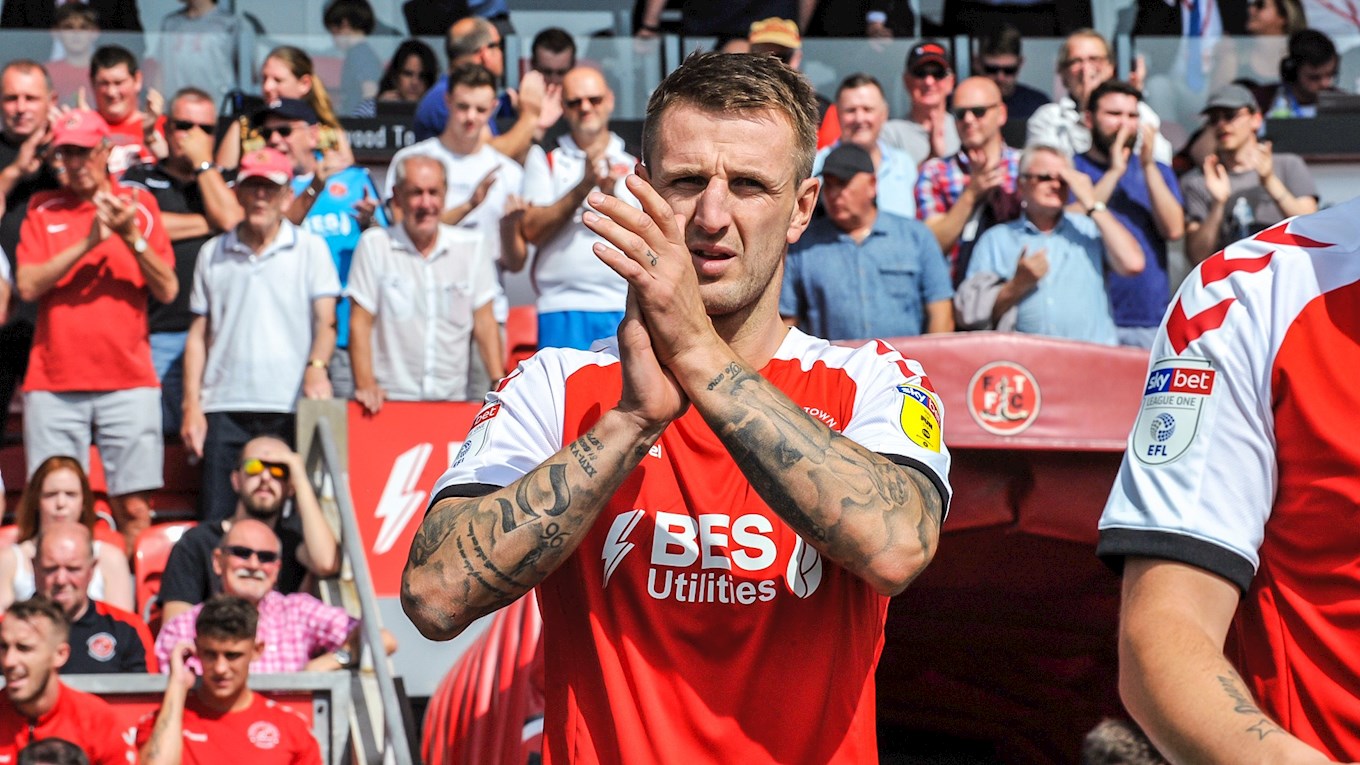 Tickets for Wednesday’s match against Oldham are still on sale, and supporters can purchase theirs at the club shop at Highbury, or by heading over to the online ticket page.

Here are the ticket prices for the game:

For more details on tickets, visit the ticket office at Highbury, or call 01253 775080. You can also buy your tickets online - saving you time ahead of the match. 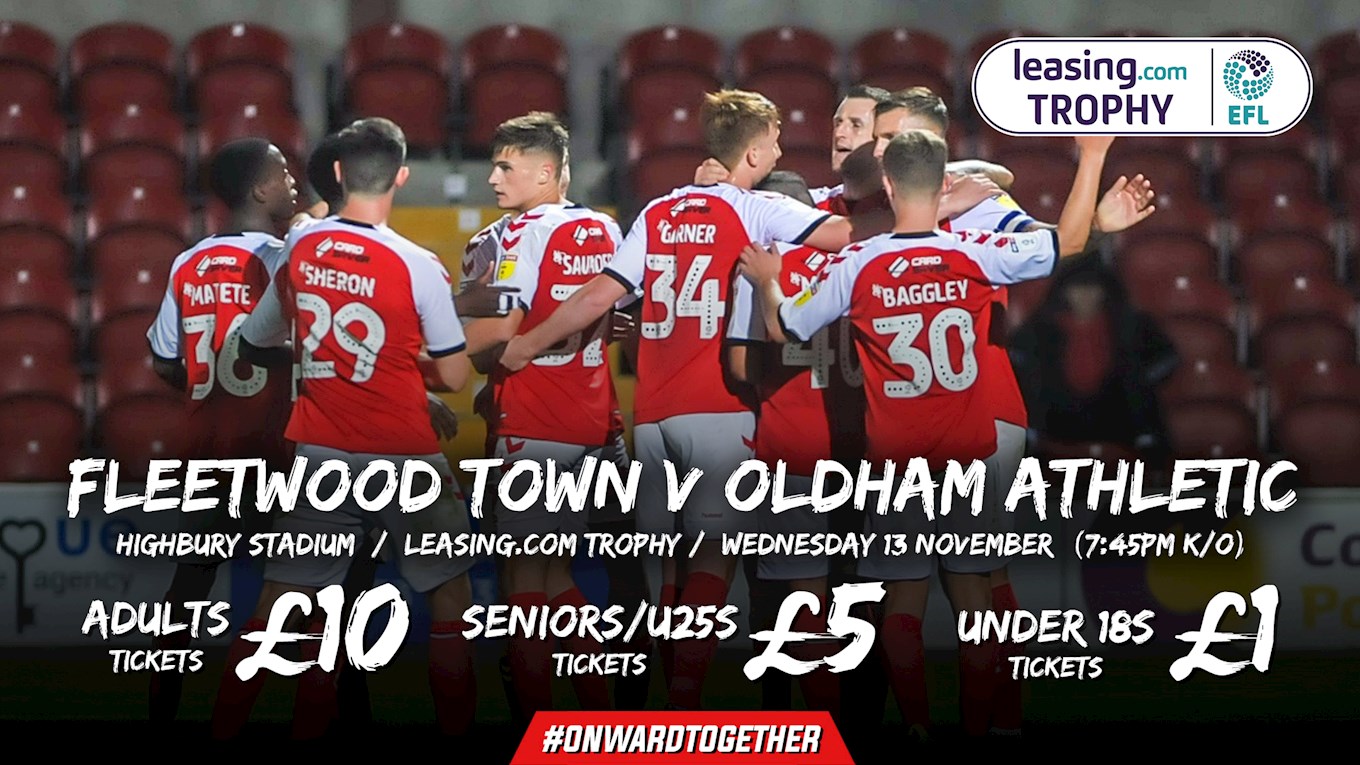 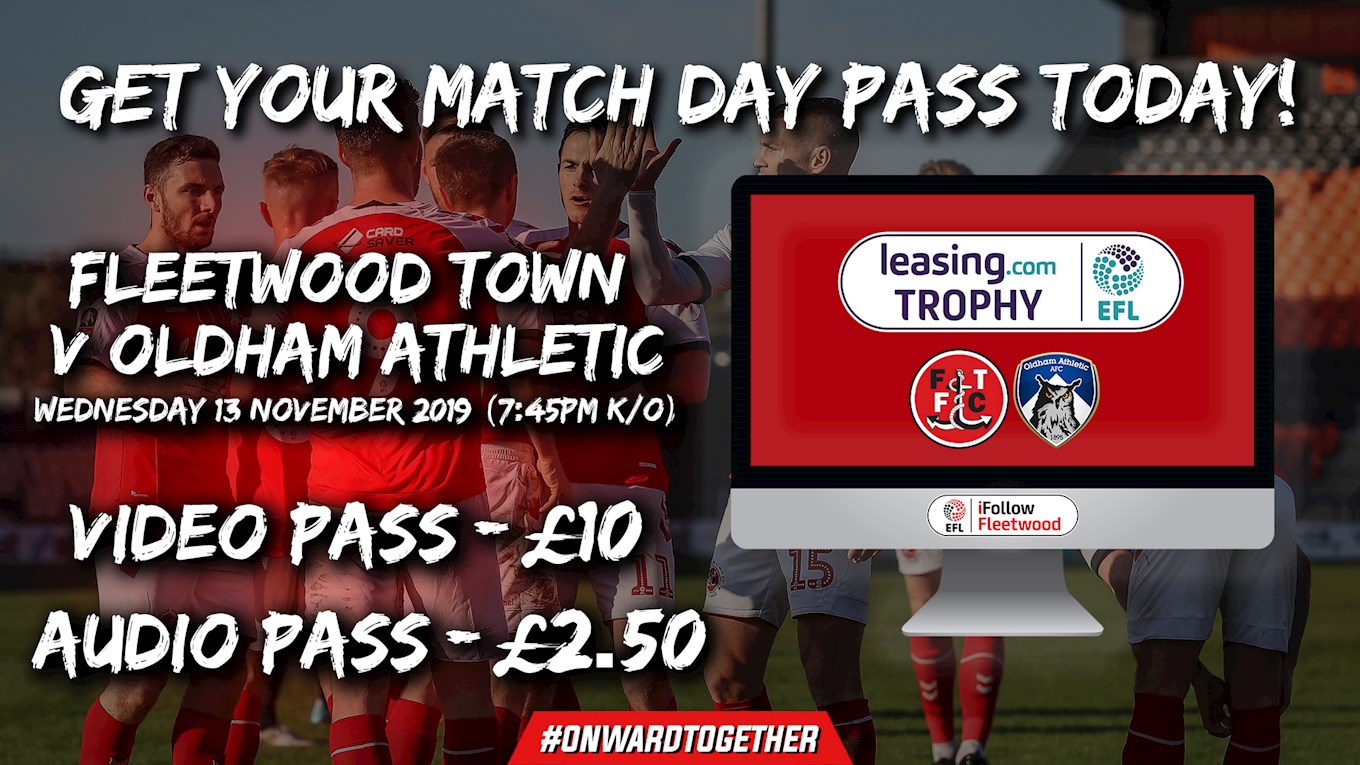 Fleetwood Town are odds on to win the game against Oldham (8/15), with a draw on the evening – meaning it will go to penalties – being 3/1.

For the visitors to win on the road in the competition, the odds are 4/1.

Our betting partners have a selection of special bets, and for Fleetwood to win, both teams to score, 4+ corners each team and 20+ booking points each team, the odds are 22/1.

You can find more odds on the SkyBet website. Please bet and gamble responsibly.

Fleetwood Town are through to the knockout stages of the Leasing.com Trophy after beating Oldham Athletic 5-2 at Highbury on Wednesday night.

The five star showing from Fleetwood saw five different goal scorers in the match, with Peter Clarke, Josh Morris, Jack Sowerby, Wes Burns and Paddy Madden all finding the back of the net.

Oldham netted one in each half, with Jonny Smith scoring from 30-yards out, and substitute Desire Segbe Azankpo bagging his side's second from close range.

There was also a moment of history at Highbury Stadium, as Cian Hayes became the club's youngest ever played, aged just 16 years and 145 days. He lit up Highbury with a dazzling second half cameo, and was unlucky to not score on his debut.

The match began with good play on the far side by Burns, who fired in a low cross which was cleared only as far as Madden. His attempted shot was slightly ambitious, and out it went for a goal kick.

From the first set piece of the night, a corner was whipped in by Kyle Dempsey and it was headed home by captain Clarke against his former club. This was the first of three in the opening 15 minutes.

The lead was doubled just two minutes later, as the hosts drove forwards from midfield, before Dempsey played in Morris, who calmly finished past the Latics goalkeeper.

Town were looking good in all areas of the pitch, and through patient build up play, Sowerby made it three with his long range effort. The midfielder did brilliantly to find a yard of space before hitting a low driven shot into the far corner.

As Oldham slowly started to show signs of their attacking threats, Smith got one back for the visitors as his shot from distance fired past Alex Cairns in the Fleetwood goal.

Joey Barton side weren’t settling for the lead, and when Madden picked out Burns on the counter attack, the Welshman made it 4-1 after a lovely finish inside the box – the first goal for Burns this season.

The second half began brightly for Oldham, and when Smith ran to the byline and had an attempt for his second of the match, but his effort crashed against the post and out for a goal kick.

It did not take long for Town to resume order, as Madden got on the end of a loose ball from an attempted clearance to fire in Fleetwood’s fifth of the evening.

It could have been six just shy of the hour mark, as Dempsey - who assisted Town’s first two goals - clipped the top of the crossbar with a shot from 25 yards.

Moments after, there was another chance for a Town goal. Morris found himself one-on-one with De La Paz, but the keeper pulled off a great double save to deny the midfielder’s second of the game.

At this point, Town continued to dominate the match, and had two more attempts in quick succession. Andrew tried his luck from range, before Madden went through on goal, only to see his shot pulled wide past the far post.

As the game entered the final 20 minutes, the Latics pulled one back through Azankpo. With the ball bouncing around the penalty area, the striker got the all important last touch to guide it past the goal line.

Hayes then replaced Morris to make his debut for the club, and become Town’s youngster ever player. After impressing with Simon Wiles’ Under 18s, Hayes was straight into the action and after beating two players with his trickery, he pulled the ball back to Burns, who then forced the keeper to make a save.

Moments later, Hayes was on a free-kick 20-yards from goal. His in-swinging shot looked to be heading into the top corner, only to be plucked out of the air by De La Paz.

The referee brought proceedings to an end, and with a professional display from Barton’s team, they will now march on into the knockout stages of the Leasing.com Trophy.

The draw for the knockout stages will take place this Saturday on Sky Sports’ Gillette Soccer Saturday at 2pm. With Town finishing second in their group behind Accrington Stanley, they will have an away leg against another Northern based side.

The Cod Army will qualify for the knockout stages of the competition if they pick up all three points against Dino Maamria's Latics, and you can be there on the night for as little as £10.

Joey Barton’s side will also qualify on the night if the match is drawn, and Town go on to pick up the extra point in the penalty shootout.

Tickets for Wednesday's match can be purchased online HERE.