Joey Barton and his side travel to the North East this weekend to face Sunderland in Sky Bet League One.

Fleetwood Town are unbeaten on the road this season, and will look to continue that run at the Stadium of Light. With wins away against Oxford and Scunthorpe, and a draw at Charlton, the Cod Army are enjoying life on the road.

Town won their last game 2-1 against Bradford City, with Ched Evans scoring his fifth goal in six league matches. Ash Hunter scored the winner in the second half to give ten men of Town all three points at Highbury.

Joey Barton was on press duty at Poolfoot Farm on Thursday morning and spoke about the challenge ahead for his side, the connections with Newcastle United, and much more. 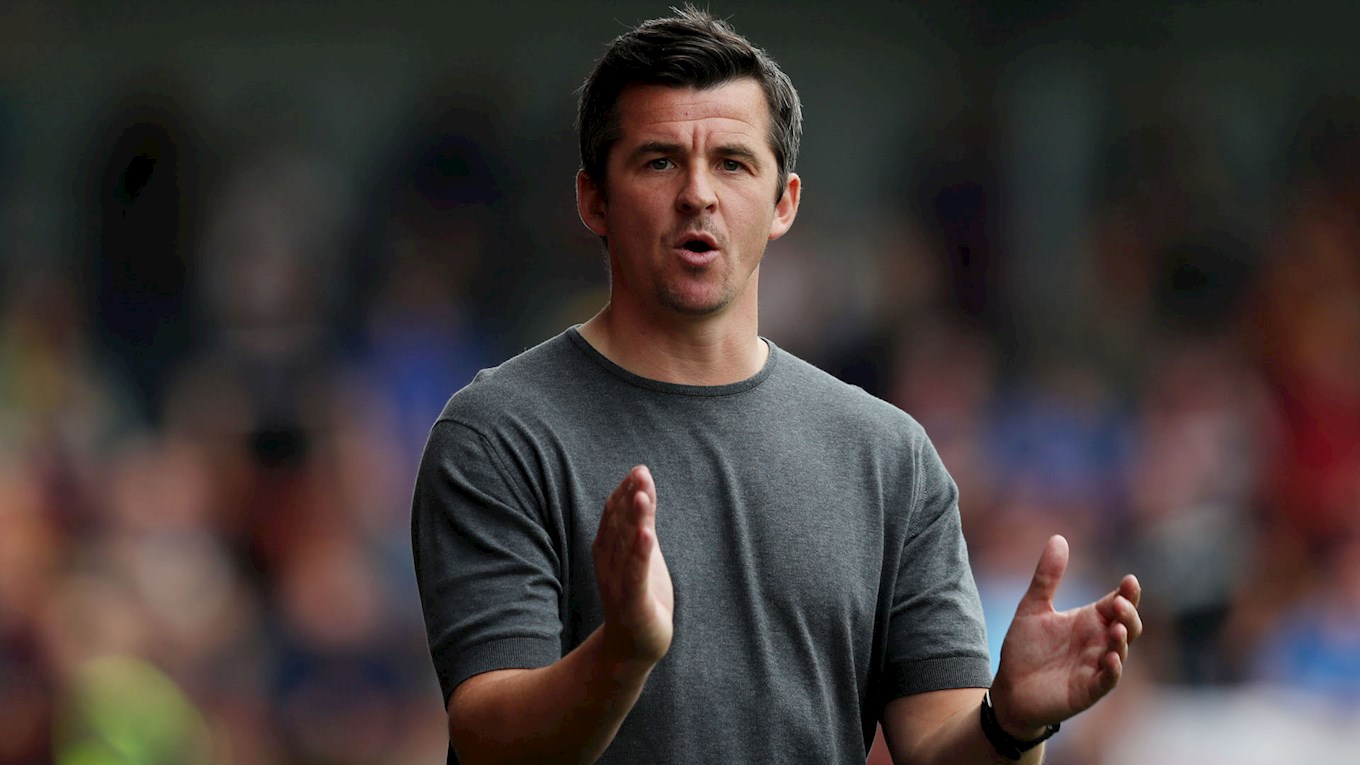 “Saturday will be a very proud moment for this football club, and if you asked Andy Pilley when he started his journey with this football club as Chairman if he would be coming up against Sunderland in front of thirty odd thousand fans, he’d have told you that you were mad!

“When you look at where Fleetwood have come from and how they are progressing still, because there still is a gap between ourselves and Sunderland in size and structure; we will be going there in form, and I honestly believe we aren’t a million miles away from them as a team.

“For me it’s another game and as a player, I played in big derby matches and one was against Sunderland and I just see the three points on the line. Just like it was against Bradford last Saturday.”

“I don’t know how Fleetwood will set up because we have already seen teams approach games in different ways at the Stadium of Light.

“Oxford were very aggressive in how they pressed and approached the game high up the pitch. The pleasing thing is we have reacted well in every game, naturally though we would like to go ahead in games and stay ahead.

“In terms of our preparation, we can’t always say for certain how a team will shape up. What I can say though, is if they approach it the same way Oxford did, then we will be better prepared than we were last weekend.” 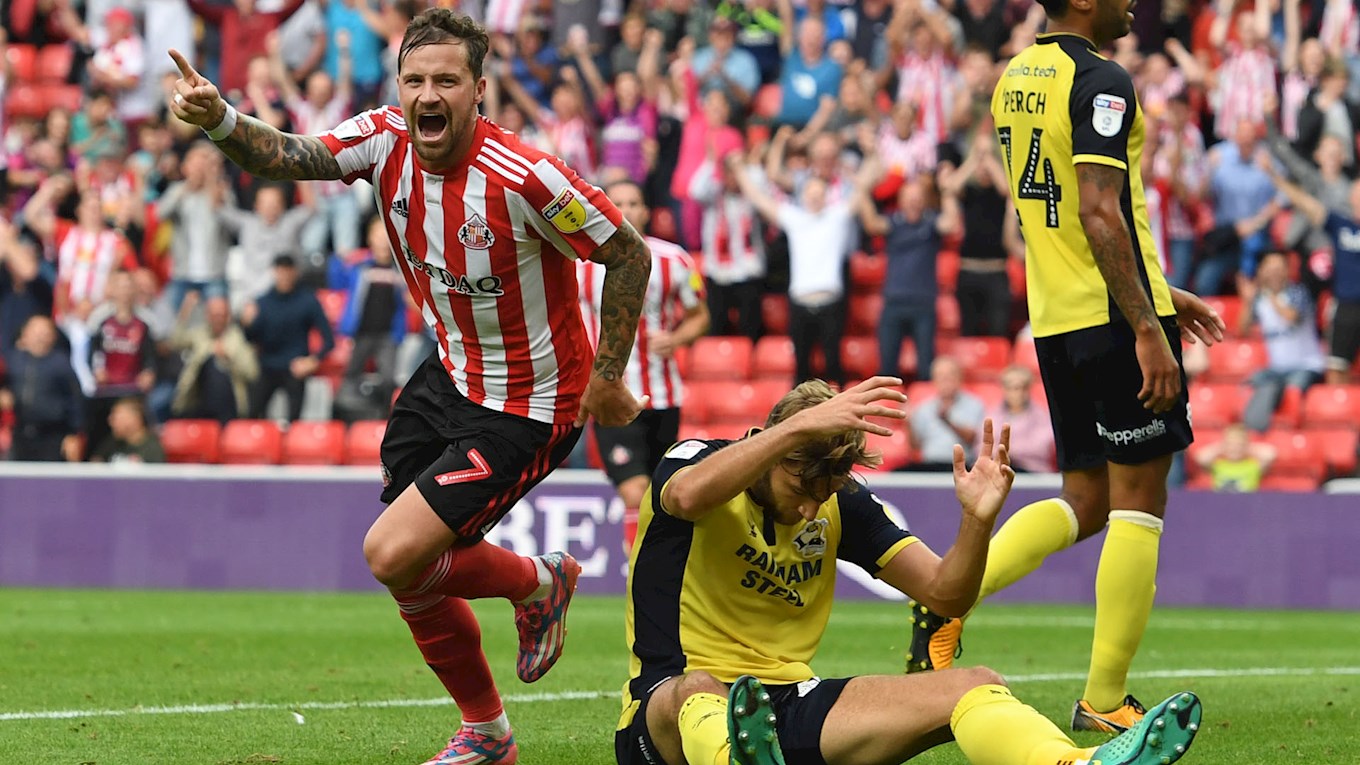 Chris Maguire is the man to watch for Sunderland when Fleetwood Town make the trip up to the North East. The attacking midfielder joined the Black Cats in the summer from Bury, who were relegated to League Two.

The 29-year-old started off his career at Aberdeen, in their Academy set-up, and was later loaned out to fellow Scottish team Kilmarnock. Derby County came calling for the youngster in June 2011, and paid £400,000 to for the midfielder.

Maguire – who scored two goals so far this season against Scunthorpe and Gillingham – has played plenty of his football in the English leagues with spells at Portsmouth, Sheffield Wednesday, Coventry City, Rotherham and Oxford United.

It was at Oxford where he produced his best form, and in the 2016/17 season, Maguire scored 17 goals and managed12 assists. He became a fans favourite in Oxfordshire, having helped the club gain promotion in the previous season. 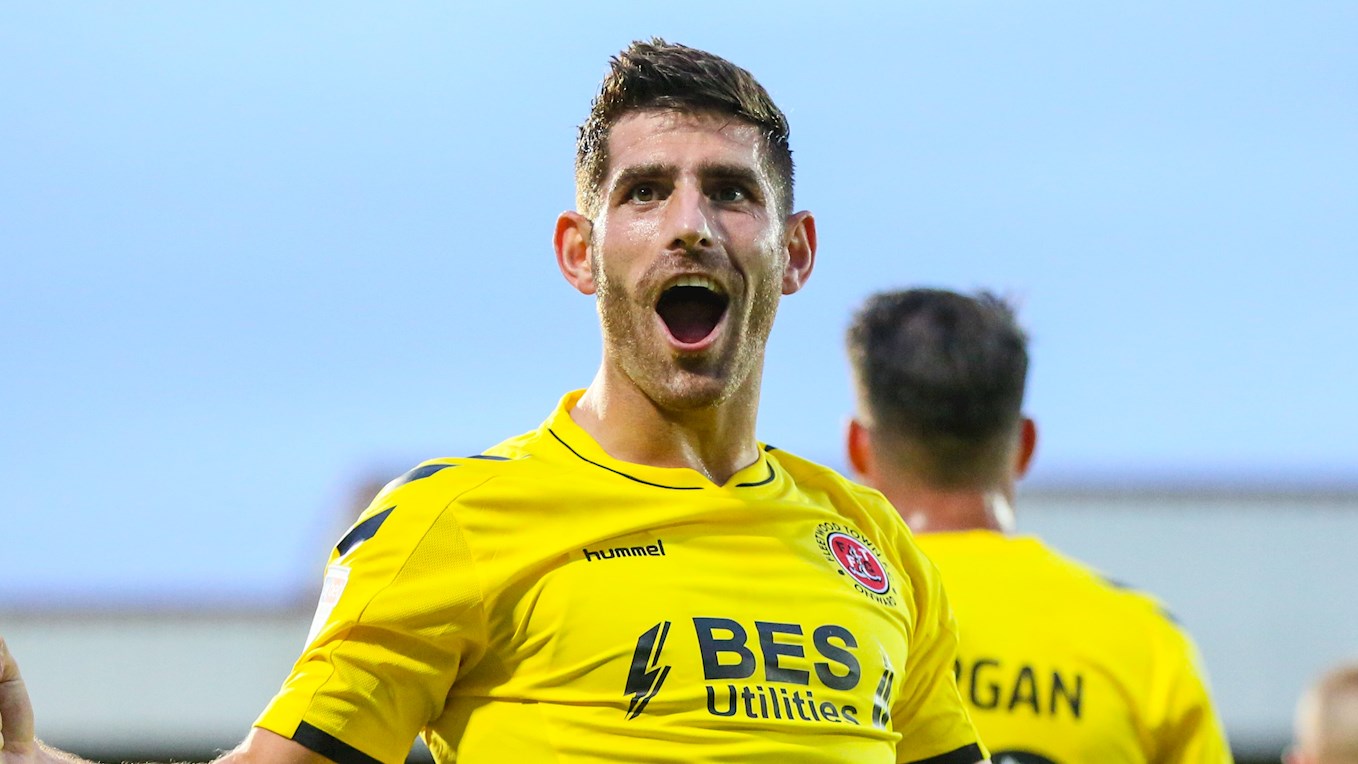 Jack Ross’ Sunderland are favourites to take all three points at the Stadium of Light with odds at 17/20.

For Fleetwood to win at Sunderland, and for both teams to score is priced at 15/2.

Town’s leading goalscorer Ched Evans opened the scoring last weekend against Bradford City, and for the Welshman to do the same this week, the odds are 6/1. 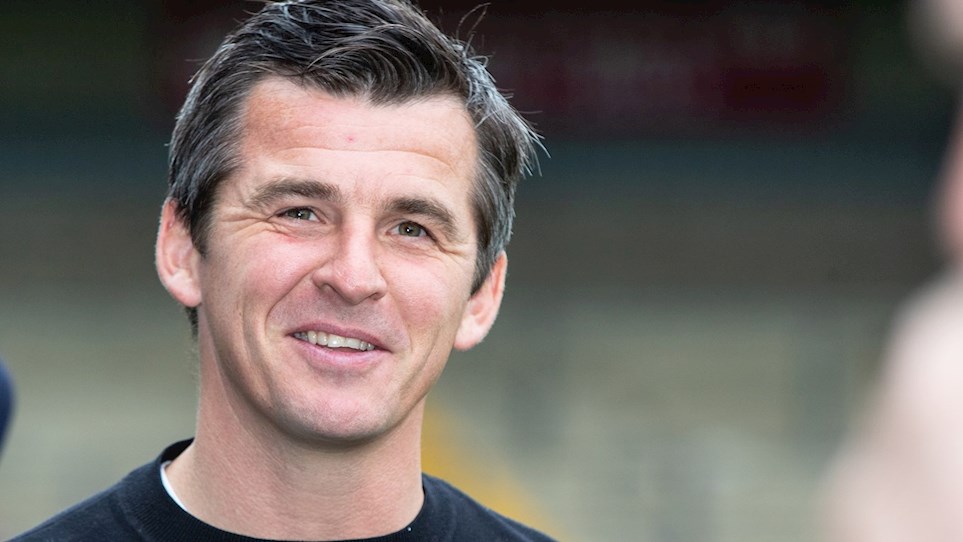 Barton: On the pitch, there will be no David versus Goliath


Joey Barton has spoken to the press ahead of Saturday’s trip to the Stadium of Light where Fleetwood Town will face former Premier League side Sunderland.

Fleetwood Town extended their unbeaten record in Sky Bet League One to six games after a 1-1 draw at Sunderland on Saturday.

Paddy Madden opened the scoring for the away side after Ash Hunter’s out-swinging corner found the Irishman inside the box after ten minutes. However, just before the half-time whistle, Josh Maja’s header found the back of the net to take the teams in level after the opening 45 minutes.

Madden had a chance to seal the points for the Cod Army, but home keeper Jon McLaughlin saved his second half penalty.

Head coach Joey Barton made just the one change to the side that started last week at home to Bradford City, with Conor McAleny replacing the suspended Wes Burns.

Sunderland started the game off the better side and went close only two minutes after the referee’s whistle. The ball was well worked on the left flank before being crossed into the box. Lynden Gooch was unmarked at the back post, but he shot wide.

Ash Hunter was lively and nearly helped the Cod Army take upper hand after the winger had the full-back on toast inside the Black Cats’ box, however his cross to Ched Evans had just too much on it for him to convert his chance on goal.

Town took the lead through Madden nine minutes into the match as he headed the ball home from close range. Hunter took the corner on the right, he whipped it into the box for the Irishman to nod it past McLaughlin between the sticks.

Evans should have made it two nil after Madden delivered a peach of a cross to the Welshman. James Husband did ever so well to pick out Madden, who had the composure to knock it back into the danger zone. What a chance for Town to double their lead.

Barton found himself making an early change as skipper Craig Morgan limped off with an injury. Tommy Spurr made way onto the pitch alongside Eastham at the back.

Maja equalised for the home side five minutes before the break. Gooch got to the by-line on the left wing, he chipped it into the near post and Maja was there to glace his header across Alex Cairns, onto the post, and into the net.

Fleetwood started off the second half bright and won themselves a penalty just two minutes in. Husband was fouled into the box and it was Madden – who scored in the first half – who stepped up and saw his shot saves from 12-yards out. A glorious chance for Town to take the lead for the second time.

Moments later, and after quick thinking on a free-kick, Marney played in Evans who had the goal glaring in front of him, sent his shot wide of the goal. A number of chances have fallen the Cod Army’s way, but they have failed to capitalise on their openings.

Jack Baldwin missed a sitter from just two-yards out. The winger did well to worm his way into the box after Gooch’s powerful run on the wing. The ball came in and it looked goal bound, but then over for Baldwin to side foot his shot high and wide.

The game seemed to settle down with just over 20 minutes left of the ninety, but the fans from both sides pushed their team on to get that goal that probably would be the winner at the Stadium of Light.

A hero was needed at the death when Sunderland were pressing to get the winner in front of their home fans. After Wyke’s header from five-yards and the crowd out of their seats, Cairns crawled the ball from behind him, on the goal line to deny the Black Cats, but that wasn’t it. Gooch was on the follow up and went near post with his shot, and again Town’s number one saved with his feet.

Both teams went all out in the remaining minutes left, but a draw is what either side will take away with them.

Barton: On the pitch, there will be no David versus Goliath


Joey Barton has spoken to the press ahead of Saturday’s trip to the Stadium of Light where Fleetwood Town will face former Premier League side Sunderland.

We're less than a week away from our trip to Sunderland, with a superb offer still available for Onward Card holders.

Sales are going well so far, ahead of facing the former Premier League side, with both teams currently inside the top six in Sky Bet League One.

Match tickets are also available to purchase from the club, with the prices as follows:

Coaches will depart Highbury Stadium at 9:30am and 10:30am. Please state which coach you would like to book on when you contact the ticket office.

To purchase either coach travel or match tickets, visit the club shop at Highbury Stadium, or call 01253 775080.

Haven’t got an Onward Card? Get yours online now by clicking here! 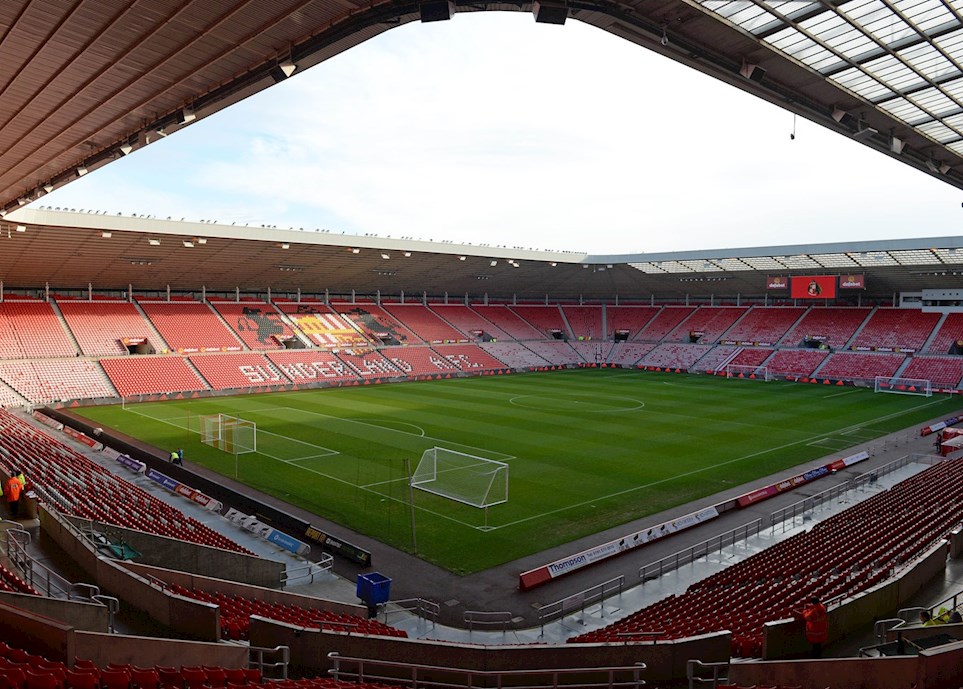 
Fleetwood Town can confirm our Sky Bet League One fixture with Sunderland will go ahead as planned on Saturday 8th September 2018 (3pm).