Fleetwood Town travel to the ABAX Stadium to face second place Peterborough United in the Tuesday night fixture in Sky Bet League One.

Joey Barton’s side are on the road for the second time in three days and will be looking to get back to winning ways against Steve Evans’ Posh. With Peterborough losing 1-0 as well at the weekend, both teams will be wanting to change their run of form around.

Nathan Sheron picked up a red card on Saturday and will miss Tuesday night’s game, so that means that Dean Marney will come back into the fray of things, with Ryan Taylor dropping from midfield to right back. Ched Evans and Kyle Dempsey are two other name back in the starting XI, with Ash Hunter and Wes Burns either side of the club’s top goal scorer.

It was a second half goal from Rhys Bennett that gave second in the table Peterborough all three points on a Tuesday night against Fleetwood Town.

Bennett’s close range header saw Steve Evans’ side claim all the points, despite a dominant second half performance from the Cod Army. Wes Burns and Chris Long went the closest, but it wasn’t to be in the end.

Joey Barton made three changes to the side that started at Fratton Park on Saturday, with Dean Marney, Kyle Dempey and Ched Evans coming into the side. Nathan Sheron (suspended), Jason Holt and Paddy Madden dropped out.

At the start of the match it was rather even with both teaming looking to get the ball down on the deck and pass their way through to goal, but it was Peterborough who had the first open chance in the match.

Jamie Walker was the man with the chance, he found a yard of space just outside the Town 18-yard-box, but he could only see his effort from range sail over the crossbar.

Dempsey looked lively on his return to the starting eleven and had Fleetwood’s best chance midway through the first half. The midfielder drove at the Posh defender and as they backed off, there was only one thing in his mind… shoot! He did that, but just like Walker, he saw his shot fail to hit the target.

Peterborough’s wide man Dembele was the most dangerous player for the home side and he was encouraged by his manager Steve Evans to keep running at the Town full back Lewie Coyle, and when he played a one two with Ivan Toney, he found space inside the penalty area, but once again his shot didn’t make Alex Cairns pull off a save.

Marney went off with five minutes to go until the break with a suspected knee injury, and was replaced by Harrison Biggins in the centre of midfield, but that didn’t affect Town and how they approached the game.

The home side grew in confidence after going a goal ahead and it was Marcus Maddison who worked the ball well on the right wing. The playmaker drifted inside and pulled the trigger, but it was Ash Eastham who threw himself at the ball, and got a block on a shot that looked goal bound.

Barton played his cards with thirty minutes to go in the match with Jason Holt and Chris Long coming on the field of play for Dempsey and Taylor. Could the substitutes make a difference?

Long certainly did that and within five minutes of being on the pitch, he nearly made it level at the ABAX Stadium. The forward did well to get hold of the ball in the box, he shifted the ball to his right and looked to curl it on the floor into the corner, but it was just narrowly wide of causing Chapman problems between the sticks.

Burs went very close to levelling the score after lovely build up play from Evans and Long, and with the goal at his mercy, Chapman was made to pull off a fantastic save. A great opportunity for the away side.

Next up, a Fylde Coast derby with Blackpool on Saturday.

Tickets and travel remain on sale for Fleetwood Town's trip to Peterborough United on Tuesday night.

The Cod Army will be looking to bounce back from Saturday's narrow 1-0 defeat at the hands of league leaders Portsmouth, when they travel to the ABAX Stadium on Tuesday night.

The visiting supporters will be situated in Block A and Block B of The Main North Stand, with prices below:

Ticket prices if bought in advance:

Matchday prices (increase by £2 on the day bar Under 18s):

To purchase either match tickets or coach travel, contact the ticket office on 01253 775080, or visit the club shop at Highbury Stadium. 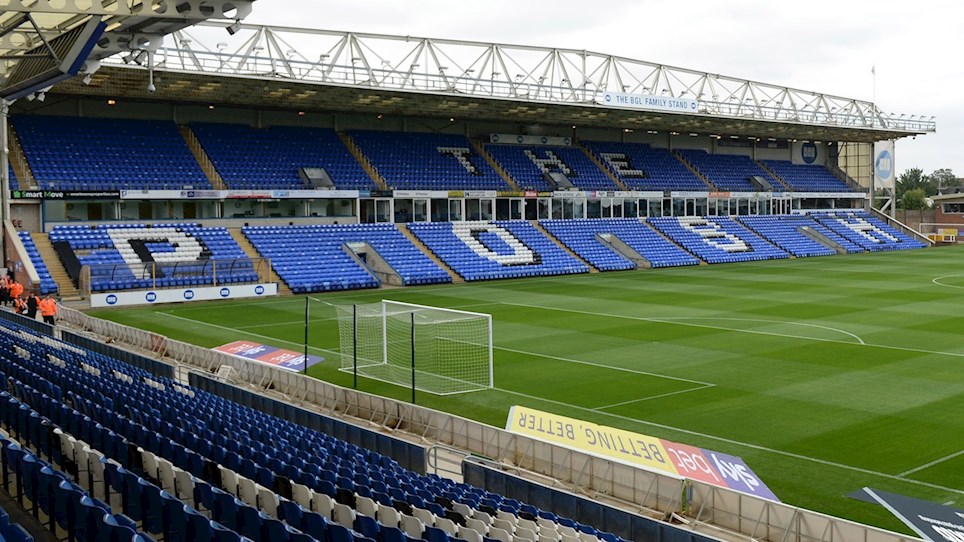 Join the Cod Army at Peterborough United next Tuesday


Ticket and travel is now on sale for Fleetwood Town’s trip to Peterborough United on Tuesday 23rd October.