It’s set to be another exciting weekend of action in Sky Bet League One. Sporting Life’s Tom Carnduff previews the latest round of games.

There’s some daylight starting to appear at the top of the table, with Luton sitting six points clear of second-placed Barnsley.

The Hatters have continued building on the momentum gained from promotion for League Two last season, and they now find themselves as the odds-on favourites with Sky Bet to win the title and secure back-to-back promotions.

They’ll be looking to continue their fine home form when they welcome Wycombe to Kenilworth Road. Luton have won 12 of their 15 games in front of their own supporters this season, drawing the other three.

Meanwhile, Barnsley will be hoping that Wycombe’s recent good form will help them as they look to close that gap above them.

The Tykes face the trip to Gillingham this week, which is set to be a tough test for Daniel Stendel’s side.

Gillingham may have not won their last two home encounters, but they have beaten Premier League Cardiff and league leaders Portsmouth at the Priestfield Stadium in past weeks.

Portsmouth will be wanting to halt a rough patch of form that has seen them drop into the play-off positions, and this week sees them come up against a Plymouth side who have picked up 12 points from their last possible 15.

Kenny Jackett’s men can take confidence in their away form though, with Pompey boasting the best record in the road in England’s third tier.

Elsewhere, Sunderland’s games in hand mean that they could go level with Luton on points if they win those three extra games in their favour.

They still sit in fourth despite playing three games less than those around them. A trip to Oxford awaits this weekend, another team who have been picking up points recently despite their position in the table.

Speaking of games in hand, Doncaster can capitalise on their current position over Peterborough when they welcome Posh to the Keepmoat on Saturday.

Former manager Darren Ferguson, who recently took to the London Road dugout for the third time, will be wanting a play-off finish for his side – but victory for the hosts will see them overtake Peterborough with two games in their favour.

The other side sitting comfortably in the play-offs is Charlton. Lee Bowyer continues to get the best out of his players and they look good value for consecutive top-six finishes.

They welcome mid-table Southend to the Valley next. It won’t be an easy task with the Shrimpers picking up some good away victories in recent weeks, which includes a 4-0 win over Bradford.

The Bantams will hope that they can move out of the relegation zone when they take on Fleetwood.

Joey Barton’s side are stronger at home, although have earned at least a point in their past three away games and they’ll be wanting the same in West Yorkshire.

AFC Wimbledon remain at the bottom of the table, but they can start to move closer to safety if they can earn a win against Burton.

The Brewers have experienced mixed results away from home. That said, they did earn a point away at Doncaster last time they were on the road.

Manager of the Month Stuart McCall will be hoping his side can continue their recent revival as they take on Accrington.

The Iron are unbeaten in their last three games at Glanford Park, which includes a point against Sunderland in their last game there.

Stanley have a decent enough away record though and will be hopeful that they can capitalise on the said ‘curse’ that sometimes comes with the monthly awards.

Shrewsbury proved themselves to be one of the FA Cup’s entertainers in the past month, coming from behind to beat Championship Stoke before scoring two away at high-flying Premier League outfit Wolves.

They’ll be hopeful that they can utilise the confidence gained from that good performance as they take on Bristol Rovers, who are just outside of the drop zone.

Another side looking to push themselves away for relegation trouble is Rochdale, who sit two points above the bottom four.

Coventry are the visitors this week. The Sky Blues have lost four of their last five on the road, showing how this is a game where both sides will desperately want the three points.

Elsewhere, it’s a trip to the seaside for Walsall as they take on play-off outsiders Blackpool. Terry McPhillips’ side sitting six points adrift of the top-six.

The Saddlers do have a fairly decent away record overall though, highlighting how they will be a tough opponent to beat.

Fleetwood Town made it back-to-back wins for the first time since October 2018 as they won 1-0 at Valley Parade against Bradford City on Saturday.

Joey Barton's side brushed off a determined Bradford City on Saturday afternoon in West Yorkshire. With Paddy Madden's winner in the 9th minute - which made it 30 goals between himself andf strike partner Ched Evans in all competitions - enough to see the Cod Army come away with the points.

The Bantams had chances, especially in the second half with David Ball, Eoin Doye and George Miller, but resiliance was key in the match as Town kept another clean sheet in their push for a play-off place.

David Hopkin’s Bradford City started well as they looked to get the opener after forcing Fleetwood Town to concede an early corner in the first five minutes. However it was Town who capitalised on their first attack to make it 1-0.

James Wallace whipped in a dangerous ball from the right wing that bounced across the six-yard-box and found Paddy Madden, who was able to strike it home for his 17th  goal in all competitions.

The Bantams had the opportunity to equalise in the 14th minute, but no one was there to get on the end of Lewis O’Brien’s dangerous ball across the face of goal. An opportunity wasted for the home side.

Just three minutes later the Cod Army were on the counter with J. Wallace. the midfielder spread the ball to Ash Hunter, who ran at goal before attempting to turn his defender, but the attack came to nothing. It was an action-packed opening 20 minutes, capped off by a wayward shot at goal by O’Brien from 25 yards.

Madden looked to continue his good start to the game but this time being the provider. His cross almost found Hunter but it was intercepted by Nathaniel Knight-Percival, and collected by Richard O’Donnell. In the 22nd minute, Evans was able to find Hunter with a cross into the box but the wide-man was unable to keep his effort down.

The game was end-to-end throughout the first half and on the brink of half time both teams had a chance to score. A deep cross from Lewie Coyle found Madden at the back-post, but the striker couldn’t get enough power behind his header to beat O’Donnell. Whilst Hunter threw himself in front of Paul Caddis’ shot, at the other side of the ground, before Town cleared the danger for a corner.

The Cod Army started the second half off with a solid defensive spell, standing firm to ensure that Bradford didn’t get an early equaliser, clearing away a Bantam’s corner and dealing with a dangerous free kick.

Hunter was involved in yet another Fleetwood attack as Ross Wallace’s reverse pass found the winger, but it came to nothing as he was immediately closed down and his shot was blocked.

Jacob Butterfield was presented with Bradford City’s next chance after Fleetwood could only clear the corner as far as the edge of the box. Butterfield’s effort fizzed just over the bar, with the home team still looking for an equaliser.

The Bantams continued to put pressure on the Fleetwood Town defence as substitute Doyle managed to pick out Ball with a cross, but Ashley Eastham was there to clear from under his own crossbar.

This chance was followed by another for the home side just a minute later. As a ball into the box from the right caused a goalmouth scramble after Harry Souttar and Ball collided in the air, but Alex Cairns was able to smother the loose ball.

The best chance of the second half fell to Miller in the 80th minute as he was able to strike the ball inside the area, but the midfielder couldn’t keep his shot down and hit it high over the bar.

Town came close, nine minutes later, when Madden pulled the ball back to substitute Harrison Biggins who fired a shot low but could only forcea save from O’Donnell.

This is the second time Fleetwood Town have won back to back games in the league this season. A fifth win on the road and another clean sheet, making that Cairn’s 12th clean sheet this season.

Today is the last day to pre-order your tickets for the Fleetwood Town's trip to Bradford City on Saturday afternoon.

The Cod Army are unbeaten on the road in 2019, and head to West Yorkshire on the back of Saturday's victory over Charlton Athletic.

Last time the two sides met at Bradford City, Town came away 3-0 winners thanks to second half goals from Jordy Hiwula, Devante Cole and Ash Hunter. Will the Cod Army has a repeat of that performance this time around? Well pick up your tickets and you will see!

Under 11s - £5 (when purchased with adult tickets)

For more information about the fixture, or to purchase tickets, supporters can call 01253 775080, or visit the club shop at Highbury Stadium. You can also find more details online HERE.

*Please note that adult ticket prices rise to £25 if purchased on matchday. 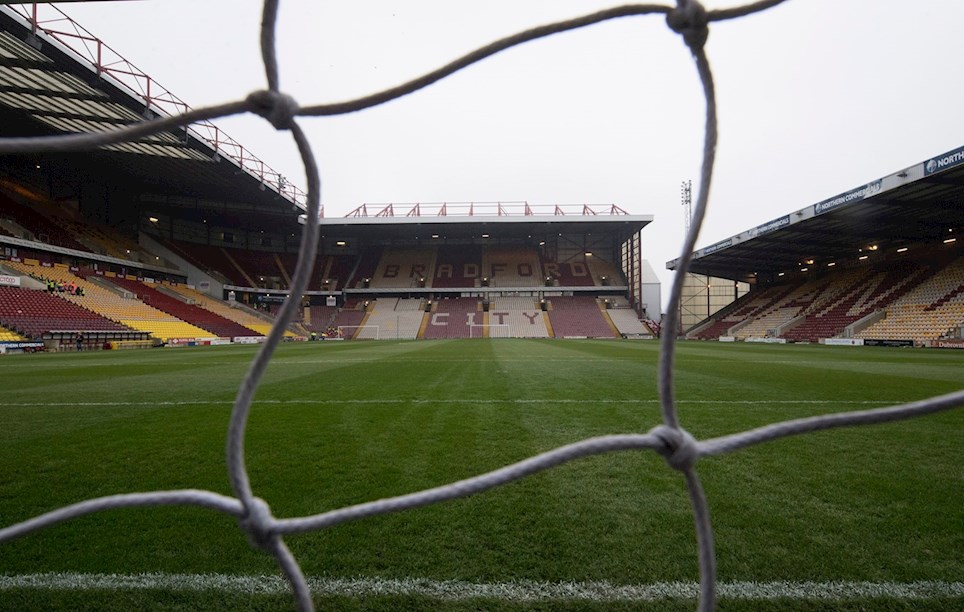 
Tickets and coach travel remain on sale for Fleetwood Town's trip to Bradford City on Saturday. 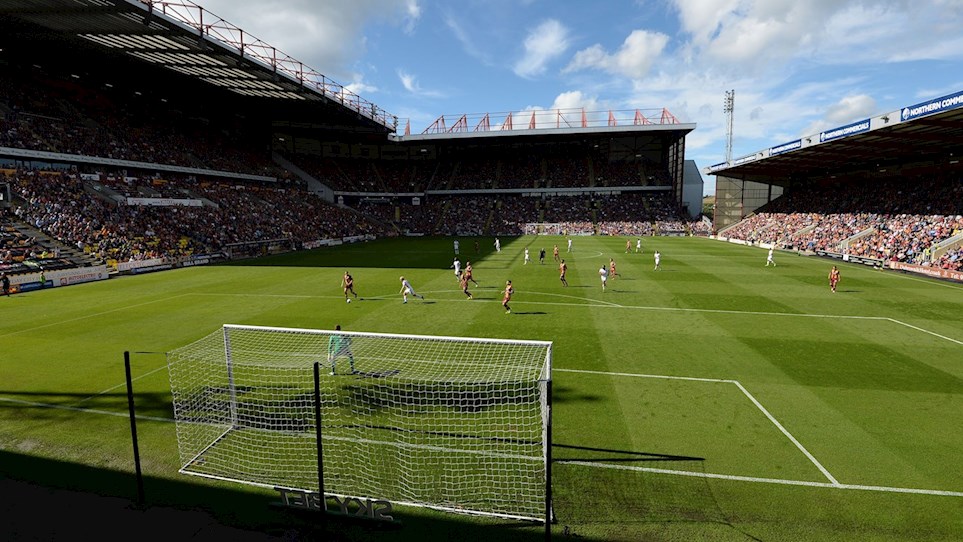 Tickets on sale for Bradford fixture


Match tickets and coach travel are now on sale for Fleetwood Town’s trip to Valley Parade to play Bradford City in a Sky Bet League One fixture on Saturday 9th February.