Fleetwood are back in league action on Saturday as they welcome local rivals Blackpool to Highbury, in what will surely be an exciting encounter.

Fleetwood will look to return to winning ways after a harsh 4-2 defeat at Walsall on Tuesday evening thanks to two late goals from Daniel Agyei and Tyler Roberts, while The Tangerines will also look to put 90th minute heartbreak behind them after Gillingham’s last gasp equaliser at Bloomfield Road. 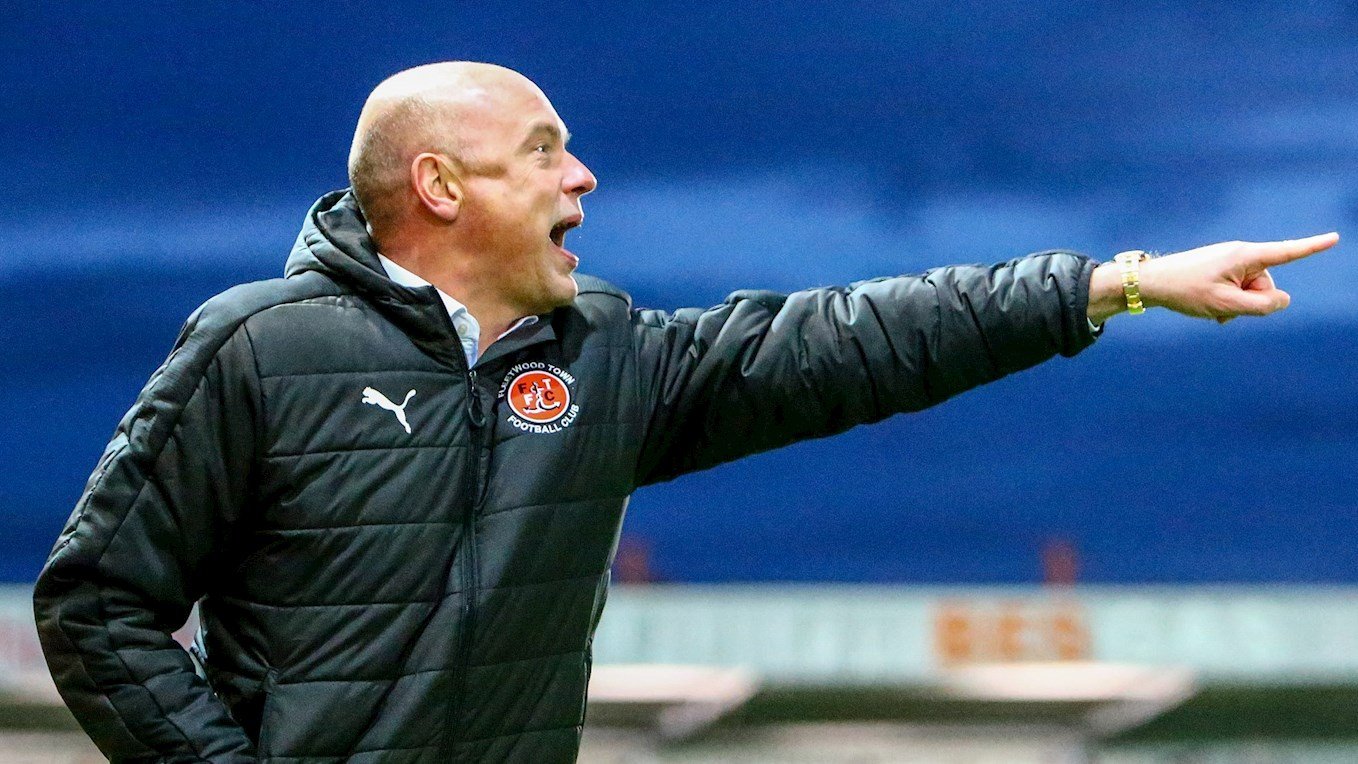 "You always get a little bit extra from your players in derby games. It means a little bit more to everyone - the fans, the players and the staff.

"We have a lot of players in our squad that have never experienced the derby before. We have spoke a lot about it on the pitch and in the classrooms. They know what to expect tomorrow."

"Blackpool is a great club with a great team and stadium. They are a club to be reckoned with to eventually make it out of League One." 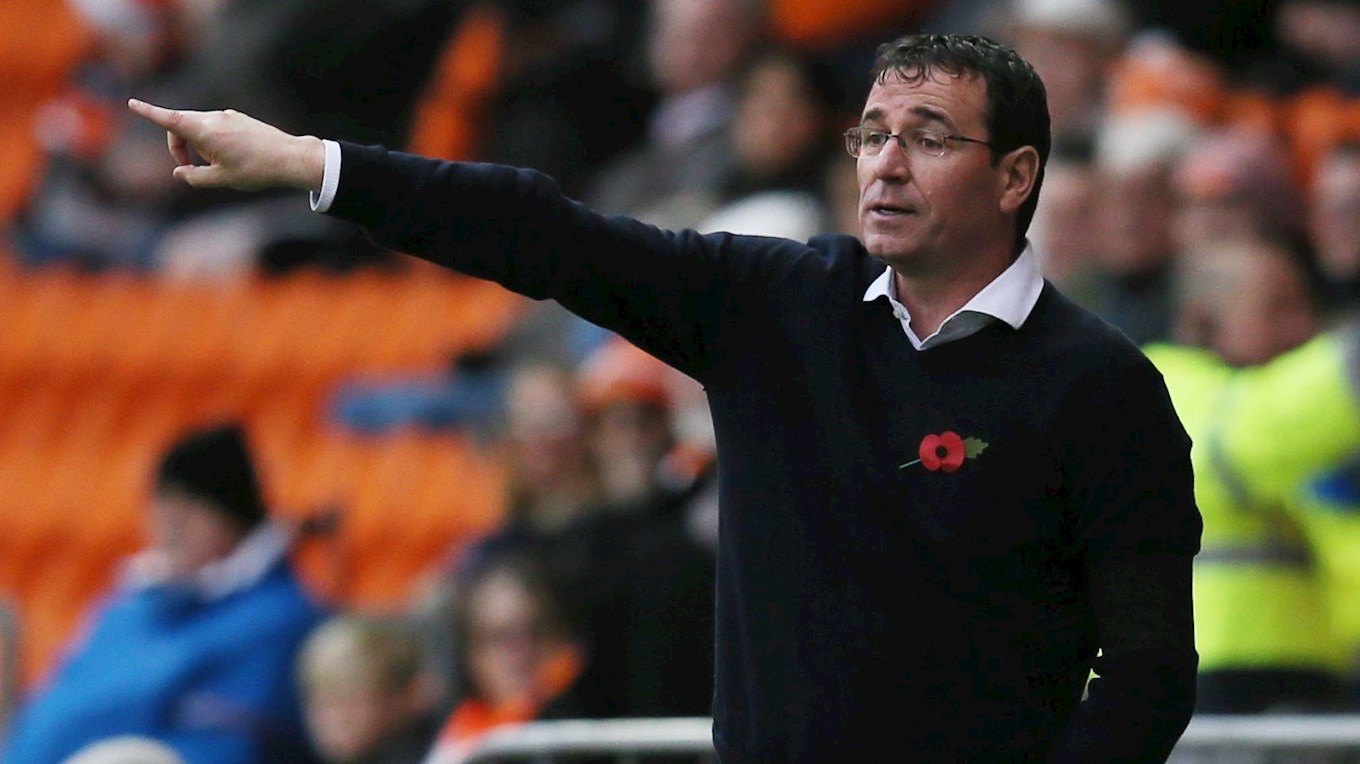 “We can’t wait. A local derby at any level is always exciting for players, fans and supporters. I’ve been educated this week on the importance of this derby and the history of it – it’s a bit of a new one.

“We’ll go there with a good backing. They were excellent last week at Peterborough and we’ll need them again to get us over the line against a good, young, organised and energetic Fleetwood side.

Fleetwood are without a win in their last four Sky Bet League One games since beating Oxford United on the 28th October.

Blackpool have won just once in five, with their 1-0 victory at Peterborough United last Saturday ending a three match losing streak.

The last Fylde Coast derby came in the 2015/16 season when the two games produced just one goal.

The game at Highbury finished 0-0 while a Nathan Pond own goal gave Blackpool at 1-0 win at Bloomfield Road in November 2015.

The only other competitive meeting came in 2012 when then Championship Blackpool ran out 5-1 winners at Highbury in the FA Cup 3rd Round. A hat trick from Matt Phillips had Blackpool on their way, with Kazenga LuaLua and Tom Ince also scored. A certain Jamie Vardy scored the Cod Army’s goal.

Saturday will be a big day for Fleetwood Town academy coach Stephen Crainey, who spent six years at Bloomfield Road between 2007-2013, as well as playing 28 games for the Cod Army between 2014-15. 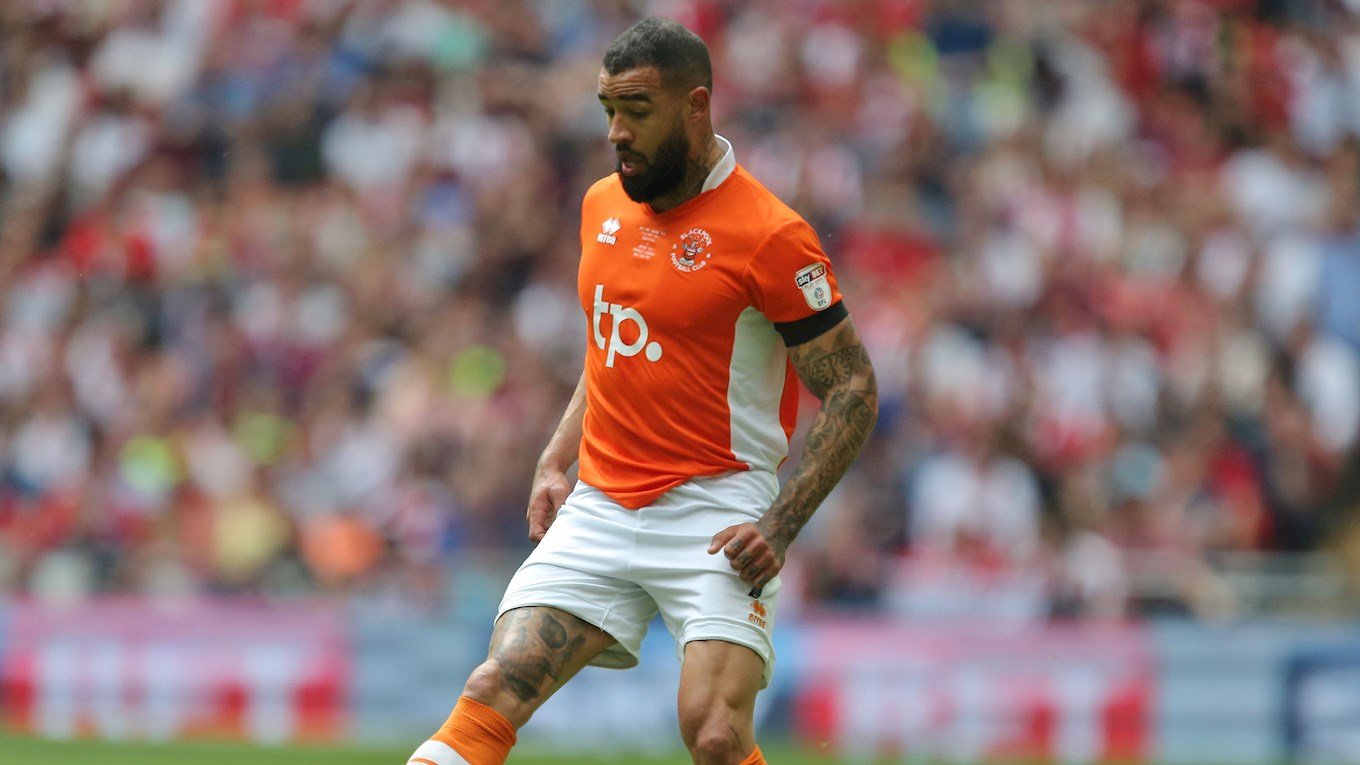 With 8 goals so far this season, striker Kyle Vassell is leading the way on the Tangerines’ scoring chart. Three of those goals have come in his last three games, including that 1-1 draw with Gillingham, and Fleetwood will have to be at their best if they are to prevent the striker from making it four in four on Saturday.

After an initial career with Norwich City and Brentford’s youth teams, Vassell embarked on a nomadic career in non league football, notably for Sutton United and Chelmsford City amongst a series of loan spells, before signing for Bishops Stortford in 2013. After a successful season with the National League South side, Peterborough United plucked him away from Hertfordshire, before signing for Gary Bowyer’s side in 2016. He is a regular on the Blackpool team sheet and is closing in on 50 appearances.

Uwe Rosler's men go into Saturday's match as favourites, with Sky Bet pricing them at 7/5 to take three points.

The two sides played out a goalless draw at Highbury when they last met in 2016, and a repeat of this score line is priced at 9/1. 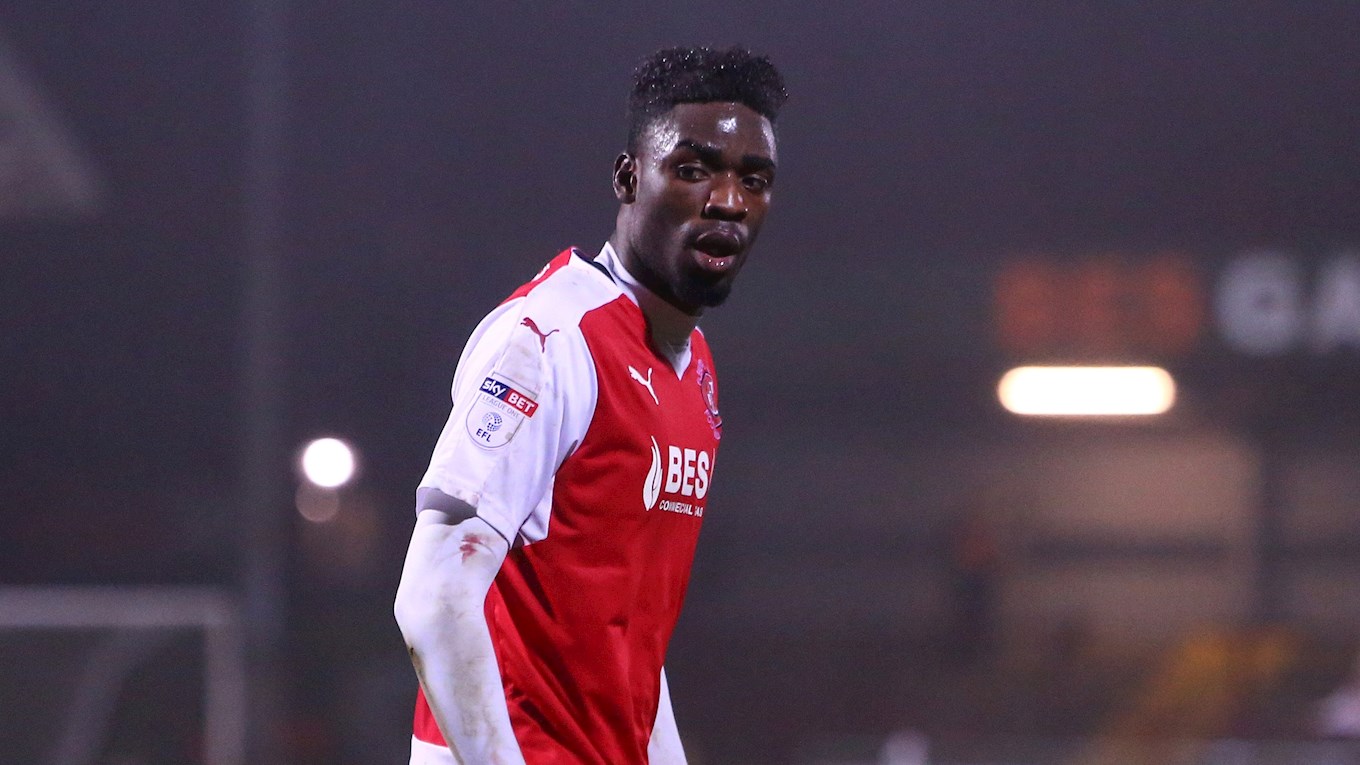 Devante Cole is the top scorer for Rosler's side in League One with eight goals, and he is a 4/1 shot to score the first goal.

Blackpool's Kyle Vassell is also on eight goals, and he is 6/4 to score any time. 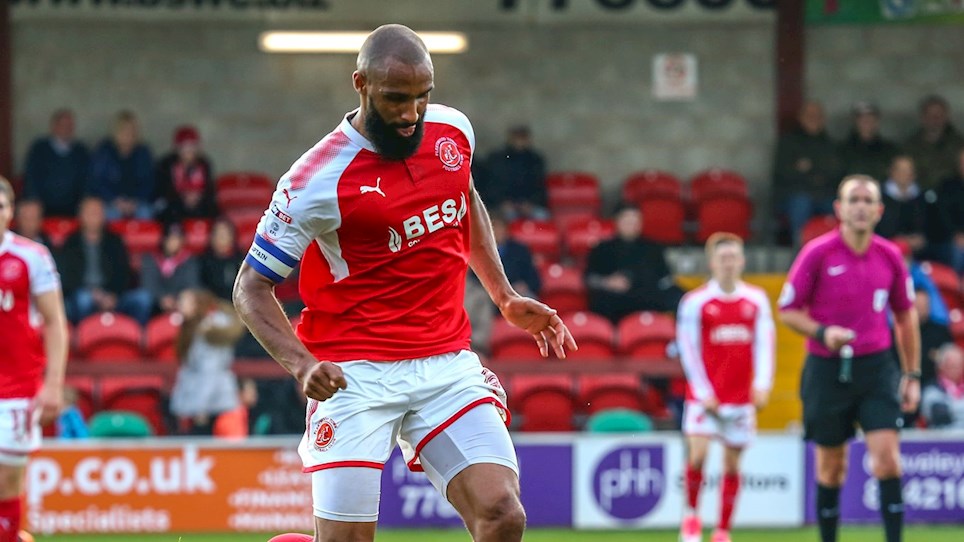 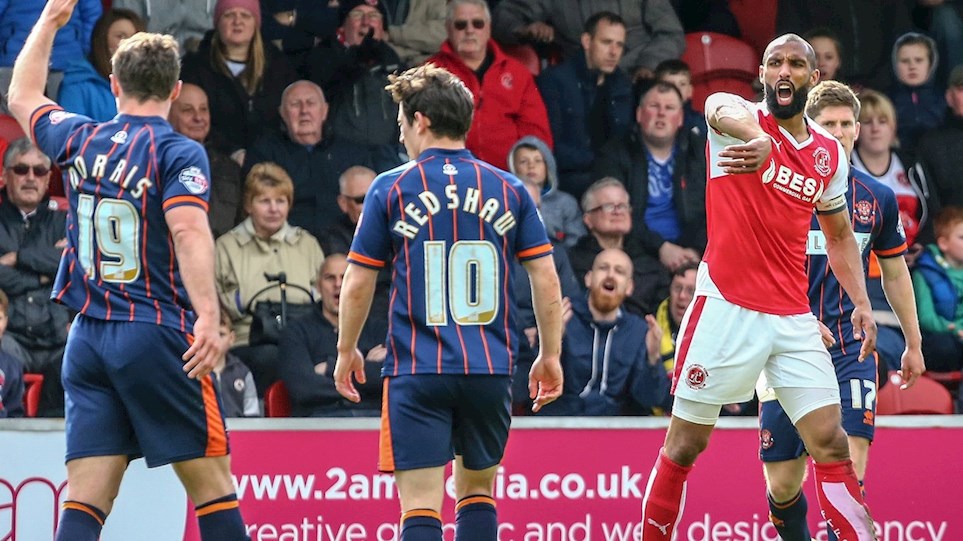 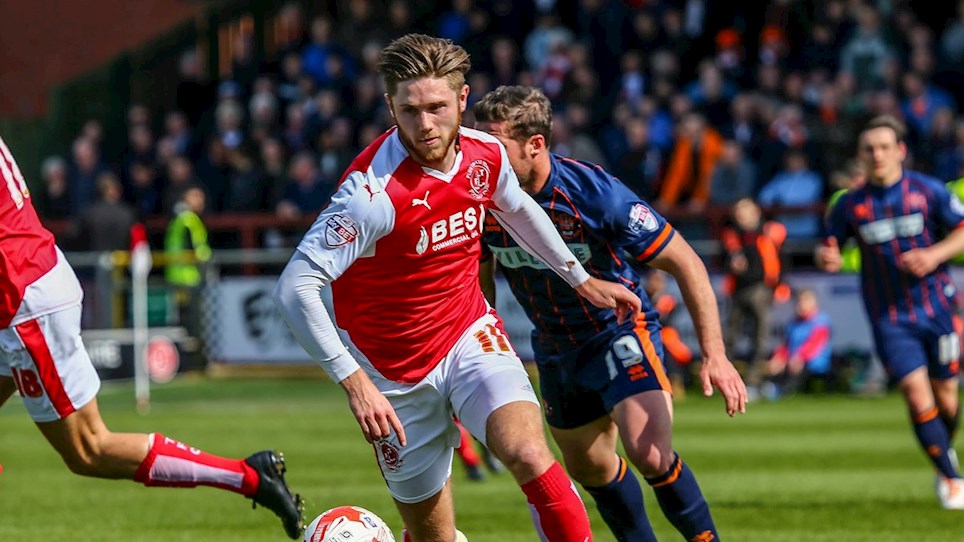 
Fancy a bet ahead of Fleetwood Town’s game against Blackpool this Saturday? See the latest odds with our EFL partner Sky Bet. 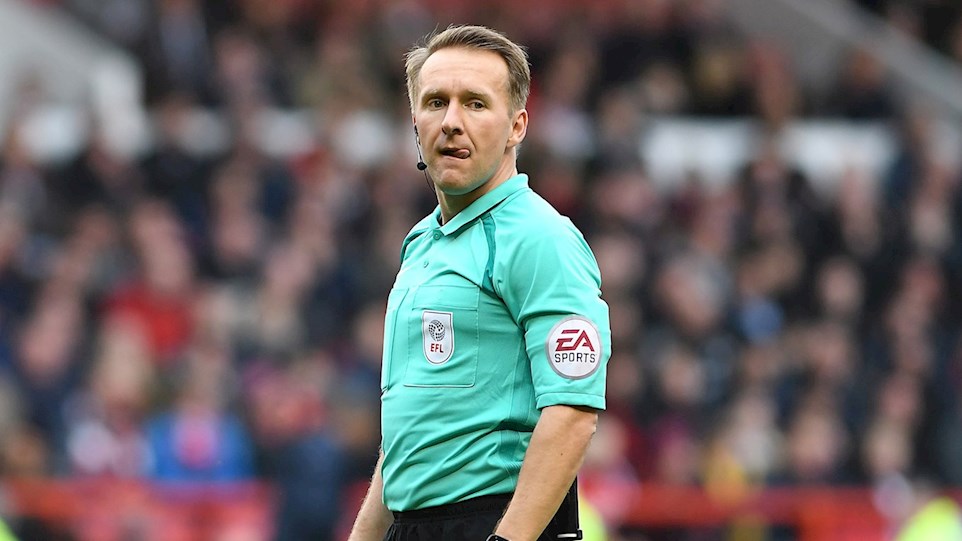 
The match officials for Saturday’s derby clash against Blackpool have been announced.

Fleetwood marked their 250th Football League game with a point as they drew 0-0 against local rivals Blackpool at Highbury on Saturday.

In front of a sellout crowd in FY7, Wes Burns had the best chances of the game for Fleetwood, as they earned their third straight home clean sheet.

The Tangerines rarely threatened in the second half but did have the better of the first period, but it was Uwe Rosler’s side that dominated the possession in the final 45 minutes.

Rosler made five changes to the side that played in Tuesday’s 4-2 defeat to Walsall, with Nathan Pond returning to the starting line up alongside Jack Sowerby, Devante Cole, Burns and George Glendon.

The atmosphere was electric at Highbury from the off and had all the hallmarks of a typical derby game, not just in the stands but on the pitch as well as a few early challenges flew in.

The possession fluctuated between the two sides in the early exchanges as both teams looked to find a foothold in the game. Blackpool had a golden chance to break as a Fleetwood corner led to a counter attack for the visitors, but good defending from Amari’i Bell put paid to any danger from Kyle Vassell.

It continued to be a scrappy affair with most of the battles coming in midfield, but the game did open up slightly when Jay Spearing’s free kick into Fleetwood’s area caused trouble, but fortunately for the hosts the referee deemed there was a foul.

Burns then broke free down the right hand side before whipping the ball in, but Ryan Allsop in the Blackpool net claimed the ball after Kyle Dempsey’s attempted header.

Burns continued to cause trouble down his side a forced a succession of corners, which eventually led to Ashley Eastham heading over Glendon’s delivery.

Up at the other end, the away side did well as Vassell held off Pond on the break before cutting across to Solomon-Otobor, who had his shot deflected wide. Alex Cairns was then forced into a diving save to deny Sean Longstaff as Blackpool began to control the possession.

They weren’t making their dominance count though, and Fleetwood were given the opportunity to pounce on a defensive error, but Sowerby couldn’t find a red shirt in the box with his cross.

Moments before the half time whistle, the Tangerines should have probably taken the lead as Solomon-Otobor drove a low ball into the area, but it didn’t get the touch it needed from a Blackpool player, and fortunately for the Cod Army, it sailed wide.

Town started the second half much better than the first and looked good going forward but were still struggling to find that right end product. Bell had ventured forward but under pressure from the defence his cross was forced out.

The game soon opened up completely with play soon end to end, as the noise value was ramped up by both sets of supporters. Rosler introduced Hunter and O’Neill to the action in an effort to turn the tide in what had so far been a tight game.

Hunter began making a difference from the off as he caused problems down the right hand side for Blackpool’s back line. But still there was no breakthrough for the hosts as the game went into the final twenty minutes of the game goalless.

A goal-saving header from Will Aimson was to deny Town an opener as he got in the way of a Dempsey free kick but Town continued to knock on the Tangerine door.

The action dulled down until Longstaff fired at Cairns in the final five minutes, which had been the first effort on goal for a while, but the game still hung in the balance for both sides.

With the clock ticking towards 90, Burns squandered a golden effort to win the match as his low shot rolled centimetres wide of the net – agonising for Burns, and Fleetwood, as the match ended goalless.


Fancy a bet ahead of Fleetwood Town’s game against Blackpool this Saturday? See the latest odds with our EFL partner Sky Bet.


The match officials for Saturday’s derby clash against Blackpool have been announced.

Fleetwood Town would like to issue the following reminder to visiting supporters ahead of Saturday’s fixture.

The club are advising that Blackpool fans without an away end ticket should NOT travel to Highbury.

Club officials are working closely with the local Police and Blackpool FC's safety team to ensure any away supporters attempting to gain access into the home stands are refused entry.

Furthermore, we will have a number of spotters in operation on the day to ensure that anyone who is identified as having entered the ground in the wrong areas will be ejected without any refund on their ticket.  A zero tolerance policy will be adopted with this regard.
Blackpool’s full allocation for the game has been sold and NO tickets will be on sale at Highbury Stadium for away supporters on the day. 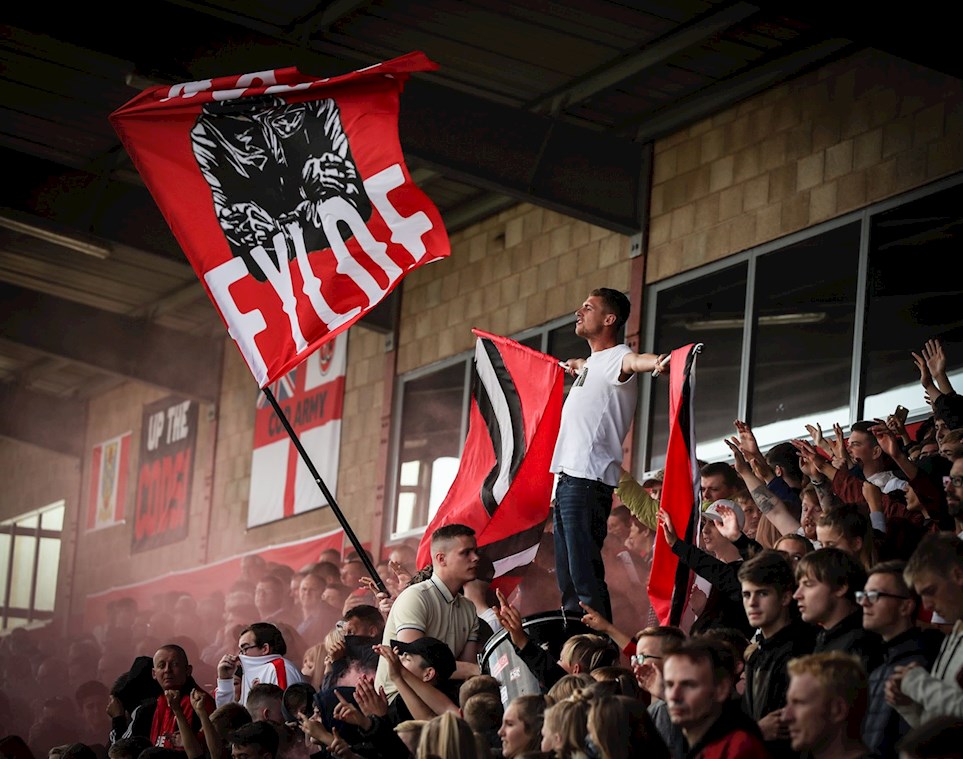 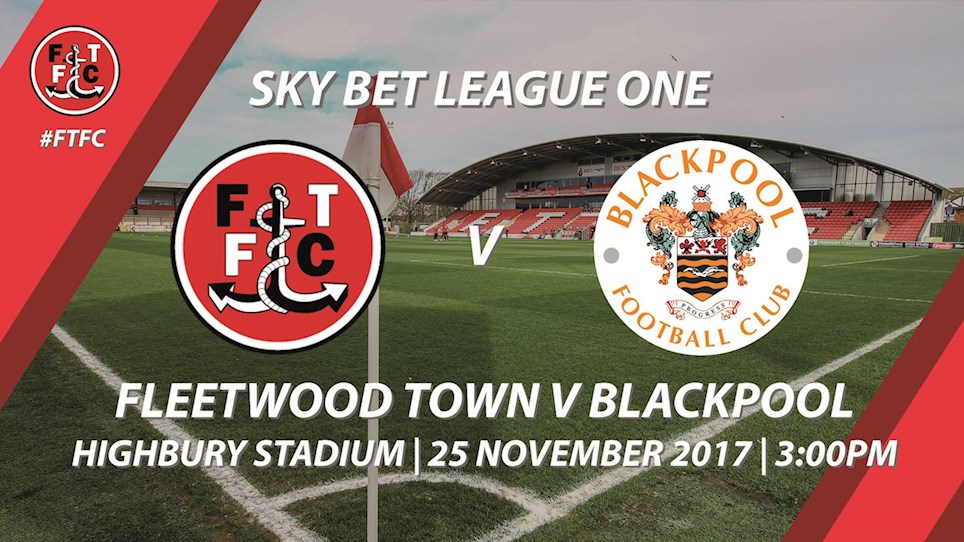 
The club can now confirm the ticket arrangements for Fleetwood Town supporters for our match with Blackpool on Saturday 25th November 2017 (3pm k/o).