Fleetwood Town put in an improved performance on Tuesday night against Portsmouth, but fell to a narrow 2-1 defeat.

Goals either side of each half from Jamal Lowe and Oliver Hawkins gave Pompey a 2-0 lead, and despite Conor McAleny’s late stunner – Town suffered a eighth straight loss in all competitions.

Town started brightly to the game, enjoying large spells of possession with the Cod Army faithful in full voice.

The hosts went close when a short corner found Kyle Dempsey on the edge of the box, but he drilled his shot narrowly wide of Luke McGee’s post.

Fleetwood were knocking on the door again when Ashley Hunter whipped in a dangerous cross from the left, Ashley Eastham rose highest, but his header was straight at McGee.

Pompey’s first chance of the half came through Adam May when he turned on the edge and forced a good save from Alex Cairns down to his right.

But the visitors took the lead against the run of play after 24 minutes, when a blocked shot fell to Lowe and he fired past Cairns to give Pompey the advantage from inside the area.

The next and last chance of the first half went to Portsmouth when Matthew Kennedy whipped a free-kick over the Town wall but Cairns got down smartly to smother the shot.

Pompey went close to doubling their lead at the beginning of the second period when a corner prompted a goalmouth scramble before Town cleared the danger.

The Cod Army responded well and almost got back on level terms when Hunter’s strike went inches wide of the target with McGee beaten.

Oliver Hawkins went close for Portsmouth midway through the second period when his well-struck volley flew just over the Town crossbar.

The visitors did however double their lead with 15 minutes left, when Lowe’s shot produced a fine save from Cairns, but Hawkins was there to turn in the rebound.

But Fleetwood pulled a goal back with nine minutes left when McAleny produced a moment of magic – working the ball out of his feet and curling a 25-yard shot into the top right corner.

Town fought hard to force an equaliser, but a stubborn Pompey defence prevailed, leaving Highbury with all three points.

Caretaker head coach Barry Nicholson has given his thoughts on the narrow 2-1 defeat at home to Portsmouth on Tuesday night.

Nicholson saw a spirited performance from his side but a late push after Conor McAleny's wonder strike wasn’t enough to cancel out Jamal Lowe’s and Oliver Hawkins' goals.

Nicholson's thoughts on the match…

“I am obviously disappointed with the result. It’s a sore one to take.

“We started off brightly and did well in the first 10-15 minutes of the match, but the goal put us on the back foot.

“That seems to happen when you are on the run we are, and you could see the boys' head drop.

“The second goal was a poor goal to concede and at 2-0 it’s a hard to come back from that, but the lads responded well and Conor’s goal was really good and that pushed us on.

“I am sure there will be plenty of positives when I look back through the game and we need to take those positive forward with us.

“I can’t fault the players effort. They gave me everything tonight."

On Town’s start to the match…

“We did and we started brightly, knocked the ball around well and looked to switch the play when we could.

“Maybe we were a bit too rushed at times to get on the ball and missed the short ones, and that’s something we should have done.

“I wished the players were a bit more aggressive in their positioning and being on the front foot and I did say that, but their goal like I said put us on the back step.

“My job is to now get the boys going again for Saturday."

“Joe did well and slotted into that left wing back role well, and it’s difficult to do that when you haven’t played for a long period of time.

“Harrison is one I toyed with about playing, but I thought we needed somebody to get on the ball in the middle of the park.

“For someone so young I thought he did well. He is a young talent and he’s one who always wants to learn on the training ground.”

On the impact of the substitutes…

“We needed to change things once that second goal went in and go more attacking.

“Wes [Burns] gave us that down the right hand side and he was direct with what he did, and it was just a matter of that ball in the final third.

“Conor has that ability and has been great in that position where he drifts off the front man.

He scored a great goal tonight to get us back into the game.

“I am pleased for him and he was frustrated not to have started the match but I have no complaints."

On looking ahead to Saturday’s big game against MK Dons…

“I will be going to Rochdale tomorrow night to watch them against MK Dons.

“It is a massive game on Saturday, but it’s important we get the players recovered before they’re back on the training ground.

“I now have to go and pick the right team for Saturday.” 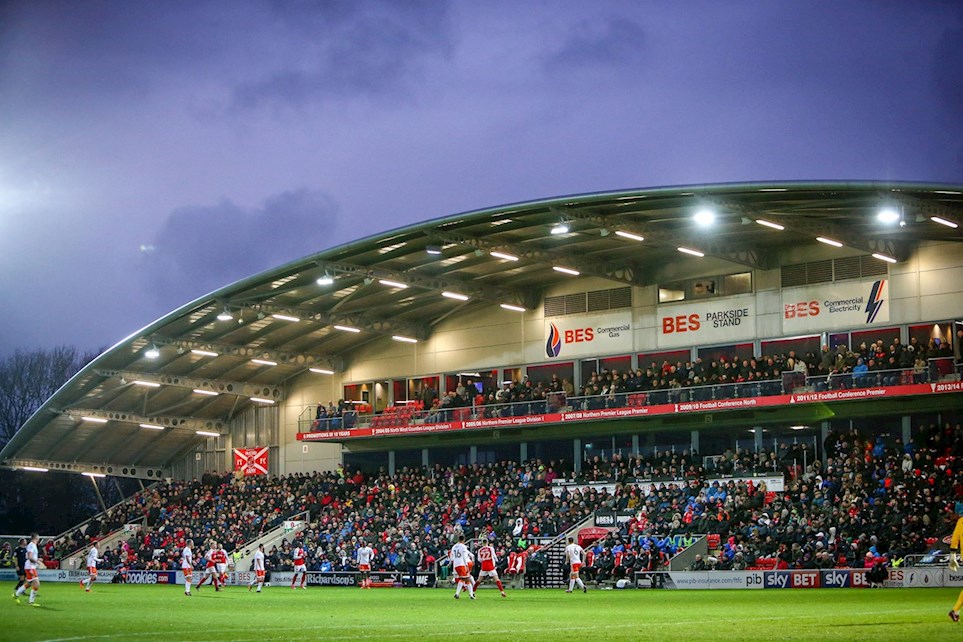 Town return to Highbury on Tuesday to face Portsmouth


Fleetwood Town return to Sky Bet League One action on Tuesday night, when they welcome Portsmouth to Highbury (7:45pm k/o).