The Cod Army are getting ready for their third Sky Bet League One fixture of the season as they take on AFC Wimbledon at Highbury on Saturday (3pm).

Fleetwood will be looking to continue their 100% record from the opening two weeks of the season, where they beat Rotherham United on the opening weekend before scoring a late goal at Sixfields Stadium to overcome Northampton Town.

It's been a mixed start to the season for Wimbledon who have drawn one and lost two after playing three games in all competitions.

Their season began with a 1-1 draw against Scunthorpe United, with new loan signing Jimmy Abdou scored his first goal for the Dons, before they were defeated by Brentford 3-1 in the first round of the Carabao Cup.

Wimbledon then started their home campaign with a loss to Shrewsbury Town as a goal from Alex Rodman in the opening ten minutes was the only goal in the game. The Dons needed 'keeper George Long to make a few saves to keep them in it but a late surge was not enough to share the points.

Town have not had a great past against the Wombles as after eight meetings, they are yet to come out with a win. The record between the two clubs currently stands at three draw and five Wimbledon wins.

In the two meetings last season, both sides ended up with two points as neither team could thwart the other. The first of the two, at Kingsmeadow, ended 2-2 whilst the meeting at Highbury finished goalless.

Midfielder Jimmy Abdou started his career in English football when he was scouted by Plymouth Argyle in 2007. Abdou made the move to Millwall one season later and has since played almost 300 games for them. This season, he has been loaned out to the Dons, where he has played a part in each of their games and also scored on the opening day against Scunthorpe.

Another one to watch is winger Andy Barcham. The man from Basildon has been with the Wombles since 2015 and has impressed throughout his time there. The Tottenham Hotspur youth player has scored 10 goals in 71 appearances so far but is yet to get off the mark this season.

One player who has stood out in all the games so far is goalkeeper George Long. Even though he has conceded goals in the opening games of the season, he has played an integral part as their shot-stopper. He may be a tough one to beat on Saturday.

Tickets are still available for all supporters. Fans are advised to buy in advance of the match, either online here, at the ticket office at Highbury Stadium, or by calling 01253 775080. Adult tickets start from just £22! 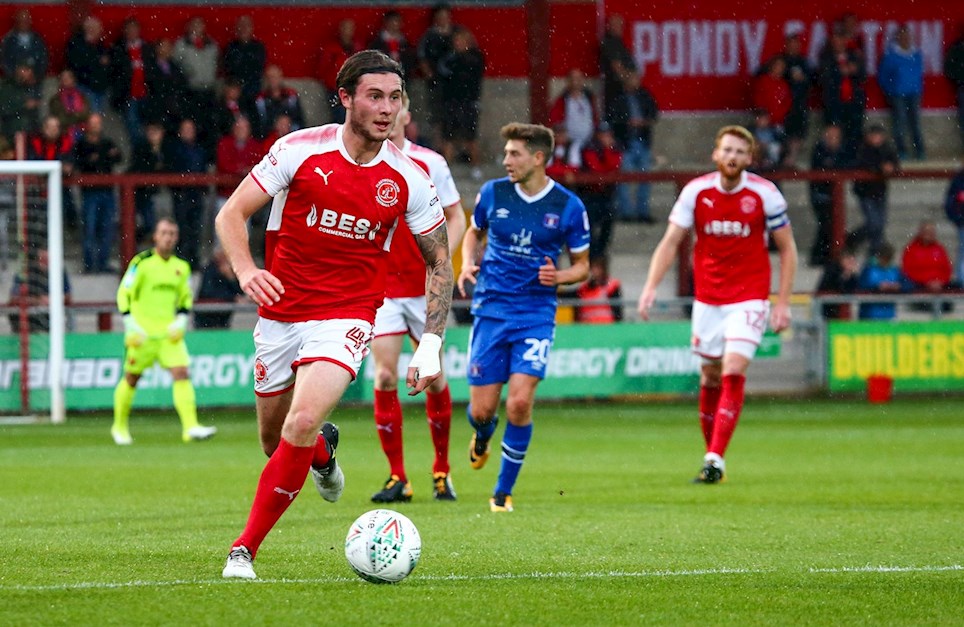 
Uwe Rosler has named his side to face AFC Wimbledon this afternoon at Highbury Stadium Stadium.


Fancy a bet ahead of Fleetwood Town’s fixture with AFC Wimbledon this Saturday? See the latest odds with our EFL partner Sky Bet. 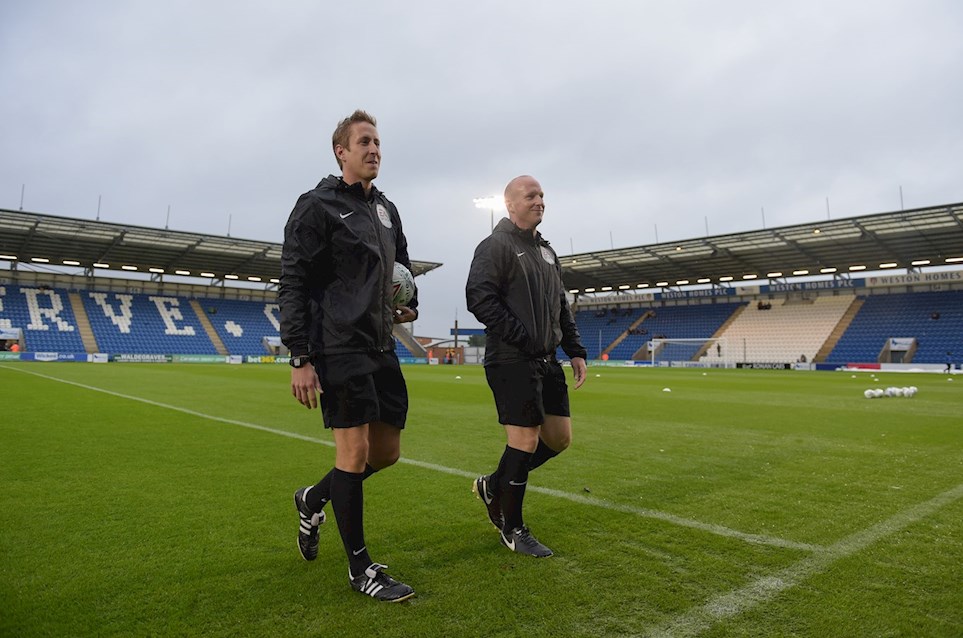 A goal in each half from Devante Cole sealed Fleetwood Town’s third win from three games in Sky Bet League One, defeating AFC Wimbledon 2-0 at Highbury.

Cole – who was recalled to the starting line-up after scoring the winner at Northampton Town last week – netted twice to secure all three points for the Cod Army.

Uwe Rosler made two changes to the side that beat Northampton last Saturday. Aiden O’Neill and Cole were in from the start, with George Glendon and Conor McAleny missing out. Kyle Dempsey was also making his 50th appearance in all competitions for the club.

The game started in blustery conditions, with both sides looking to keep the ball on the floor, with the proving more difficult than normal.

The visitors threatened early on from set pieces, with Deji Oshilaja twice finding space in the area but scuffing his effort on two occasions.

Then came the opening goal. The ball started at the back with Alex Cairns, who rolled it out to Cian Bolger, who in turn slid the ball to Dempsey in the midfield. A neat exchange between Dempsey and Hiwula saw the ball find its way to Cole, who cut inside on his right foot and bent the ball past Dons keeper George Long.

Ashley Eastham and Cian Bolger both had shots from outside the area without troubling Long, with Town evidently on top.

A quick throw-in from Coyle found Bobby Grant, who shot wide just before the break which kept the score at 1-0 at half-time.

The second half started the same way as the first, with the wind causing problems but with Rosler’s side now with it at their backs.

Cole then secured the win with a stunning goal. He cut inside the hapless Dons defender Paul Robinson and bent the ball expertly past Long. A stunning goal which was never going to be saved.

The visitors rallied in the final half an hour, and went close on a couple of occasions from the lively Lyle Taylor, but it was to be Town who ran our comfortable winners.


Uwe Rosler has named his side to face AFC Wimbledon this afternoon at Highbury Stadium Stadium.


Fancy a bet ahead of Fleetwood Town’s fixture with AFC Wimbledon this Saturday? See the latest odds with our EFL partner Sky Bet.

Tickets and travel for Fleetwood Town's Sky Bet League One fixture at Bristol Rovers are now on sale.

Uwe Rosler's side travel to the Memorial Stadium on Saturday 26th August 2017 (3pm), hoping to build on their recent good league form.

FTFC supporters will be situated in The South Stand (Seating) and The Away Terrace of The Memorial Stadium. Tickets are priced as follows:

Following the news that chairman Andy Pilley has reduced coach prices by 50% for the rest of the 2017/18 season, FTFC supporters can now travel to Bristol for just £13.

Tickets and travel can be purchased from the ticket office at Highbury Stadium, or over the phone by calling 01253 775080. 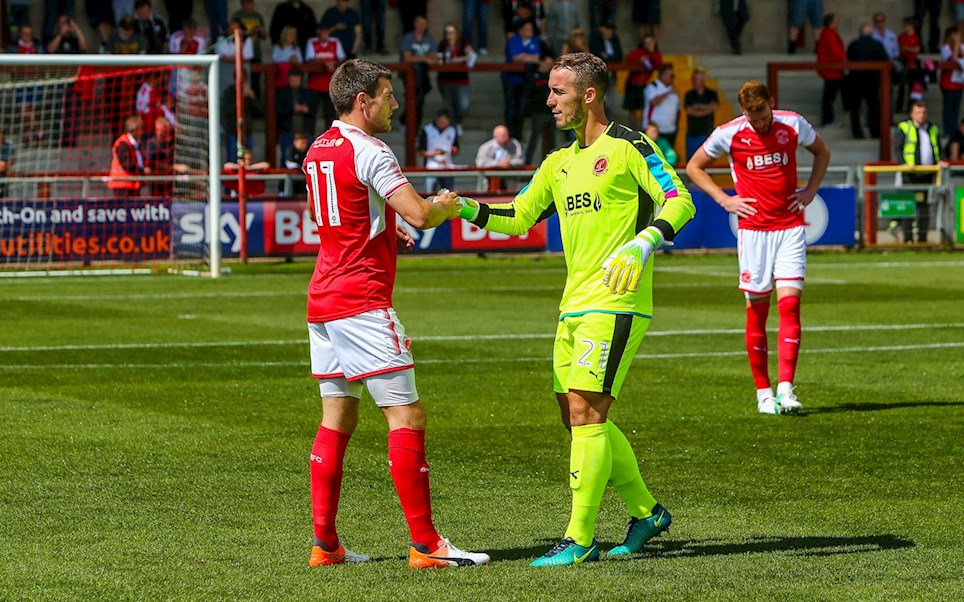 
Fleetwood Town return to Highbury Stadium this Saturday for a Sky Bet League One fixture with AFC Wimbledon.