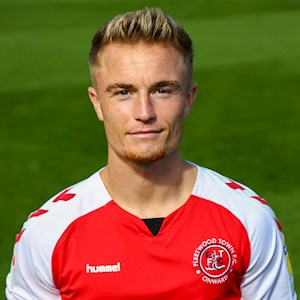 Kyle Dempsey signed permanently for Fleetwood Town in May 2017 after a successful year-long loan spell from Huddersfield Town.

Dempsey, who was born in Whitehaven, started his career in the youth setup at Carlisle United but had to wait until January 2014 for his first main team outing, which was a 3-0 win over Milton Keynes Dons.

In his first season, he managed to make himself a constant in the midfield at Carlisle, scoring 11 goals and assisting nine making him a key player for the side.

The highly-rated player then made a £300,000 move to Championship side Huddersfield after being offered a three-year deal in July 2015. His debut came a month later as he came on as a substitute in a 2-0 defeat against Hull City and his first goal was at the end of that year in a 4-2 loss against Brentford.

Kyle then signed a loan-deal with Fleetwood in August 2016 and became a fans-favourite. He had to wait but his first goal came in the 4-2 loss against Bolton Wanderers in March 2017 but a second came in April as he scored the winner in a 3-2 win against Gillingham.

Having signed for Town on a permanent deal in 2017, the midfielder went on to make 51 appearances for the club. His goal against Northampton came as Town went on a four-game winning streak to push the Cod Army into mid-table.

Kyle Dempsey after his MOTM performance against MK Dons | Interview

Burns takes on Dempsey on FIFA 20!

Kyle Dempsey on his first start of the season | Interview


Fleetwood Town players Billy Crellin, Ash Hunter and Kyle Dempsey were on hand in the ticket office at Highbury on Thursday evening, giving a hand to supporters who had yet purchased their matchday...

Meet Crellin, Dempsey and Hunter in Club Shop on Thursday


Make sure to head down to the club shop this Thursday as three first team players will be there to help you get your tickets ahead of Fleetwood Town’s derby day clash with Blackpool.


Fleetwood Town midfielder Kyle Dempsey spoke to the media on Friday morning at Poolfoot Farm ahead of Sunday’s First Round Emirates FA Cup tie against Barnet.