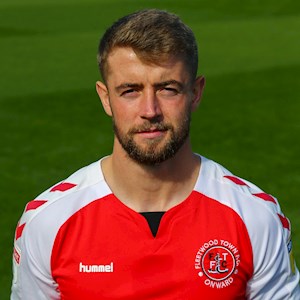 Jack Sowerby made his way into the football league after signing for Fleetwood Town from Squires Gate in 2014.

The attacker started his career playing Sunday League and was deemed as a prolific striker.

When he started attending Preston Sports Arena, Preston North End scouts saw him and signed him up at the age of eight. Football strained Sowerby whilst at school due to his commitments to the FA Youth Cup for PNE, which saw him play against sides from the Premier League and Championship but it didn’t deter him.

After a decade at Preston, he was released but luckily his tutor at college was the manager at Squires Gate so he made the move to the North-West Counties side. He enjoyed his two years at the club but favoured the second season as he scored twenty goals in twenty-one games.

Then manager Graham Alexander remembered him from his Preston days and invited him in for a trial and was quickly placed into Barry Nicholson’s Development Squad. Sowerby made his first-team debut for Fleetwood in August 2015, as he came off the bench for Antoni Sarcevic but had to wait until October 2016 for his first goal against Peterborough United.

Sowerby made 33 appearances in the 2017/18 season, scoring five goals in the process. His last minute goal against Chorley in the Emirates FA Cup first round sent the Cod Army into the second round against non league side Hereford.


Jack Sowerby says he is full of confidence after starting the last two matches for Fleetwood Town.

Sowerby returns to club after loan spell at Carlisle


Fleetwood Town can confirm that midfielder Jack Sowerby has returned to the club following a loan spell at Carlisle United.


Fleetwood Town are pleased to announce that Jack Sowerby has put pen to paper on a new long-term contract with the club.