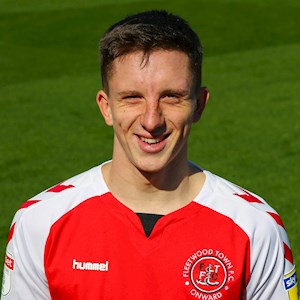 Out On Loan
Salford City

Hunter started playing football under his Dad’s management until he was picked up by Derby County at an early age.

The striker stayed at Derby County until the age of 14 and had spells at Aston Villa and Barnsley before making a more permanent move to become a scholar at Burton Albion shortly after.

Hunter almost gave up on football after being released by the Brewers but thanks to his Mum, he was invited to a trial match at Ilkeston. In his trial match, he scored four goals in 45 minutes from the centre of midfield and signed a contract soon after.

After eight games and five goals, he was scouted out by Fleetwood Town and signed in January 2015. The forward joined Town's Development Squad shortly after and after a series of impressive performances, he was given a chance in the first-team.

His debut was a 1-1 draw against Peterborough United at Highbury Stadium in February 2015 and scored his first goal in a 4-0 win against Yeovil Town that April. Since then, he has kept his spot up-front.

Hunter scored nine goals in the 2017/19 season, going on to be the joint top goalscorer alongside Jordi Hiwula - who was on loan for the year. His equaliser against MK Dons in the 1-1 draw, and his winning goals against Bristol Rovers and Walsall helped his side finish off the season strong.

Ash Hunter after scoring the winner against Bradford | Post Match


Two Fleetwood Town players were in action this weekend for their respected loan clubs, and here is how they got on.


Fleetwood Town can confirm that Ashley Hunter has joined Sky Bet League Two side Salford City on loan until the end of the season.


Fleetwood Town players Billy Crellin, Ash Hunter and Kyle Dempsey were on hand in the ticket office at Highbury on Thursday evening, giving a hand to supporters who had yet purchased their matchday...

Meet Crellin, Dempsey and Hunter in Club Shop on Thursday


Make sure to head down to the club shop this Thursday as three first team players will be there to help you get your tickets ahead of Fleetwood Town’s derby day clash with Blackpool.