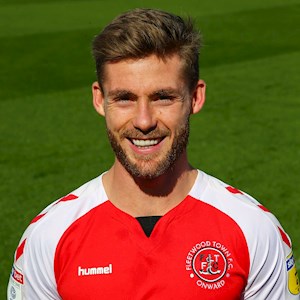 Former Everton youth prospect McAleny joined the Cod Army on 23rd June on a three-year contract from the Merseyside club.

After successful spells in the youth and reserve sides for Everton, he was called up to the first team squad for a Europa League tie at Goodison Park against BATE Borisov.

His debut came in 2011 in a Premier League match against Aston Villa and made sporadic appearances throughout the 2011/12 season.

Loan spells at Scunthorpe United and Brentford, under current Cod Army Head Coach Uwe Rosler, followed, before he signed for Cardiff City, where he scored his first professional goal in a 3-1 win against Rotherham United, and a month later his second, in a 1-1 draw at Reading.

He also spent time on loan at Charlton Athletic and Wigan, however his most recent spell came at Oxford United, where he scored ten times, including two hat tricks, against Chesterfield and Bury respectively.

McAleny scored two goals on his Town debut against Rotherham United, going on to score more goals against Portsmouth, Blackburn and Oxford United. His goal at the Kassam Stadium was voted by the fans as their 'Goal of the Season' at the Awards Evening.

Goal of the Season nominations | GOTS


Fleetwood Town can announce that Conor McAleny has joined League One side Shrewsbury Town on loan until the end of the season.

Conor McAleny heads to Kilmarnock on loan until end of season


Fleetwood Town can confirm that attacker Conor McAleny has joined Scottish Premiership side Kilmarnock on loan until the end of the season.


Conor McAleny is looking forward to having a few weeks away before preparing for next season and playing under new head coach Joey Barton.

McAleny: That was one of my best goals


Conor McAleny spoke to the press after Tuesday’s massive 1-0 win at Oxford United where he scored the only goal in fine fashion.