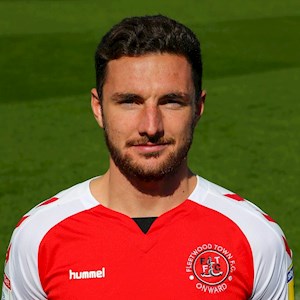 Leeds United youngster Lewie Coyle joined the Cod Army on loan from the Elland Road outfit in July 2017, and after a successful season, he has once again joined the club on a six-month loan deal.

The 21-year-old began his career with his boyhood club Leeds aged ten, in 2004, and continued through the ranks with United, reaching the first team in the 2015-16 season.

The Hull born right back was sent on loan to Harrogate Town in 2014 to gain first team experience, but this was cut short due to injury, and he returned to West Yorkshire.

Coyle’s professional debut came in December 2015 as a substitute against Nottingham Forest at the City Ground, and three weeks later made his first start in an FA Cup match against Rotherham United.

In Town’s first pre-season game of 2017, Coyle scored the winner on his debut, as the Cod Army beat Scottish side Queen of the South 1-0 at Poolfoot Farm.

After heading back to his parent club Leeds United in the summer, the young defender signed a six-month loan deal at Fleetwood, keeping him at Highbury until January 2019.


Fleetwood Town defender Lewie Coyle spoke after the goalless draw with Blackpool on Saturday afternoon in the Fylde Coast derby.


Cod Army defender Lewie Coyle has been nominated for the Sky Bet League One January Goal of the Month.