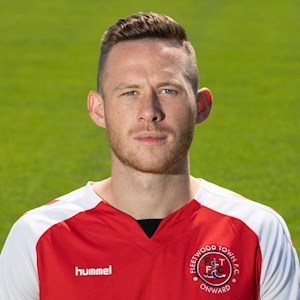 Born in Perth, Australia, Jones is eligible to play for the Socceroos or Wales and has played for the dragons at U17, U19 and U21 level.

The defender had been at Everton since 2008, signing his senior contract in 2014. In December 2014, Jones was substituted on late into Everton’s Europa League 1-0 home defeat to F.C. Krasnador.

Jones went on loan to Plymouth Argyle in March 2015, until the end of the season and he made seven appearances for the Pilgrims, keeping one clean sheet.

In the 2017/18 season he spent four successful months (from January to May) on loan at Championship side Barnsley, where he made 17 appearances and helped keep five clean sheets.

Jones joined Fleetwood Town in January 2018, and made his debut as a substitute in Town’s 2-1 away win at Southend United.


Fleetwood Town can announce that defender Gethin Jones has joined Sky Bet League Two side Mansfield Town on loan until the end of the season.

Jones: Lots of positives to take from Leicester loss


January signing Gethin Jones says the club can take a lot of positives away from Tuesday’s 2-0 loss to Premier League side Leicester City.