I recall dramatic events from a decade ago with Fleetwood Town striker, Gareth Seddon, who was coming to the end of his first season at the club.

The 2009-10 season had been tense and contentious, with old rivals Fleetwood Town and Southport going head to head. Their matches over the Christmas period typified the intensity surrounding the two sides. After losing 5-0 away at Haig Avenue on Boxing Day, Fleetwood retaliated with a 4-0 home victory on New Year’s Day. The battle for the single automatic promotion place took a dramatic new twist when the league announced in March that Farsley Celtic had been removed from the competition. Several rescue packages had been rejected and all the club’s results up to that point were expunged. The move handed Southport a crucial three-point advantage and Town had to settle for the play-offs,

Gareth Seddon: We should have gone up automatically but lost six points with the Farsley situation while Southport had surprisingly lost at home to them. I remember scoring in my Fleetwood debut in the game at Farsley and that brilliant goal by Milly from the halfway line at ours. Both removed from the records! It had been a good battle through the season with Southport but it didn’t sound right the way it was eventually handled. It was a strange way of doing things.

Town’s semi-final opponents were Droylsden who were on a roll with a 6-1 victory over Redditch United moving them back into the play-off positions. The Bloods posed a genuine threat to a side who had missed promotion by the narrowest of margins and finished eleven points clear of third place Alfreton Town. 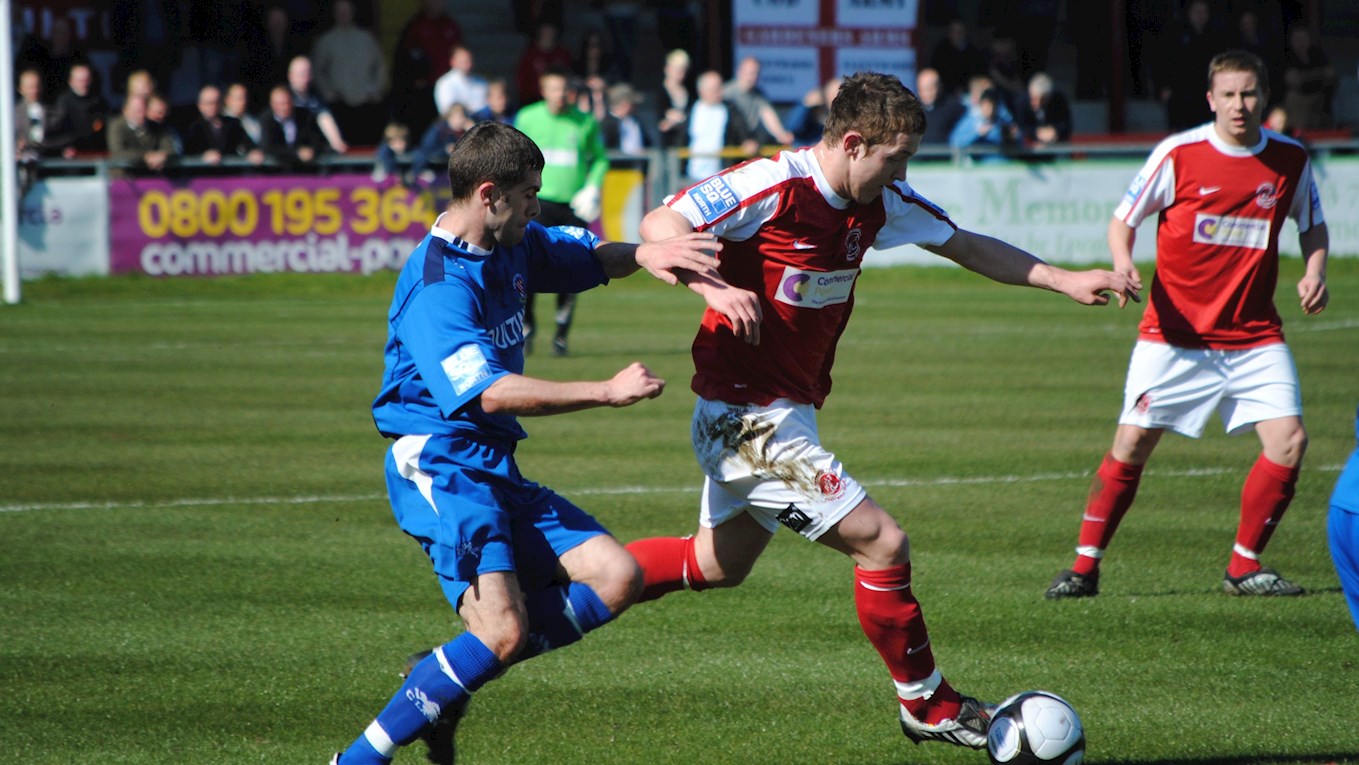 The Cod Army numbered around six hundred in the Butchers Arms Ground for the away leg on Wednesday, 28th April. Two high-scoring sides were in deadlock for seventy-one minutes until Alex Meechan opened the scoring for Droylsden with a crisp shot. Eight minutes later, a clumsy challenge on Stuart Whalley by Shaun Beeley led to a Droylsden penalty converted by Tony Gray. The mood was despondent on the journey back up the M61. After all their hard work through the season, Town had underperformed.

Seddon: The disappointment of missing out on promotion definitely carried on into that first leg. We played poorly and thought we’d blown it. We had gone from looking at automatic promotion to having points taken away and the lottery of the play-offs. It was a good job it was two-legged or else we would have been out. The defeat gave us the kick up the backside we needed and the determination to come through. Micky Mellon knew how to get us up and we got the old Braveheart war speech before the home game! We were up for it in the second leg! 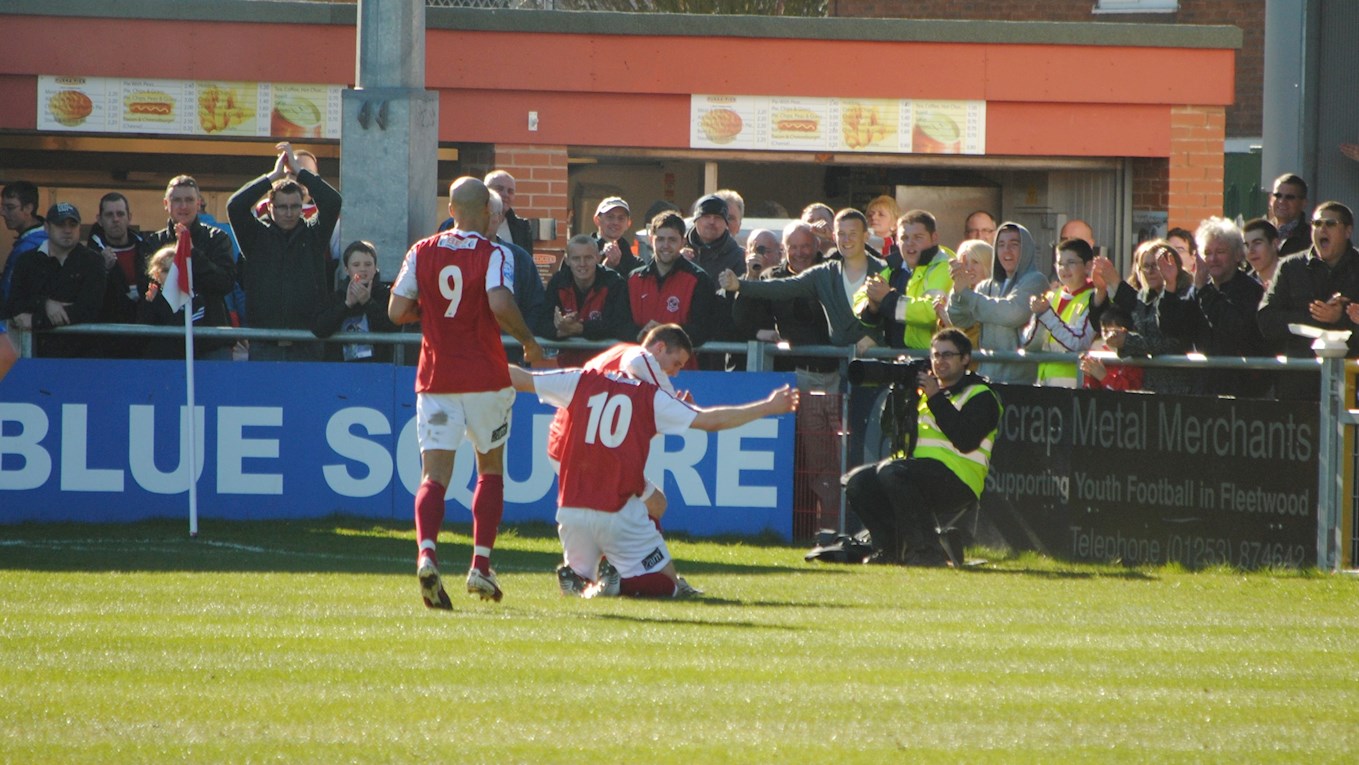 The only side to win at Highbury during the league season had been Northwich Victoria. In front of 2,862 spectators Seddon and Jamie Milligan wiped out the first leg deficit by half time. Seddon’s near post header on 35 minutes was followed just six minutes later by Milligan’s strike direct from a free kick following a foul on the striker,

Seddon: Two second leg goals and our confidence was up.

Droylsden dug deep and the match went to added time. It wasn’t until the 110th minute of this second leg that Fleetwood finally got their noses in front. Defender Simon Grand picked a perfect time to score his first goal for the club, with a header. The Bloods came back and with only seven minutes remaining Lee Roche took the tie to penalties, converting a free kick at the back post.

The kicks would be taken at a Memorial Stand End packed with partisan Town fans. Surely the Cod Army faithful could get Fleetwood over the line? Gareth Seddon was not on the list of penalty takers,

Seddon: I’d come off after we went three-nil up. They brought on a defensive player and we ended up conceding. I’d have likely been taking a penalty as well. Good job I weren’t on. I’d have probably missed!

Town’s normal penalty-taker was not on the pitch either. Jamie Milligan had gone off at full-time having battled through illness to play. Mellon’s advice was simple, ‘Put your foot through the ball.’ Alan Wright, Adam Warlow and Sean Clancy followed their manager’s message to the letter. It was befitting of a nip and tuck tie that Paul Smith’s miss for the visitors was cancelled out by Anthony Barry’s for Fleetwood. The sides were level with one kick left. Town’s Nick Rogan strode up and emphatically struck the ball into the roof of the net. The fans behind the goal edged forward in anticipation as Liam Brownhill placed the ball. He chose to go right. Danny Hurst judged correctly, dived low to his left and parried the ball to safety. 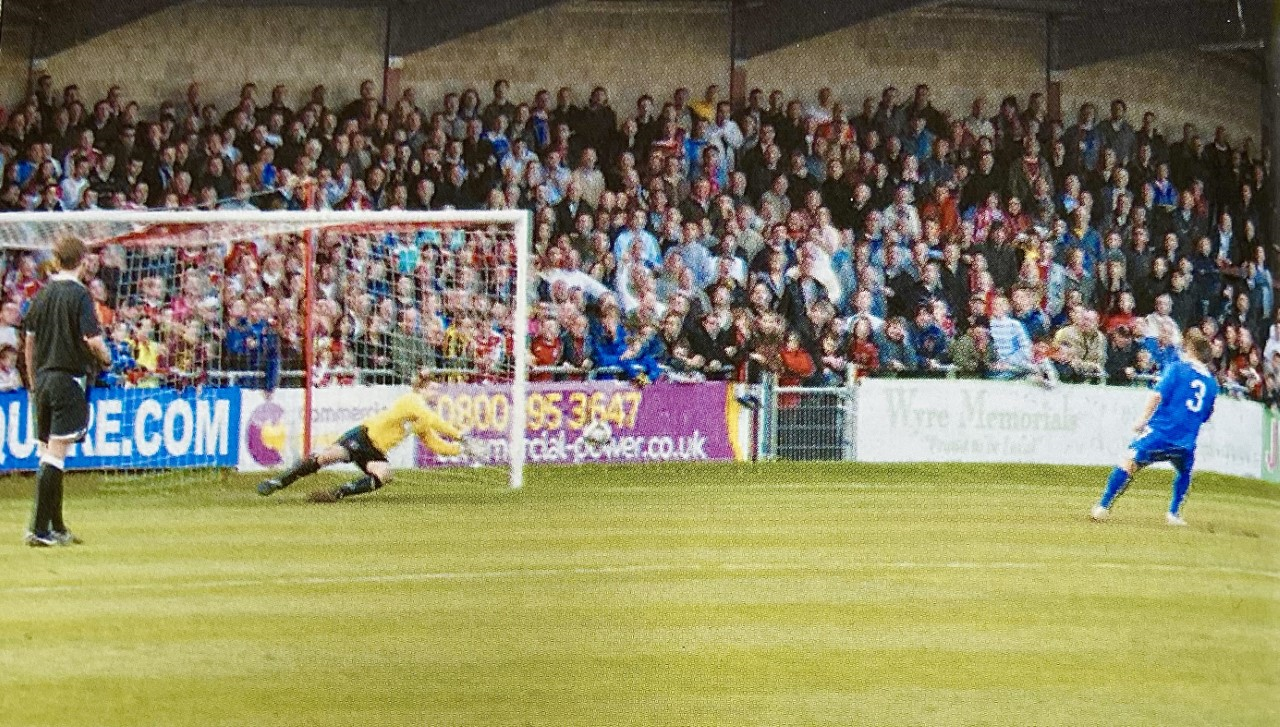 Pandemonium and a pitch invasion ensued. Chairman Andy Pilley described it as ‘the biggest win in the club’s history. It was huge, not just for the club but also for the Town’s economy.’

Bigger results would undoubtedly follow in the years to come but very few occasions could match the relief and joy that flowed through the club after Town had reached the Conference North Final in the most dramatic of fashions on that marvellous Mayday. Six days later, the job was completed with a 2-1 victory on the same ground against Alfreton Town... and it was Gareth Seddon who set his side on their way to the top table of non-league football, with a tenth-minute goal,

Seddon: It was right that we went up. 100% right. The season cemented why I had dropped down a league. Getting promoted with an ambitious club was exactly what I’d wanted to do. The players were going full time and it would have been a massive disappointment to have not made it. 2009-10 was definitely one of the biggest seasons in the club’s journey. To get out of that league when we did was massive.