Fleetwood Town walking footballer Neil Willetts was over the moon when he heard about his call up to play for England Over 70s in early November.

The 74-year-old – who has played for the Fleetwood Town Flyers for three years – played in England's first-ever international friendly in the Over 70s group against Guernsey, which finished 2-1 after a John Molloy brace.

Neil couldn’t believe that he was called up to represent England and is really pleased that it has happened.

“It was a brilliant experience. I never expected it at 74 to do anything like this in my life but it’s happened now and I’m really glad it has,” said Neil.

“You look round whilst there and think, I’m 74 and this is a brilliant achievement!

“I’m playing for North West England and have now been selected from at least 200 people to progress to play for England itself - it’s great that! Me and my family are over the moon!” 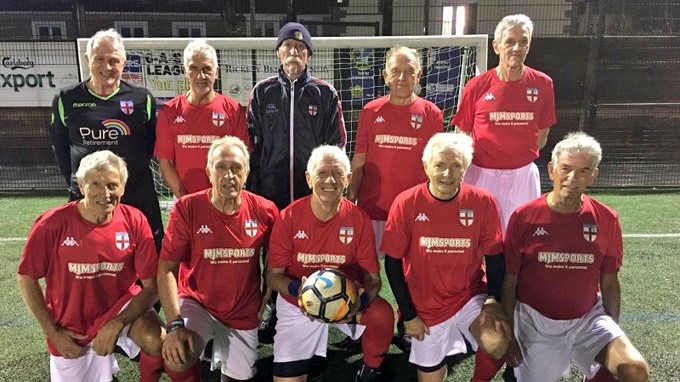 The Flyer explained that he had to go through trials at Wigan before moving on the regionals, which took place at Gloucester University, before getting the call-up.

Neil said: “To get in the England squad, you have to start off with regionals and I went and did my trails at Wigan.

“I had two lots of trials there, played for North West England down in Gloucester and it was there where assessors were watching, and players were selected from that match.

“Then, there were trials down in London where 150 players took part and I learned three weeks ago that I was one of ten players to be selected from all the squads.”

The 74-year-old – who was named man of the match in their game against Guernsey – has come away with some mementos to remember his time with the national team.

“When the manager phoned me up, he said you can make a career out of this and I said what at 74?

“I might get a year or so out of this but I’m more than happy to do that for England.

“Playing for England, I received a medal for the inaugural game, and I was also fortunate enough to be named man of the match and received a pennant because of that.

“I’ve also got a new wine glass with everything on to remember the occasion.”

*Neil is on the back row, second in from the right on the England team picture