Head Groundsman Nick Hyndman aims to get Highbury ‘pitch perfect’ ahead of the 2018/19 season as renovation work begins at the stadium and at Poolfoot Farm.

Nick explained that the club are using a process called Koroing, which strips the old surface off, gets rid of all unwanted species of grass that have grown, which helps the pitch look pristine throughout the season.

We caught up with Nick pitchside at the stadium to talk us through the whole process.

With the pitch coming up, what do you and your team do?

“We are taking off the top 20mm of the surface, just to remove any unwanted species. We tend to get a build-up of organic matter which can affect drainage and the overall surface, so this process is in place to clean that out, and get a good surface ready for next season.

“We did a similar process last year but with the effects of the Alfie Boe concert, and having over 9,000 people on the pitch, we felt we needed to de-compact it a bit more and get a bit deeper. Last year, we spiked the pitch to relieve the compaction but this year, we are cultivating the top 50mm and turning that over just to ease the effect of the concert.

“After that we will take the top off, add a new root zone and around 125 tonnes of sand. We will mix all of that in to create a nice seed bed and move on from there.” 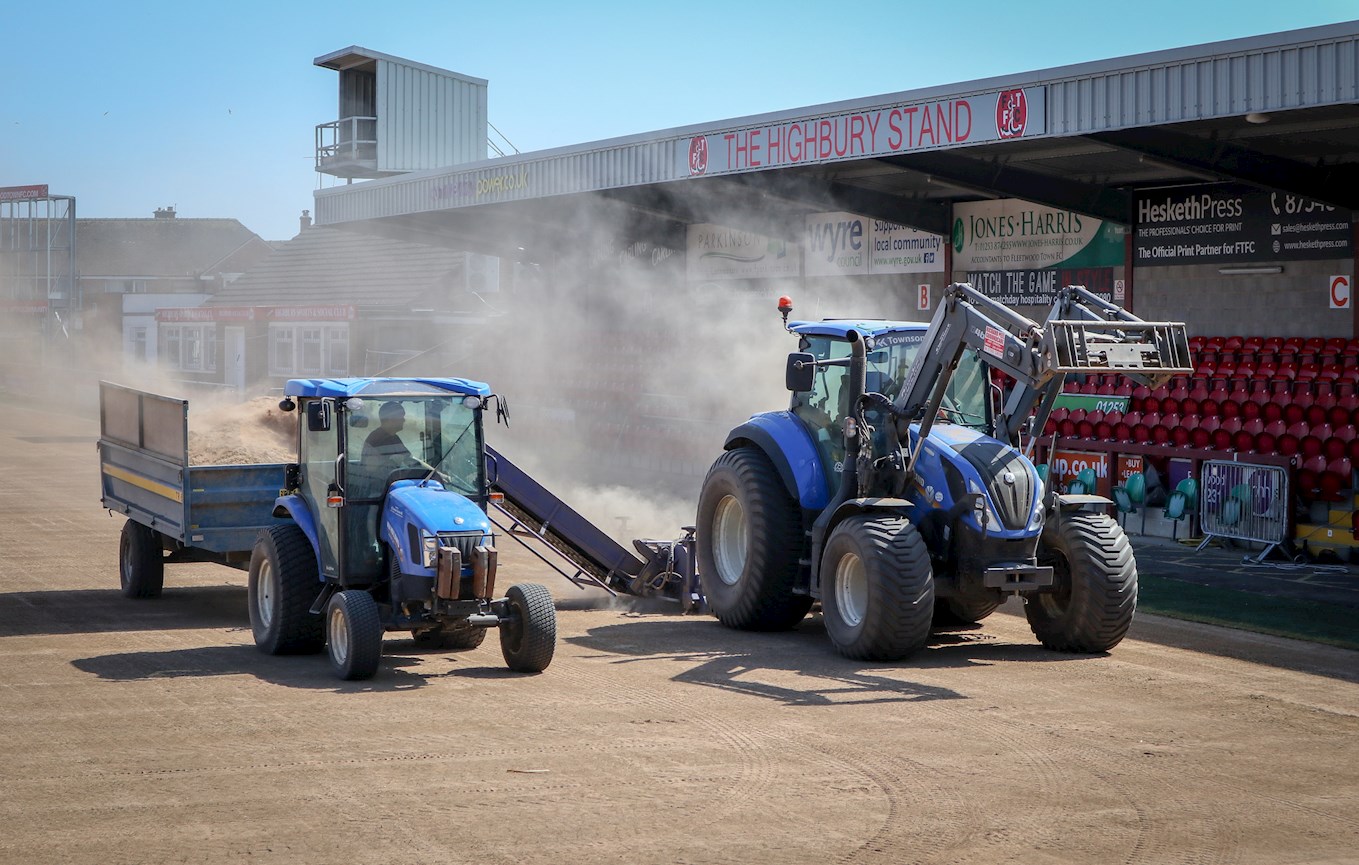 The Alfie Boe Homecoming Concert took place last weekend, how has that effected your preparations?

“With having commercial and community games on the pitch, and the Alfie Boe concert being so late in the year, it has been hard for us. At the concert, we had a massive stage on the pitch, with cherry pickers and boarding, we now have to make sure we alleviate any of these negative factors, so we don’t have issues during the season.

“Ideally, we would like 8 to 12 weeks but that’s not possible because we only have seven weeks from the seed date to the start of the season. It’s not ideal but it’s achievable and with hard work from my team, we can achieve the best surface we can ahead of the first game.” 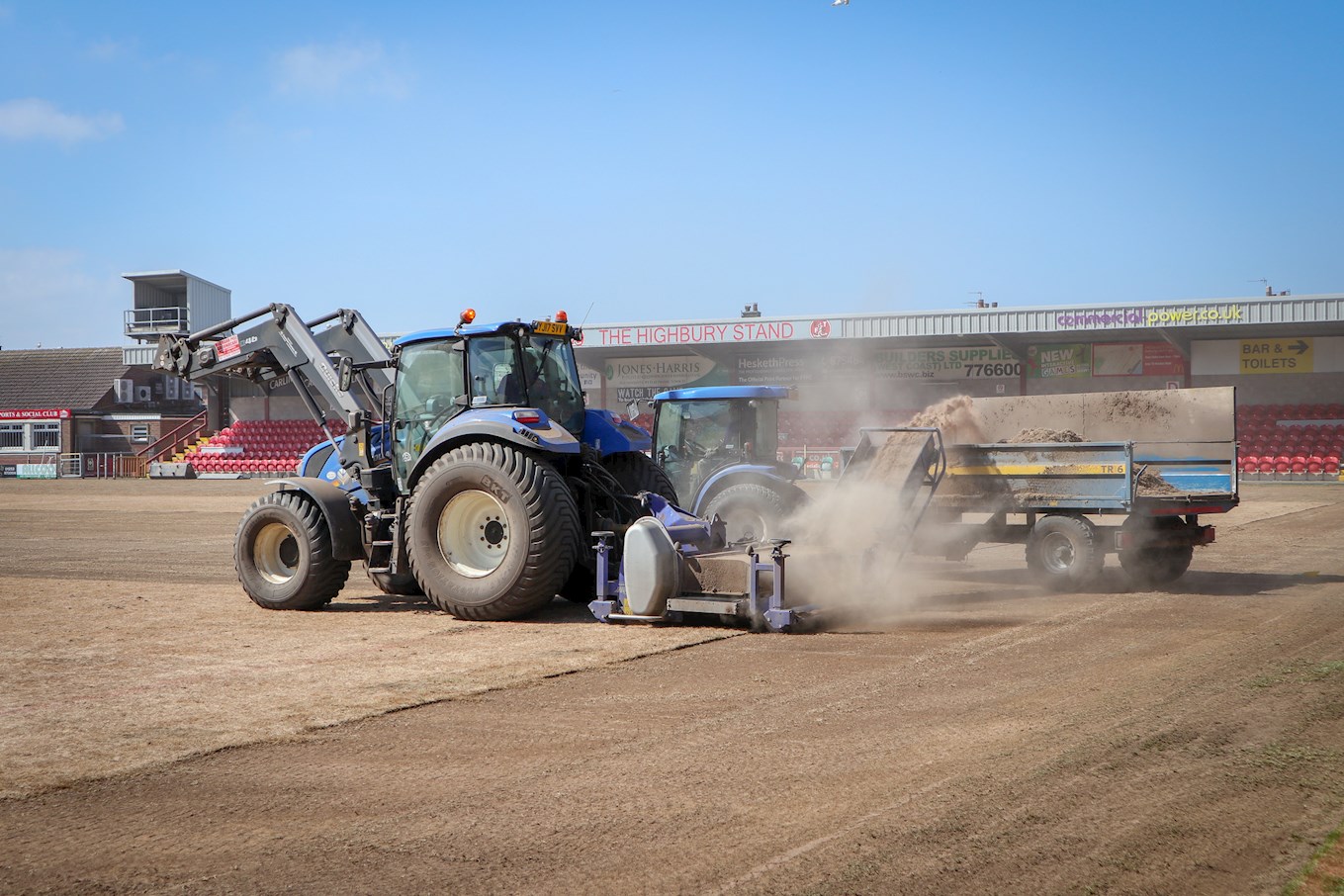 How much of an impact does the manager have on the pitches at Highbury and at Poolfoot Farm?

“We’ve met with the new Head Coach and he seems to understand what we can achieve for him here so hopefully we can provide the best surface can for him and the players.

“They’ll want a great pitch, one that is Premier League standard, and that is ultimately what we are aiming to do.

“We do a lot of work and it’s not just at the stadium, we have 12 pitches at the training ground that we also look after. Three of those pitches go through a similar process to the one at Highbury, so we have a lot on our plate in terms of getting the pitches ready for when the lads come back in a couple of weeks.”

To buy the Onward Card through the annual payment scheme, you can either visit www.onwardcard.co.uk, or come in to the club shop at Highbury Stadium.

If you want to pay in cash, this will only be available in person at the club shop at Highbury.

The option to spread the cost over ten months via Zebra Finance is available by calling 01253 775080, in store, or online at www.zebraseasonticketfinance.com/clubs/fleetwood-town-fc.

For more details about the Onward Card, go to www.fleetwoodtownfc.com.