Fleetwood Town are set to face Manchester United Under-21s at Highbury on Tuesday 18 October and we have all the information you need ahead of the 7:45pm kick-off in our match preview.

In what will be the last game of this season’s group stage, Town will be looking to round it off with a win after drawing the previous two fixtures against Barrow and Carlisle United respectively.

The Barrow fixture opened up our campaign this year and it was Brendan Wiredu who scored his first Fleetwood goal to open the scoring in that one, however, John Rooney also found the back of the net meaning that would end one apiece. Soon after, a trip to Carlisle was in store and Joe Garner showed his striker's instinct by scoring from close range but, once again, that was cancelled out before the final whistle.

In the league, Town managed to pick up four points from two away games recently against Burton Albion and Portsmouth but fell to a narrow 1-0 defeat to Shrewsbury Town in their latest outing. The Shrews clash was a hard-fought one, but Tom Bayliss’ strike on the half-hour mark in that one decided who would walk away from Highbury with the points. 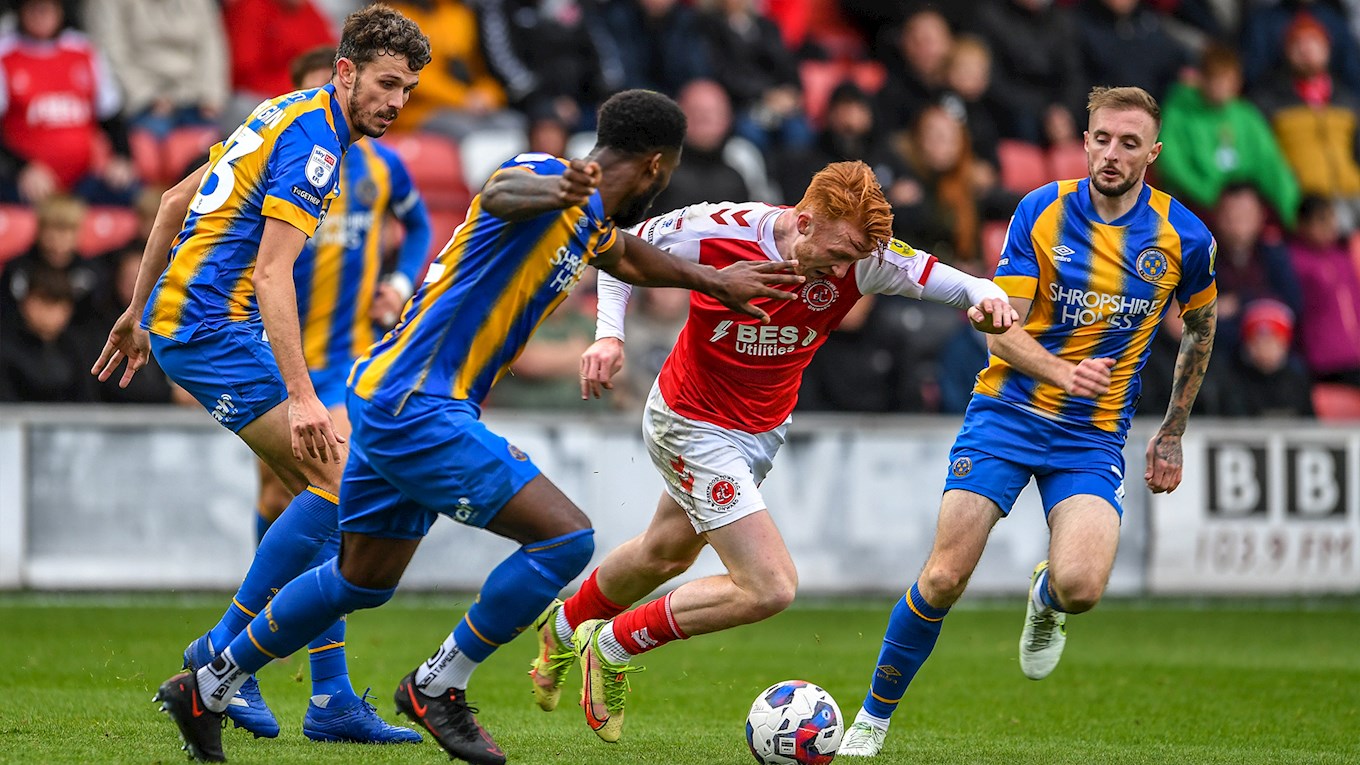 The young Red Devils have made a perfect start to their Papa Johns cup run this season as they have picked up six points from their opening two games, with their last game ending in a 2-1 win over Barrow at Holker Street.

Two players who have played in the first-team for Manchester United, Charlie McNeill and Alejandro Garnacho, scored the goals in their win over Barrow. The English striker netted the first from the spot after stepping up to take a penalty and, after an own goal from Tyler Fredricsson, it was all to do all over again for the Reds. They pushed until the end and their Argentinian forward found the winner seconds from time to secure the win.

Before that, they travelled to Brunton Park where they faced a tough test against Carlisle, but they still managed to break the deadlock in their 2-1 win. McNeill netted the opener five minutes before the break. Even though Jamie Devitt levelled it up midway through the second half, Omari Forson scored a pivotal as it put United back into the lead 19 minutes from time. 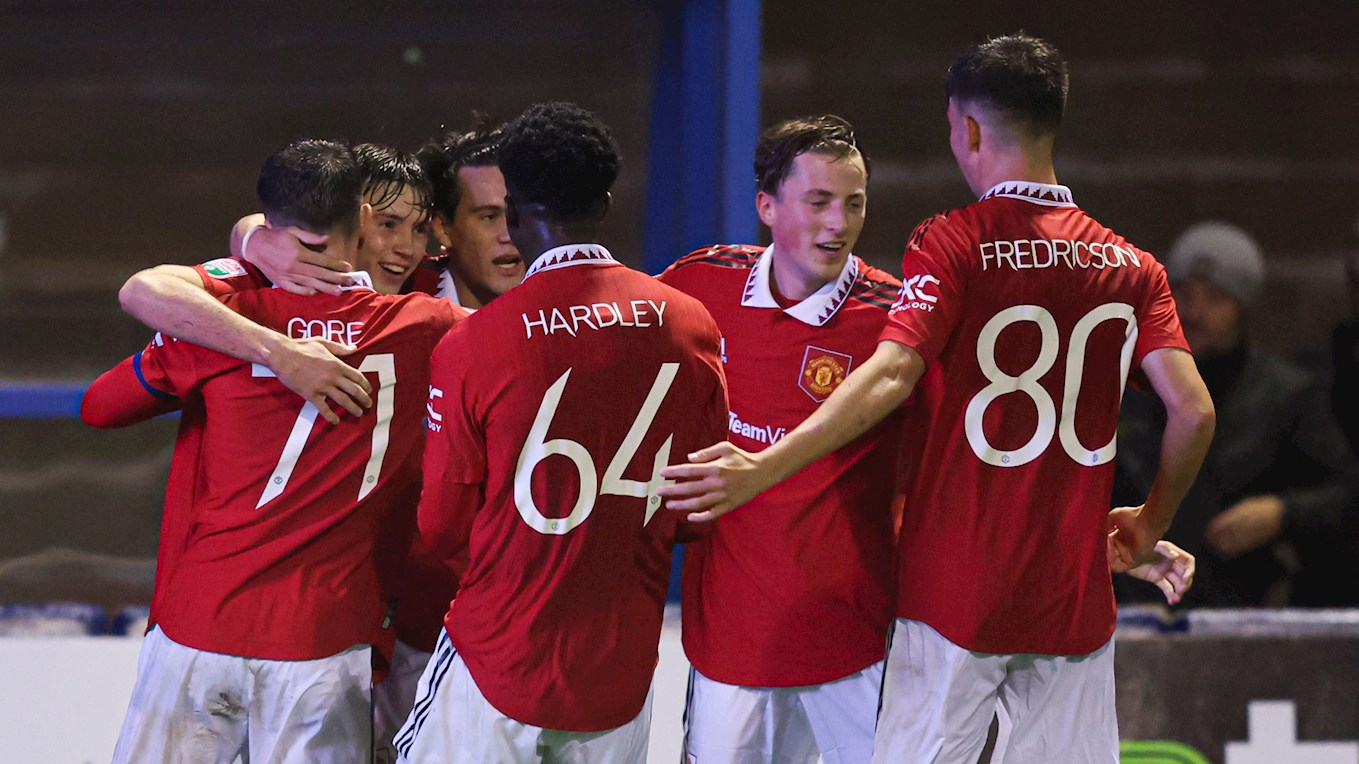 iFOLLOW DETAILS FOR THE CUP TIE

For Town's cup clash against the Red Devils, there will be two matchday packages available for our UK-based and overseas supporters: Audio Match Pass (£2.50) and Video Match Pass (£10.00). 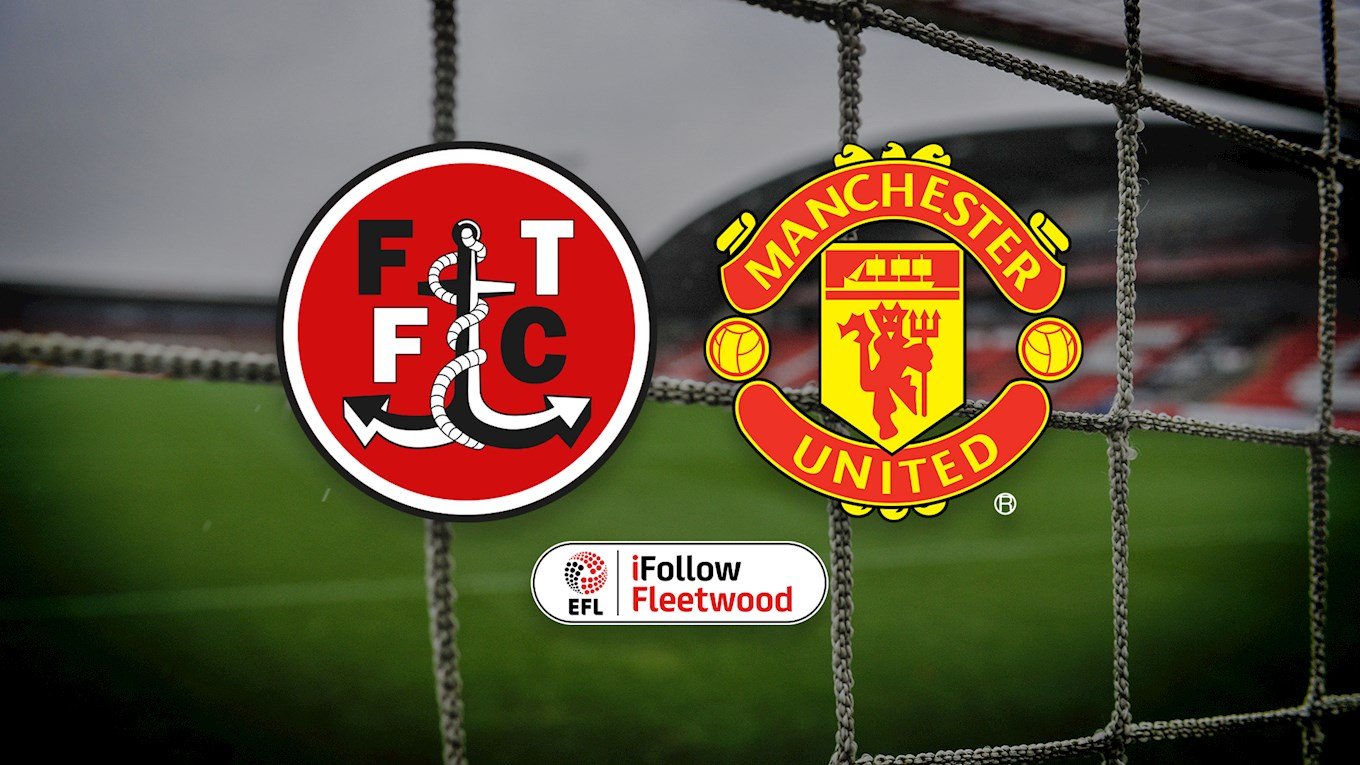 GET YOUR ONWARD CARD TODAY 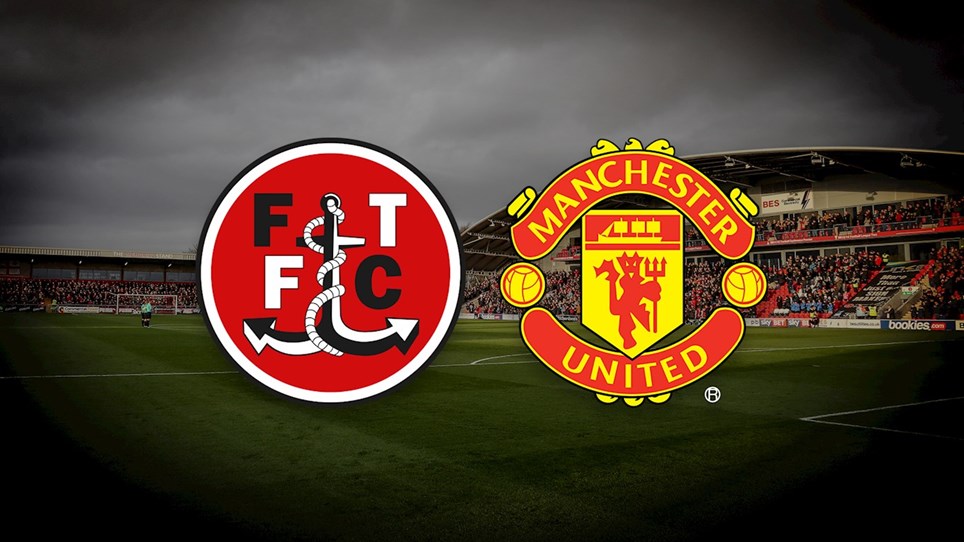 Fleetwood Town’s Papa Johns Trophy run came to an end at Highbury on Tuesday night even after winning their game against Manchester United Under-21s on penalties.

Second half goals from Carlos Mendes Gomes and Joe Garner looked like they were enough to pick up three points in the cup clash, but an injury-time goal from Shola Shoretire meant the game would go to penalties. Jakub Stolarczyk saved two to give us a platform, with Cian Hayes scoring the winning penalty soon after.

Town started the game the better side as they created multiple chances in the opening minutes. The first came from Max McMillan who cut in from the left and fired an effort towards goals, but it was cleverly blocked by the visiting defence and cleared.

It didn’t stop there though as Joe Garner then had tow quickfire chances, heading Dan Batty’s corner kick on target, forcing a save out of Nathan Bishop, before he tried his luck from range, but fired wide of the far post.

J.Garner could have opened the scoring after connecting with a deep free-kick soon after, but it was the Red Devils who did break the deadlock not long after this. Harrison Holgate thought he had won the ball in the box, but the referee waved for a penalty, which McNeill converted.

Just before the half-time break, the young Devils had one more chance as Isak Hansen-Aaroen played the ball across a packed Fleetwood box to Sam Murray, whose effort was blocked and cleared by Holgate. Town then went down the other end and Hayes forced a save out of Bishop.

Scott Brown’s side came out after the break looking the better side as they worked two chances from the off which troubled Bishop between the sticks. United then went down the other end of the pitch with Omari Forson, who cut in from the right and fired just wide of the far post.

After a cluster of changes for both sides, it was Town pressure that made all the difference as they managed to turn the game on its head. Mendes Gomes found the back of the net to level the game up as his chance beat the goalkeeper after a deflection from the United defence.

Then, J.Garner added onto that just five minutes later as he picked up the ball in the corner of the box and delicately chipped the ball over the crowded area and into the top corner, leaving Bishop no chance, making the game 2-1.

Knowing that they needed to win by two, the pressure carried on as Bishop spilt Paddy Lane’s shot from 20-yards into the path of Shaun Rooney, but he was stopped by a defender who cleared the ball only to Sam Glenfield whose shot went wide of the mark.

With not long to go, it was fluid football from two young Cods as Hayes dribbled past a couple before picking out Carl Johnston on the edge of the box, who turned brilliantly, however, his effort flew over the bar.

It was heartbreak at the end as United pulled it back to level terms in added time. Tom Huddlestone, who came off the bench midway through the second half, played a perfect pass to Shoretire who turned a fired the ball into the back of the net meaning penalties were added to the agenda.

Johnston, J.Garner, Rooney, and Lane all beat Bishop from the spot with Stolarczyk saving spot kicks from Joe Hugill and Shoretire. Hayes stepped up to take the all-important penalty, which he passed into the bottom right corner.

Make sure to grab your tickets so you can support the lads in their Papa Johns Trophy cup clash against Manchester United Under-21s tomorrow night!

The cup fixture, which is set to take place on Tuesday 18 October at 7:45pm, is the final group stage match of this year's competition and this one will be against the Red Devils' stars of the future.

From just £10 for adults, you can come down to the home of the Cods and potentially watch the likes of Alejandro Garnacho, Charlie McNeill, Charlie Savage, and Zidane Iqbal.

To buy your tickets today, visiting supporters can head to our online store HERE with home supporters heading to the following link HERE - you will have to act quick as they are first come, first served - once they are gone, they're gone. 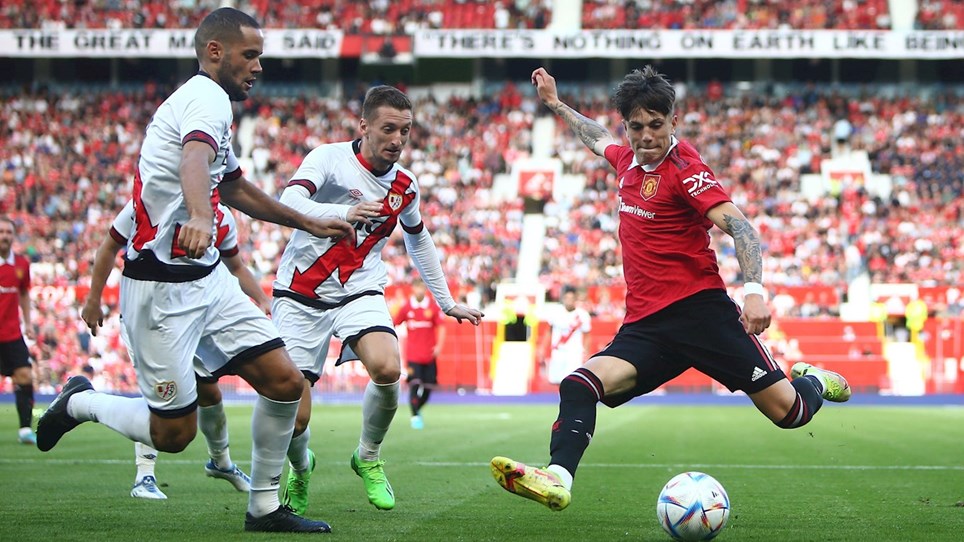 
Fleetwood Town can now confirm tickets for both sets of fans are now available for our Papa Johns Trophy tie against Manchester United Under-21s at Highbury. 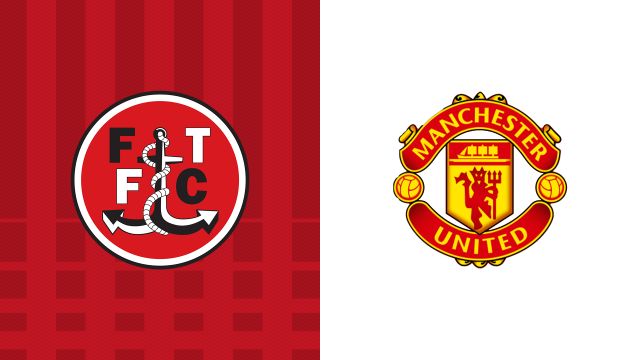 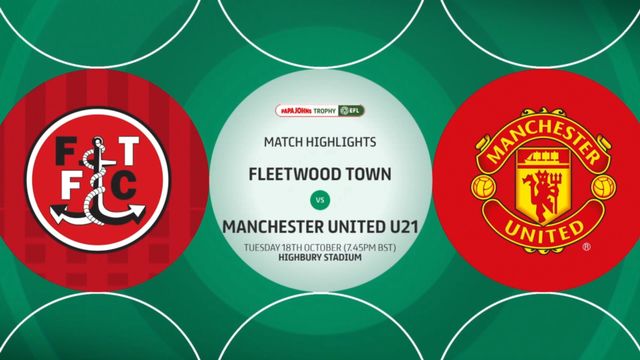 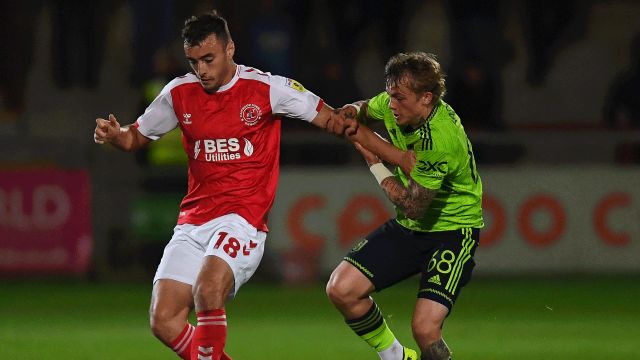