Fleetwood Town are set to face Forest Green Rovers at Highbury Stadium on Tuesday 25 October, and we have all the information you need to know ahead of the 7:45pm kick-off in our match preview.

The Cods come into this game off the back of a narrow 2-1 defeat away at Exeter City. Despite scoring first with a calm finish from Luton Town loanee, Carlos Mendes Gomes, it was the hosts who scored moments later through Jay Stansfield, with Sam Nombe getting the winner late into injury time on his 24th birthday.

Scott Brown's men will be wanting to get back to winning ways when Forest Green Rovers visit the Fylde Coast. With Forest Green in the relegation zone as it stands, it will be a good chance for the Cod Army to create some space between themselves and those in and around the bottom of the Sky Bet League One table.

Injury wise, Lewis Warrington could be back in contention after missing out on Saturday's trip to Exeter. Toto Nsiala is still a doubt after picking up his injury away at Portsmouth earlier this month. Shaun Rooney is back following his one match suspension after picking up five yellow cards. 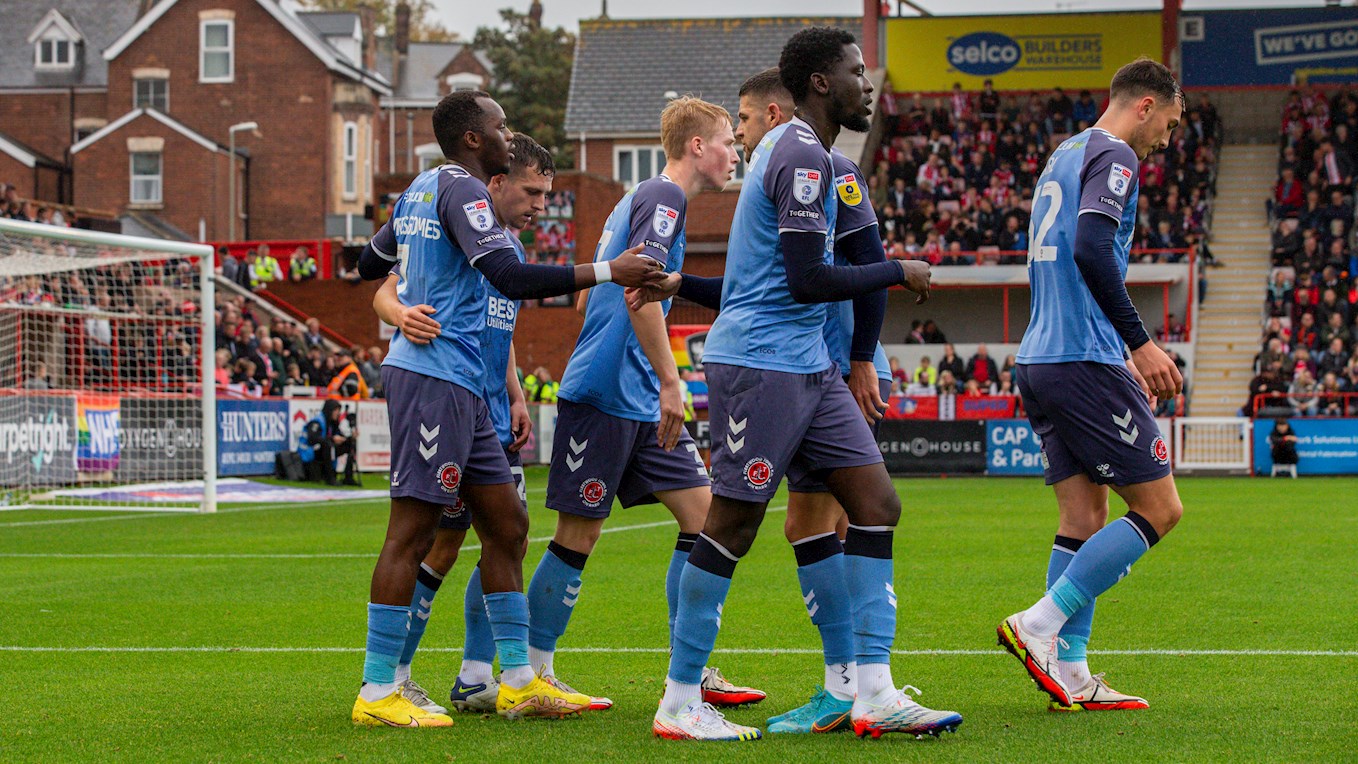 Forest Green currently sit 22nd in Sky Bet League One after picking up 12 points from their 15 matches played. Their last match saw them lose 1-0 at home to Portsmouth, with Sean Raggett scoring the only goal of the match midway through the first half.

After securing promotion to from League Two in May 2022, the new arrivals to the third tier of English Football have struggled to adapt to life up the leagues. They lost their manager Rob Edwards to Watford at the start of the season, with new man Ian Burchnall in the dugouts these days for the visitors to Highbury on Tuesday night.

Connor Wickham is the one to watch, with the former Ipswich and Crystal Palace striker having scored 5 goals this season already. His late goal was in Forest Green's 1-0 win over Bolton Wanderers on home soil, with the forward looking to add to his tally in midweek. 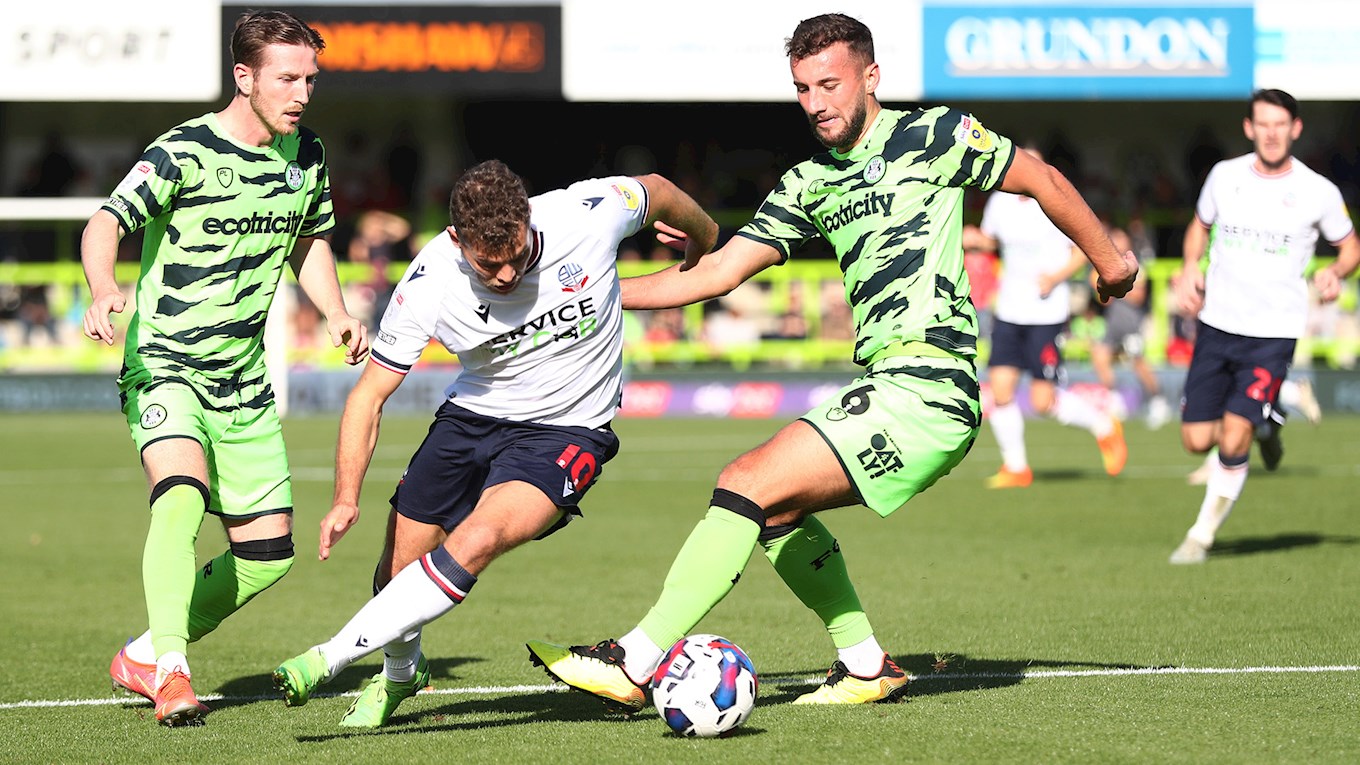 “The fans were incredible; they drove seven hours down here to come and watch us and I’m just disappointed we weren’t able to get a result for them because we could have easily held that game out.

“[Jay] Lynchy looks after himself and that’s what he does every day, he’s got a fantastic work rate and has a good way about the place – he wants to work and improve – you want 11 players like that.

“Looking forwards now, we need to make sure we create more clear-cut chances and work more on the attacking than on the defenders as I thought the two centre-halves did well against two physical strikers that work hard for 90 minutes and cause a lot of team’s problems.” 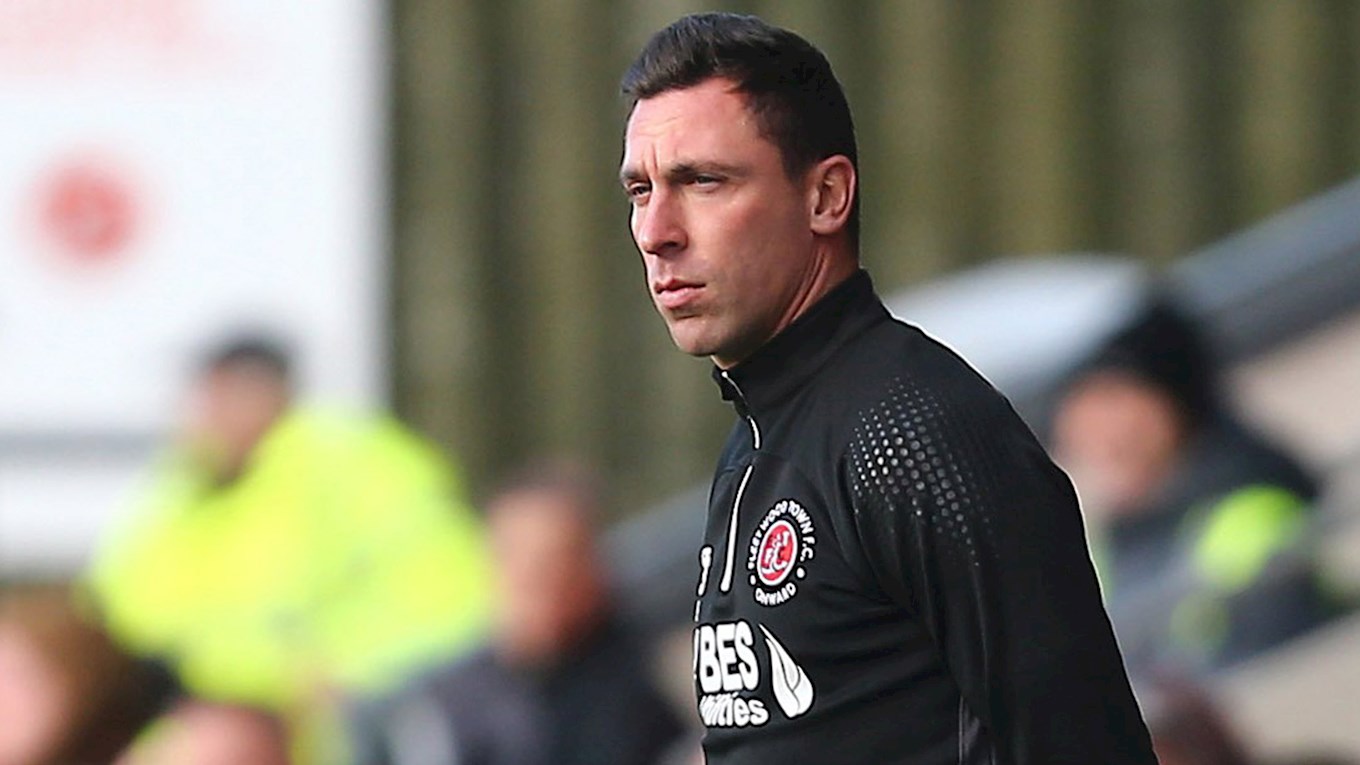 *Both U.K and overseas supporters can watch the full match live on iFollow! 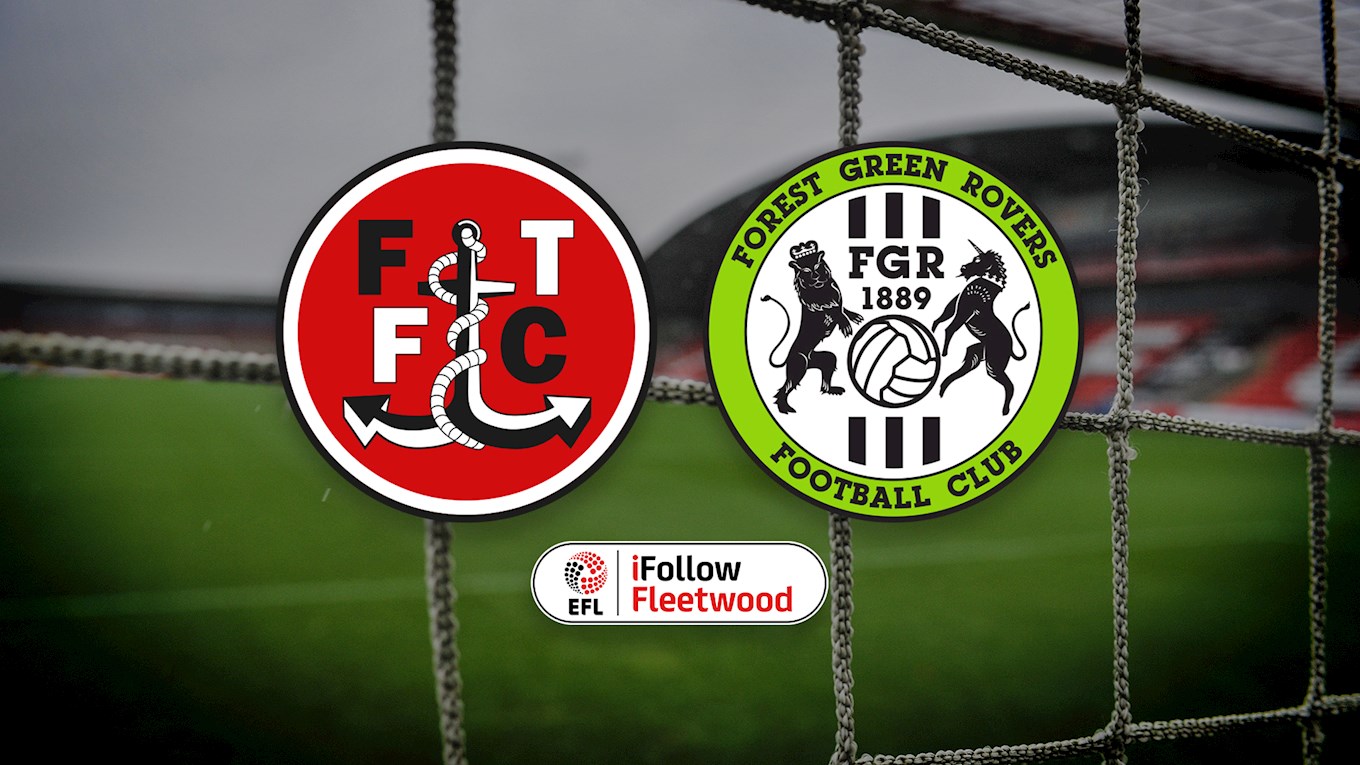 Fleetwood Town played out a 1-1 draw with Forest Green Rovers in Sky Bet League One on Tuesday evening.

Rovers took the lead early in the first half as full-back Corey O’Keeffe whipped in a free-kick from the right into a packed box, where Harvey Bunker nodded past Jay Lynch at his near post. Town then came back into it in the second half as Callum Morton converted Shaun Rooney’s cross.

The first chance of the game came in the fourth minute as Forest Green Worked their way down the right with O’Keeffe, who lofted a cross into a packed Town box and found the head of Bryan Fiabema, but his header was headed off the line by Harrison Holgate.

Fleetwood had an effort of their own 10 minutes later as Rooney picked up the ball in his own half before driving forward and picking our Callum Morton. He tried his luck by attempting to place the ball past Lewis Thomas, but the ‘keeper got down well to push it just wide of his post.

Just after the quarter-hour mark, Forest Green were in once again as Regan Hendry lined up his sights from the edge of the box and Drew Baker slid and got in the way of that one, with the ball then bouncing to Connor Wickham, whose shot went just wide of Lynch’s goal.

The lead should have been Fleetwood’s just after that as Morton took down a lofted cross brilliantly with his chest and volleyed it towards the goal, with the effort crashing against the post. It was action-packed around the half-hour mark as Joe Garner saw his header from a corner go just wide.

Forest Green then took the lead as Bunker latched onto O’Keeffe’s free-kick which was played into a dangerous area – the centre-half nodded the ball past Lynch to put his side into the lead.

Luck wasn’t on the side of Scott Brown’s team as Carlos Mendes Gomes had his shot from close range stopped by Thomas, Cian Hayes’ effort where he tried to place the ball into the goal was blocked on the line, and Town’s number had another shot saved after lining one up from the edge.

The attacking pressure continued into the second half as a couple more chances were worked by the Cods. First was a header from J.Garner, from Danny Andrew’s cross, which went just wide, and the second was Drew Baker latching onto Rooney’s cross but nodding the ball off target.

It all paid off as, after a flurry of substitutes for both sides, Rooney drove down the wing and played a low cross into the centre, where Morton was standing, and he decided to go with a tricky strike to pull off as he backheeled the ball into the back of the net, making it 1-1 with 20 minutes to go.

Town looked for a winner through J.Garner as Andrew whipped a cross in for him to attack, and that he did, but his effort was off target. This left gaps though as Forest Green also wanted to find the winner – substitute Armani Little thought he’d done that when had a chance from inside the six-yard box but, again, the shot went wide of Lynch’s far post.

Tickets are still on sale for Fleetwood Town's Sky Bet League One match against Forest Green Rovers on Tuesday 25 October at Highbury Stadium.

With Town looking to get back to winning ways after their defeat at the weekend away at Exeter City, you can play your part in being the 12th member of the team by purchasing your tickets ONLINE, or at the Ticket Office at Highbury from 9am on Monday morning.

Here are the full ticketing details for Tuesday's match:

Onward Card holders can pay £30 to upgrade their match ticket to a seat in hospitality. If you fancy a seat on the balcony and live entertainment, get in touch with the Club today! 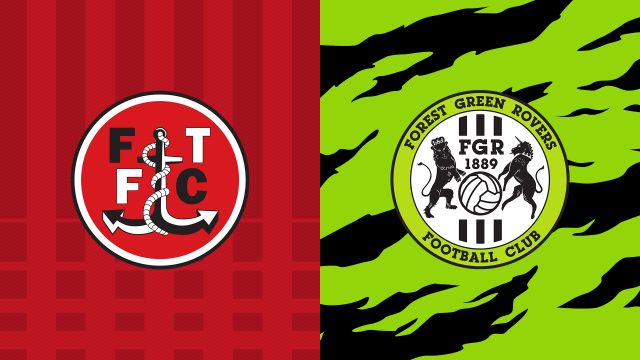 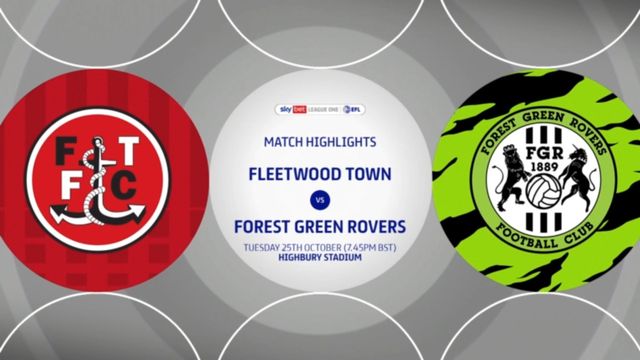 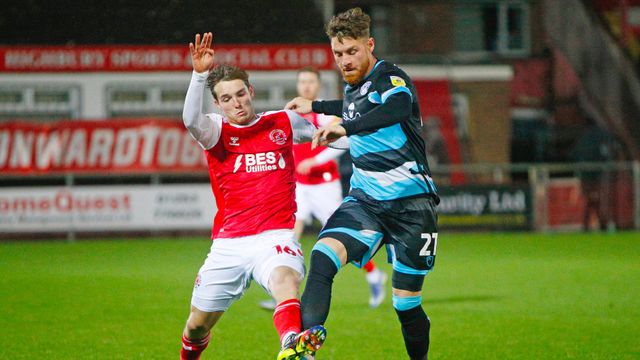