Fleetwood Town face Wigan Athletic on Saturday 5 September at Highbury Stadium in the Carabao Cup, and we have all you need to know ahead of the 3pm kick-off in our match preview. 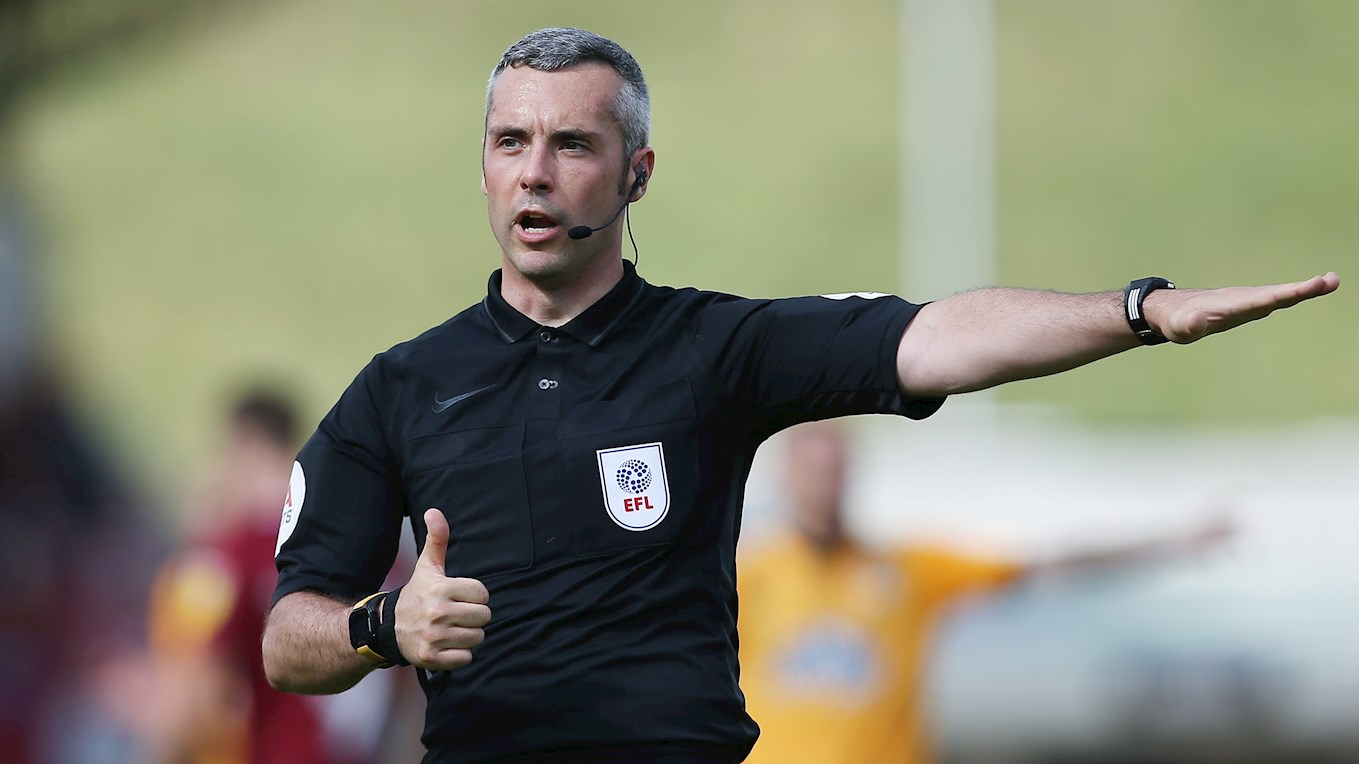 Fleetwood Town are going into this Carabao Cup Round One tie on the back of a 3-1 win over Carlisle United in the EFL Trophy on Tuesday night.

Callum Camps opened his tally for the season in the first half of that game – which happened to be his competitive debut for the club – after slotting the ball in the bottom right corner past Paul Farman.

Harvey Saunders also got his first two goals for the club after scoring two brilliant headers on the night. The first was a diving header at the back post to level up the scoreline, and for the second, he rose highest in the box, heading it over the keeper. 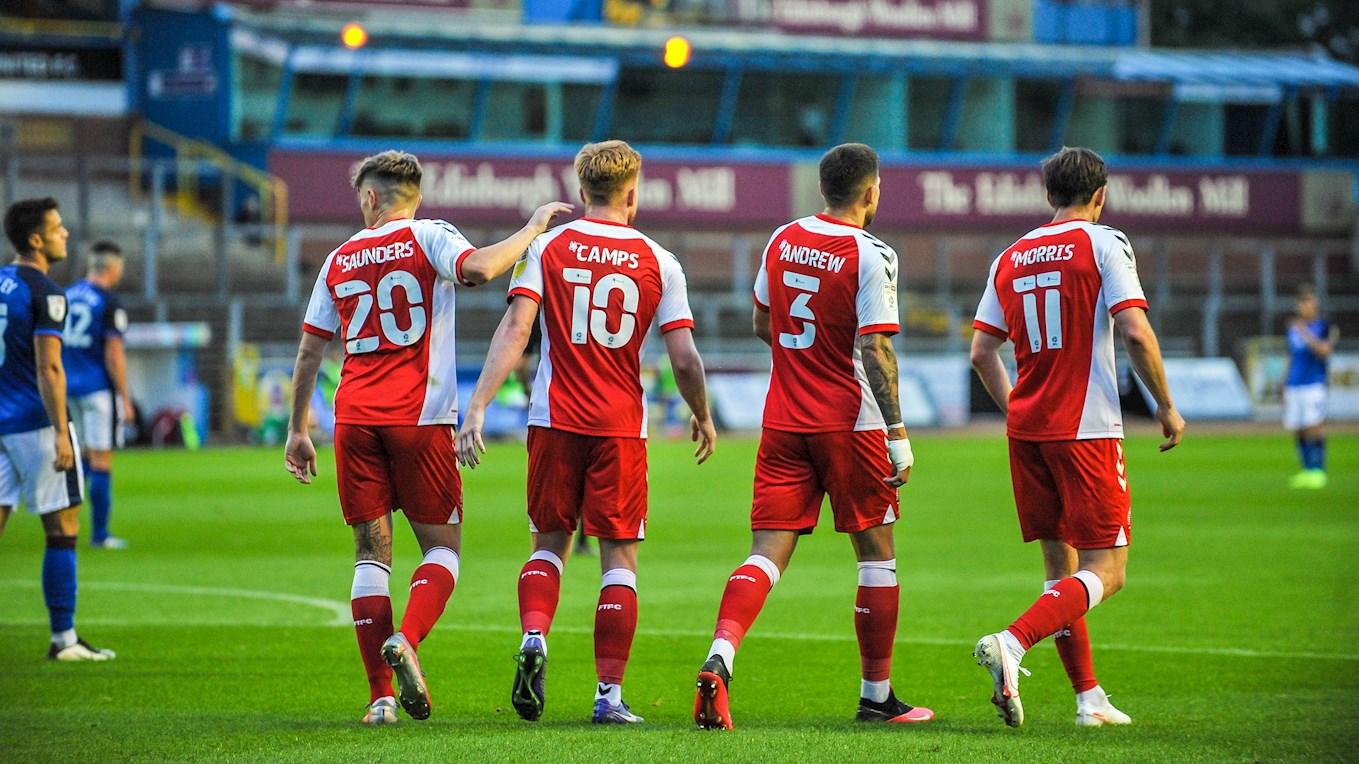 Wigan are yet to start their competitive fixture schedule for the season and have been preparing with pre-season friendly ahead of their visit to Highbury Stadium.

Their last game saw them travel to Bradford City, where they played out a 3-2 win over the Bantams. Leam Richardson’s side took the lead one minute into the game as Kal Naismith finished off a corner routine straight from the training ground. He would later complete his brace in the game, with Gary Roberts also scoring on the day. 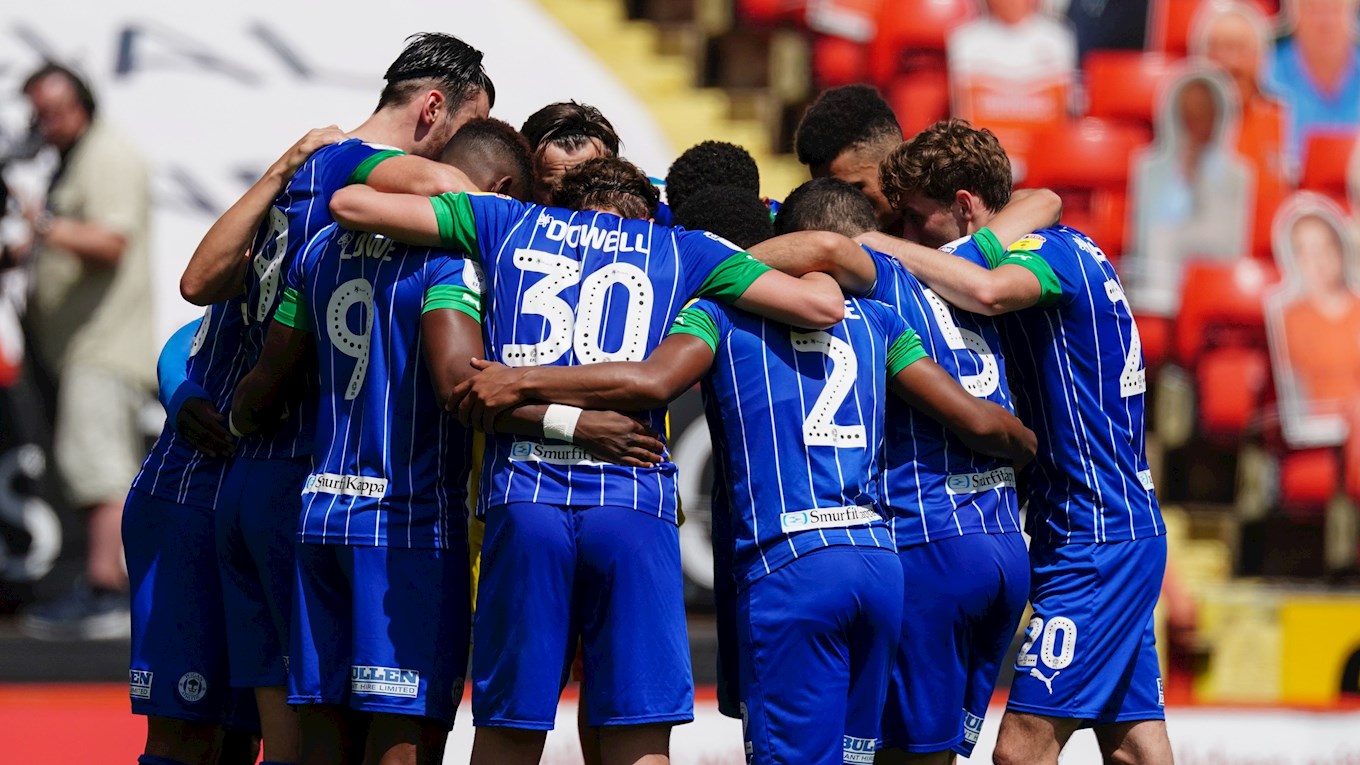 On the Carabao Cup tie, he had this to say: “All we can do is prepare our boys for the game and, if we focus on us, we will have a good chance of getting a good result.

“Obviously, we want to beat them on Saturday, but we hope that they can get sorted out because nobody at that football club deserves what has happened to them. Your heart goes out to them and hopefully it turns round for them.” 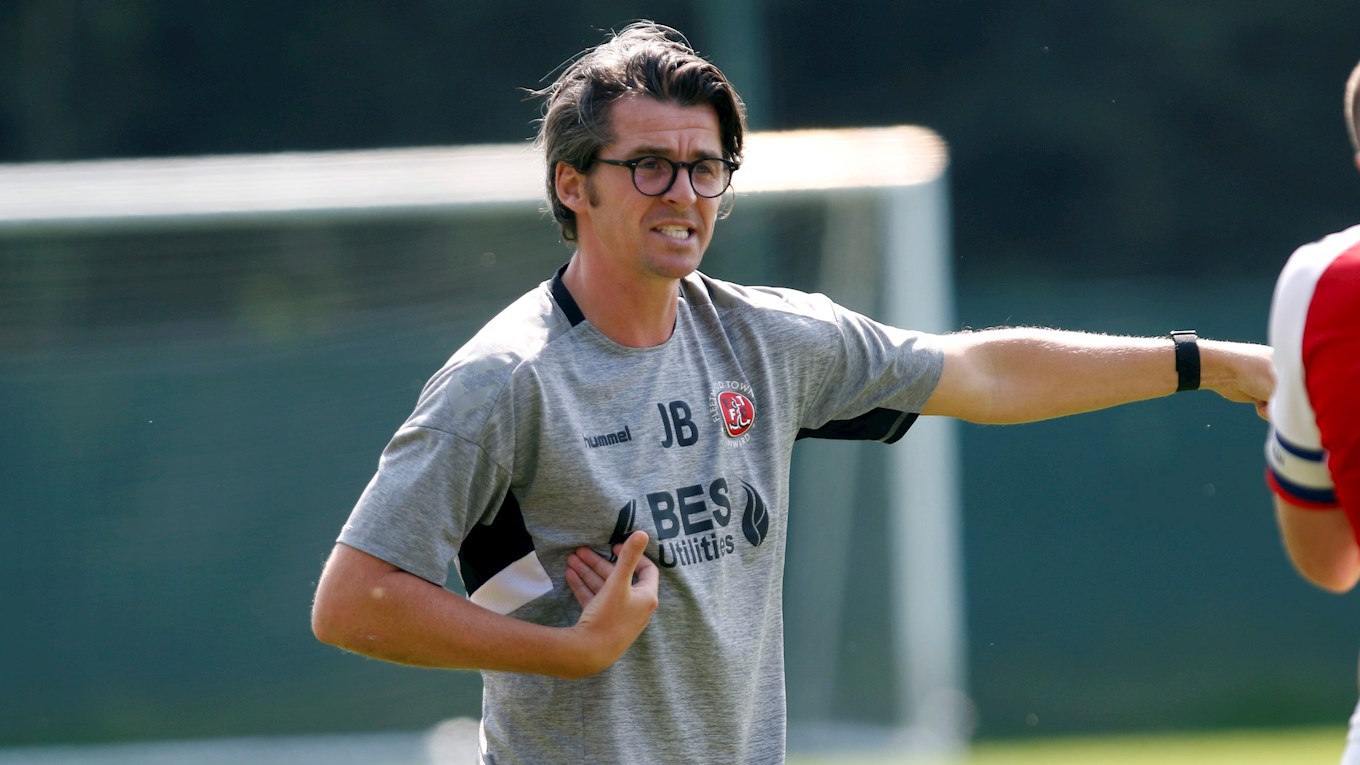 ONE TO WATCH – KAL NAISMITH

One for Fleetwood fans to keep an eye out for is midfielder, Kal Naismith. The 32-year-old managed to score two goals in Wigan’s last pre-season friendly against Bradford City last Saturday, netting the opener within a minute of starting the game, and getting his second ten minutes into the second half.

The midfielder has had a long career, which started in the 2011/12 season with Rangers. Whilst at The Gers, he spent time on loan at Cowdenbeath and Partick Thistle, before getting a chance at his parent club in a Challenge Cup game against Brechin City.

After that, featured in Accrington Stanley and Portsmouth sides before making the move to Wigan in 2018. Naismith joined The Latics back in May 2018 and has played in over 60 games since then. 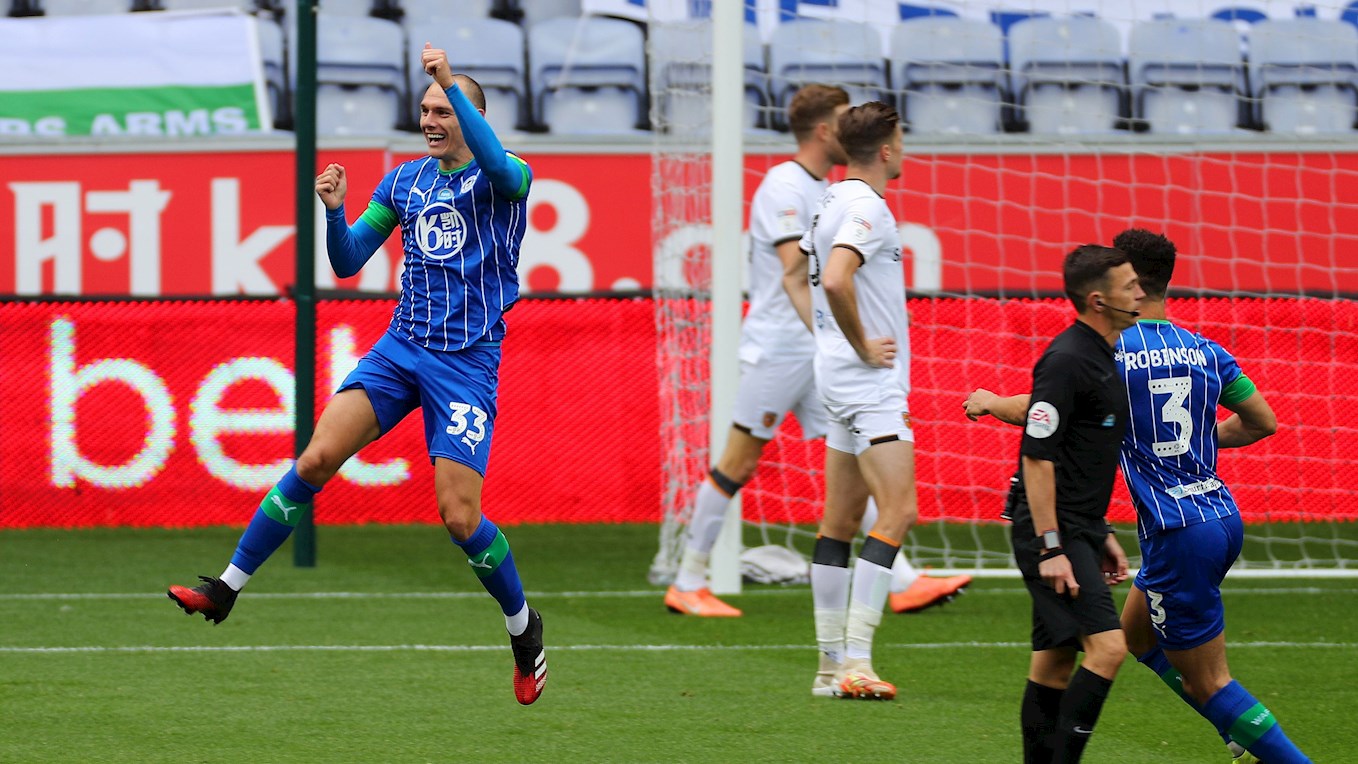 Supporters can now purchase video match passes for Fleetwood Town’s Carabao Cup Round One tie against Wigan Athletic on Saturday. 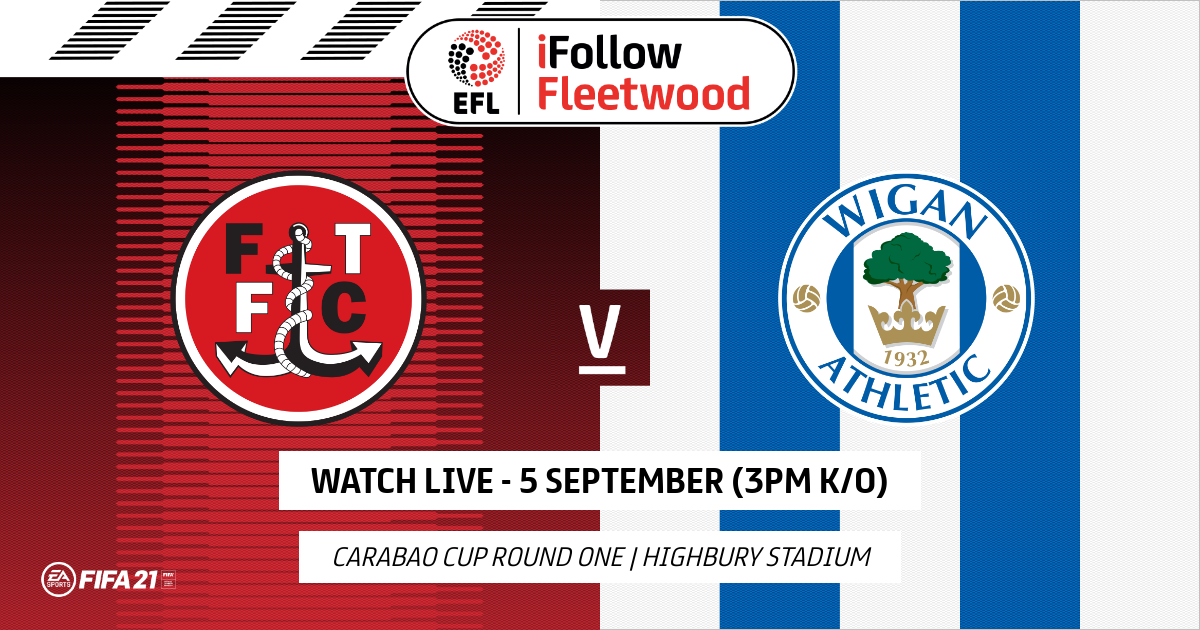 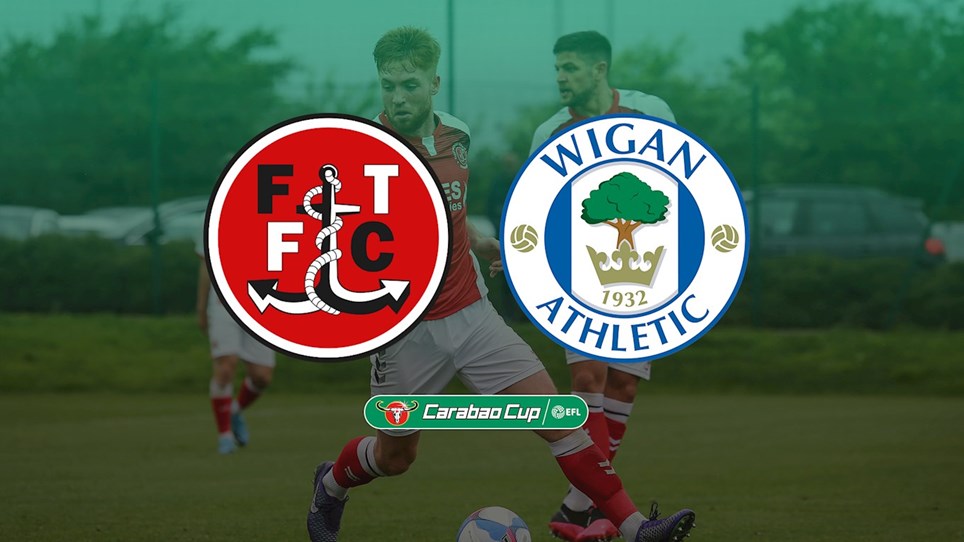 Fleetwood Town earned their place in the second round of the Carabao Cup on Saturday afternoon after beating Wigan Athletic 3-2 at Highbury Stadium.

Wigan took the early on through Joe Garner, who later on completed his brace giving the away side a two-goal lead in the first half. Fleetwood brought the game back to 2-2 after goals from Ched Evans and Josh Morris, before the former headed past the Wigan keeper to earn a spot in the next round.

The first chance of the game fell to the visitors, which saw them take the lead just two minutes into the game. Tom Pearce looped a cross over the head of Danny Andrew, finding Garner at the back of the box who struck the ball past Joel Coleman.

Fleetwood grew into the game and in the 10th minute, they should have drawn level. Glenn Whelan played the ball to Josh Morris on the left who fired an effort goalward, forcing the Wigan keeper into a smart save, the ball rebounded to Harvey Saunders whose shot went over the bar.

Soon after, Callum Camps found himself with a yard of space on the edge of the Wigan box, and decided to try his luck, with his shot stinging the palms of Jamie Jones.

The visitors doubled their lead on the half-hour mark, as a free-kick from the left was whipped into the six-yard box, and after some jostling, Garner went down, and the referee pointed to the spot. Garner picked stepped up to take the spot-kick and sent Coleman the wrong way.

Fleetwood responded well and halved the deficit five minutes before the break. A perfectly weighted cross from Wes Burns was met by Evans, who guided his header into the bottom right corner, past Jones.

Both sides could have scored in added time at the end of the first half. First, Gary Roberts curled his shot towards the top right corner, but it hit the bar and bounced out before it was cleared by the Fleetwood defence.

Less than a minute later, Morris had a near-post header six-yards out, which clipped the edge of the post.

The home side carried on the pressure until the break as Evans had two more chances in quick succession. The forward first had a header tipped past the post, before his low-driven effort was clawed off the line.

Barton made one change at the break a Mark Duffy came on for his Fleetwood debut replacing Harvey Saunders.

Wigan had the first chance of the second half as Gary Roberts found Viv Solomon-Otabor, whose low shot was saved well. The ball then fell to Roberts but he struck the ball over the bar.

Just after the hour mark, Town struck level as Danny Andrew played a brilliant through ball to Morris, who after taking the ball down and composing himself, hit the ball into the top left corner, beating Jones.

After being two goals down, Fleetwood completed the comeback in the 77th minute as Evans – who scored Fleetwood’s first of the day - powered another header past Jones at the far post.

Evans had a few chances to complete his hat-trick late on as a low effort flashed across the face of goal before forcing a good near-post save from Jones moments later.

After a tense period of added time, the referee finally blew his whistle to ensure Fleetwood's Carabao Cup campaign will continue into the Second Round. 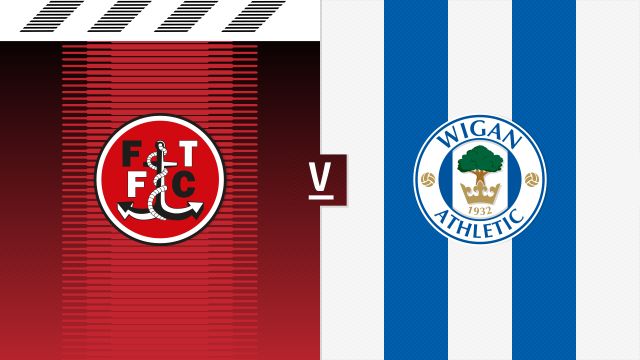 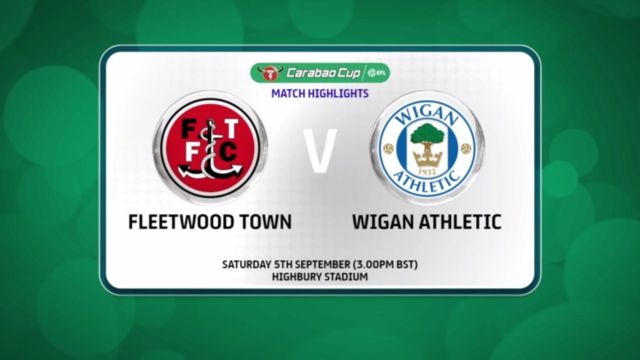 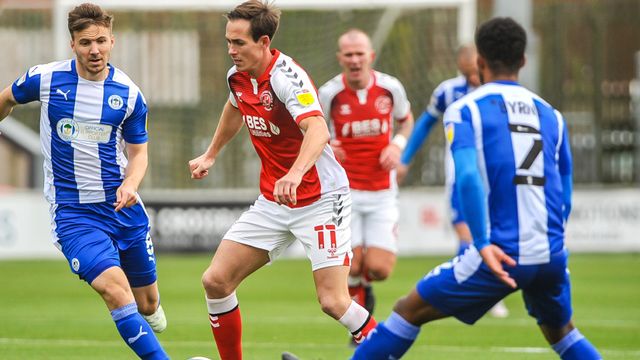