Fleetwood Town face Gillingham on Tuesday 9 March at Highbury Stadium in Sky Bet League One, and we have all you need to know ahead of the 7:45pm kick-off in our match preview. 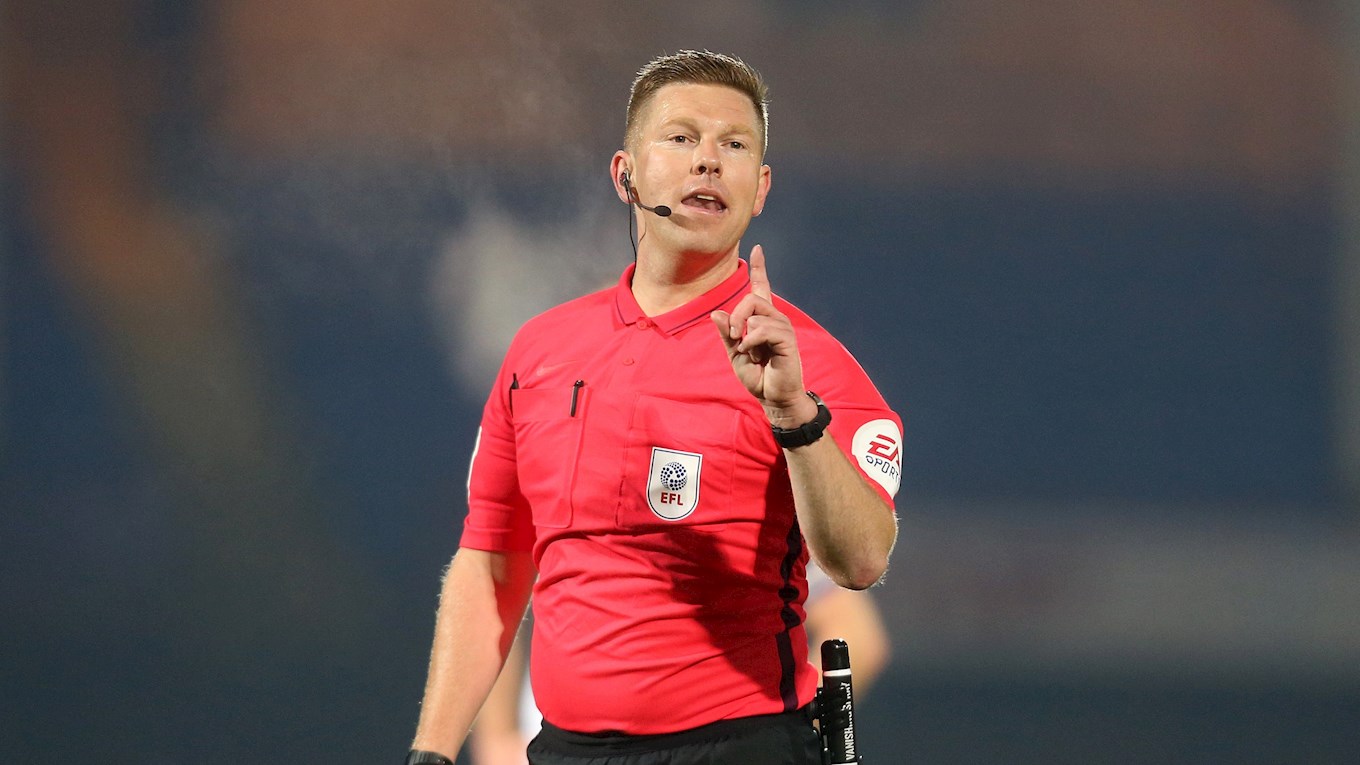 Town head into their clash against Gillingham on the back of two straight away victories against Lincoln City and Shrewsbury Town respectively.

Last time out, Goals from Wes Burns and Kyle Vassell saw Fleetwood travel back to Lancashire from Shrewsbury with maximum points in what was a comfortable 2-0 win for Simon Grayson’s side. Burns opened the scoring on the stroke of half-time with a strike from distance and, halfway through the second period, Vassell doubled the lead after a tidy move with Ged Garner.

In the game before that, Town come out 2-1 winners in their league clash against Lincoln City. Ged Garner’s first-ever league goal opened the scoring on the night, and what a goal it was. He controlled the ball inside the opposition’s box and volleyed it home. Callum Camps also got on the score sheet in the second half and, even though Lincoln substitute Callum Morton got a goal, Town took the win in Lincolnshire. 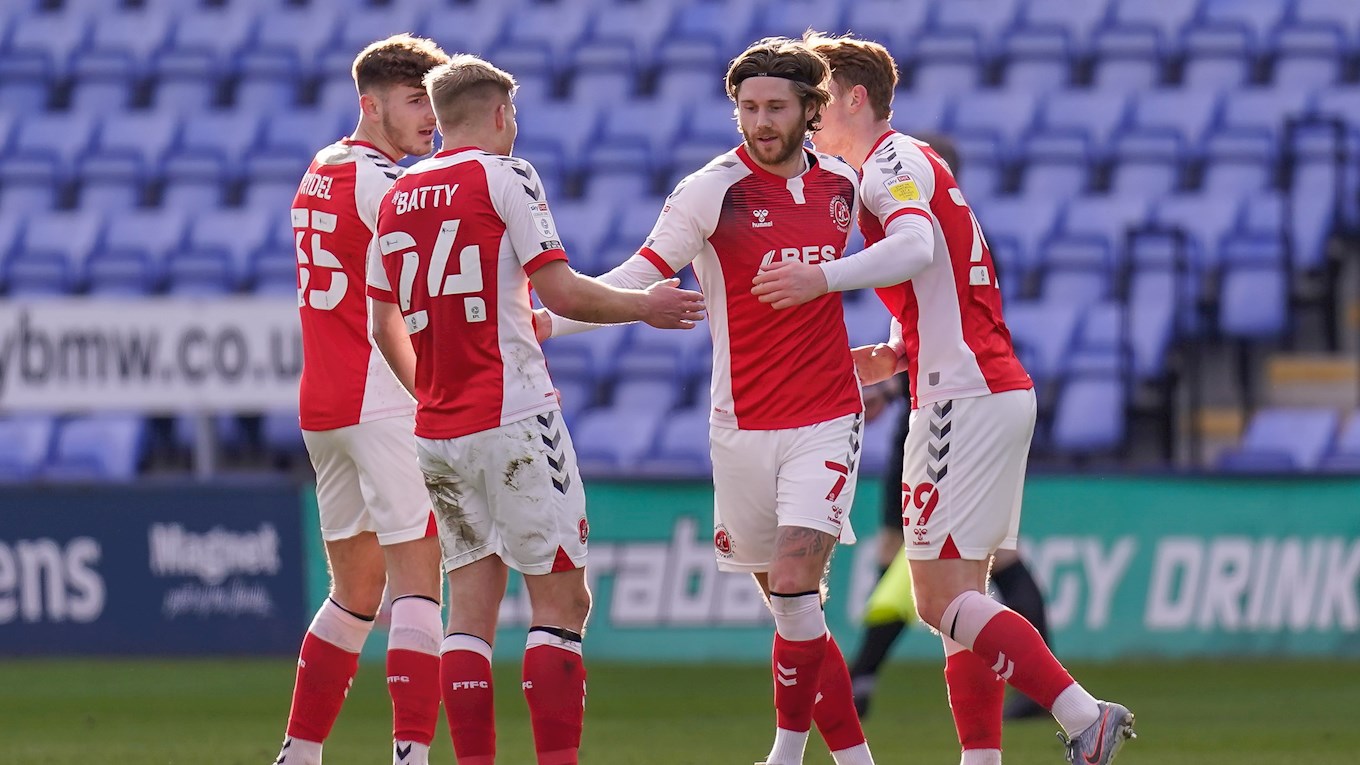 Much like Fleetwood, The Gills go into the game at Highbury after back-to-back wins in the league, meaning they are still unbeaten in the month of March.

They opened the scoring in their last game, which was against Ipswich Town, early on through Jack Tucker, and even though Luke Chambers drew the game level just after the hour mark, a seven-minute brace from Vadaine Oliver secured the points for Steve Evans’ side.

Before that, they managed to pick up all three points in their home fixture against MK Dons, even after the visitors took the lead in the opening five minutes. A Jordan Graham penalty pulled them back into it, and further goals from Oliver and Connor Ogilvie meant that Warren O’Hora’s goal on the stroke of half-time would be just a consolation. 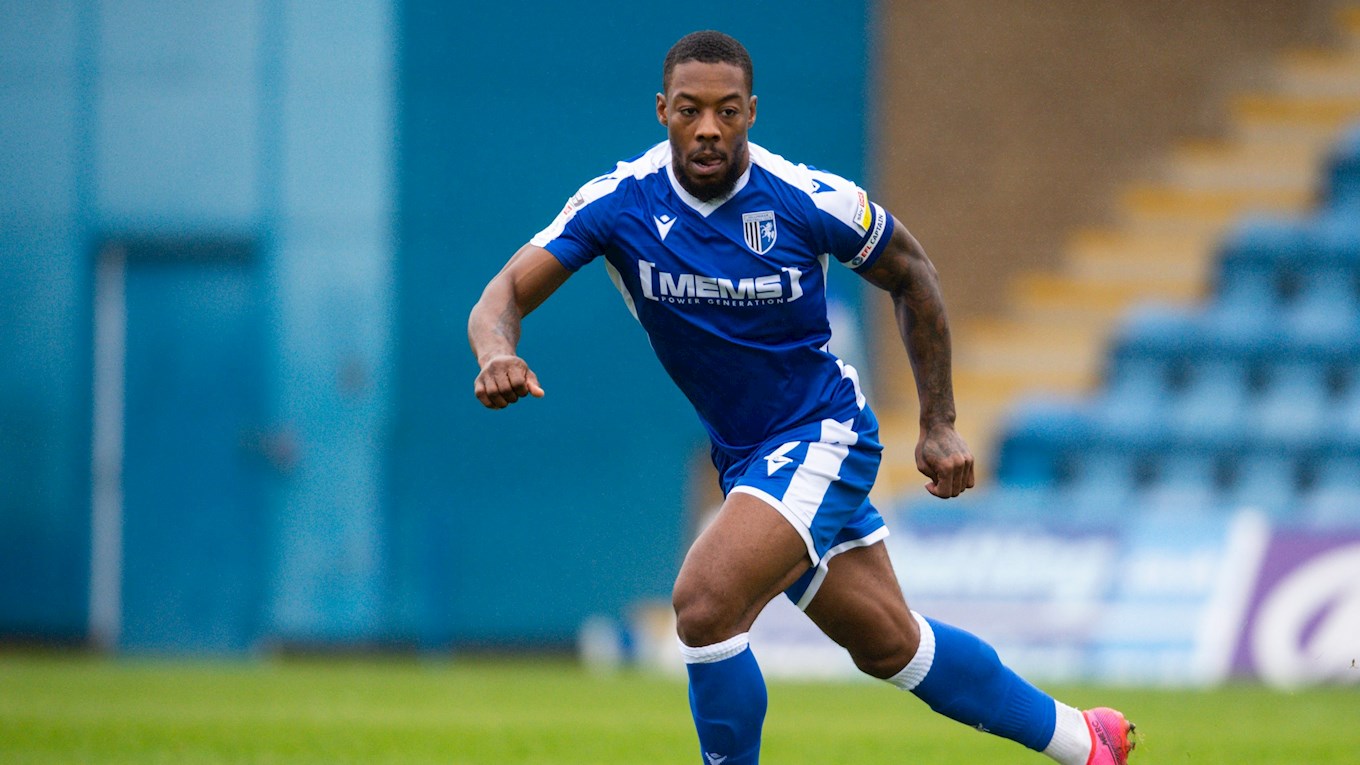 ONE TO WATCH: VADAINE OLIVER

The one to watch from The Gills is forward, Vadaine Oliver. The 29-year-old has been in top form in recent games, as he has managed to find the back of the net four times in only three matches.

Oliver started his career in the youth ranks at Sheffield Wednesday in 2011 and, a year after signing his first professional contract and no first-team appearances, he moved to Sincil Bank to join Lincoln City on a free transfer. The forward was successful with The Imps as he went on to make almost 40 appearances and score 13 goals in his one season there.

After Lincoln, he would then move on to Crewe Alexandra in June 2013 and he would keep his starting spot for the first season there, even though he wasn’t scoring as many goals, but was then loaned out to Mansfield Town for the following season, where he scored a further seven goals.

Another free transfer was on the cards at the end of the 2015/16 season, this time sending him to York City. Over 50 games, 14 goals, and a year-long loan spell at Notts County rounded up his time with The Minstermen and he was soon on the move again, this time to Lancashire side, Morecambe.

Oliver joined the League Two side in June 2017 and didn’t have to wait long for his first goal, which came in an EFL Cup tie against Barnsley that August. The striker would be a constant figure in the side for the two seasons he was there, and this attracted interest from Northampton Town, who signed him in 2019 on a one-year deal.

At the end of his time with The Cobblers, Steve Evans took him to Priestfield at the start of this season, and he has been in-form ever since. Not only is he the side’s highest scorer this season, but he has also been pivotal in their last three games, scoring decisive goals in all of them. 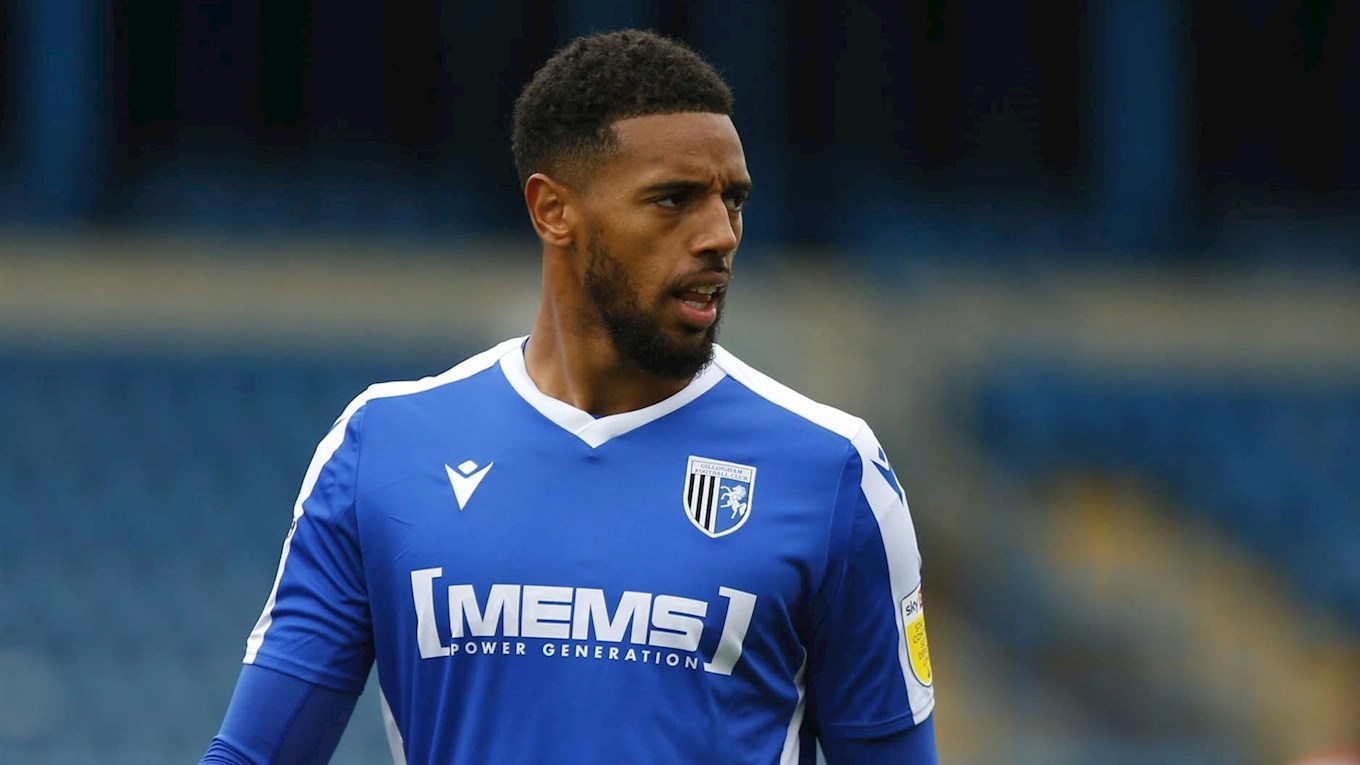 Simon Grayson's side are set to host Gillingham in a league clash at Highbury on Saturday and you can watch the game for just £10! 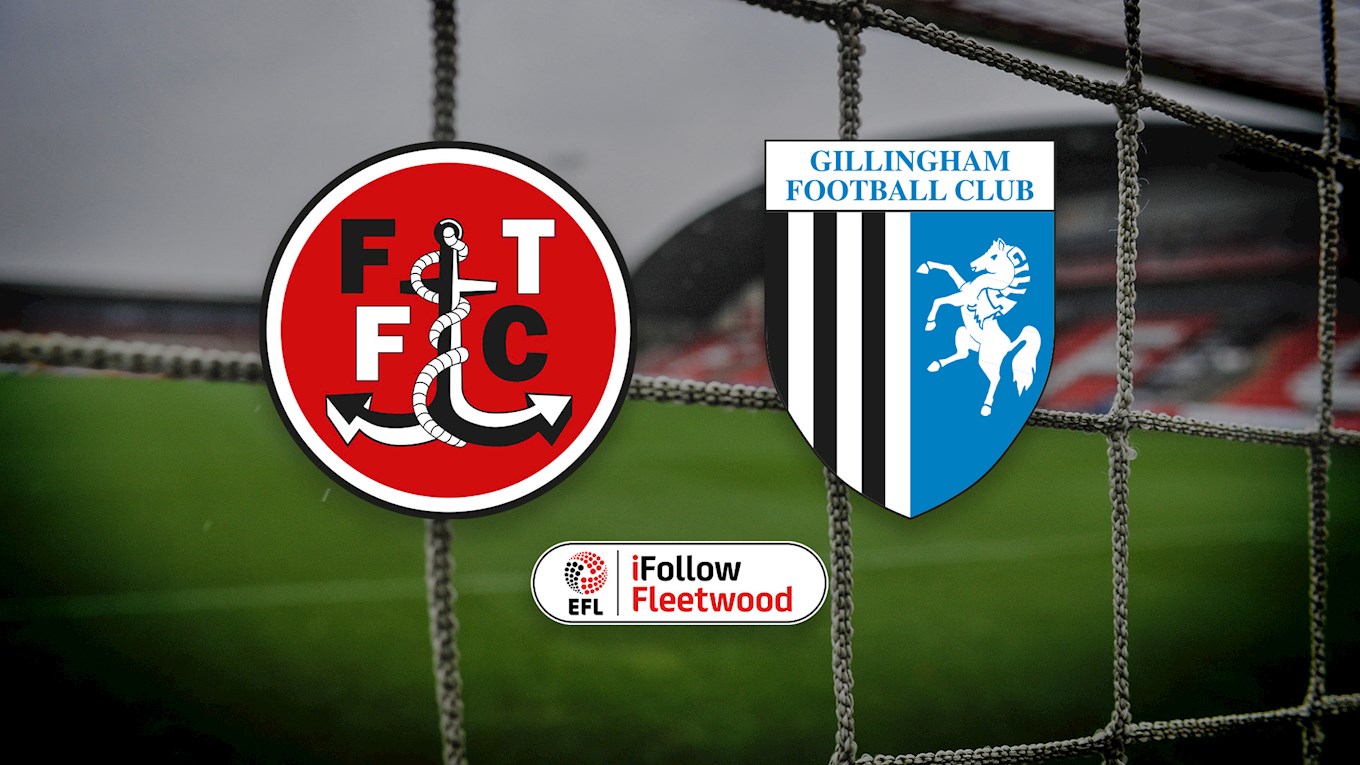 Fleetwood Town made it three wins in a row on Tuesday evening as they managed to beat Gillingham 1-0 at Highbury Stadium.

The deadlock was broken within the first two minutes as Kyle Vassell converted a penalty after Ged Garner was fouled inside the Gillingham box. Town looked the more likely to add a second goal to the tie as Vassell and Rossiter both had shots collide with the bar throughout the game.

The first chance of the game led to the opening goal as Ged Garner was pushed to the ground inside the Gillingham area, which resulted in a penalty for Simon Grayson’s side. Vassell then stepped up and put it in the back of the net, off the inside of the right-hand post.

A minute later, Town were on the attack yet again, through Garner, who drove forward through the midfield and dragged his shot just wide of the far post from 20-yards.

Fleetwood had a free-kick four minutes in, continuing the fast start, which was taken quickly and met the feet of Vassell but his effort is deflected out for a corner after hitting the crossbar.

20 minutes in, Town’s two frontmen - Vassell and Garner – both linked up yet again as the former worked his way through the Gillingham backline before forcing a near-post save from Jack Bonham.

Both sides battled it out after this, with half chances being worked but the next real chance was at the start of the second half as Dan Batty cut in from the left and decided to try his luck from distance, with his effort going just wide of the post.

In the 50th minute, Gillingham worked their way forwards and, even though play could have been stopped for a high-foot, substitute John Akinde carried on, but his shot was well dealt with by Alex Cairns.

Town were then on the ascent as they had two quickfire chances. The first was a run from Callum Camps, whose eventual shot was saved by Bonham.

Soon after, Bonham then cleared the ball from a counterattack to Rossiter on the halfway line. The midfielder then hit the ball the first time, trying to lob to the goalkeeper, but his shot bounced off the crossbar.

With 15 minutes to go, Gillingham came close to an equaliser as the ball bundled around the Fleetwood box before Akinde half-volleyed the ball towards goal, but the strike didn’t trouble Cairns.

A minute later, Fleetwood ran down the other end and played the ball to Batty, who struck the ball towards the Gills goal, but it flew over the bar.

Town then sat back and held on to the lead as Gillingham tried to find an equaliser but the game didn't see a second goal, which meant Fleetwood would take all three points from the tie 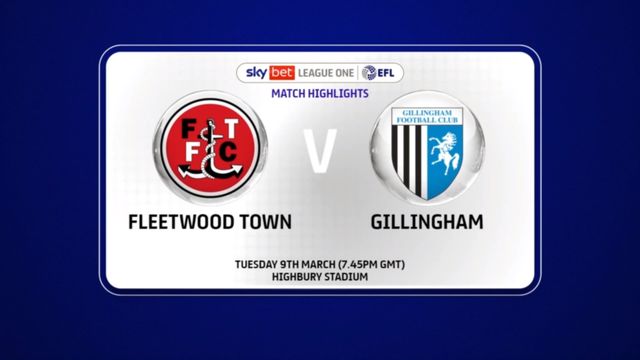 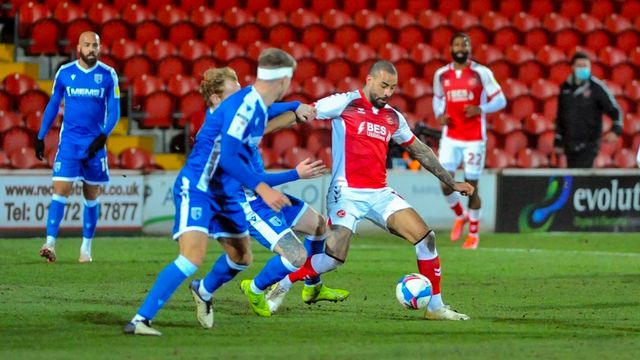