Fleetwood Town look to bounce back on Saturday when they face MK Dons at Highbury Stadium, and we have all you need to know in our match preview. 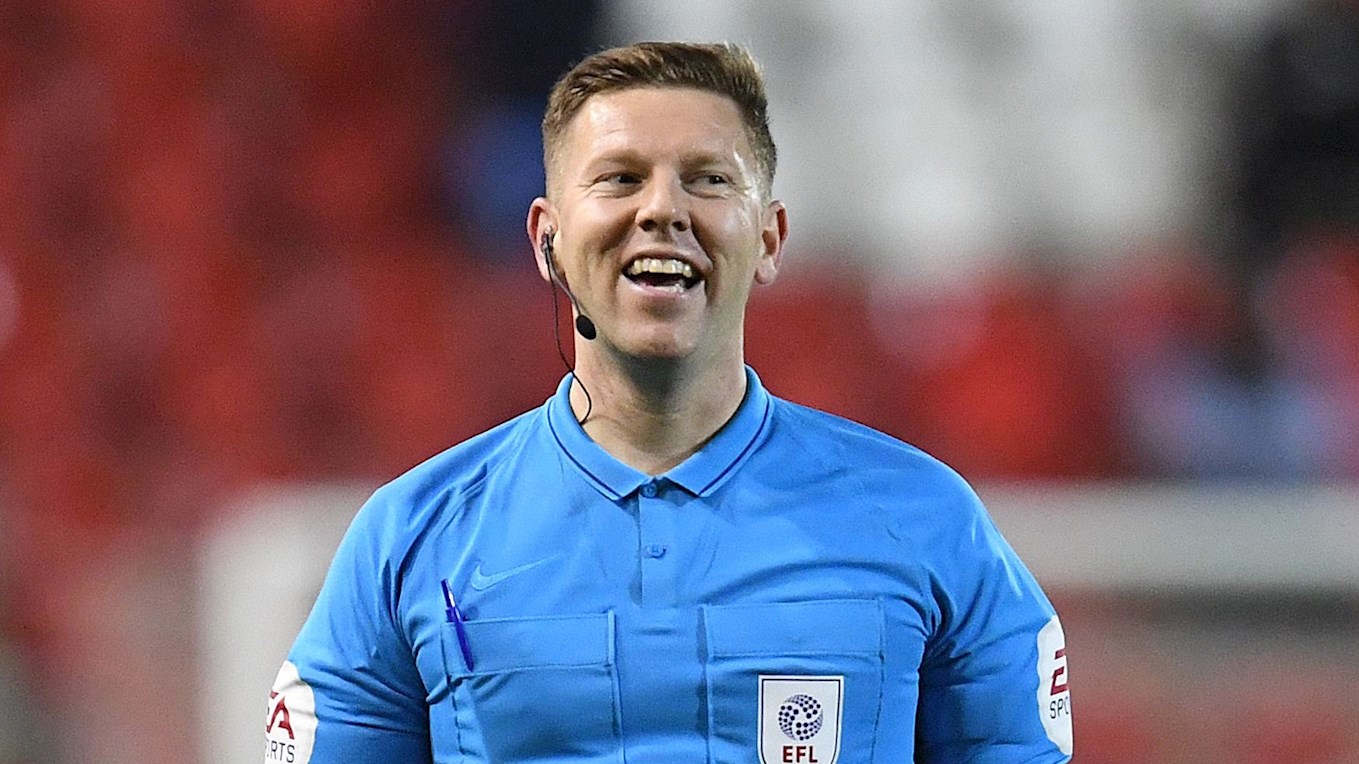 Fleetwood fell to 5th place in Sky Bet League One following a midweek loss to Coventry City, however they still sit four points off top with a game in hand.

The Cod Army will look to continue their impressive home form at the weekend, with five wins, one draw and as many losses this season.

There are no new injury concerns for Town’s head coach, with a full-strength side at his disposal. Paul Coutts becomes available for selection again after sitting out the last match through suspension.

MK Dons sit in 19th place in the League One table - just one point off relegation - and have won one of their last five games in all competitions.

Paul Tisdale's side haven't hit their stride in the league so far this season and have not scored a goal in their last four outings, but they will be looking to turn that around when they travel to Highbury to face the Cod Army.

The Dons expect to be without frontmen Joe Mason (hamstring), Rhys Healey (thigh) and Sam Nombe (knee) for this weekend’s clash. 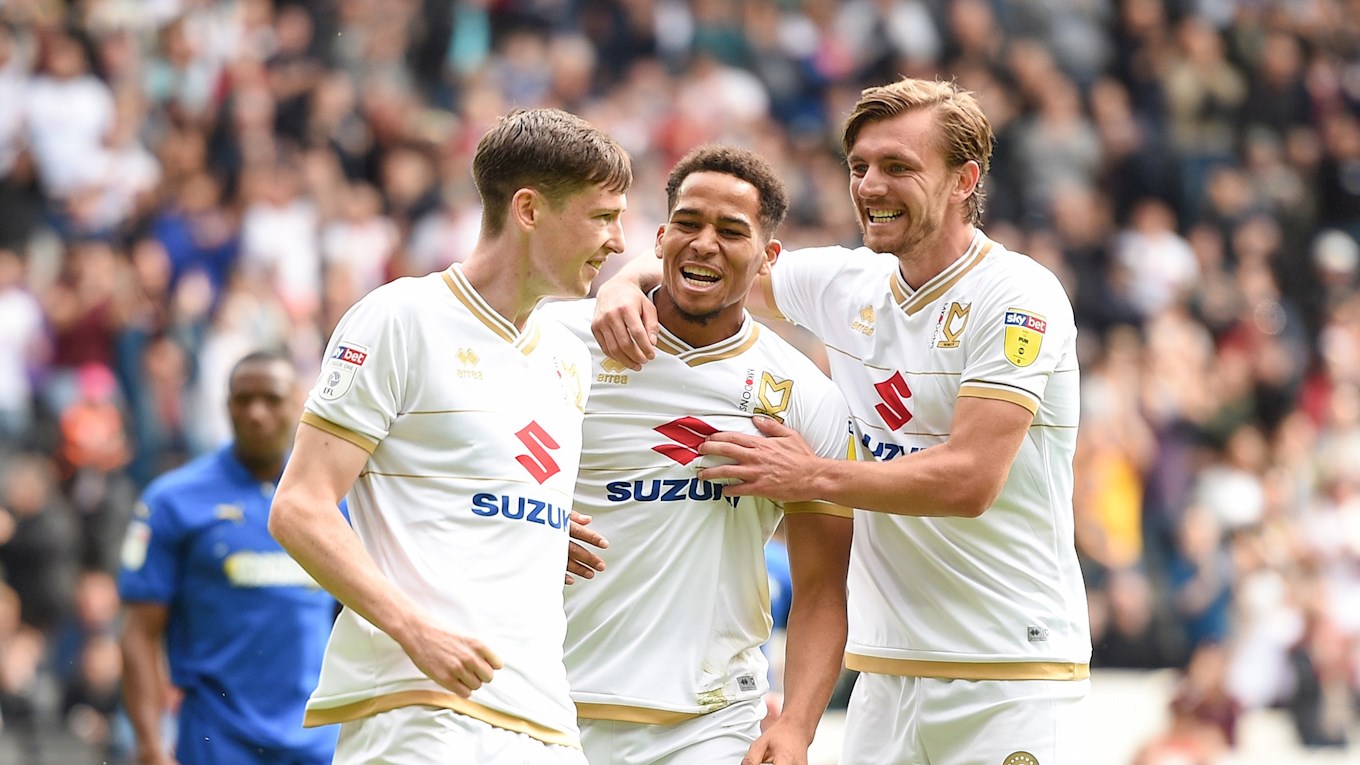 ONE TO WATCH: DAVID KASUMU

David Kasumu joined MK Dons’ academy at a young age; and went on to progress through the age groups before joining the club’s development squad. After impressing at club level, he earned himself a call-up to the Nigerian U15s national team.

The midfielder then went on to win the Dons’ Academy Player of the Year 2017/18, and the youngster registered his first goal for the club against rivals AFC Wimbledon in a 2-2 EFL Cup first-round tie.

“This league is relentless, and on Saturday we have an opportunity to put it right. As I have said, we are frustrated in many aspects as we’ve come away empty-handed, and that is not what champion teams do.

“I went to watch MK Dons against Rochdale and they will play 3-5-2 and it’s one I am looking forward to. We will have plenty of opportunities to cause them problems, and we will need to be on the front foot with the fans behind us.” 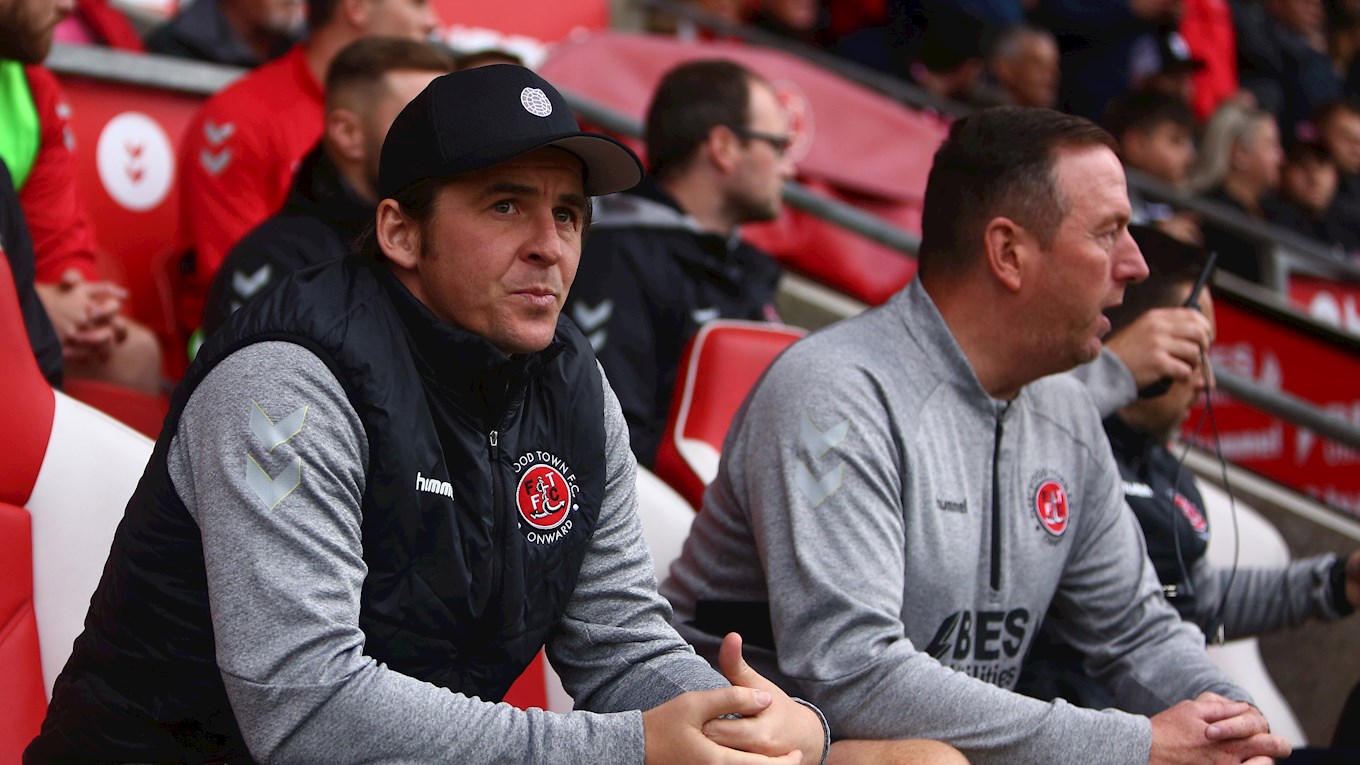 Tickets for the game are still available, and there are multiple ways for you to get yours ahead of the match.

You can head over to our online ticket page, head down to the club shop at Highbury, or get down to Poolfoot Farm to purchase yours without any hassle.

Fleetwood to win and both teams to score has been boosted on Sky Bet to 11/4 from 9/4. 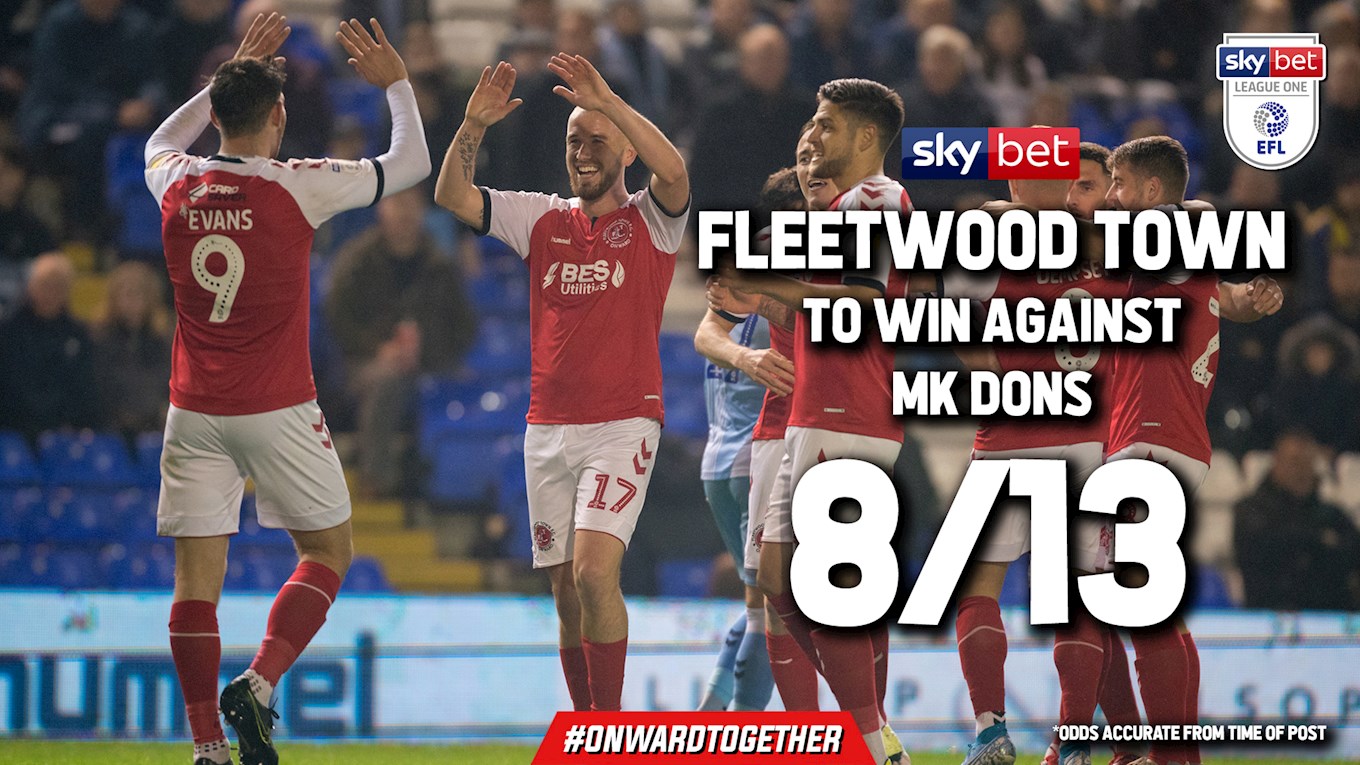 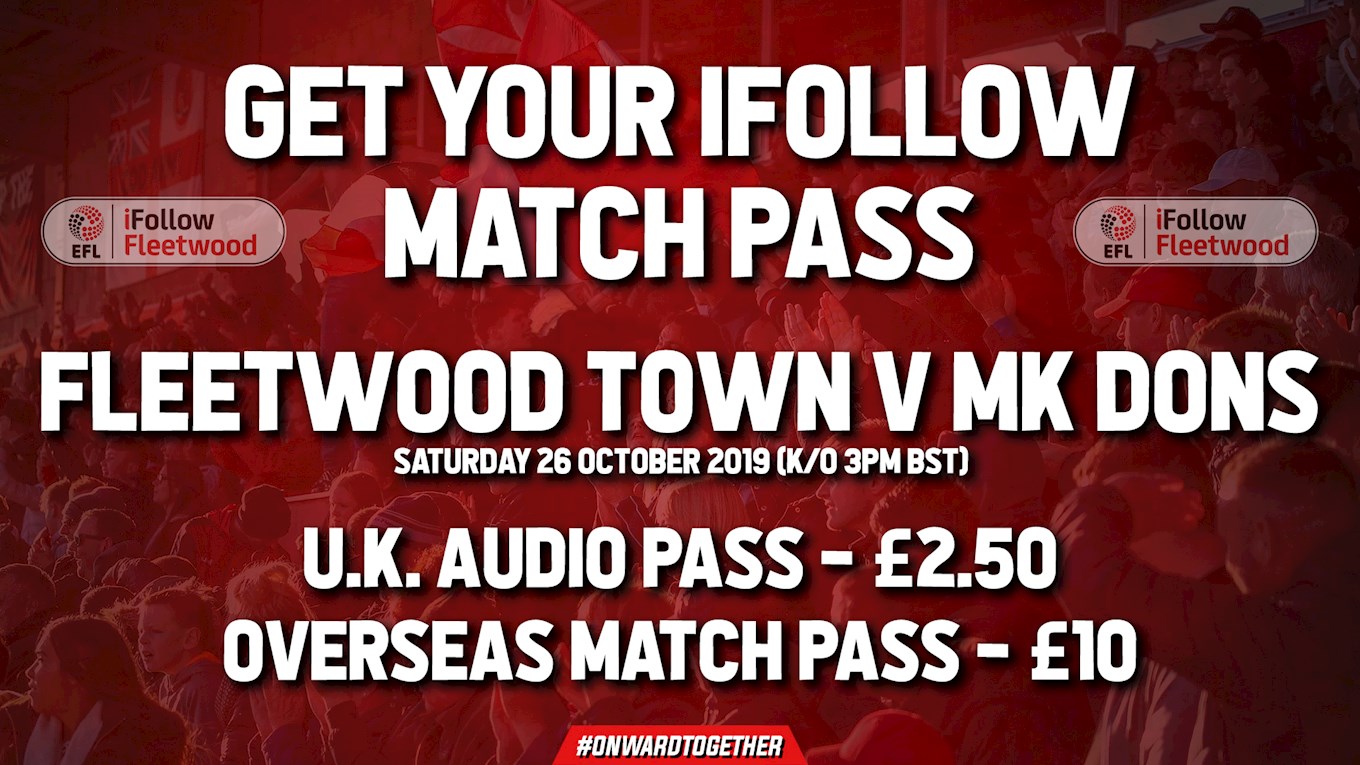 Fleetwood Town left it late to pick up all three points against MK Dons as Ched Evans put away his fourth of the campaign in a 1-0 win at Highbury Stadium.

The late goal from super-sub Evans separated the two sides, in what was a deserved victory after a hugely dominating performance by the Cod Army.

Town’s biggest chance of the first half came from a Lewie Coyle cross which was converted by forward, Josh Morris. The 29-year-old thought he had scored, however it ruled out for a foul by Paddy Madden on visiting keeper, Lee Nicholls.

The contest between the two sides was heavily dominated by the hosts, but credit to the visitors' defence who defended with resilience.

Early in the match, Wes Burns found himself with space to shoot, but his ambitious effort didn’t trouble Nicholls between the sticks.

Town were caught for the first time in the match midway through the first half, which allowed Callum Brittian to float in a cross into the danger area, which was headed narrowly over by Hiram Boateng.

The home side quickly responded with another chance of their own. Kyle Dempsey - who picked up the man of the match award - did well to create space to have a shot, but his effort fell to Burns - who was caught offside by the assistant referee.

Five minutes before half-time, Coyle whipped in a cross from the right flank. This time it fell to Morris, who put the ball in the net, before the referee disallowed his effort for a foul on the goalkeeper.

Moments later, the referee had another decision to make as he waved away two penalty claims in quick succession.

The first for a handball by George Williams, and the other for Harry Souttar being barged to the ground from a Dempsey cross. Unfortunately for the hosts, none were given as the man in the middle blew his whistle after an eventful first 45 minutes.

The second half started brightly for Joey Barton’s side, and when Burns ran at the Dons back four, his low cross into the box missed every one inside the penalty area.

Immediately after, Danny Andrew whipped the ball back in from the opposite side, with the Welshman Burns not able to get a clean contact on the ball. Another chance gone missing for the Cod Army.

Nicholls was called into action just before the hour mark, Madden forced him to tip around the post after a cross from Coyle.

Midway through the second half, there was a rare attack for the away side. Conor McGrandles – who was brought on by Paul Tisdale, had a shot which was blocked, and soon after ushered away by Town’s defence.

As the match approached the final 15 minutes, Town picked up the tempo even more, and when Paul Coutts had the ball inside the Don’s half of the pitch, he sent a looping ball towards Evans, which as crucially headed away by Joe Walsh on the goal-line.

Finally in the 85th minute, the resilience from the Dons' defence was broken, as Town took the lead!

Evans calmly put the ball into the back of the goal. Nicholls’ error had put the ball on a plate for the striker – and with probably one of the easiest goal he will score this season, Evans prodded home his 4th of the campaign.

After limiting the visitors to just four attempt, Barton can be happy with the outcome as his side now head into next weekend’s match away at Lancashire rivals, Bolton Wanderers with three points under the belt.