Fleetwood Town welcome Wycombe Wanderers to Highbury Stadium on Friday 3 July for the first leg play-off semi-final match, and in our match preview, we have all you need to know ahead of kick-off.

Mr. Harrington is the referee for the match at Highbury, and he is no stranger to the Fylde Coast as his last match at Fleetwood was back in February 2019. The Cod Army beat Charlton Athletic 1-0, with Ched Evans scoring the only goal of the game.

The man in the middle has officiated in 31 games this season. He has shown 82 yellow cards and 4 red card in all competitions this campaign. His last match was Barnsley’s 2-0 home win over Blackburn on Tuesday 30 June. 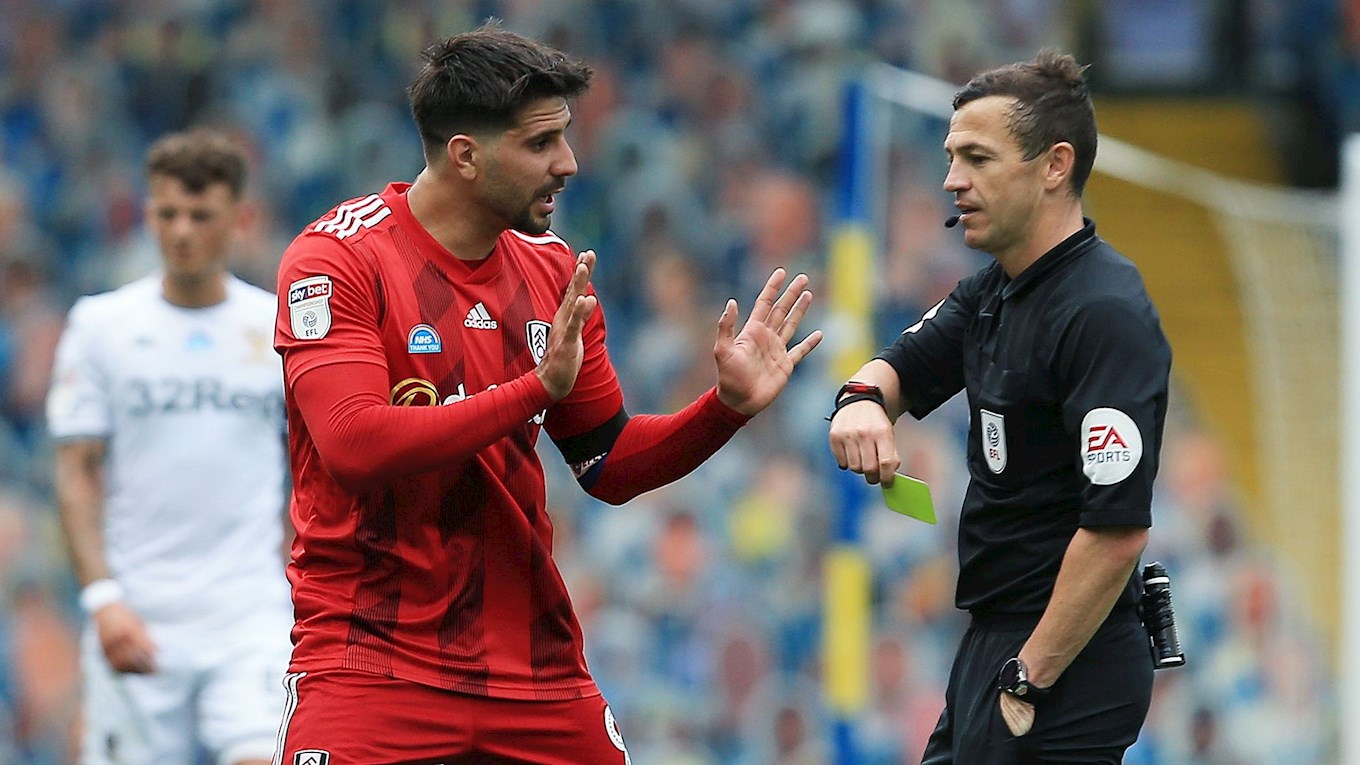 The Cod Army grabbed themselves a play-off place after both League One and Two voted in favour of ending the season with immediate effect, and determining the final standing via a points-per-game formula.

Town only lost one game in their last 18 league matches, and won six out of their last nine matches, with draws away at Sunderland and Portsmouth, and wins against Peterborough, Pompey and on the road at Ipswich.

Joey Barton mentioned in his pre-match interview that the players came back from their break in better shape than he thought they’d be, and has sinced praised the lads for all their hard efforts during the pandemic. 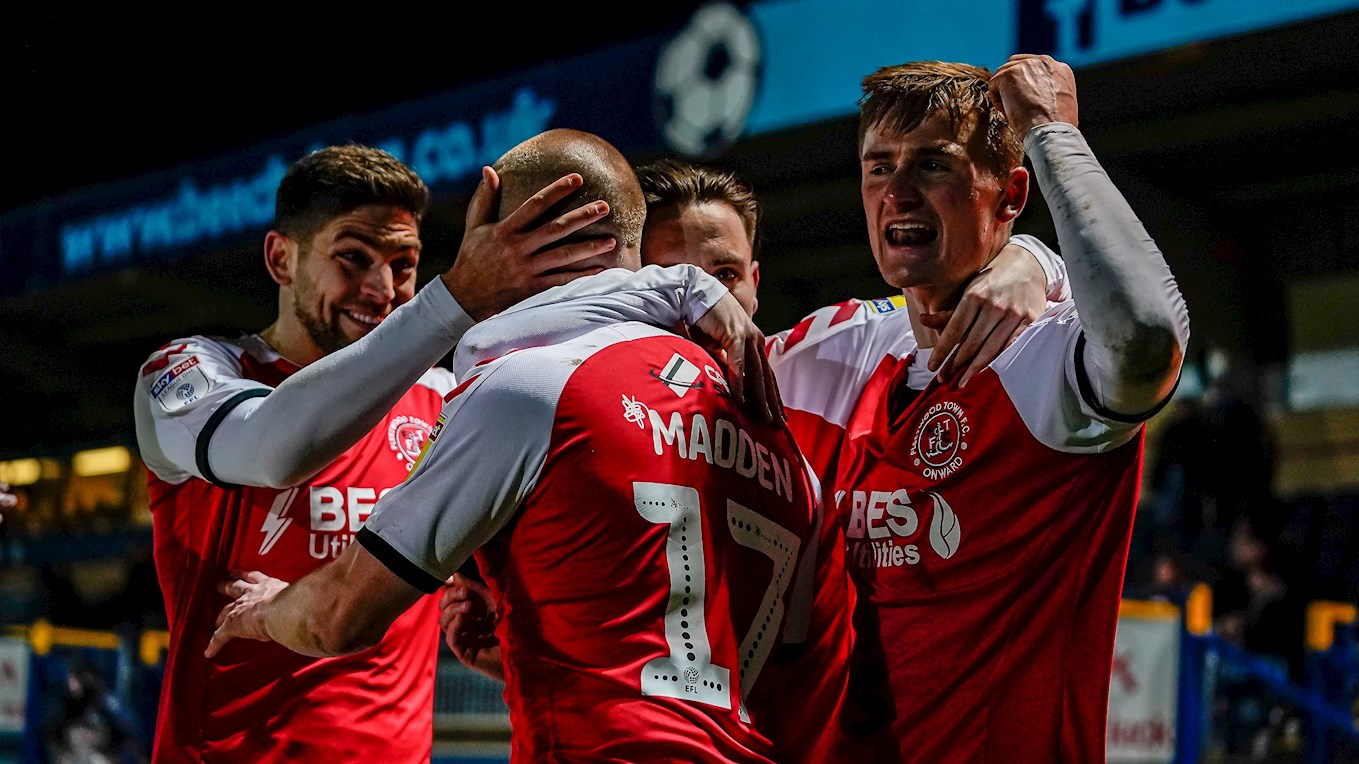 Wycombe finished 3rd in the Sky Bet League One table after the points-per-game formula was agreed, despite being in 8th place when the lockdown was introduced in the United Kingdom.

The Chairboys’ last match was a 3-1 away defeat at Doncaster Rovers. The One to Watch Adebayo Akinfenwa scored the only goal for the visitors to the Keepmoat Stadium, with Niall Ennis, Kieran Sadlier scoring for Donny, with Jason McCarthy bagging an own goal.

Gareth Ainsworth’s men won their two previous games with wins against now relegated Bolton Wanderers and Tranmere Rovers. They will come into this fixture with high hopes of reaching a play-off final. 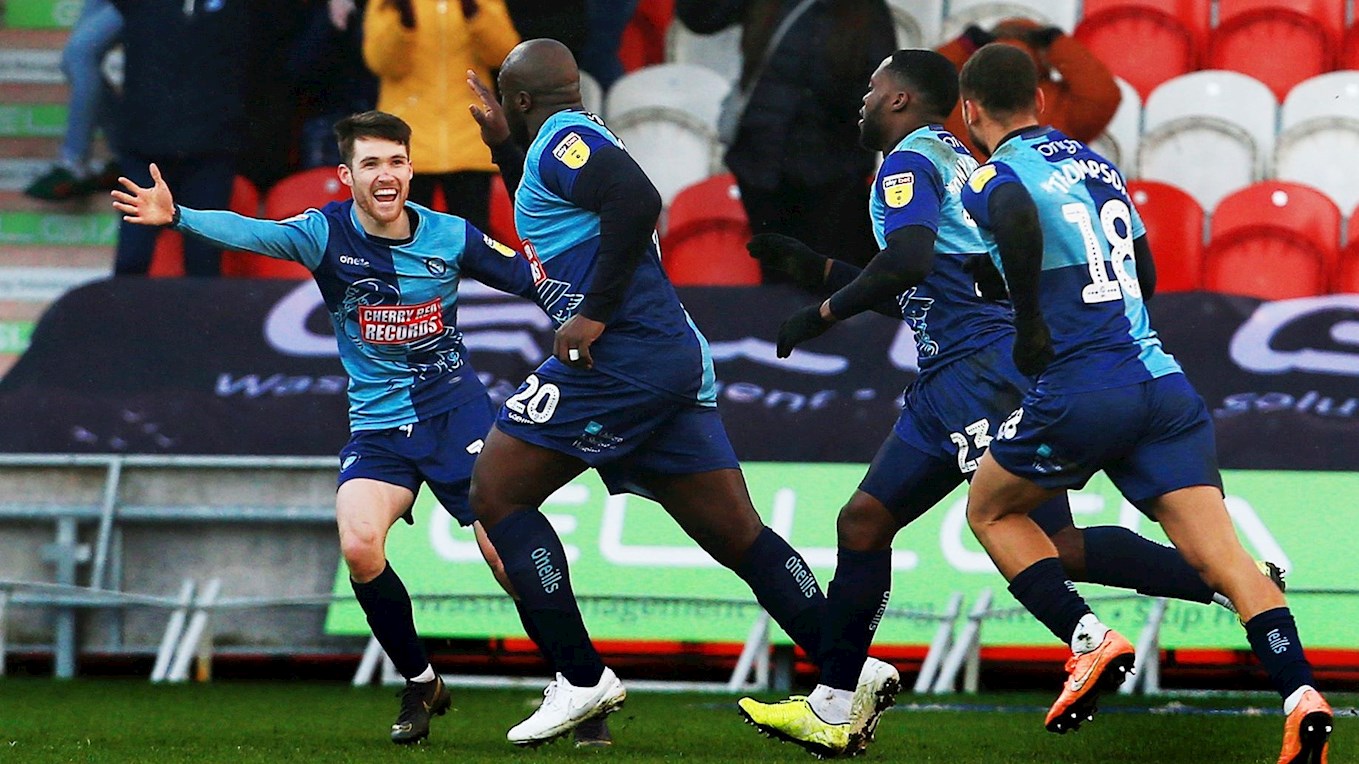 One for Town fans to keep an eye out for on Friday night is forward, Adebayo Akinfenwa.

At AFC Wimbledon, the striker scored 118 goals across four years. Then in the summer of 2016, he moved on a free transfer to Wycombe and has gone on to score 46 league goals in 132 appearances. 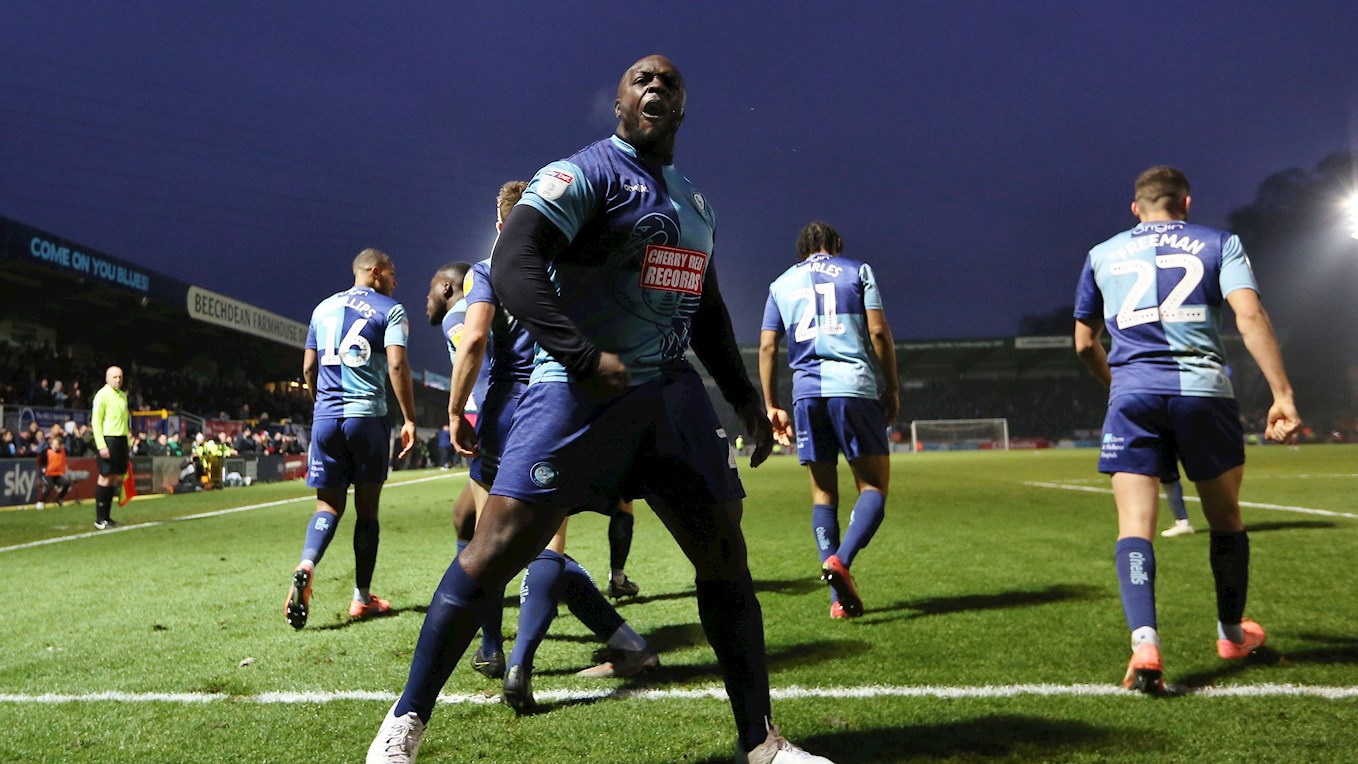 Fleetwood Town’s Irishman knows where the net is against Wycombe, scoring in both encounters in the regular league campaign. Madden bagged the winner away at Adams’ Park back in February 2020 in Town’s 1-0 win, with Barrie McKay getting the assist.

Paddy has featured 99 for Fleetwood in the EFL, scoring 49 goals in the process in all competitions. He scored his first hat-trick in English football earlier in the season in his sides 4-1 home win over Burton Albion. Relive the goals HERE – link.

His career started off in Ireland at Bohemians, before he made the short trip across the Irish Sea to join Carlisle United in January 2011. After two years at the club, which included a loan spell at Yeovil, he joined the Glovers on a permanent deal, which was a move that proved a huge success. He scored the first goal in the play-off final at Wembley, resulting in promotion to the Championship after a 2-1 win.

Scunthorpe was Madden’s next club, and he went on to score 60 goals in four years at the club, before making the move to the Fylde Coast in January 2018. 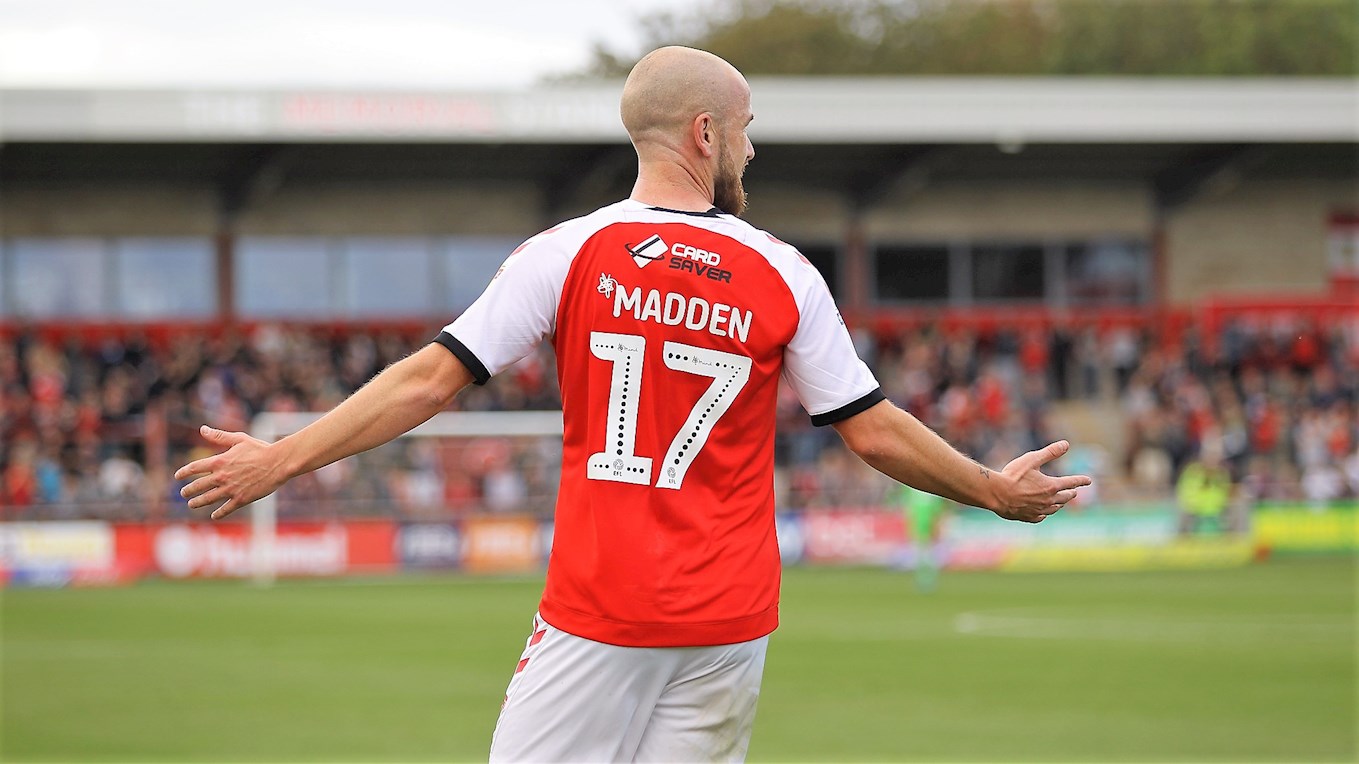 Last time the two sides met was back in February 2020. Paddy Madden scored the only goal in the goal, with Fleetwood having a number of chances against a side who had only lost one at home prior to the match against the Cod Army.

Click HERE to hear what Joey had to say on the fixture. 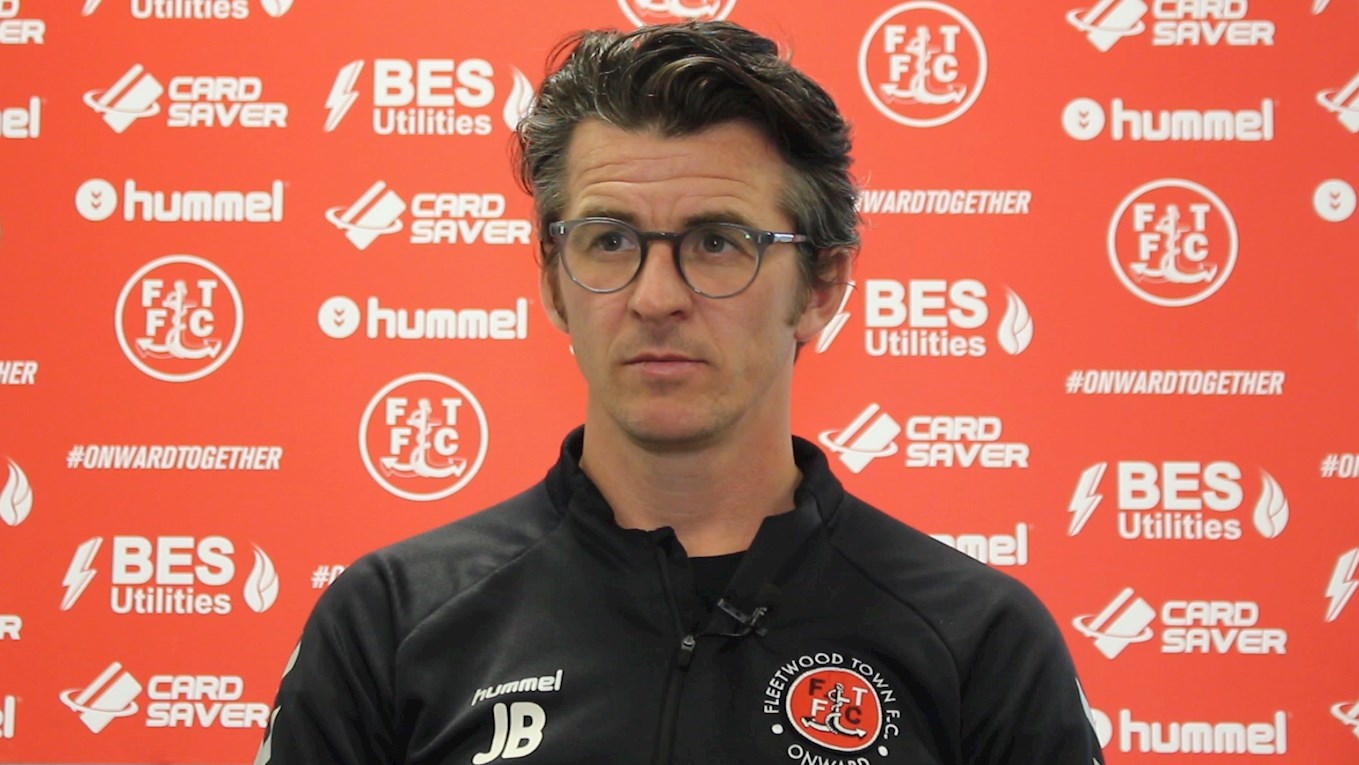 Fleetwood are 21/20 to win the first play-off semi-final against Wycombe, whilst the visitors are 5/2 to take a lead and the advantage into the second leg at Adams’ Park. A draw between the two sides is currently at 11/5 odds.

One of Sky Bets’ price boosts odds for this fixture is Paddy Madden to score and Fleetwood to win in 90 minutes – 3/1.

You can get odds of 14/1 for Australian international Harry Souttar to score a header.

Joey Barton’s side beat Wycombe 1-0 in their latest encounter, and for the same score line this time round, the odds are currently 11/2.

A night to forget for Fleetwood Town after suffering a 4-1 defeat to Wycombe Wanderers in the first leg of the Sky Bet League One play-off semi-finals at Highbury.

Three goals in the first six minutes was only the start of the game, with Ched Evans’ equaliser being cancelled out by an Alex Cairns own goal, after Nnamdi Ofoborh’s opener. To make matters worse Lewie Coyle saw red later on in the first half, before David Wheeler made it 3-1 right before the break.

Fleetwood began the second half the brighter of the two teams, but Wycombe extended their lead when Alex Samuel hit a loose ball into an open goal. In the 85th minute, Fleetwood saw their second red card of the game, when Paddy Madden received two yellow cards in quick succession.

It was an extremely eventful start at Highbury Stadium, with the Cod Army suffering an early goal, inside the first two minutes.

Ofoborh received the ball just outside the box and met it with a first-time strike that found the back of the net after Matt Bloomfield picked him out from the right-wing.

Just two minutes later, Fleetwood Town won a penalty after Lewis Gibson was brought down in the box by Ryan Allsop, following a Barrie Mckay free-kick. Evans was the man to stand over the penalty kick, and hit it home – sending the keeper the wrong way and levelling the scores – his 11th goal this season.

The visitors made it 2-1 when Joe Jacobson swung in a corner which seemed to have been taken by the wind and ended up bouncing off of Cairns and into the net.

The dramatic start to the game continued to carry on, when Lewie Coyle saw red in the 32nd minute for a strong tackle on Jacobson, after it seemed he won the ball. The fifth red card the referee, Tony Harrington, has shown this campaign.

Jacobson stood over the penalty and hit it hard and low to the right but Cairns denied him with a brilliant save, before another emphatic stop to deny the rebound from Wheeler.

Five minutes of added time were shown and Wycombe were able to extend their lead, scoring their third of the game in the 48th minute through Wheeler.

Fleetwood Town came out the blocks, at half-time, with Kyle Dempsey being the only change, coming on for Callum Connolly – meaning a change in shape for the Cods.

Despite trailing by two goals, Fleetwood continued to play the ball around confidently, and it wasn’t long before Wes Burns found space to burst into, but his delivery into the box wasn’t met by anybody.

In the 57th minute, the Chairboys extended their lead. Cairns came to collect the ball in the air through a crowd of players but didn’t manage to claim it. The ball fumbled its way to Samuel who slotted it into the open goal.

Cairns did well to stop the visitors from going further ahead after Fred Onyedinma met Samuel’s through ball before hitting it goalwards. A great stop.

There was a huge shout for a Fleetwood penalty after Madden was brought down in the box, but the referee deemed him to have dived and booked him for simulation. However, the Irish striker then saw a second yellow card for dissent soon after.

A night to forget for Fleetwood Town, but there’s still another leg to go, anything can happen.