Fleetwood Town travel to Kingsmeadow on Saturday 8 February for their Sky Bet League One fixture against AFC Wimbledon, and in our match preview we have all you need to know ahead of kick-off. 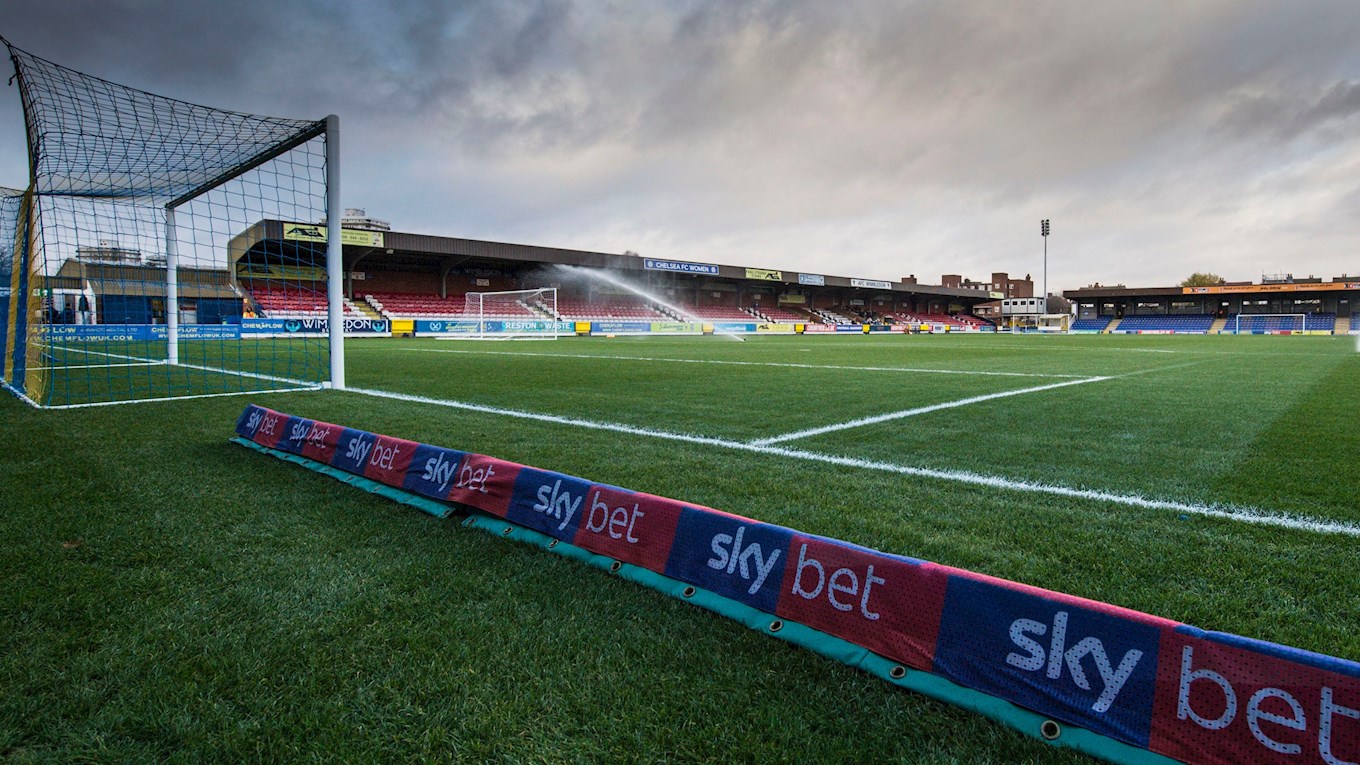 Saturday’s match between Wimbledon and Fleetwood will be Mr. Rock’s first time officiating the two sides, with the referee predominately taking charge of non-league matches over the last couple of years.

The referee has took charge of 21 fixtures this season, where he has handed out 73 yellow cards and four red cards. He produced 7 yellow cards in his last match, which saw Cheltenham Town beat Morecambe 2-1 at home. 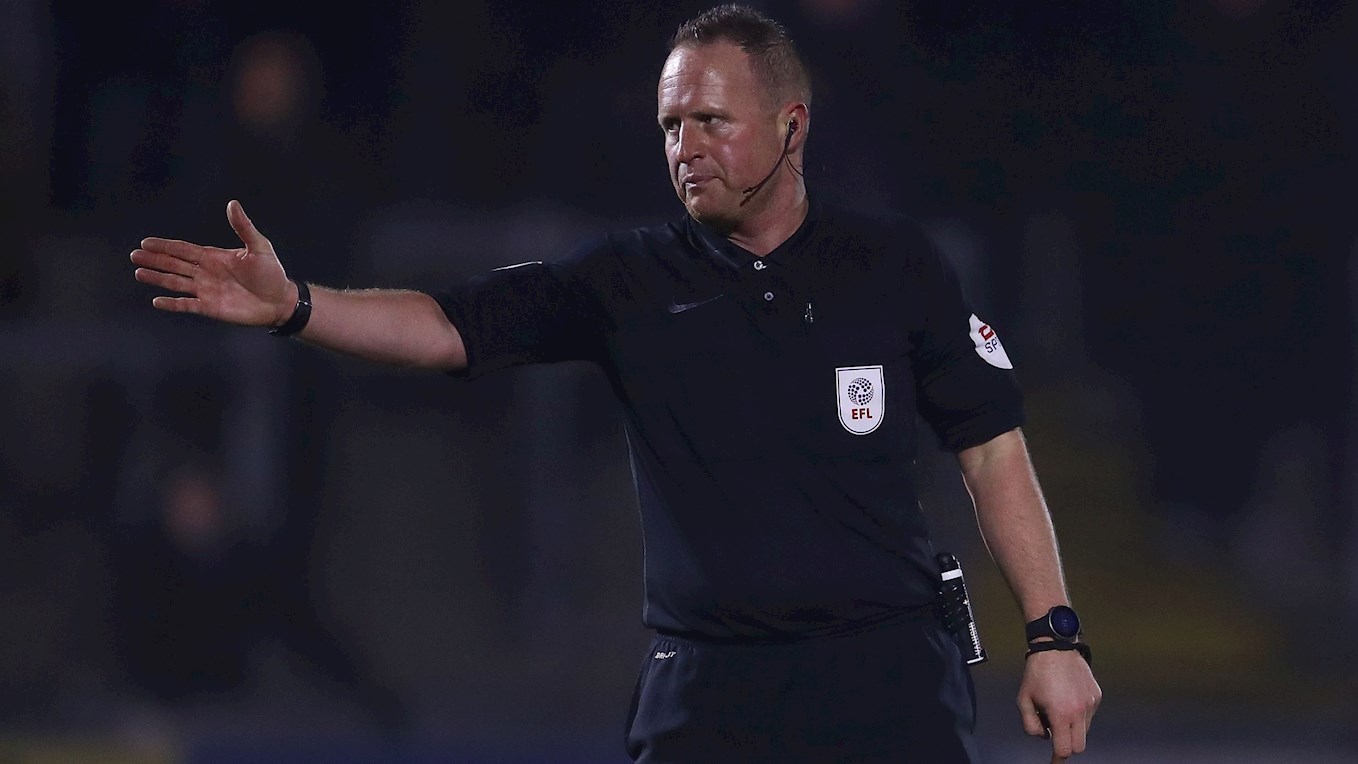 The Cod Army travel to AFC Wimbledon on the back of their 2-1 victory over play-off hopefuls Doncaster Rovers. Ched Evans gave Town the lead in the 35th minute, with Harry Souttar doubling the home sides advantage five minutes after the restart. Niall Ennis scored for Rovers moments later, but it wasn’t enough to push them for an equaliser.

Deadline Day signings, Barrie McKay and Isak Thorvaldsson are available for selection this weekend after missing the match against Doncaster due to late registration last Friday. The two have trained with the team this week, and both are hoping to play a part this weekend.

Harrison Biggins, Kyle Dempsey and Jordan Rossiter will all miss out at AFC Wimbledon with injuries. 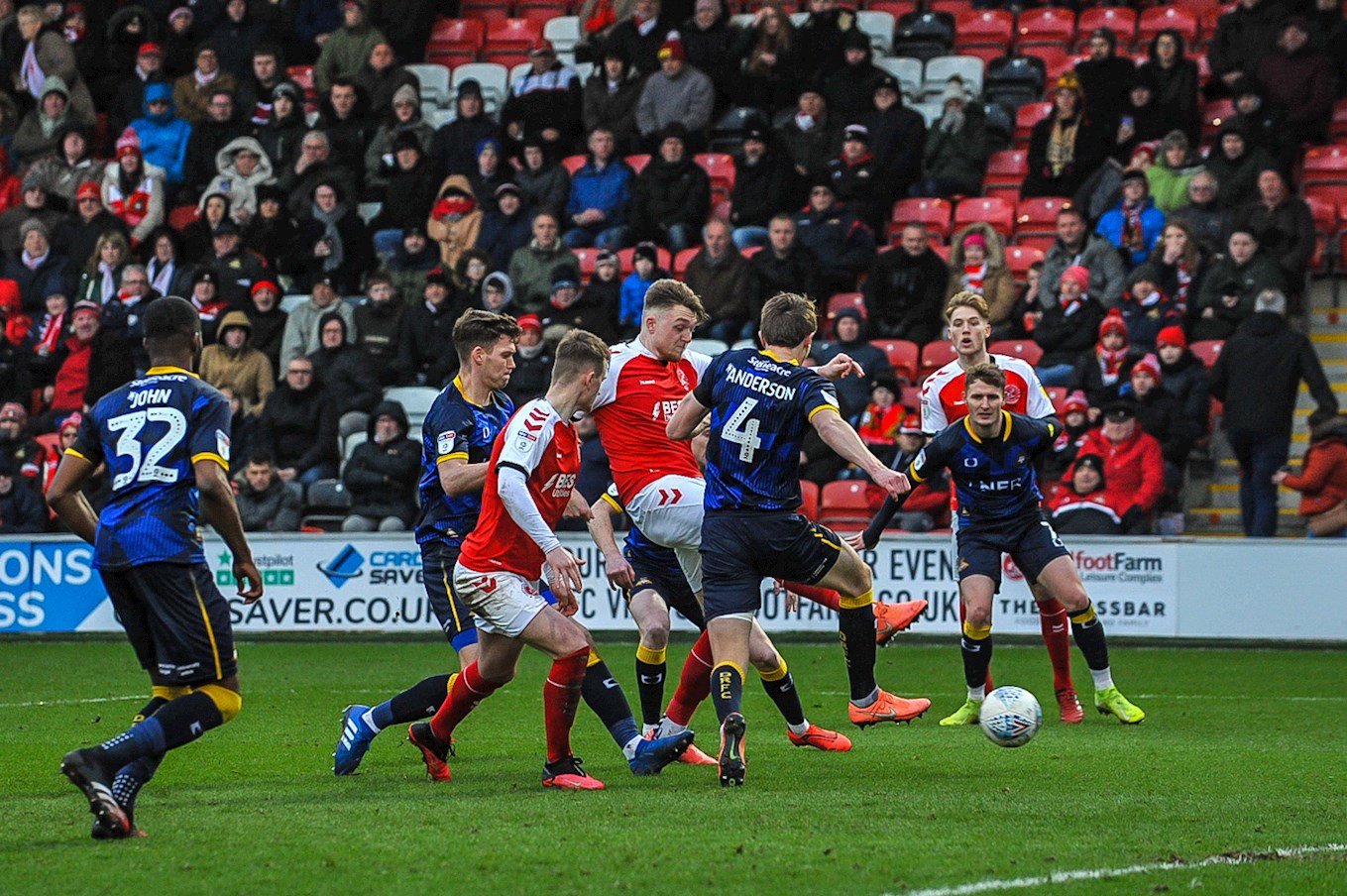 The hosts are back on home soil following their 2-1 defeat away at Accrington Stanley last weekend. Jordan Clark and Dion Charles scored early goes at the Wham Stadium, with Joe Pigott scoring 15 minutes from time to give the Wimbles hope, but it wasn’t to be for the side from South West London.

Wimbledon secured the signings of Julien Lamy from Rotherham United and Mads Bech Sorensen from Brentford on permanent deals in January, but with no players leaving the club, the manager has a healthy squad to choose from this weekend. 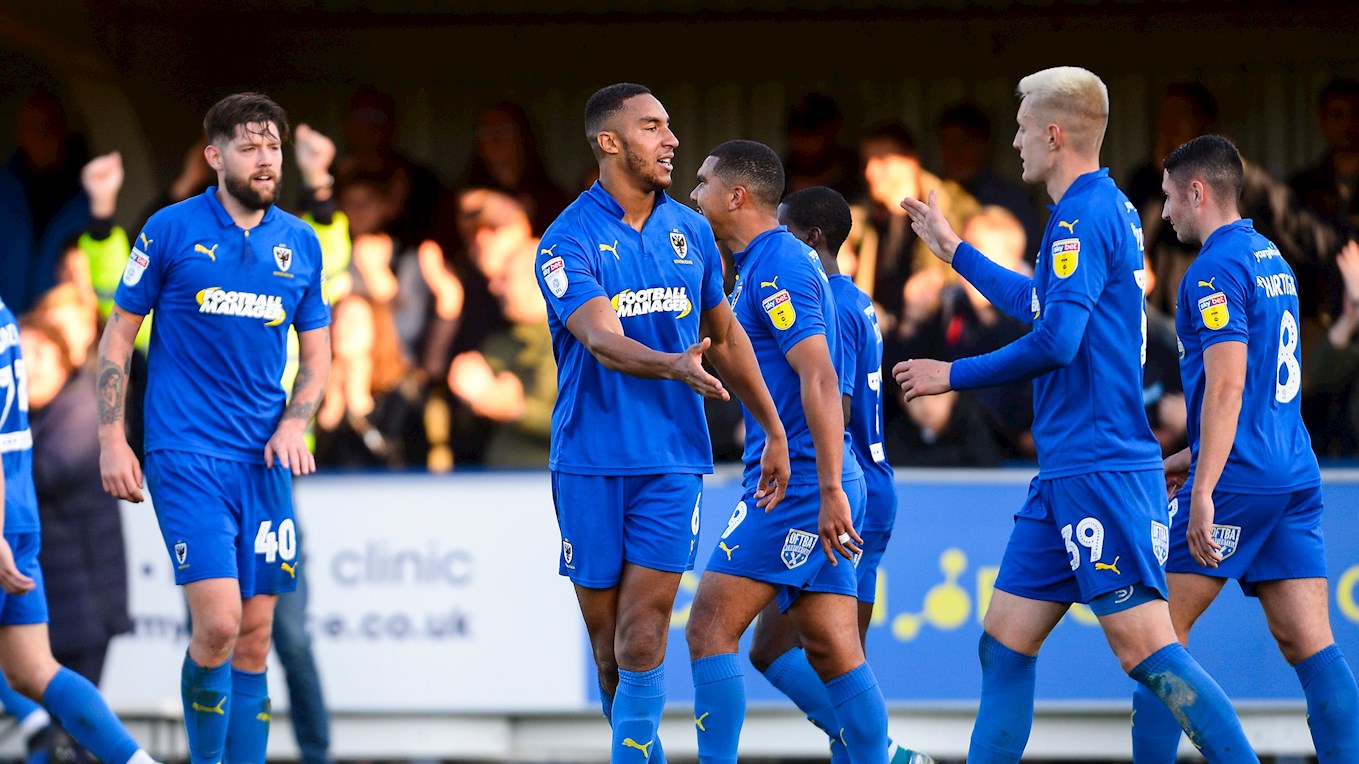 One for Town fans to keep an eye out for on Saturday afternoon forward, Joe Pigott. He has scored 8 goals this season in 32 appearances, with his latest goal coming in Saturday’s 2-1 defeat away at Accrington Stanley.

The 26-year-old began his career at Charlton Athletic in 2012, where he spent four years at the club. First team football was tough to come by for Pigott, so loan spells at Gillingham, Newport and Southend followed. 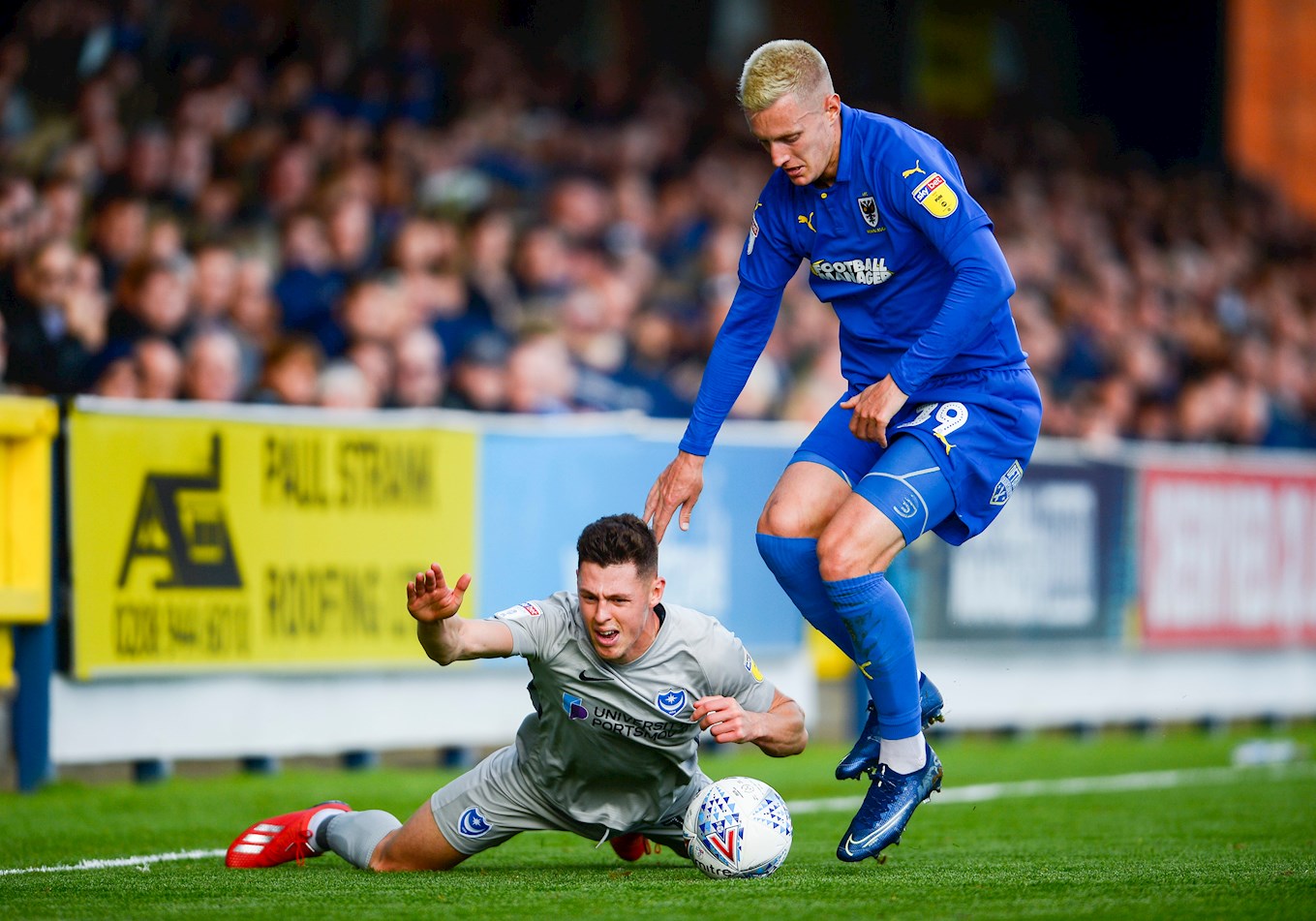 If you can’t make Saturday’s match against AFC Wimbledon, don’t worry as we have it covered with iFollow – meaning you can live stream or just listen to full match commentary in the comfort of your own home. 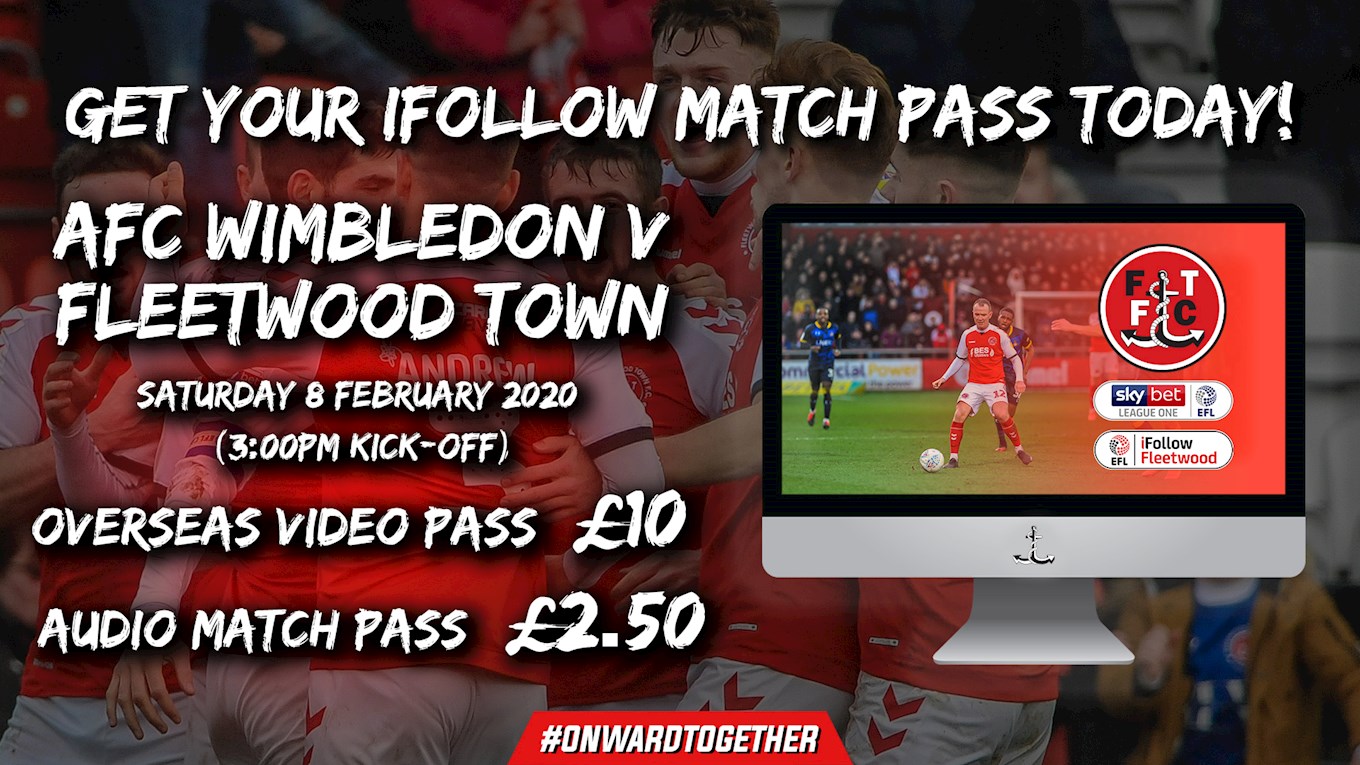 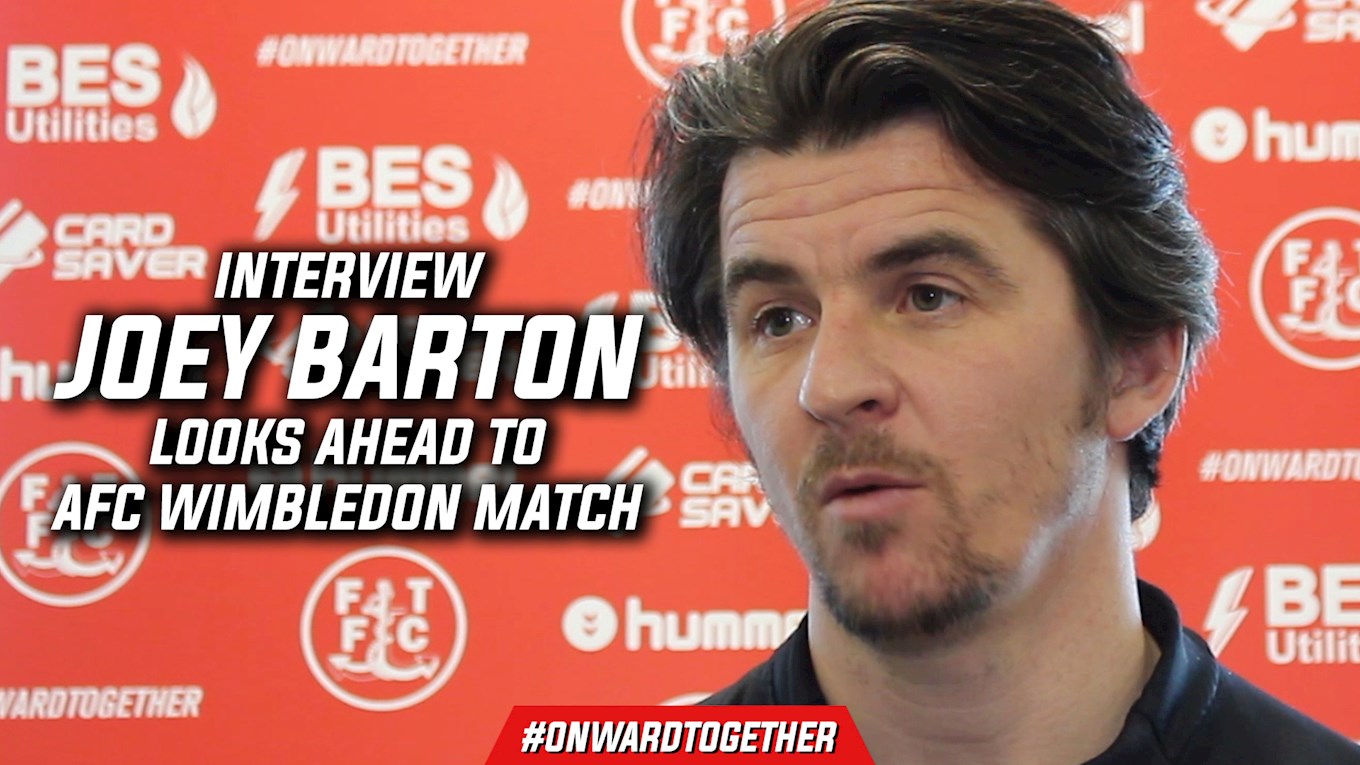 WHAT BARRIE McKAY HAD TO SAY

Watch Barrie McKay’s first interview for the club on iFollow as he talks about how the move came about and what he feels he can offer the current squad in the next few months. 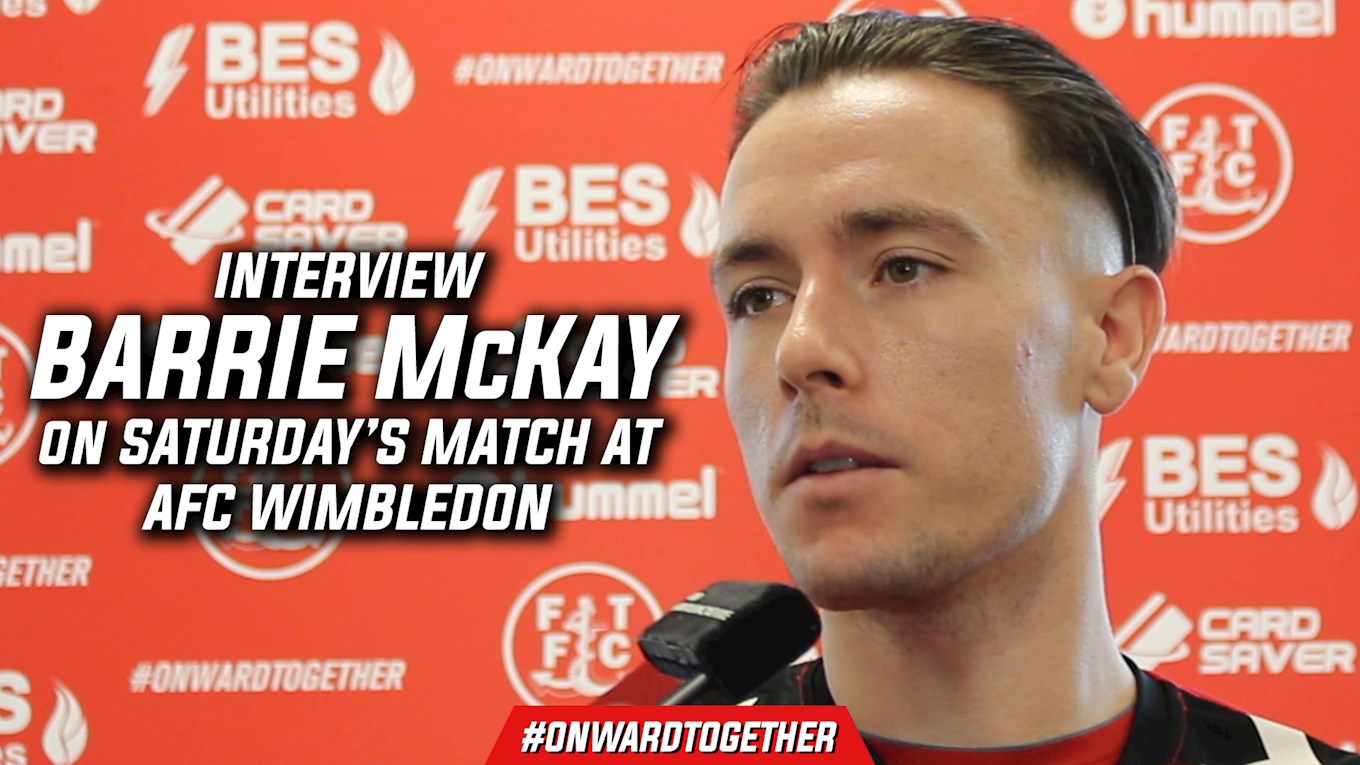 To book tickets for this fixture, please contact the ticket office on 01253 775080. Tickets can also be purchased via www.ftfcstore.com or at Poolfoot Farm. 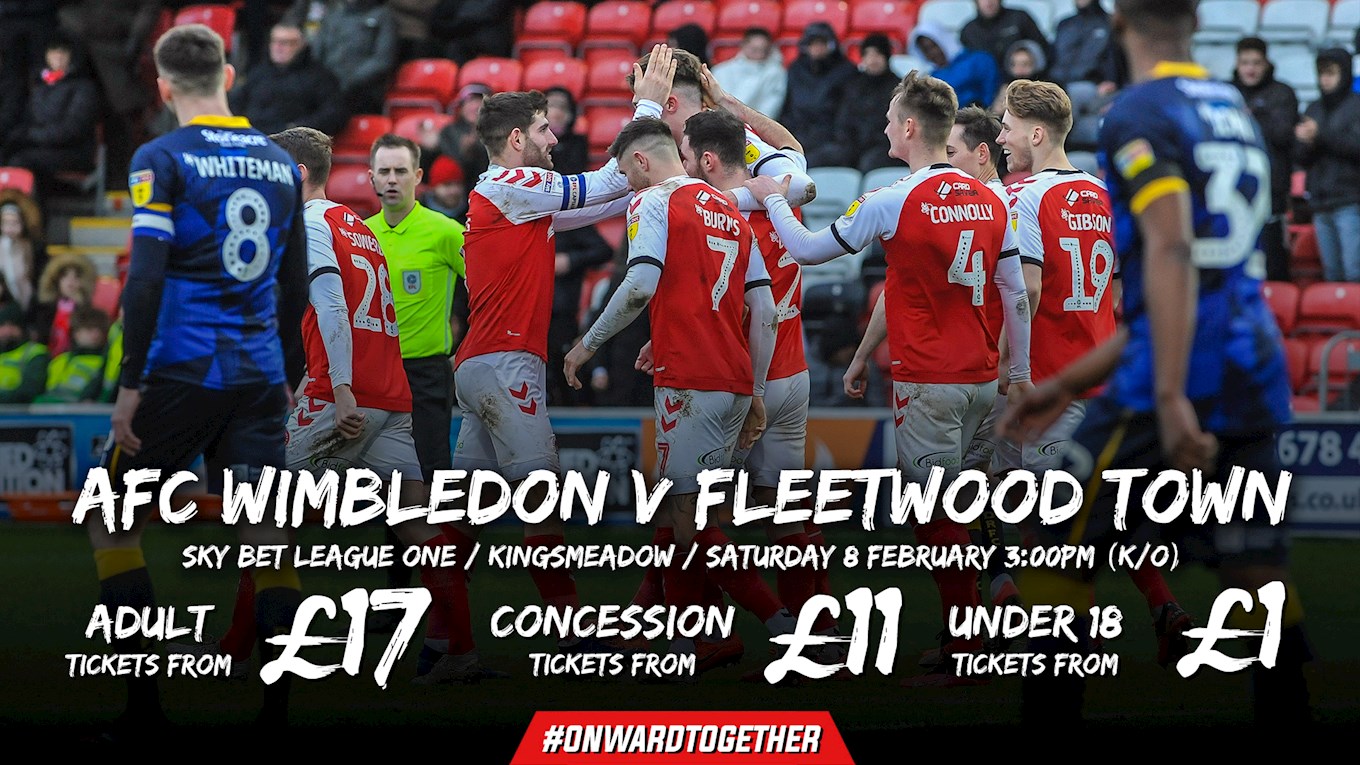 Fleetwood are 21/20 to pick up all three points away at Wimbledon.​ A draw between the two sides is priced at 12/5, with the hosts 12/5 to win at Kingsmeadow.

Joey Barton’s side beat Wimbledon 3-0 in the same fixture last season, and for a repeat of that score line, you can get odds of 18/1.

After holding on for the opening 15 minutes, Ched Evans gave Fleetwood the lead in the match from close range, however the hosts equalised before the end of the first half through Shane McLoughlin – who headed home from inside the six-yard box.

In what was a nervy second half, two substitutes linked up in new signing Barrie McKay and Paddy Madden, where the Irishman tapped the ball home for his first goal of 2020.

On a sunny afternoon in South West London, it was the hosts who started off the brighter of the two teams. Paul Osew capitalised on a mistake in the Town defense, but the midfielder couldn’t direct his shot on target to open the scoring.

Moments later, McLoughlin picked up the ball 20-yards out from goal after nice build-up play from the Wombles, but once again the shot was way off target and Alex Cairns was able to take some time to give his side a breather.

15 minutes into the game, there was a clash of heads between Mads Sorensen and Harry Souttar. The Australian international carried on, but Sorensen had to head down the tunnel to get stitched up – he was later replaced by fellow defender, Rod McDonald.

It was a tough opening period minutes for Joey Barton’s side, but when they did get the ball down on the ball down, they caused Wimbledon a few problems. Glenn Whelan did very well to pick out Lewie Coyle down the right, but his cross was cleared away from Terell Thomas.

And through taking pressure from the hosts, Town got the first goal of the game through Evans – who scored his tenth league goal of the season, but it was scrappy to say the least.

After the Welshman’s first effort was saved on the line, he followed up like any good striker and put away his second chance.

Fleetwood grew into the game, but there were a few chances falling for Wimbledon as the visitors attacked. Joe Pigott had a glorious opportunity to level proceedings, but his looping header went high over the crossbar and out for a goal kick.

Mitch Pinnock and Pigott linked up well throughout the match for Wimbledon, and when the lay off found Pinnock, he pulled the trigger but also Coyle’s right leg after he blocked the shot.

And the lead was levelled ten minutes before the break after McLoughlin headed home from cross on the left side. You have to say it is a goal the home side deserved.

Lewis Gibson thought he had opened his account at Fleetwood five minutes before the interval. Callum Connollly did superbly well to pick out the Everton loanee, but his volley spun in the air and over Joe Day’s crossbar.

Town had two great opportunities just before the break. Danny Andrew struck one from range which made Day pull off a smart save. Then Wes Burns twisted inside the box after Josh Morris found him, but his shot on the turn ended up with the fans behind the goal.

In the early exchanges of second half, Town enjoyed time with the ball and against Coyle had time and space to deliver a cross into the box. He looked for Evans, but Thomas was there to head the ball away from danger.

McKay entered the fray just before the hour mark and replaced Josh Morris on the left wing. The man on loan from Swansea City slotted behind Evans, with Andrew occupying the left flank.

On the hour mark, Pigott picked the ball up inside Town’s penalty area and opened up his body to curl it around the defender and the keeper. His execution was there, but Souttar read the attackers mind and managed to head the ball away for a corner.

Paddy Madden was introduced into the game and replaced Connolly. Fleetwood had four attacking players on the pitch in the search for that winning goal at Kingsmeadow.

Coyle left the pitch in pain after over stretching for the ball. Let’s hope the injury isn’t as bad as first feared.

With ten minutes to go, Madden scored Fleetwood’s second of the match. The Irishman got on the end of McKay’s cross after he did well to beat his man. Madden’s first effort was initially saved, but he saw a chance to kill the game and that’s certainly what he did.

The Cod Army take all three points from South West London, making it three away wins on the bounce against The Dons. Town now look forward to Tuesday’s trip to Wycombe Wanderers.

Match tickets and coach travel are now on sale for Fleetwood Town’s trip to AFC Wimbledon.

The Cod Army make the journey to the capital on Saturday 8 February, with kick-off at Kingsmeadow at 3pm.

Joey Barton’s side won the reverse fixture 2-1 in August thanks to goals from Paddy Madden and Josh Morris.

To book tickets for this fixture, please contact the ticket office on 01253 775080 or visit the club shop between 9am and 5pm on weekdays, 9am to 1pm Saturday non matchdays or on matchdays at Highbury Stadium.