Fleetwood Town and Rotherham United played out a hard fought 2-2 draw at the ASSEAL New York Stadium on Saturday afternoon.

Ched Evans scored twice, but it wasn’t enough to secure all three points for the Cod Army, with Freddie Ladapo and Matt Crooks grabbing the goals for the Millers.

Town had the first big chance of the game thanks to Kyle Dempsey. His effort hit the post and was followed up by Evans, but Daniel Iversen did well to keep the ball out.

Fleetwood started strongly and were in complete control early on, winning six corners in the first ten minutes – however they failed to capitalise on the number of set plays they had their expense.

17 minutes into the match, Evans was brought down 20 yards out by Joe Mattock - who picked up a yellow card for the offence. Danny Andrew took the free-kick and made the 'keeper work with a slight move to his right hand side.

The Cod Army made the home side pay 26 minutes in when Evans opened the scoring. He got on to the end of Lewie Coyle’s cross, and headed home post Iverson for his sixth goal of the season.

After going 1-0 down, the hosts became more compact and began to create more opportunities as Fleetwood wanted to take the sting out of the match.

Mattock blazed a long-range effort over the bar for the hosts nearly half an hour in. Then shortly after, he had appeals for a penalty waved away by referee Peter Wright after Michael Smith tumbled to the ground in the box following the full-backs cross.

Rotherham had their first real chance of the game five minutes before the interval when Ladapo did well to create some space in the box, but his effort from 10 yards out was easily saved by Billy Crellin.

In added time, Dempsey missed a glorious opportunity inside the hosts' penalty area. The midfielder drove at the back line after pressing the back line, but the midfielder hit his effort over the Rotherham crossbar.

At half-time, Rotherham made a change with Chiedozie Ogbene replacing Trevor Clarke, and it was a change that Paul Warne would have been delighted to see pay off.

The Millers came flying out of the blocks in the second half and when Kyle Vassell’s cross found Ladapo, he fired wide. A lively start to the second half.

Just after an hour played, Rotherham made their pressure pay when Ladapo scored the equaliser. Matt Olosunde crossed the ball in from the right-hand side, finding the striker – who headed the ball across goal to see it trickle past the goal line after hitting the woodwork.

However, Town responded immediately. Evans capitalised on a mix up at the back, with the Welshman sliding the ball into the back of the net after a mishap in the Millers’ back line. Evans now sits on seven goals for the season.

Shortly after netting his second, Evans broke through on goal again! He let fly from 12 yards out, causing Iverson trouble as his effort looked to be sneaking into the top corner.

But with nine minutes of normal time left, Rotherham equalised again. Adam Thompson’s effort was saved by Crellin initially, but Crooks was there to follow in and fire home in front of the home fans.

The hosts had a chance to win the game when Ogbene got beyond the Town defence, but Carlton Morris fired his shot over the bar.

Fleetwood applied pressure late into added time, but they couldn’t find that yard of space to create a chance, meaning both teams will settle for a point before a hectic festive period for both Barton and Warne’s side.

The Cod Army now travel to Rochdale on Boxing Day, and will be looking to return to winning ways.

It's time for you to back Fleetwood Town as they travel to Rotherham United on Saturday 21 December in the last Sky Bet League One match before Christmas!

The match at The New York Stadium will be the Cod Army’s last game before Christmas as the club begins a busy festive period, with matches against Rochdale and Bristol Rovers to come before the New Year.

Joey Barton’s side drew 1-1 with Gillingham at the weekend, and they need your support as they look to push into the play-off places.

Supporters will be sat in the Meditemp South Stand with prices as follows:

The club will be running coach travel for the trip to South Yorkshire. Onward Card members will pay just £5 for travel, with non Onward Card holders being charged £15. Coaches will depart Highbury at 10:30am on the day of the game.

To book either tickets or travel, call 01253 775080, visit the club shop at Highbury Stadium or purchase them online now. 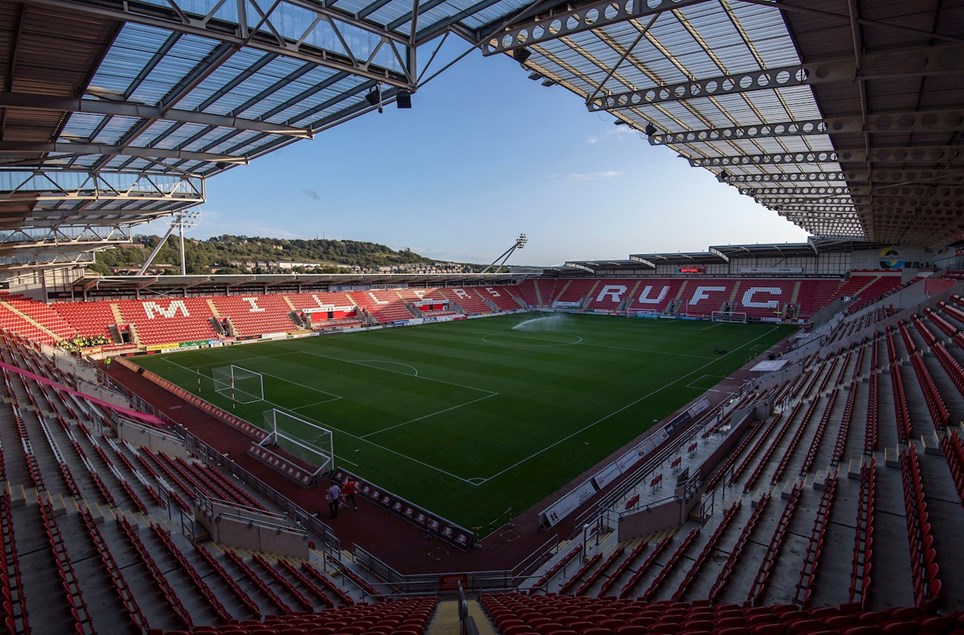 Tickets and travel on sale for trip to Rotherham United