Fleetwood Town travel to Sky Bet League Two side Crawley Town on Sunday in the Second Round of the Emirates FA Cup, and we have all you need to know in our match preview.

Mr. Donohue has taken charge of 15 games this season, with majority of those being in Sky Bet Championship. He has shown 59 yellow and four red cards, with one being in his only League One fixture, which was between MK Dons and Tranmere Rovers. 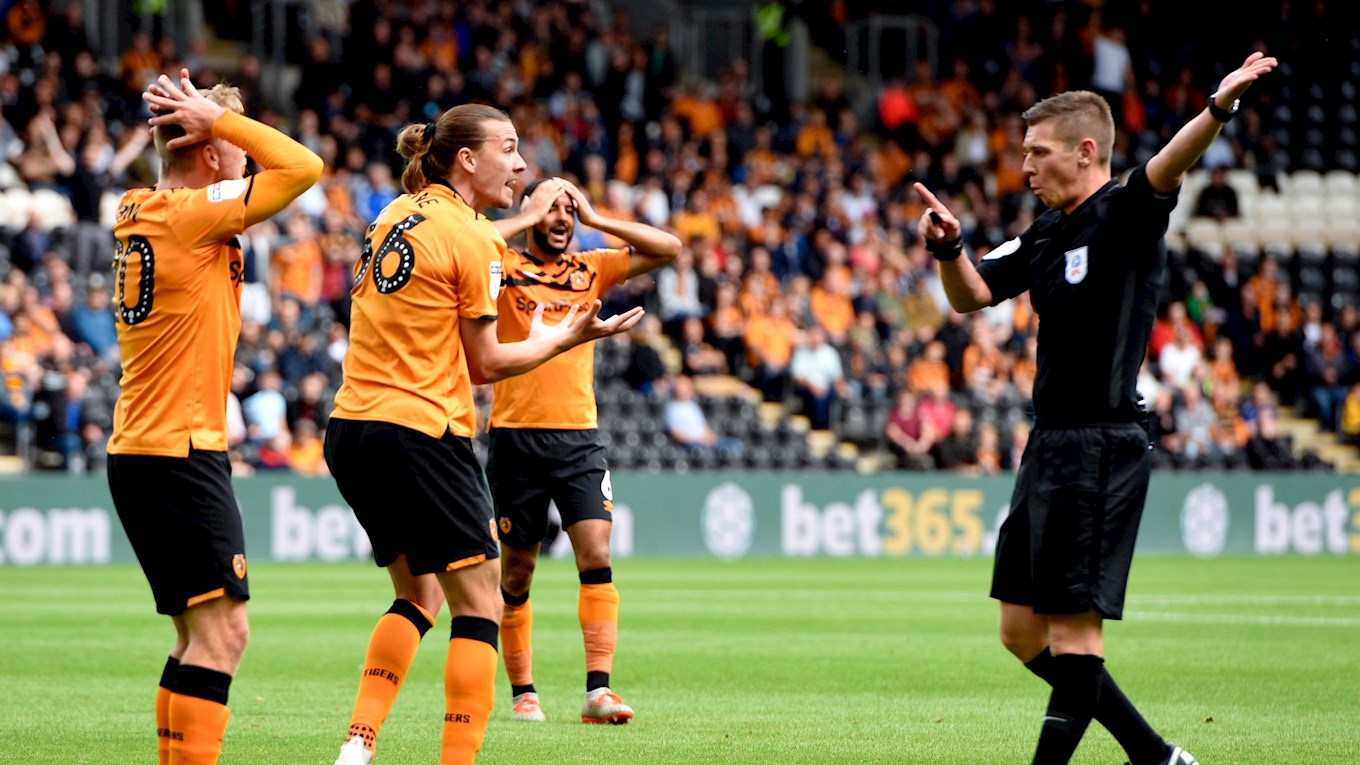 In the First Round of the Emirates FA Cup, The Reds beat fellow League Two side Scunthorpe United. Former Town forward Ashley Nadesan opened the scoring just before half-time, with Reece Grego-Cox scoring two in ten minutes, and Ashley Nathaniel-George making it four. 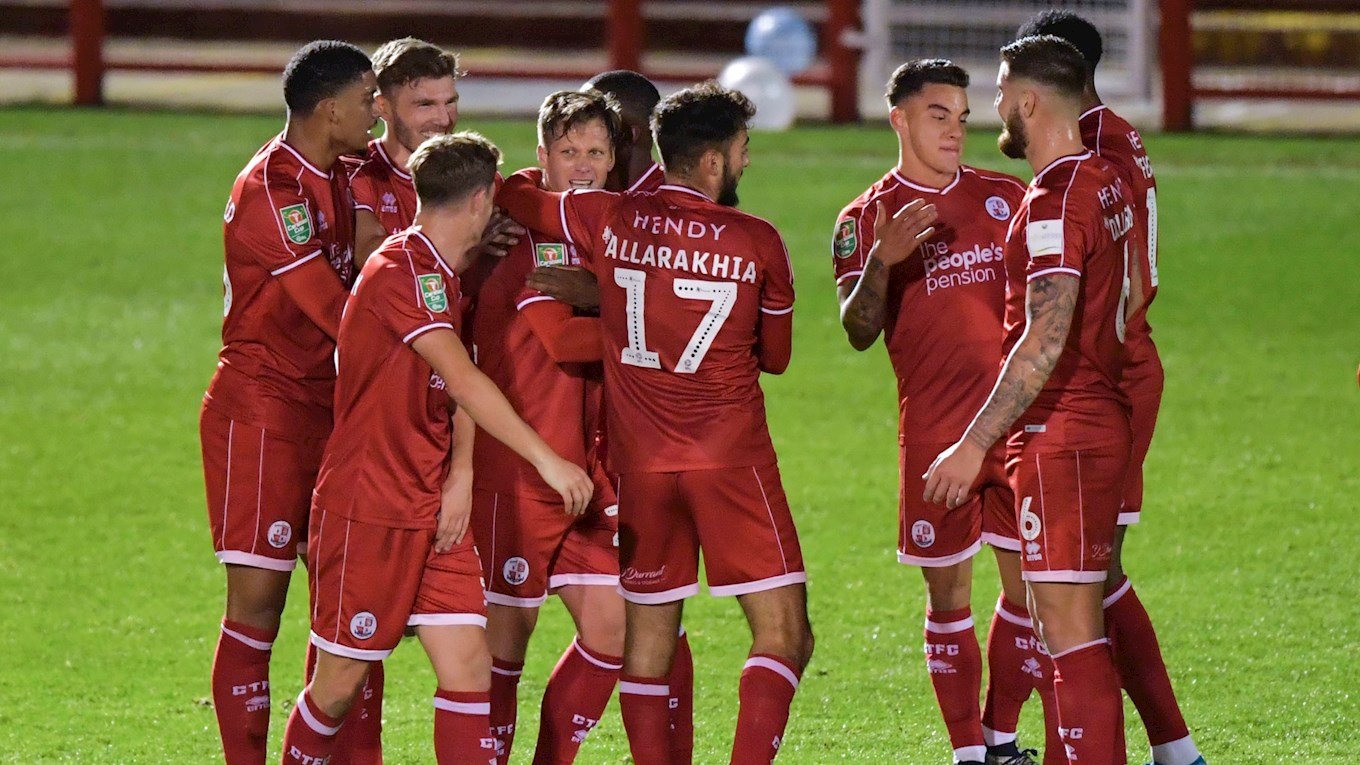 Fleetwood made it through to the Second Round of the competition after a comfortable 2-0 away win at National League side, Barnet. Ched Evans opened the scoring at The Hive Stadium, with Ash Hunter sealing the win late in the second half.

Town were in action on Tuesday night in the Leasing.com Trophy. The Toffees were their opponents at Goodison Park, with a seat in the Third Round of the competition up for grabs. With a clean sheet, and goals from Danny Andrew, Paul Coutts, Paddy Madden and Wes Burns, the Cod Army will wait to see who is up next in the competition.

Jordan Rossiter picked up an injury in Fleetwood’s 2-1 home win over Tranmere last Saturday, and news broke on Friday that the on-loan Rangers man would be out for a long period of time. Bar that injury to Rossiter, Barton has a full strength squad to choose from this Sunday. 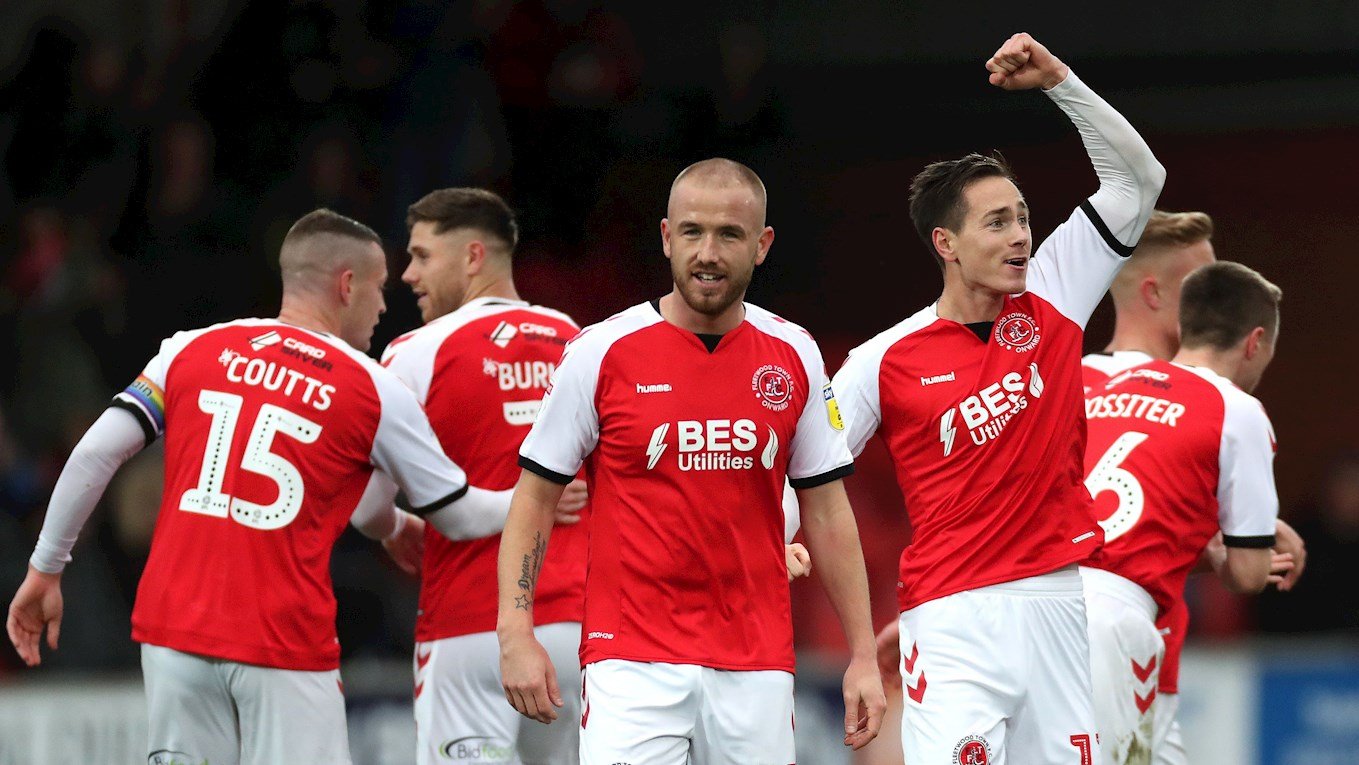 Lubala was born in Democratic Republic of the Congo, but was raised in Leicester. After impressing at grassroots level, the striker caught the eye of Birmingham City – and took up a scholarship with the club in 2014.

Whilst at St. Andrews, he signed his first professional contract in April 2016 and was a regular in the Under 23s, with the occasional call up to the first team. He made his City debut against Bristol City in April 2018.

The 21-year-old’s contract was up at Birmingham City in 2019, and made the move to Crawley in the summer to rejoin former City coach, Gabriele Cioffi. He scored in each of Crawley’s first four matches that season.

This season he has scored nine goals in 24 appearances, with his latest being in their 1-1 draw at home against Morecambe. 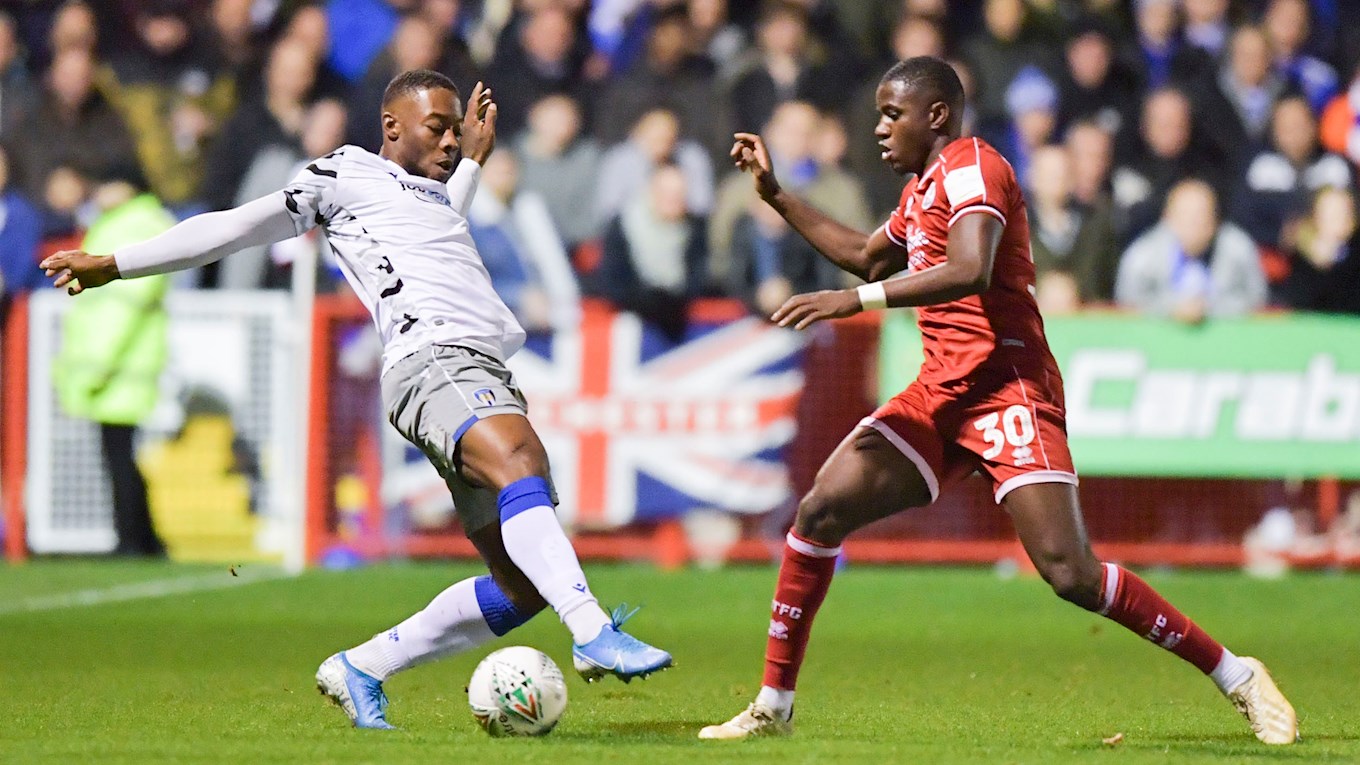 Fleetwood Town fans around the world, and in the United Kingdom, will be able to listen to full match commentary from South London for just £2.50.

Due to the Emirates FA Cup having full rights for video streaming, iFollow will not be able to sell a Video Match Pass. 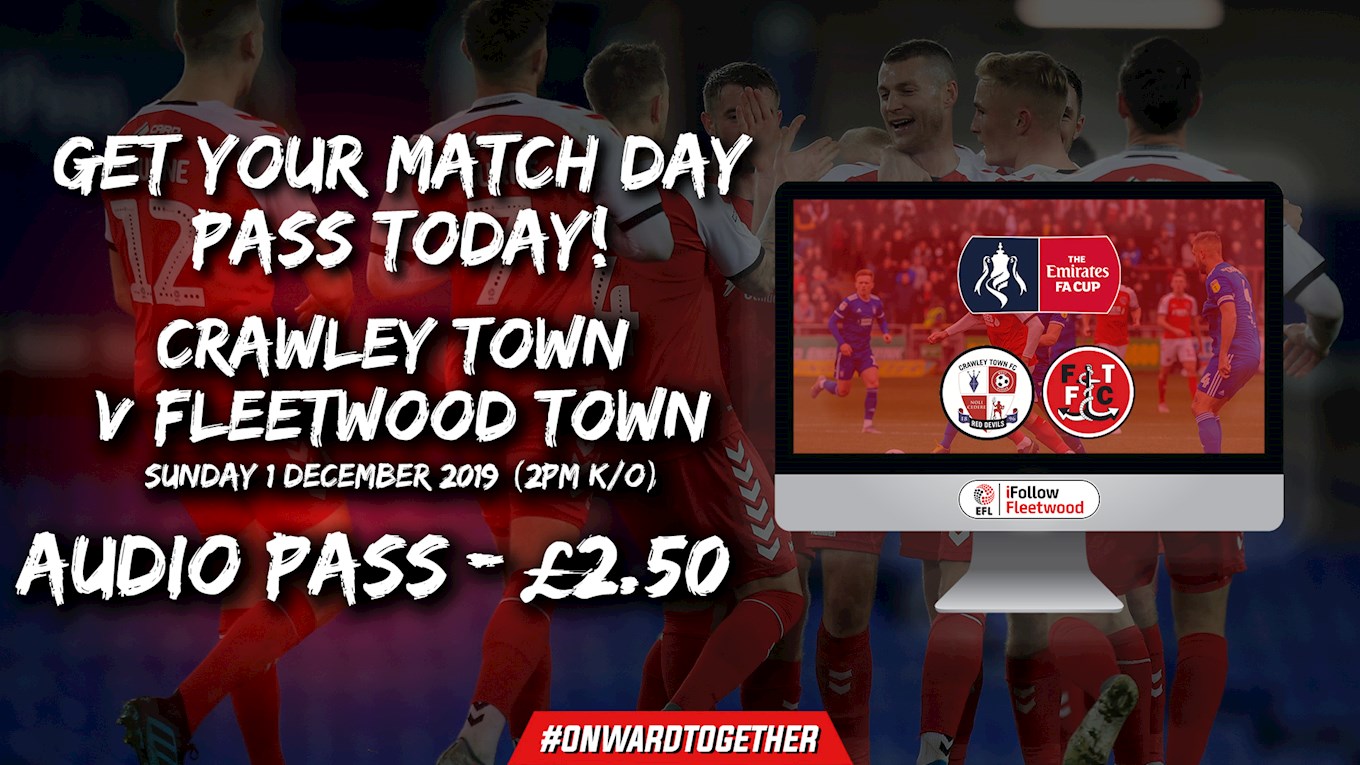 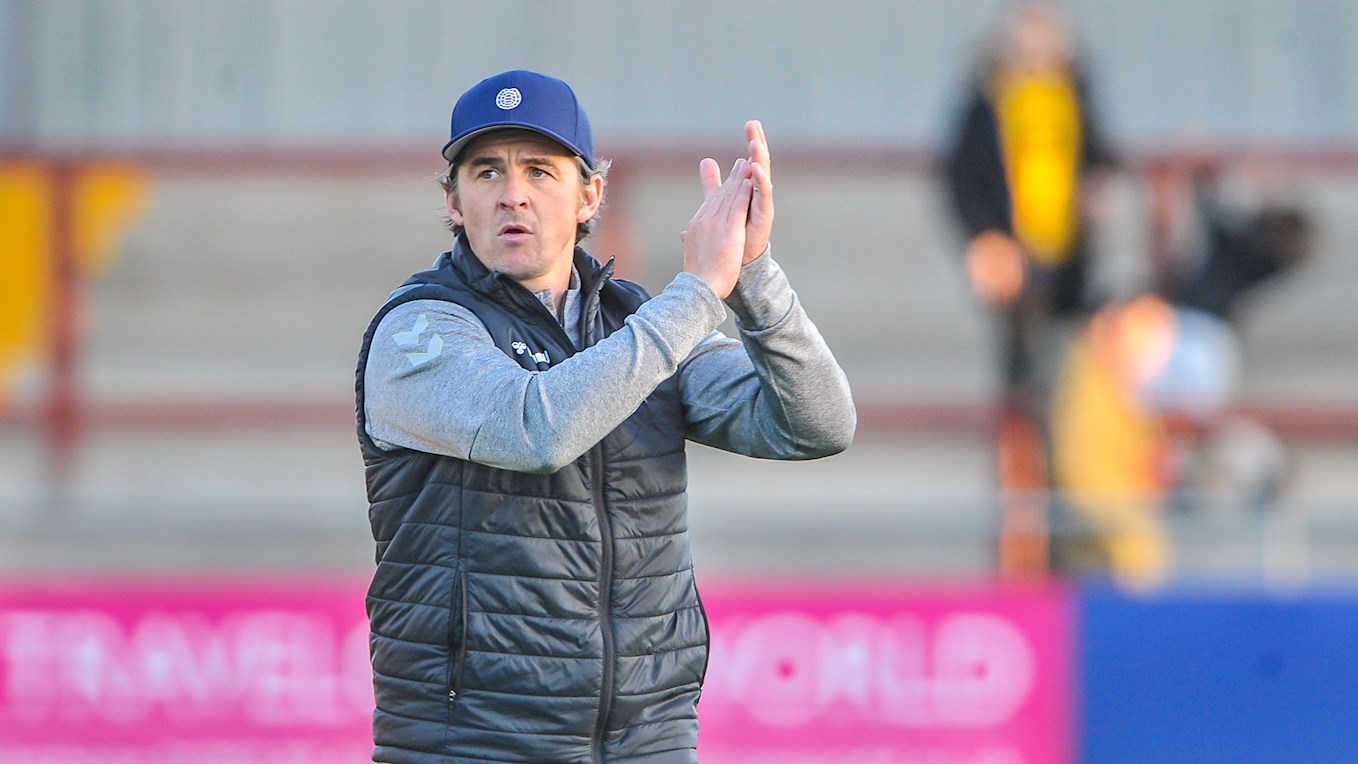 WHAT JOSH MORRIS HAD TO SAY:

Fleetwood Town forward Josh Morris was on press duty with Barton, and you can watch the full interview on iFollow HERE. 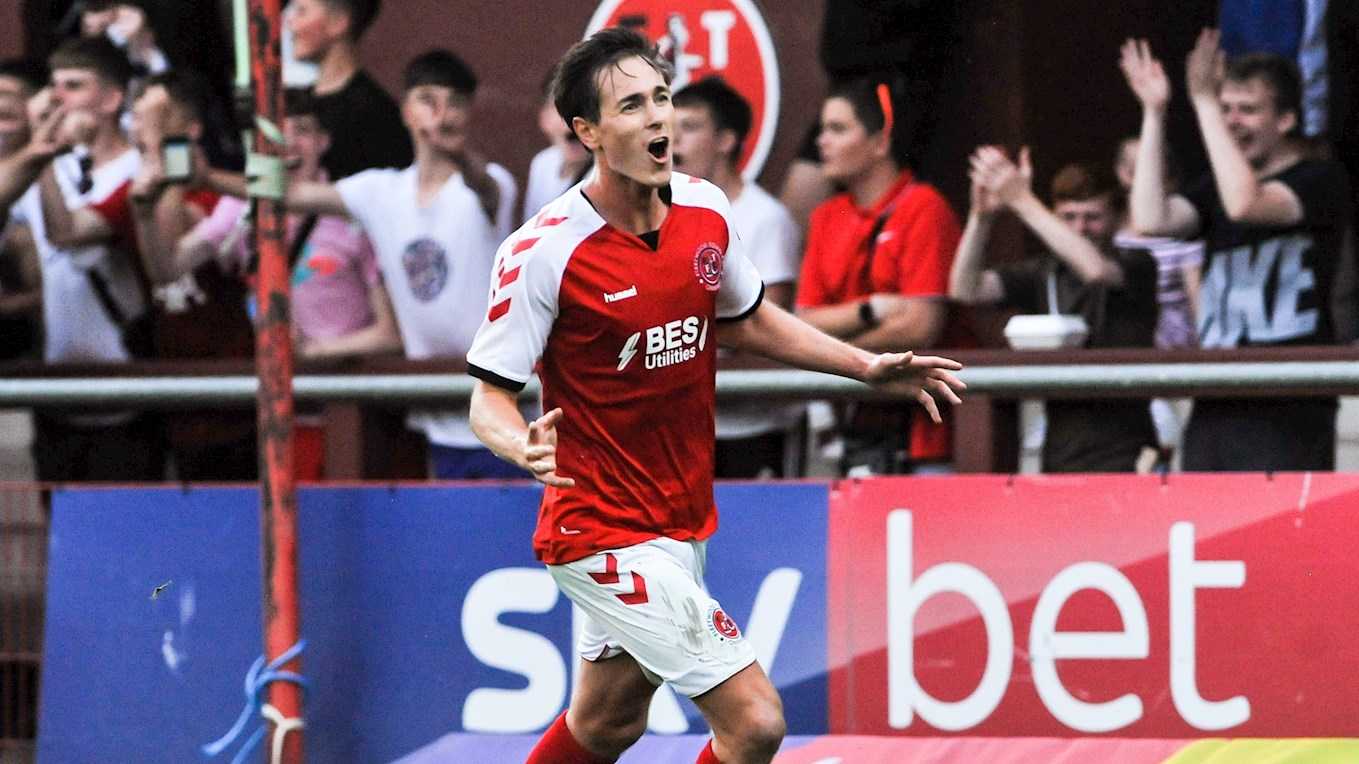 Crawley Town goalkeeper, Glenn Morris spoke to the local Crawley media ahead of the game, and he has said there is confidence around the place with a place in the Third Round at stake.

“Morris said: “At the minute, things are just not quite going for us. I don’t like saying that too much but it wasn’t our afternoon last time out.

“On another day, we could have won. What can you do? You have got to move on and look forward to the next game and take it from there.

“We are performing well and if we can take that into the game, we’ll be fine. It’s a great competition and the club has got history there so we look forward to that.

“We will have a look at what they can do but we’ll only worry about us and if we play like we know we can, we’ll cause any team trouble.

“We’ll just focus on ourselves. We’ve got a nice little break but it would have been nicer to go into that break with a win. Sometimes you can’t control that.” 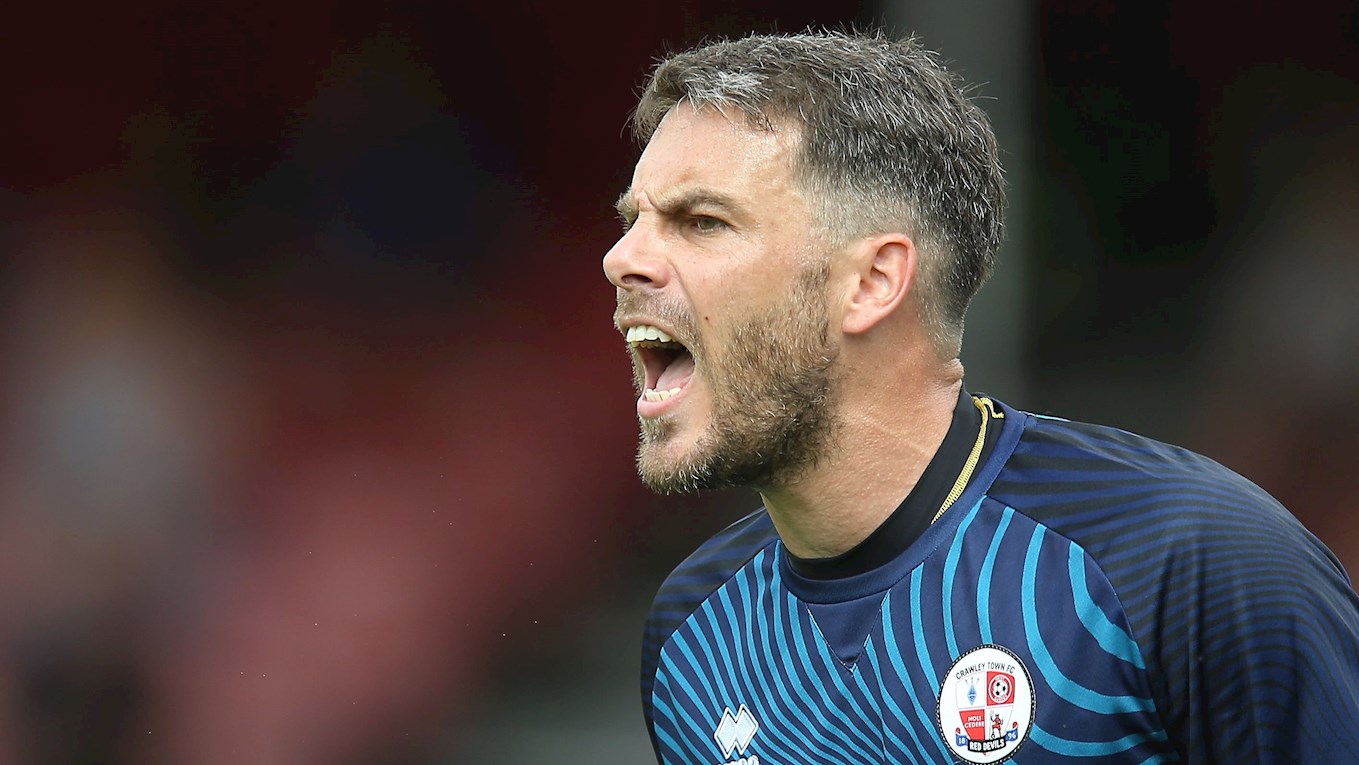 Joey Barton’s side will make their way down south to The People’s Pension Stadium on Sunday 1 December (2pm kick-off) for a place in the all-important Third Round.

The Cod Army will be sitting in the People’s Pension Stand, and the terraced KRL Stand, with tickets priced as follows:

Under 11s – FREE (*Must be accompanied by a full paying adult or concession). 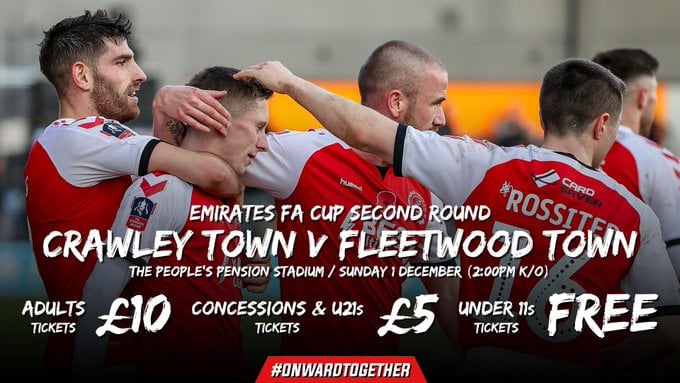 Fleetwood Town are favourites to progress into the next round of the FA Cup, and you can back that with 4/5 odds with our betting partners, SkyBet. For Fleetwood to qualify, the odds are 4/11. 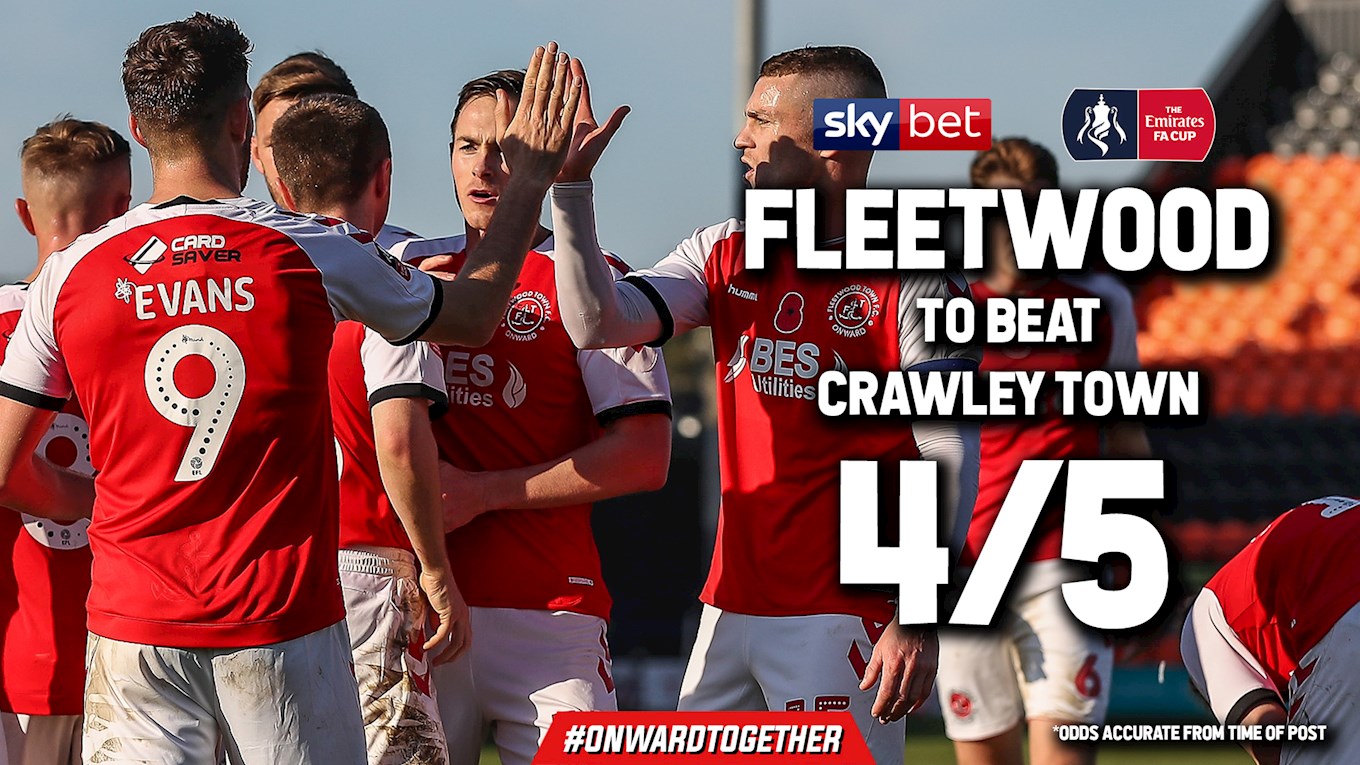 Fleetwood Town have reached the Third Round of the Emirates FA Cup after beating League Two side Crawley Town 2-1 on Sunday afternoon.

In a first half that Fleetwood edged, Josh Morris opened the scoring with a fine finish from an acute angle, but just before half-time the home side equalised through Ollie Palmer who finished well past Billy Crellin.

Super sub Paddy Madden sealed the win with a close range effort after confusion in the Crawley back line, and now Town are in the hat for Monday’s draw where the Premier League and Championship sides enter.

Crawley started off well and worked the ball well inside Town’s half when until they won themselves a free-kick, which was eventually whipped into the danger area but cleared away by Danny Andrew.

In a very different atmosphere compared to the first round tie at Barnet, the home fans were pushing their side forward, and with former Town man Ashley Nadesan breaking with pace, they had hope, but like earlier in the match, the ball was well defended by the Cod Army.

Fleetwood looked to grow into the game and when Wes Burns beat his man on the right hand side, he broke into the penalty area, however he couldn’t pick out a teammate – who if the ball had reached them, had a tap in to open the scoring.

Moments later, Burns got to the ball before his defender and his looping cross looked bound for Morris inside the 18-yard box, but Tom Dallison beat the former Scunthorpe United man to the ball.

The visitors really dominated in all area and really frustrated the home team, and the home faith in the stands and the only aspect that was missing was the first goal of the match.

Morris did however open the scoring minutes before the half-time interval. After Burns whipped in the ball into the box, Ched Evans knocked the ball onto Morris who calmly placed his shot under the goalkeeper – to make it eight for the season for the midfielder.

However, the drama wasn’t over in the first half as Palmer equalised three minutes later with a fine finish after the flicked on ball found the striker inside the box to finish the move off nicely. The teams entered the break level.

As the second-half began, it was Town who had the first opportunity of the half with Kyle Dempsey’s left footed shot. The midfielder picked up the loose ball on the edge of the box before pulling the trigger – only to see hit rise over Glenn Morris’ crossbar.

Palmer thought he had doubled his tally as well as put his side ahead of the first time in the match. After Reece Grego-Cox did well to beat Andrew on the far side, he found his forward whose strike at goal was blocked by Ashley Eastham – a superb last ditch challenge!

Boss Joey Barton made his first change after the hour mark with Madden replacing Burns, and within minutes he had put the Cod Army ahead for the second time in the match in typical Madden style. The ball did look to have crossed the line before the Irishman prodded it home.

The home side didn’t let that goal effect them and when Palmer broke down the right flank, he looked for the far corner, but could only pull his shot wide. Was there going to be a second equaliser in the game?

Town did have two chances to extend their lead with Madden latching onto a loose ball out from the keeper, but failed to hit the target. And then Evans’ with a header which was guided wide after Paul Coutts’ out-swinging corner reached the Welshman.

Madden nearly scored his second after Dempsey’s low cross was met by the forward, but his glancing header went agonizingly wide of the inside post.

Barton’s side saw out the remainder of the game out with Crawley pushing hard for an equaliser, but they are now in the hat for the draw which will take place on Monday at Manchester City’s Etihad Stadium.

Now Town have a Fylde Coast derby match to prepare for with Blackpool their next opponents in Sky Bet League One at Bloomfield Road next Saturday.

Make sure to get your tickets for Fleetwood Town’s Emirates FA Cup Second Round tie against Crawley Town on Sunday 1 December (2pm kick-off).

Joey Barton’s side are set to make a long trip down south to face The Red Devils this weekend, as they look for a place in the coveted Third Round draw.

Ticket prices for the game at The Peoples Pension Stadium are as follows:

Coach travel is also on sale, with the price just £5 for Onward Card holders and £23 for all supporters. Coaches will be departing Highbury at 6:30am.

If you are in need of any further information on the fixture, contact the ticket office on 01253 775080 or visit the club shop at Highbury Stadium. 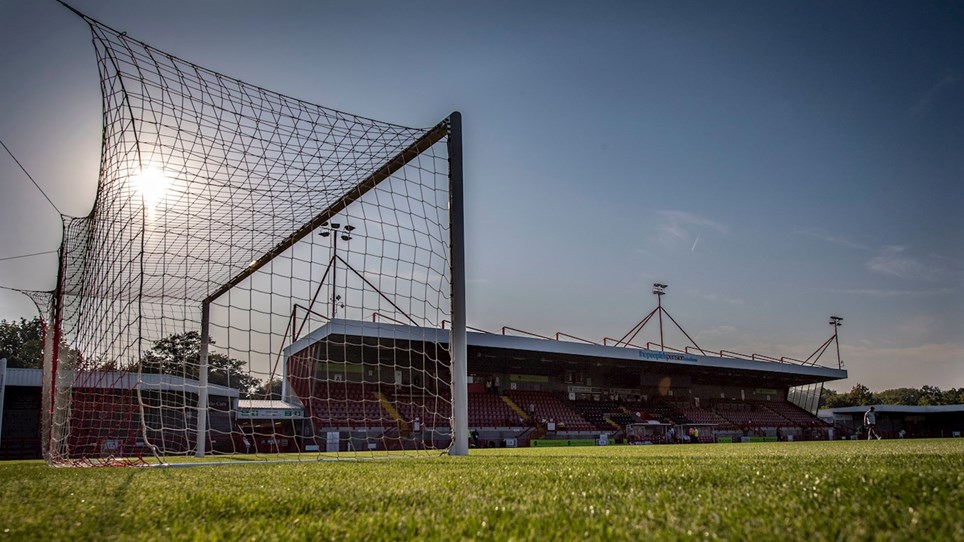 
Tickets and coach travel for Fleetwood Town’s Emirates FA Cup Second Round tie at Crawley Town are now on sale.