The Cod Army are set to take on Accrington Stanley on Saturday at Highbury, and we have all the information you need to know in this preview.

Fleetwood have started the season well, with two back-to-back wins against Peterborough United and AFC Wimbledon in the first two games, before heading to The City Ground to face off against Sky Bet Championship side Nottingham Forest in the Carabao Cup.

The Cod Army then travelled to the Keepmoat Stadium to take on Doncaster Rovers, and ended up playing out a five-goal thriller, with the home side taking the points after an own goal in injury-time.

Joey Barton’s side proved that they can stay in games up until the final whistle on Tuesday as a last-gasp equaliser from forward Paddy Madden meant the points were shared between Fleetwood and Wycombe Wanderers on a wet and windy Fylde coast. 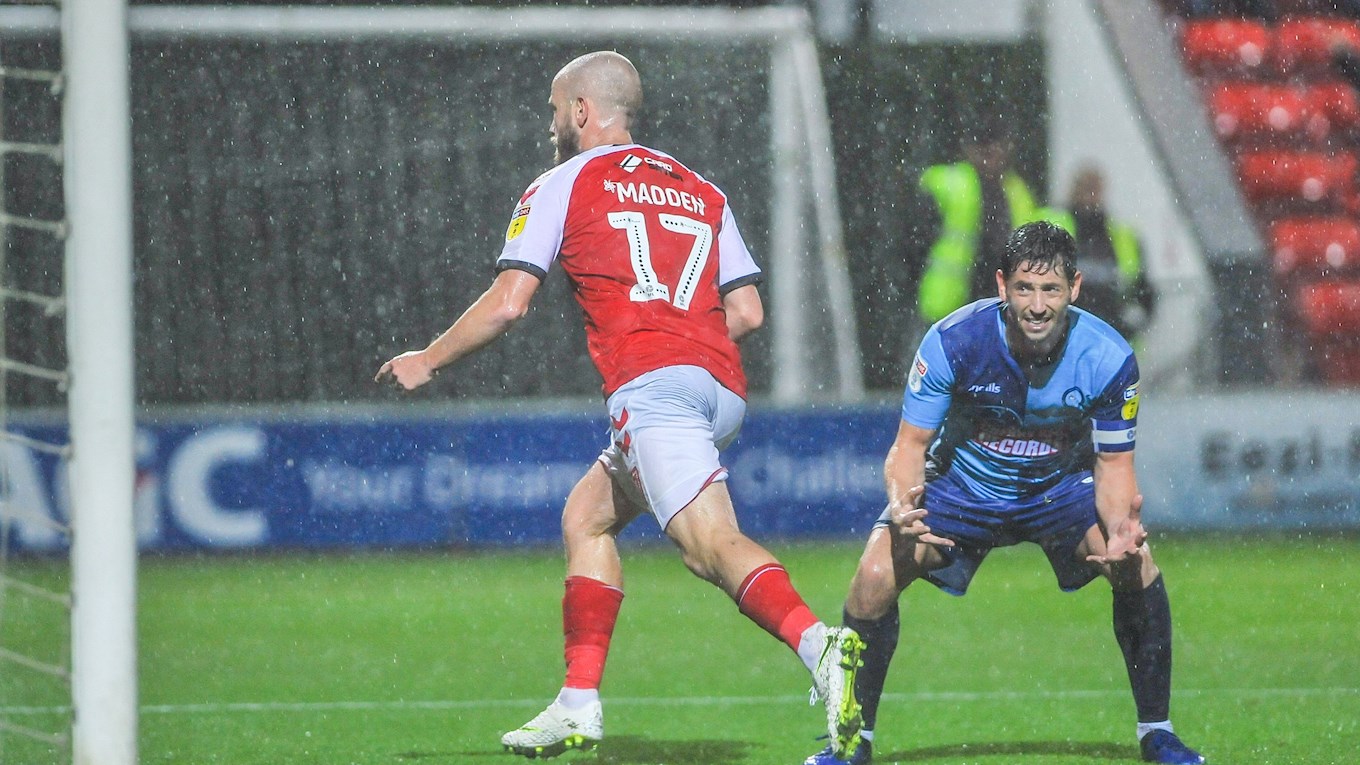 Accrington haven’t quite got going yet this season, as they are currently sitting in 21st after playing three games.

Stanley’s first game of the season was against Lincoln City, which they lost 2-0 at Sincil Bank after goals from Michael O’Connor and John Akinde.

They then travelled to AFC Wimbledon last weekend and, even though Zaine Francis-Angol was sent off, Colby Bishop’s goal secured a point for John Coleman’s side.

Accrington took on Shrewsbury on Tuesday in their first home league game of the season, and with five goals coming in the second half, it was an exciting watch.

Bishop opened the scoring with a penalty before Dion Charles doubles their lead. An own goal brought The Shrews back into the game and gaols from Fejiri Okenabirhie and Daniel Udoh in the last five minutes meant that the away side took all three points. 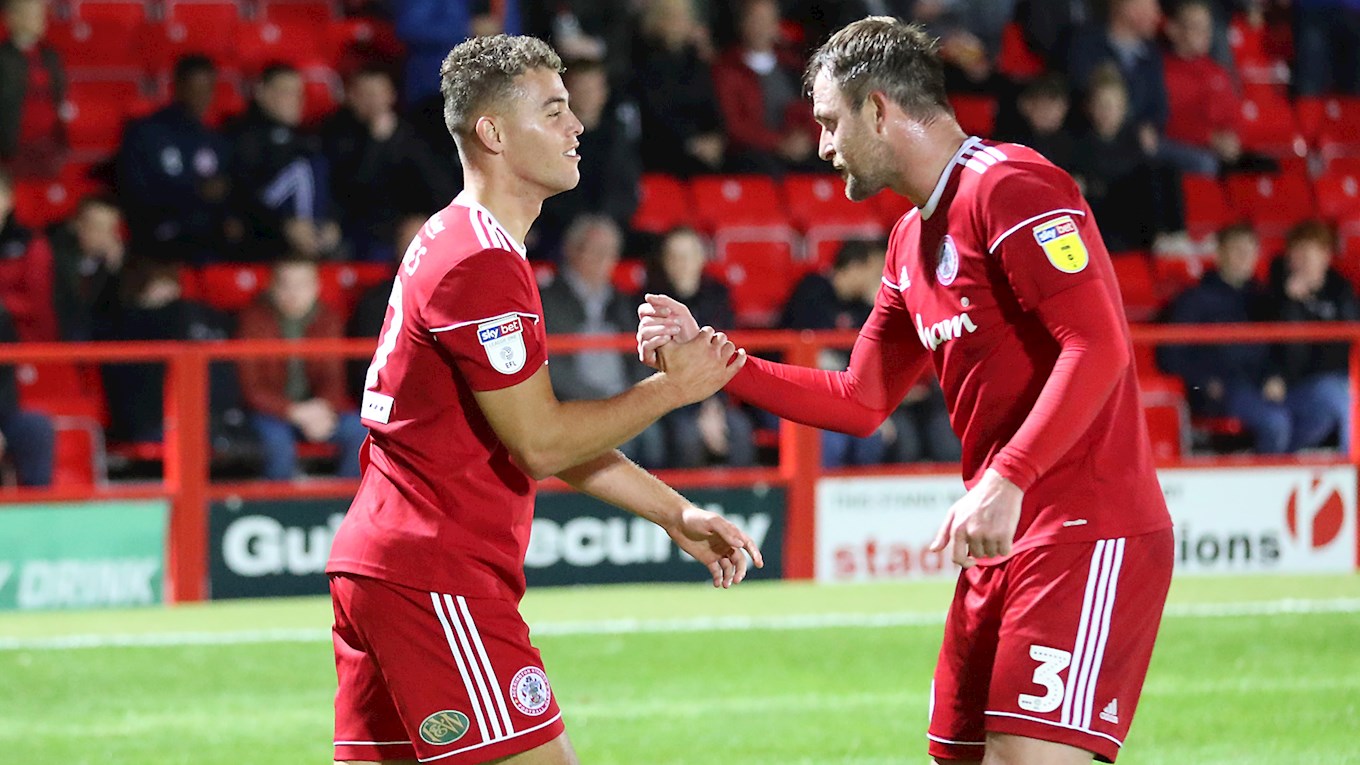 Can’t make it to Highbury on Saturday? Don’t worry as you can keep up to date with the game through our official iFollow!

For just £2.50, supporters who are based in the United Kingdom and abroad can listen to match updated from the comfort of their own home. 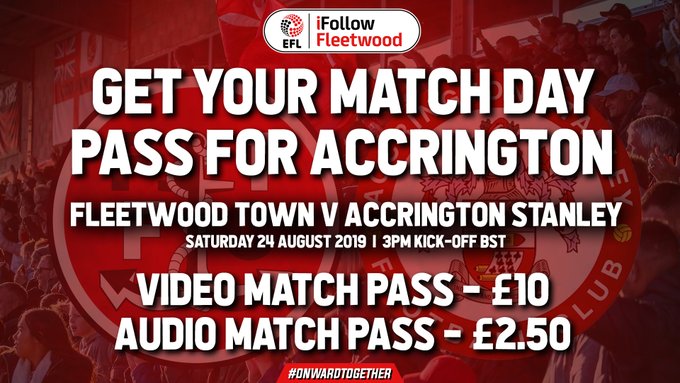 LAST TIME WE MET AT HIGHBURY

The last time Fleetwood and Accrington met at Highbury was back in September 2018, and it ended up finishing 1-1 after goals from Cian Bolger and Sean McConville.

Former defender Bolger headed The Cod Army into the lead in the 37th minute but McConville equalised with 20 minutes left which extended each side’s unbeaten league run to seven games. 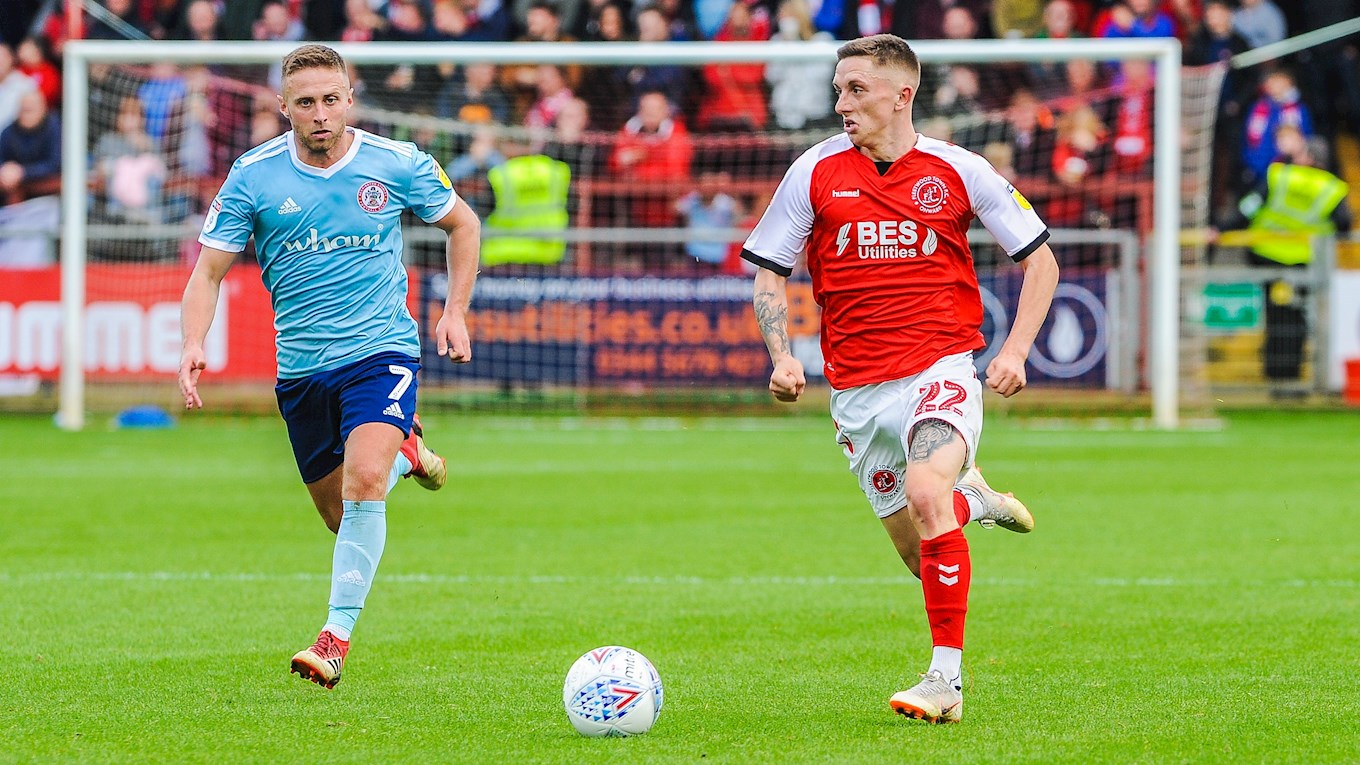 The one to watch for Accrington on Saturday is young forward Colby Bishop, as he has scored three goals in four games (in all competitions) for the side so far this season.

He then went on short loan spell to National League North side Gloucester City, where he would score two goals in nine games.

After a short loan spell to Gloucester City, Bishop made the move to Worcester City, where he made 25 appearances and scored eight goals in a season.

A short spell to Boston United followed before he headed to Leamington, and this is where he hit his best run of form so far in his career. Even though he had to split his playing time with a job in school, he managed to score 33 goals in 53 games, which got the attention of Accrington.

Since arriving at Stanley in July, he has scored in three of the four games he has played for the club and is seemingly keeping up the form he showed in National League North. 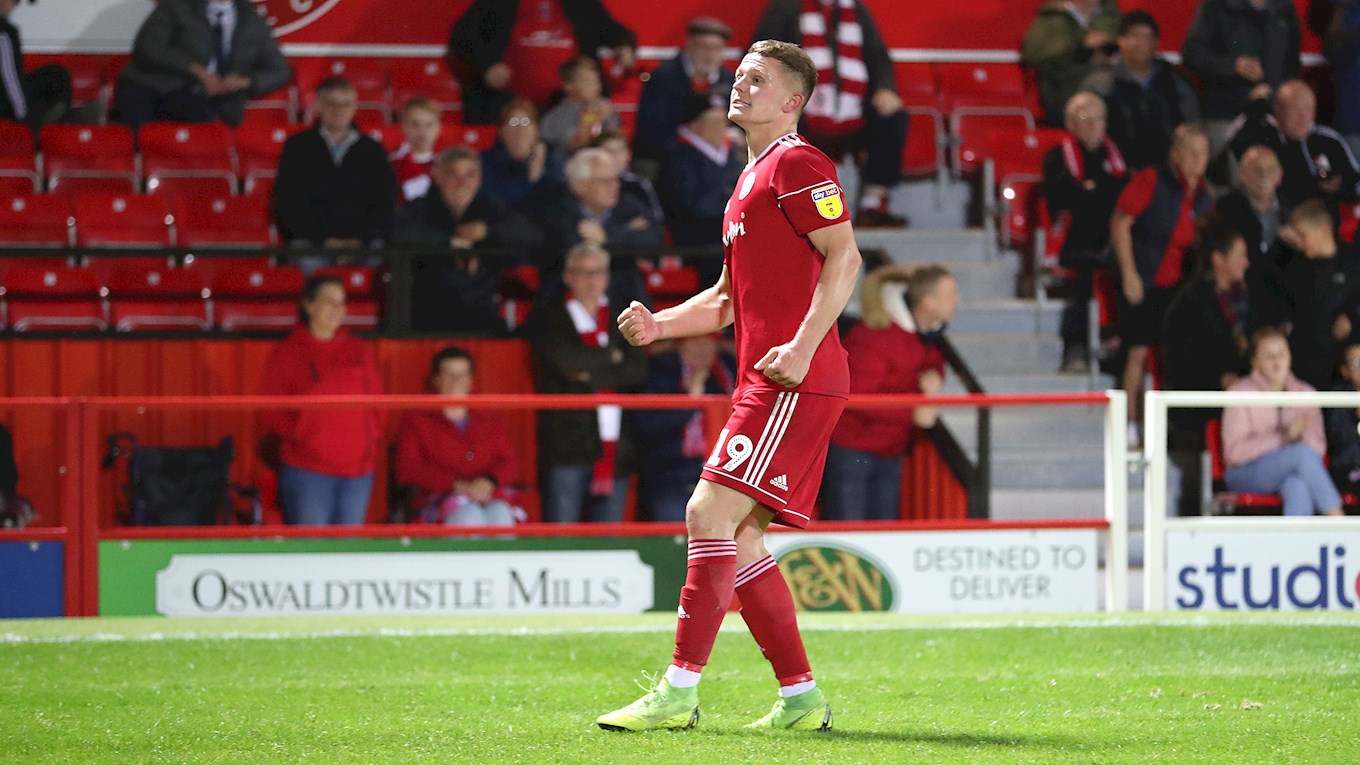 “I met John Coleman in the Summer on holiday, I was with a group of mates and he was out there golfing – we had a good laugh and chewed the fat really. We debriefed the season, talked about the trials and tribulations of being a League One manager.

“Obviously John’s got an enormous amount of experience. You’ve just got to be a sponge when you are in his company and I enjoy spending time with all the coaching staff at Accy. When we play them, whether we win, lose or draw, we always try to put the result to one side and maintain the friendships because we have a derby kind-of rivalry. We’re desperate to beat them, and they’re desperate to beat us and that’s the way it should be.” 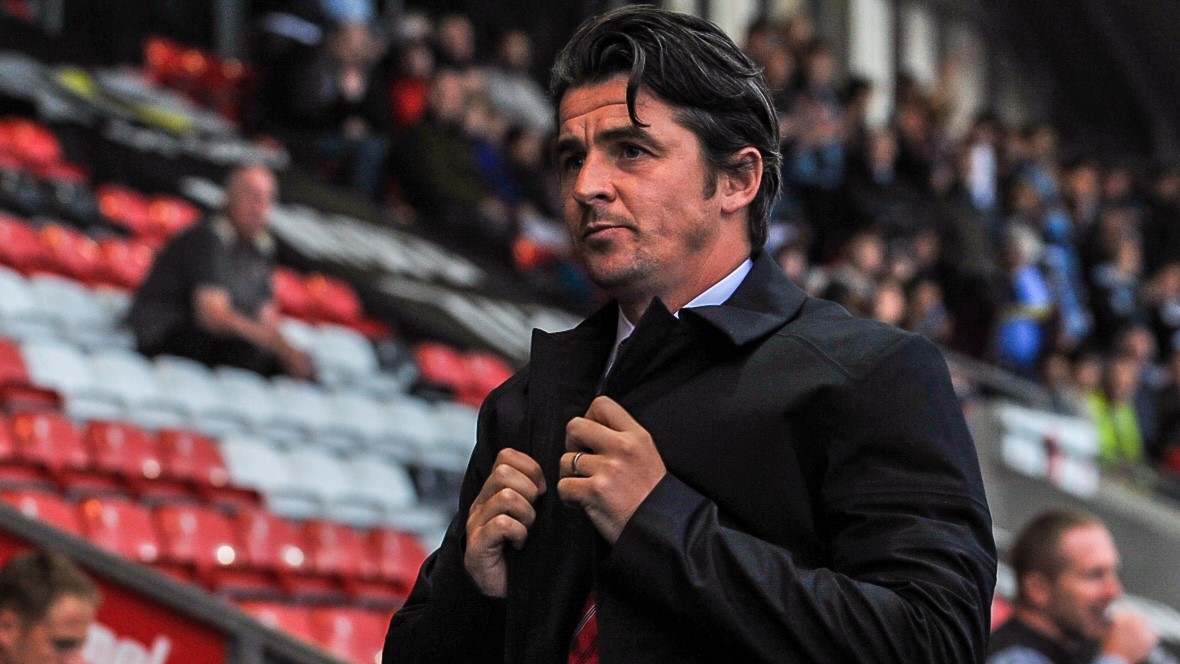 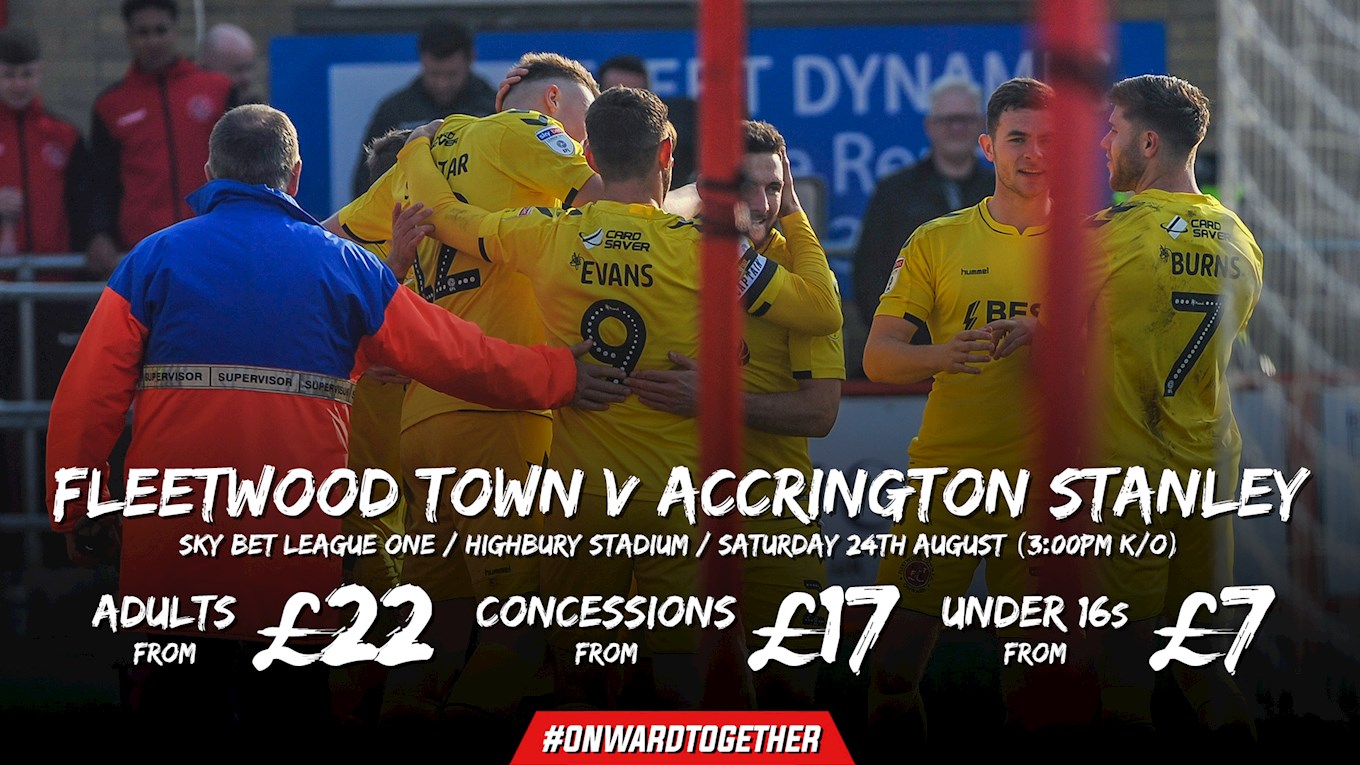 For Fleetwood Town to pick up all three points against Accrington Stanley on Saturday, the odds are currently 3/4, with a draw between the sides priced at 5/2.

The odds for Fleetwood to win and both teams to score has been given a price boost, seeing the odds go from 11/4 to 10/3.

After scoring a last-gasp equaliser against Wycombe on Tuesday, Paddy Madden is 7/2 to be the last goal scorer and is 13/10 to score anytime during the fixture.

On a glorious afternoon on the Fylde Coast, it was Fleetwood who took the lead through Madden – making it four goals in as many games.

Evans made his second debut for the club coming on as a second half substitute, and made it two nil midway through the second half to give the Cods all three points.

Stanley winger Sean McConville was sent off with 15 minutes to go for a slap on Evans, but the result was in doubt well before that decision.

As seen on a number of occasions under Joey Barton’s tenure, his side started off the game on the front foot and looked hungry from the first whistle.

Paul Coutts had the first chance of the game after great build up play from the home side. Wes Burns set up the midfielder, however the former Sheffield United man just hit his shot over from outside the box.

Town were on top for the first quarter of the game and when Lewie Coyle broke down the right flank, he found himself in an unusual position just outside the opponents’ penalty box. He struck his effort well, with Dimitar Evtimov making a good save in the Stanley goal.

Accrington’s first shot at goal came with their first meaningful attack. McConville drifted inside onto his first foot and pulled the trigger. His shot was deflected for a corner.

With the resulting corner, the visitors nearly opened the scoring. Mark Hughes’ header back across goal caused problems in the Town penalty area, with Paddy Madden there to clear the danger deep inside the penalty area.

The man who saved Barton’s side from going a goal down then made it one nil to the Cod Army. The Irishman got onto the end of a lovely move and slotted Coyle’s cross off into the far corner. A superb first-time finish!

Ashley Hunter nearly made it two nil moments after, but he saw his low driven strike at goal saved by the Stanley goalkeeper.

As the two sides went in for the half-time break, the temperature inside the stadium rose with the fans optimistic of Barton’s side remaining unbeaten on home soil this season.

Hunter and Madden linked up well five minutes into the second half, with the inform striker giving Hunter the assist, but the wide man failed to hit the target with his half volley.

Stanley reacted to the quick start from Town, and when Colby Bishop rose the highest inside the penalty area, his looping header looked goal bound. Gilks was there to tip the ball over crossbar.

Evans made his second debut for the club just after the hour mark, and received a huge round of applause from the Cod Army as he replaced Madden as the lone striker.

And within minutes, he had the chance to put Town ahead and double their lead. Harrison Biggins broke forward and picked out the Welshman – whose firm effort at goal was saved.

It was from the penalty spot he made it two goals to the good for Fleetwood. Josh Morris was fouled in the area and there was only one man who was taking it. Coolly as you like, he slotted it past the keeper into the corner.

The drama continued at Highbury with McConville being shown a straight red for a raised arm on Evans – and with the referee right under it, there was only one card that was being shown.

The Cod Army were comfortable late on, and deservedly came away with the points!