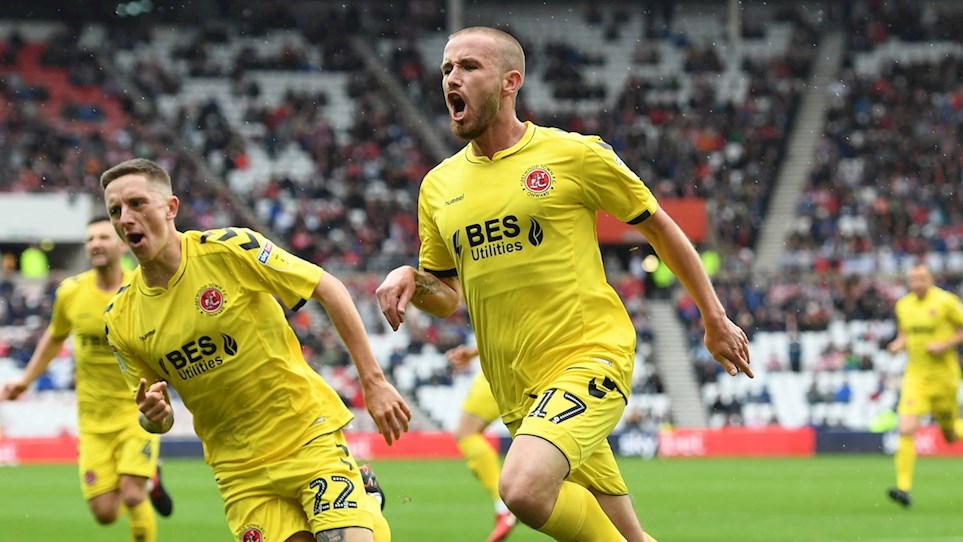 
There are just ten days to go until Fleetwood Town’s hotly anticipated Fylde Coast derby with Blackpool and tickets are on general sale.

Fleetwood Town beat local rivals Blackpool for the first time ever after goals from Wes Burns, Ross Wallace and Paddy Madden sealed a brilliant 3-2 win at Highbury on Saturday.

Burns opened the scoring with a stunning long-range effort after just four minutes, before Wallace also fired in from long range to double Town’s lead with just 11 minutes gone.

Jordan Thompson replied in the first half for the away side before substitute Paddy Madden added a third for Town to make it 3-1.

Nathan Delfouneso pulled one back for the Seasiders, but Town held on to claim their first ever win over Blackpool to the joy of the sell-out home crowd.

It took just four minutes for the Cod Army to see a first ever league goal at Highbury against Pool.

Burns won the ball in midfield and cut past two Blackpool players, before unleashing a stunning 25-yard strike that flew past Mark Howard and into the bottom corner. A goal worthy of winning any game.

Town’s lively start continued as they applied more pressure on Blackpool. Full-back James Husband chipped in a cross towards Ched Evans at the back post ­– his placed effort failed to hit the target.

With Town hitting numerous crosses into the Blackpool box, there were some raised eyebrows when a corner was cut back to Wallace, who was around 25 yards from goal.

But the Town midfielder skipped past his man and smashed a shot into the bottom corner to give Town a 2-0 lead after just 11 minutes. Not even the greatest of optimists could have predicted such a wonderful start for the home side!

Town continued to press forward and after good hold up play by Evans, Burns turned Liam Feeney and closed in on goal. His initial effort was blocked, and after controlling the rebound, Burns hit a left foot shot at goal, but Howard saved well with his feet.

Town were all over Blackpool in the early stages of the match, with Burns, Hunter and Evans causing their defence all sorts of problems.

The Seasiders searched for a route back into the game as Feeney’s cross was met by striker Armand Gnaduillet in the box, but he couldn't guide his header towards goal.

With Blackpool beginning to push forward, they pulled one back after 35 minutes when Feeney crossed in from the left and Thompson guided the ball in at the back post to make it 2-1.

With 41 minutes gone, Town almost regained their two-goal advantage when Ashley Hunter laid the ball onto Jason Holt, who drove into the box and shot just wide of the post.

Tempers began to flare just before half time, with the referee forced to have a word with Gnaduillet and Evans as Town went into the break with a 2-1 lead.

Harry Pritchard came on for Feeney at half-time for Blackpool, but within minutes of the restart Town came close when Hunter hit a dangerous ball across the box, but neither Evans nor Burns could reach it.

Thompson then drove into the box and crossed towards Gnaduillet, but captain Craig Morgan produced a pivotal block to clear the danger - doing so once again just minutes later when Marc Bola crossed the ball in.

With 55 minutes gone, Barton made a change as Wallace made way for Madden, and he made the ultimate impact by finding the net just two minutes after coming off the bench.

Hunter crossed the ball to Madden, whose first time shot sailed straight into the top corner as Town claimed a 3-1 lead.

But it lasted just three minute as Town failed to clear a long ball, visiting striker Delfouneso placed the ball in the bottom right corner to pull a goal back for the away side.

With 66 minutes gone, Spearing opted to square a corner to Bola on the edge of his box, and his wild strike flew way over, clearing the Percy Ronson Stand.

With the result still firmly in the balance, tempers ran high as Town assistant manager Clint Hill pushed Bola, with both players and managers from both sides caught up in the melee. Hill was then shown a red card, while the referee booked Bola.

Blackpool introduced Mark Cullen and Michael Nottingham to the fold in the 73rd minute, as they looked for an equaliser.

But Town continued to push as Holt picked up a loose ball and played in Hunter on the left, and he smashed his shot over the bar.

It was a scrappy ending to the game neither side could keep hold of possession. Blackpool pushed forward in search of an equaliser, but Town’s defence remained solid. Morgan and Ashley Eastham put in solid performances, producing numerous clearances to keep the Seasiders at bay.

In the last minute of the game Blackpool striker Gnaduillet was shown a straight red card for grabbing Husband’s neck and throwing the Town man to the ground. Players from both teams were caught up in argument, and the referee had no choice but to dismiss the striker.

The referee then blew for full time to bring a thoroughly entertaining game to an end as Town claimed a first ever win against their Fylde Coast rivals. The 3-2 victory ends Blackpool’s 11-game unbeaten run and lifts Town up to 10th in the League One table.


There are just ten days to go until Fleetwood Town’s hotly anticipated Fylde Coast derby with Blackpool and tickets are on general sale.

Saturday's Fylde Coast derby with Blackpool is now just around the corner - with tickets becoming limited for the hotly anticipated match.

Joey Barton’s side take on The Seasiders on Saturday 27th October (3pm) at Highbury Stadium – you don’t want to miss out on this great game!

Ticket prices for the Category A game are as follows:

You can purchase tickets over the phone by calling 01253 775080, by visiting the club shop at Highbury Stadium or reception at Poolfoot Farm or online here. 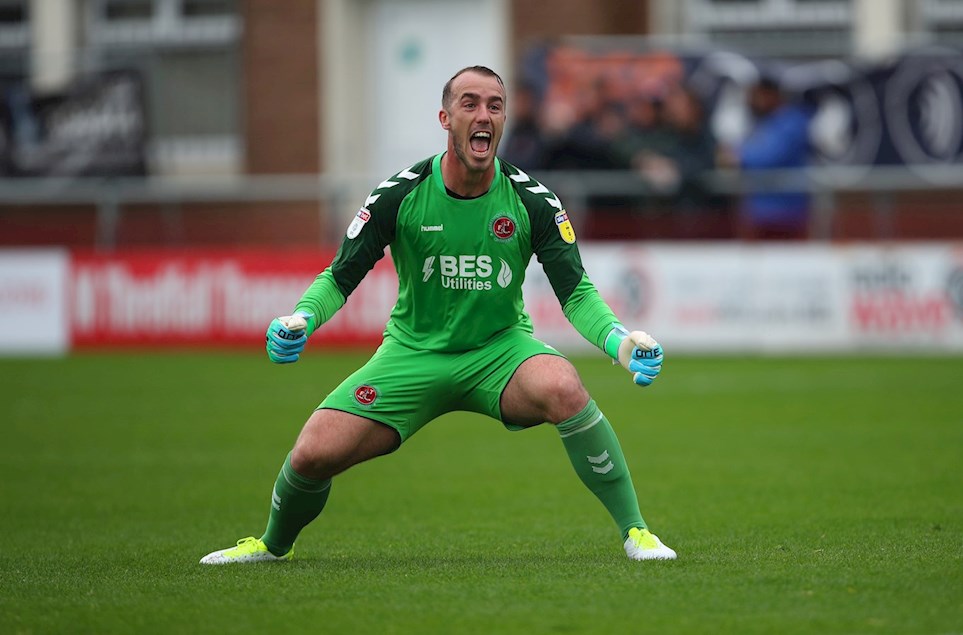 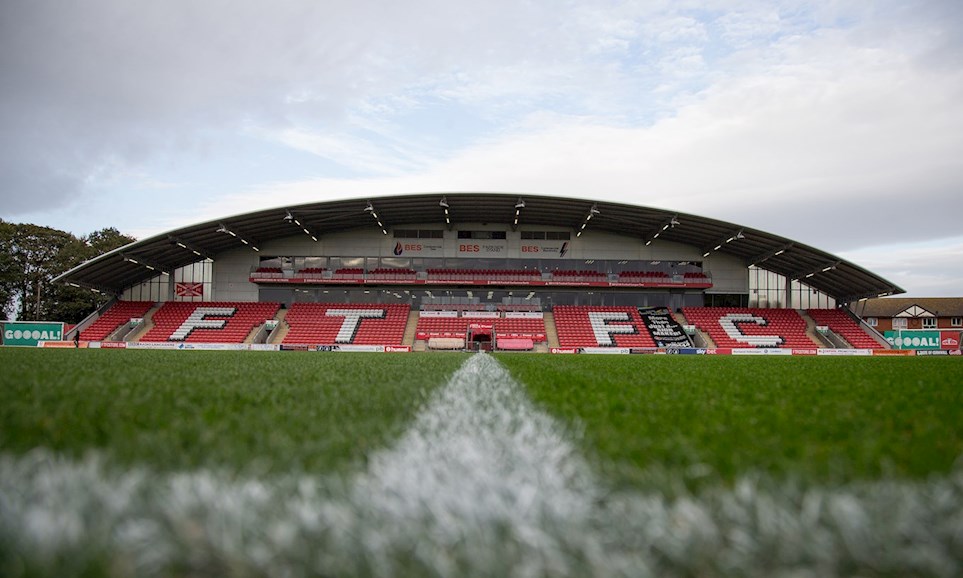 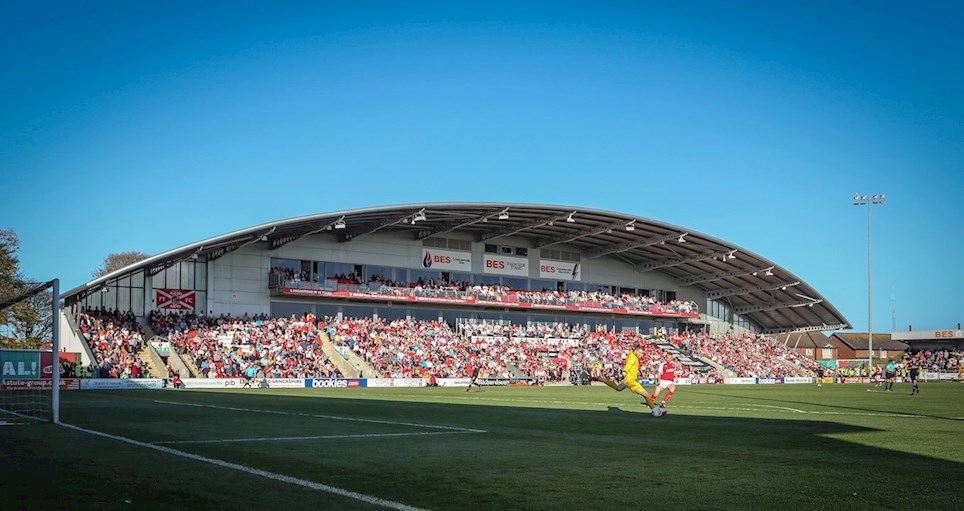 
Onward Card holders will be able to purchase two tickets per member for the game against Blackpool from Monday 1st October.