Scunthorpe United are the visitors at Highbury Stadium this weekend as Fleetwood will be looking to back it back to back wins in the league for the first time since October.

Here is all you need to know ahead of our clash against Scunthorpe United:

Fleetwood Town will be wanting to start a good run of form after Tuesday night’s comfortable 3-0 win away at AFC Wimbledon. The Cod Army will be confident they can pick up the 3 points at home to 16th place Scunthorpe United, as last time the teams met, it was at Glanford Park where Fleetwood came out victorious with an emphatic 5-0 win.

Striker Ched Evans will be looking to build his run of form with his two goals against AFC Wimbledon on Tuesday - which takes his tally up to 12 in all competitions for the 30-year-old - including a brace away at Scunthorpe on the 22nd August when the two sides met earlier in the season.

Fleetwood skipper Craig Morgan will also to be looking to continue his good form if he features by leading the back line by example. The captain and Ashley Eastham have formed an impressive partnership in the centre of the back four, with Alex Cairns keeping a clean sheet in the last round of matches. 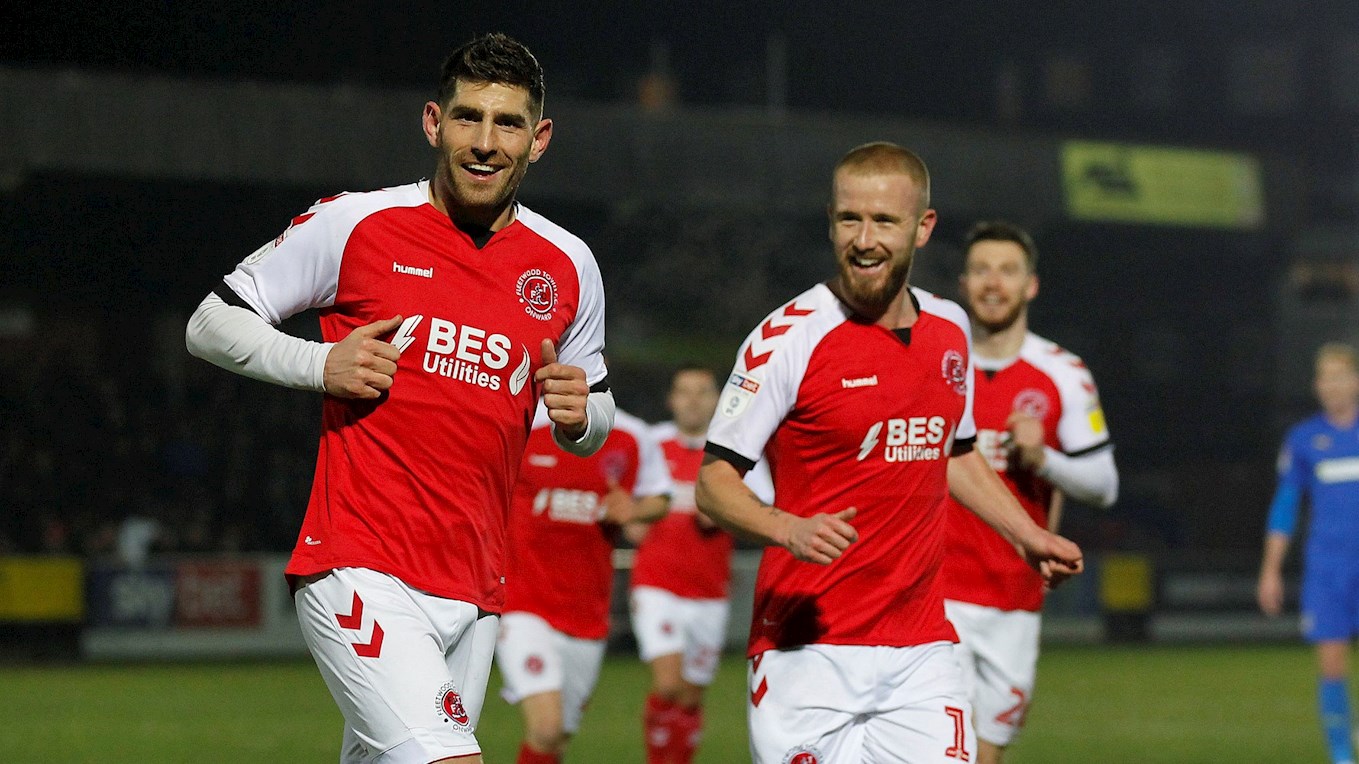 The visitors Scunthorpe will be looking to climb as high as they move up the Sky Bet League One table as they started this season’s campaign in poor form.  After a positive run of unbeaten results in the past five under newly appointed manager Stuart McCall, the Irons will be hopeful that they get maximum points on Saturday against a tough Fleetwood side.

The away side will also have a huge reason to come out on top against the Cod Army after the team in red put 5 past them in an emphatic manner at the start of the season, the away team have an extra reason for revenge this time around.

In comparison to last season’s efforts finishing 5th in a play-off spots with 74 points, the team from North Lincolnshire back at last season, and potentially build on the impressive promotion chase from last campaign, where hey narrowly lost out 4-2 on aggregate to Rotherham United. 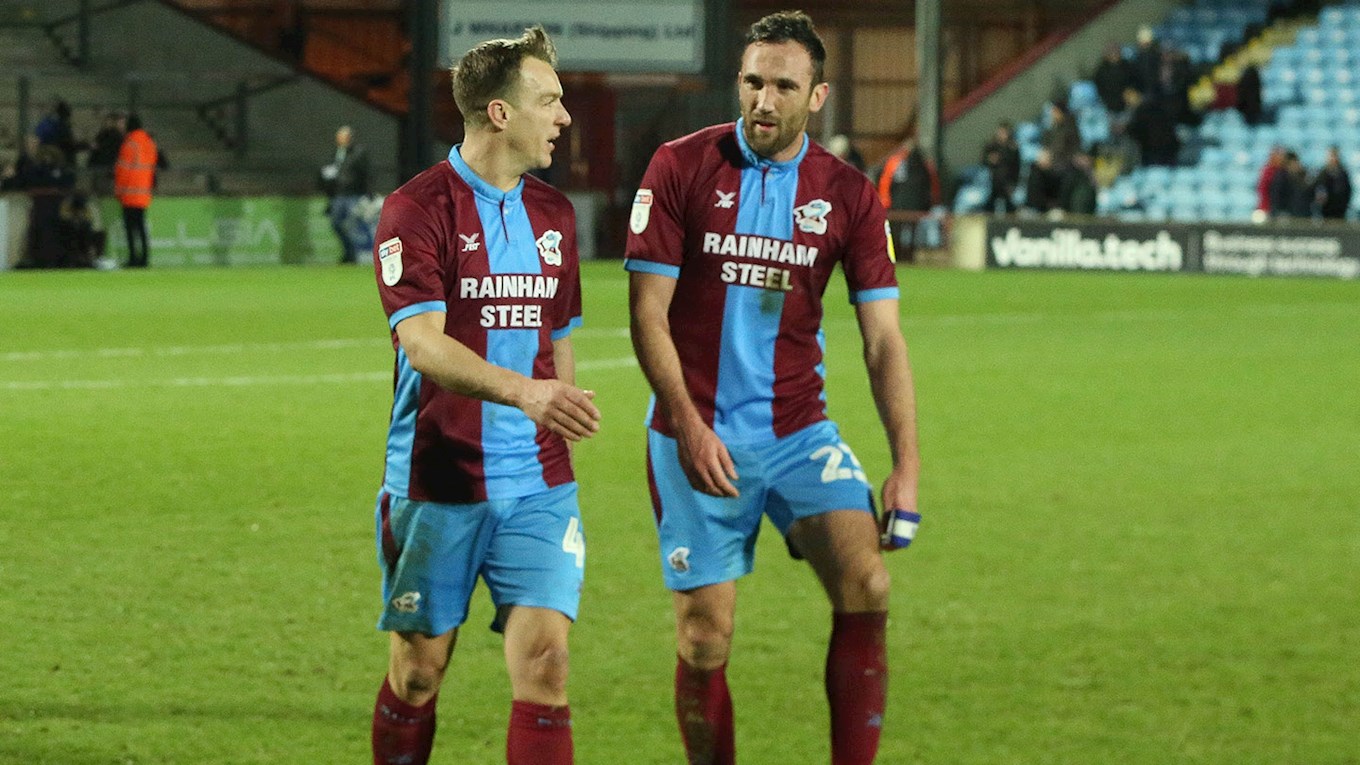 The two teams last met on the Fylde Coast on Saturday 3rd February, with Scunthorpe coming away with all three points with ex- Fleetwood number 11 Josh Morris opening up the scoring for the visitors. Morris converted from the penalty-spot and placed it out of reach for Chris Neal's hands. Fleetwood then reacted well from an Ashley Hunter strike for then Bobby Grant to tap in the equaliser, but it was the Irons who had the last laugh with an Ivan Toney free-kick for the winner.

One to watch: Adam Hammill

Hammill is a product of Liverpool’s famous academy, but failed to make a senior team appearance- as a result of this he had respective spells at Dunfermline, Southampton, Blackpool before signing for Barnsley on a permanent deal in 2010 after a successful loan period in 2009-scoring 12 in 64 from the wing.

Hammill then went on to sign for Wolverhampton Wanderers then loans to Middlesbrough, Huddersfield and Rotherham before entering his second spell at Barnsley from 2015-2018 where on his second debut for the club he scored the winning goal in a 2-1 win in the Quarter final of the Football League trophy tie against York City.

On March 27th 2011, Hammill was called up to the England Under-21 squad for the first time where he went on to make his international debut against Iceland, coming on in the 74th minute for Stuart Pearce’s men. 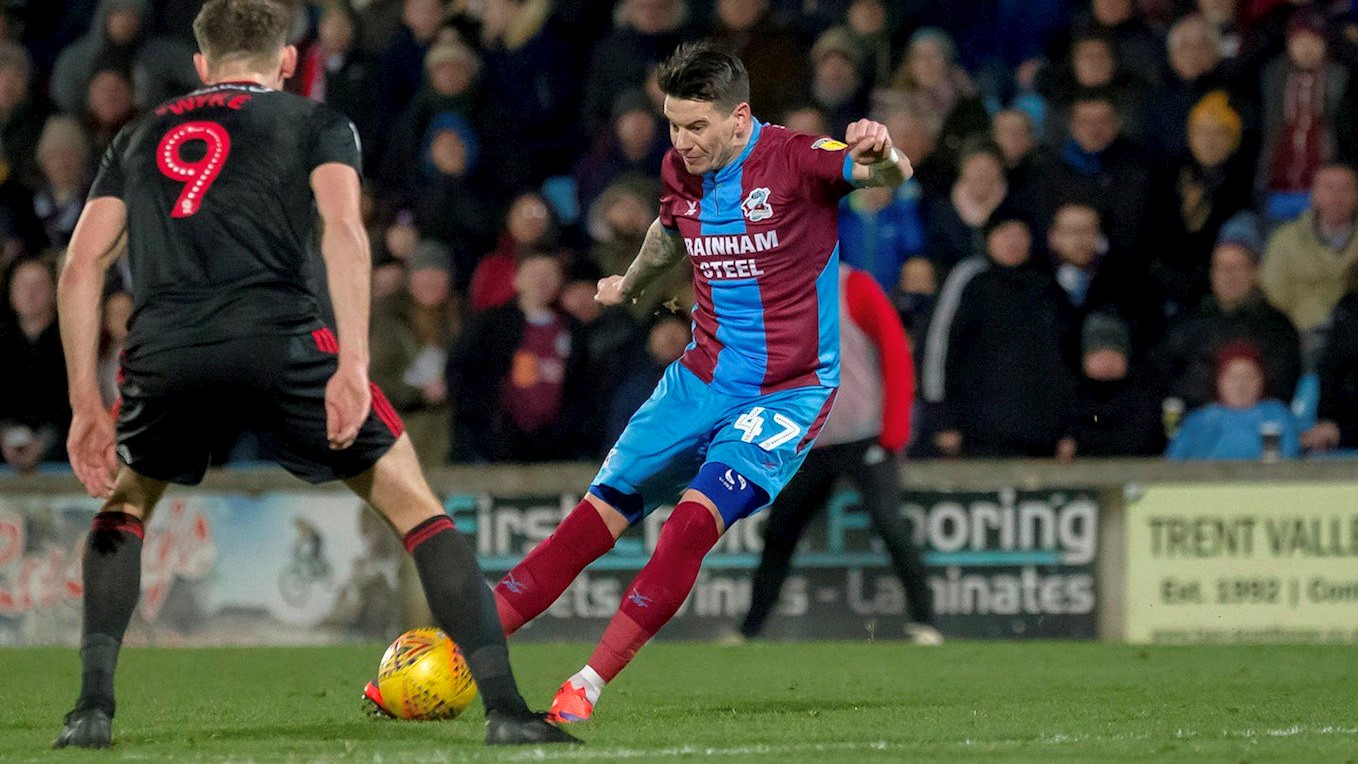 “We’ve got a tough game against Scunthorpe at home, they have done well since Stuart McCall came in and we will have to be on our best performance to make sure we get maximum points at home.

“Scunthorpe are a side who have had a pick up-unbeaten in their last five games- and yes we have beaten them comfortably, but we know if we execute our game plan right, we know we will cause them lots of problems.

“I am looking forward to the challenge ahead at Highbury and if we give the best version of ourselves, we will get the three points.” 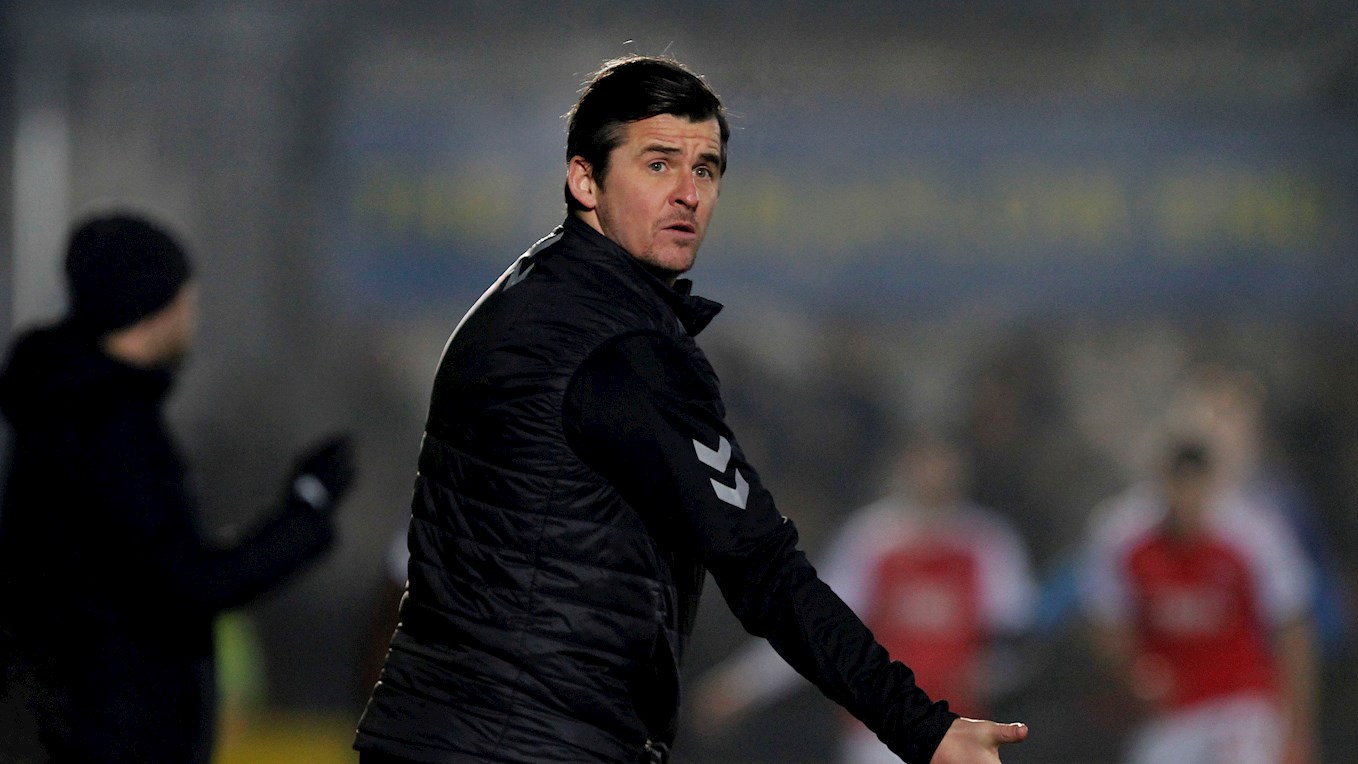 “Every game is difficult, they’ve started really well, 3 or 4 games without a win but likewise you can go onto win 3 or 4 game on the bounce. They had a really good result the other night down there at Wimbledon getting a good 3-0 result- watching that game back it could’ve been four or five.

They’re in a good place, Ched Evans just coming back from suspension, gets two; they’ve got a lot of attacking options obviously the likes of Paddy Madden who’s done very well for them this season.

You can see they’ve changed their system to a type of 4-3-3 and it’s been successful for them. We are very aware with what they are going to bring and how good they can be, but likewise we are on a good run of form with a lot of good players that are at the top of their game and are feeling good about themselves and it’s another game to look forward too.” 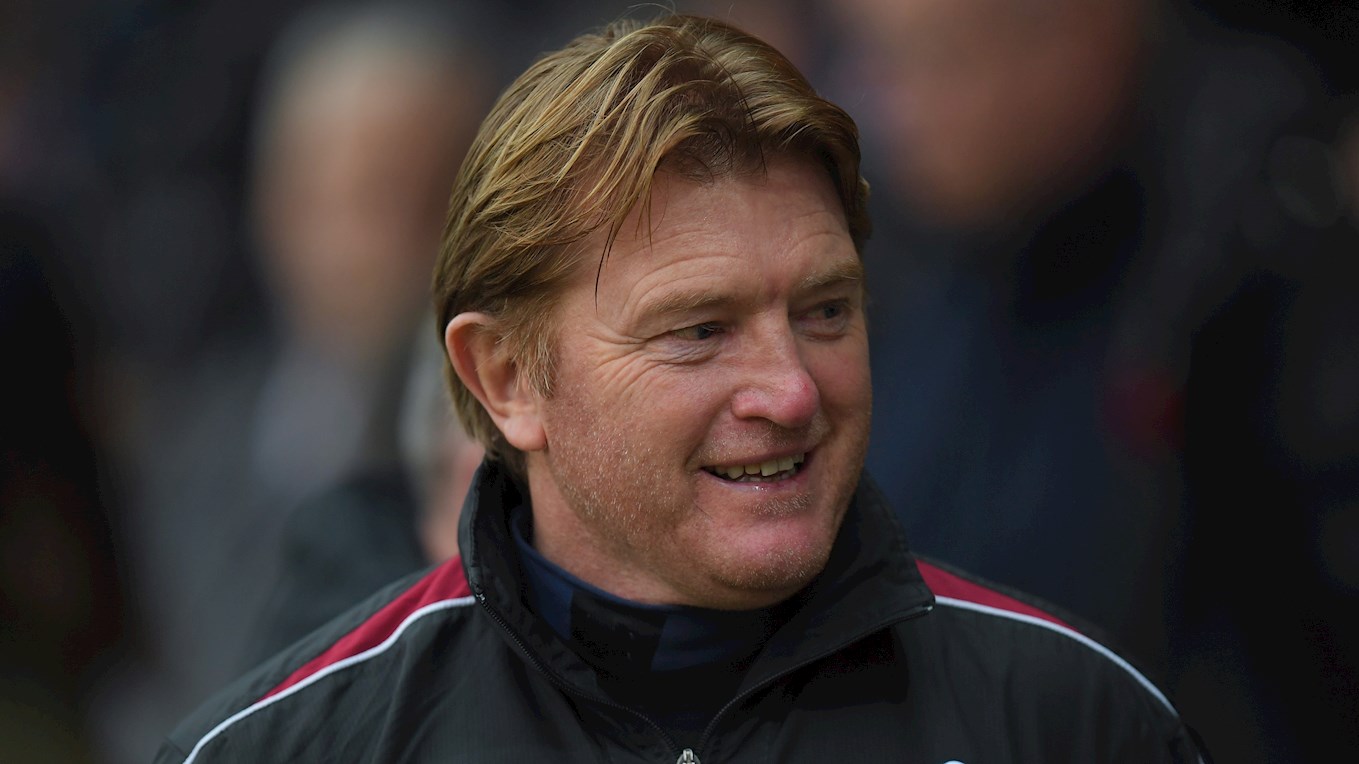 Fleetwood Town fans who haven’t yet purchased their tickets for the match can still buy theirs online, over the phone or at either of our club shops at Highbury or Poolfoot Farm. With Joey Barton’s side unbeaten in the league in 2019, Saturday will be a chance for supporters to help them extend that run.  Click here to buy yours online today! 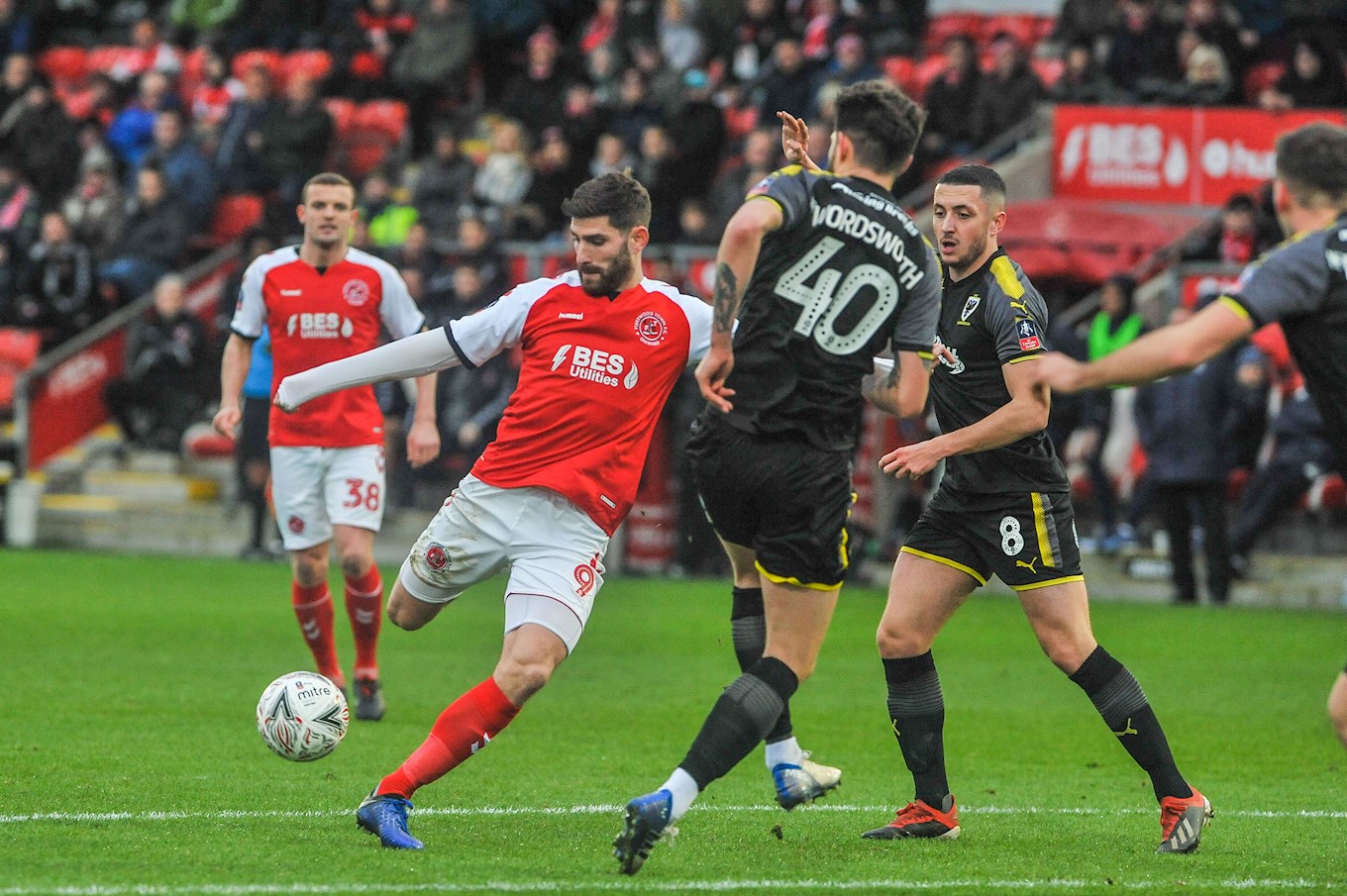 If you fancy a home win for Fleetwood then they’re backed at 6/5 as they look to pick up a bit of form.

For a Scunthorpe away win they’re backed at 21/10 as they look to climb up the table for form.

In the past three years there has not been a draw between the past 2 teams, if one was over due  then the odds are 23/10.

Fleetwood Town slipped to a 1-0 defeat to in-form Scunthorpe United at Highbury on a wet Saturday afternoon.

Fleetwood created many chances in the first half and had spells of dominance, with the best chance of the half coming to Ashley Nadesan who fired his shot just past the post from a tight angle.

This narrative continued into the second half, with the Cod Army continuing to make chances. Unfortunately, Ashley Eastham deflected substitute Levi Sutton’s low cross into the roof of the net to give the visitors the points, despite them not having a shot on target.

The game began in a scrappy manner as a result of both teams getting used to the weather conditions, on a very grey day in Fleetwood. It was the visitors who started quicker though, winning a corner inside the opening two minutes but it was cleared with ease by Town defenders.

The hosts soon got to grips with the conditions and created a brilliant opportunity, after Ross Wallace found Jason Holt with a lovely chipped through ball. However Iron keeper Jak Alnwick, on loan from Rangers, was out quick to save Holt’s attempt from inside the area.

Alnwick was in action again, just two minutes later in the 15th minute, as the keeper was off his line quickly to deny a Fleetwood forward a possible opportunity from Ched Evans’ through ball.

James Husband gave away a free-kick close to the touchline, eight minutes later, which was swung in by Cameron Borthwick-Jackson leading to a stunning save from Alex Cairns to deny Paddy Madden’s attempted clearance from going in.

The game remained quite open however Town seemed to be on top, creating more chances than the visitors. Ross Wallace troubled Alnwick with a strike from distance, in the 34th minute, but the loanee managed to push it round the post.

Nadesan, still looking for his first Fleetwood Town goal, was found through a long ball from Husband. The forward had time to get the ball under control and drive at goal, but his shot was just wide from a tight angle.

The Cod Army came out of the break with a chance of an early goal but Cameron Burgess cut out Holt’s pull-back to deny Madden a shot on goal.

Two minutes into the second half and Town had their second chance, as Nadesan latched onto a stray pass before getting a shot off at goal from a tight angle but Alnwick was there at the rescue for Scunthorpe.

The opening 15 minutes of the second half was predominantly all Fleetwood, with Town having another two chances in short succession. Ross Wallace’s free-kick was parried away by Alnwick after it bounced awkwardly in front of him. Then just two minutes later Alnwick pulled out a top save to deny Madden his 17th goal of the season.

The Irons’ first chance of the half came in the 62nd minute after Funso Ojo struck one with venom but it glided past Cairns’ post and out for a goal kick. Seven minutes later and Ross Wallace had another chance for Fleetwood but the effort is just wide of the post, similar to Ojo’s.

Scunthorpe scored in the 74th minute, against the run of play, as Eastham deflected substitute Sutton’s dangerous low cross past Cairns.

Ross Wallace and Wes Burns combined well down the right, allowing Burns to hit a low cross into a dangerous position but Alnwick got down well to smother it. James Wallace picked out Evans with a great ball over the top, nine minutes later, but the strikers’ effort was straight at Alnwick.

The Cod Army suffered their first league defeat of 2019, and will look to bounce back at home to Charlton Athletic next Saturday.