Town travel to south London as they are set to face AFC Wimbledon in a cold, snowy Kingsmeadow. The side are looking to get back to winning ways after two draws in a row against Oxford United and Rochdale respectively.

The Wombles, who have won just one of their last five matches, sit bottom of the Sky Bet League One table. They have made one change from their 4-1 loss to Barnsley as Anthony Hartigan comes in for loanee Steven Seddon.

Barton has made one change to the side that started against Rochdale on Saturday with Ched Evans coming in for the suspended Lewie Coyle. Ash Hunter made his 150th appearance for the Cod Army in the game against The Dale but is on the bench tonight.​

Fleetwood Town put in an excellent performance as they beat AFC Wimbledon 3-0 on Tuesday night in South-West London.

Ched Evans – who returned to action following suspension – scored two first half goals for Town in what was a fairly quiet opening 45 minutes for either side, but it was Joey Barton’s side who kept opening half performances going.

In the second period, substitute Ash Hunter scored with only a few minutes to go and this result saw the away side continue their unbeaten league run in 2019.

It was an even start to the game on a frosty evening at Kingsmeadow, with both Wimbledon and Fleetwood looking to zip the ball around on the snowy pitch.

The first corner of the match fell to the home side, Andy Barcham whipped in the ball at the near post, it was met by Deji Oshilaja but the tall centre back failed to make the connection he needed to test Alex Cairns in the Fleetwood goal.

Evans got the opening goal of the match from close range after Ross Wallace’s long range effort beat Ramsdale and rebounded off the inside of the post.

It was nearly two goals for Barton’s side within the space of five minutes. Burns did well down the right to get past Oshilaja, and when he crossed the ball, the Dons defender Terell Thomas went to clear the ball away, only to hit his defensive partner on the back, and rebound to the keeper. A lucky break for the hosts.

Ched made it two goals to the good after half an hour and once again, it was another tap in. James Wallace set up the move by switching it to Burns, and his low cross to Madden saw his shot saved by Ramsdale, but the parry only fell to Ched, who did what he did best and was never going to miss from close range.

Wimbledon reacted to the goal well and went down the other end from the restart. Joe Pigott – who had recently returned to action – held the ball up with his back towards goal. He managed to turn Craig Morgan one way and get a shot away at goal. Alex Cairns saw it all the way.

Ashley Nadesan had a great chance four minutes before the half-time to kill the game for the Cod Army. It was almost the perfect counter attack as Paddy Madden broke down the left and it was two on one with Oshilaja, and with the pass to Nadesan, the forward couldn’t convert his chance.

Town started off the second half just the way they finished the first and got on the attack from the first whistle. After Nadesan worked it well down the left, he pulled the ball back onto the box but with Thomas failing to clear his lines, it fell nicely to Ross Wallace who struck the ball first time, only to see it deflect narrowly wide for a corner.

Wimbledon kept plugging away and it was substitute Dylan Connolly who made a darting run down the right wing, and with his low driven cross into the box, he was awaiting a forward to gamble, but no on-runner came.

Just like the first half with the Town counter attack, it was replicated in the second and with both Madden and Nadesan running towards goal, Madden decided to use his partner as a decoy, and as his shot fired on goal, Ramsdale was there to prevent the Irishman scoring his 17th of the campaign.

Hunter was introduced into the match with ten minutes to go and it didn’t take the 23-year-old long to get on the scoresheet. Evans could have had his first but was denied by the goalkeeper, but the save only fell to Hunter rose highest to secure the points.

Barton’s men were well organised from the first minute, and with the manner that they went about their work on a freezing cold night in the capital city, it will be a result the whole club will enjoy going into this weekend’s game against Scunthorpe at Highbury.

The Cod Army are unbeaten in the league in 2019, and will be looking to gain revenge over The Dons are their victory in the Emirates FA Cup earlier in the month.

Tickets and coach travel are available to purchase over the phone by calling 01253 775080, or by visiting the club shop at Highbury Stadium. 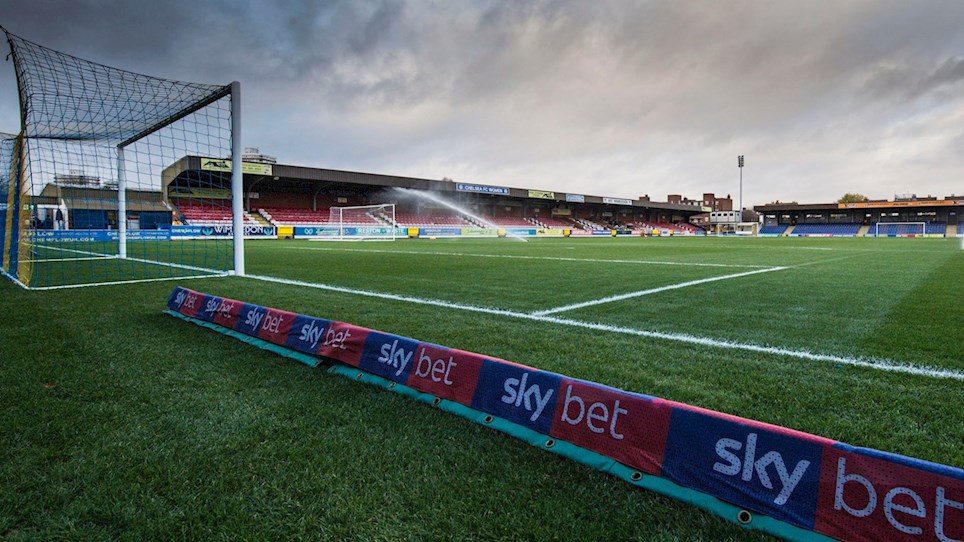 Get your ticket and travel for Town's trip to AFC Wimbledon


Ticket and travel is NOW on sale for Fleetwood Tonw's Sky Bet League One fixture away at AFC Wimbledon at Kingsmeadow.