Joey Barton and his side travel to Scunthorpe United on Wednesday night in Sky Bet League One action, and here is your preview for the match against the Iron.

leetwood suffered late heartbreak on Saturday at home to Rochdale when striker Ian Henderson rattled the netting in stoppage time to give each side a share of the points.

Town sit on four points after three league matches, and are unbeaten from home since the first game of pre-season, and it is a record the coaching staff and players want to keep come late Wednesday evening.

First team coach Clint Hill spoke to the media on Tuesday morning at Poolfoot Farm and knows that the match against Scunthorpe will be a test, however he knows his players have what it takes to bring all three points back to the Fylde Coast. 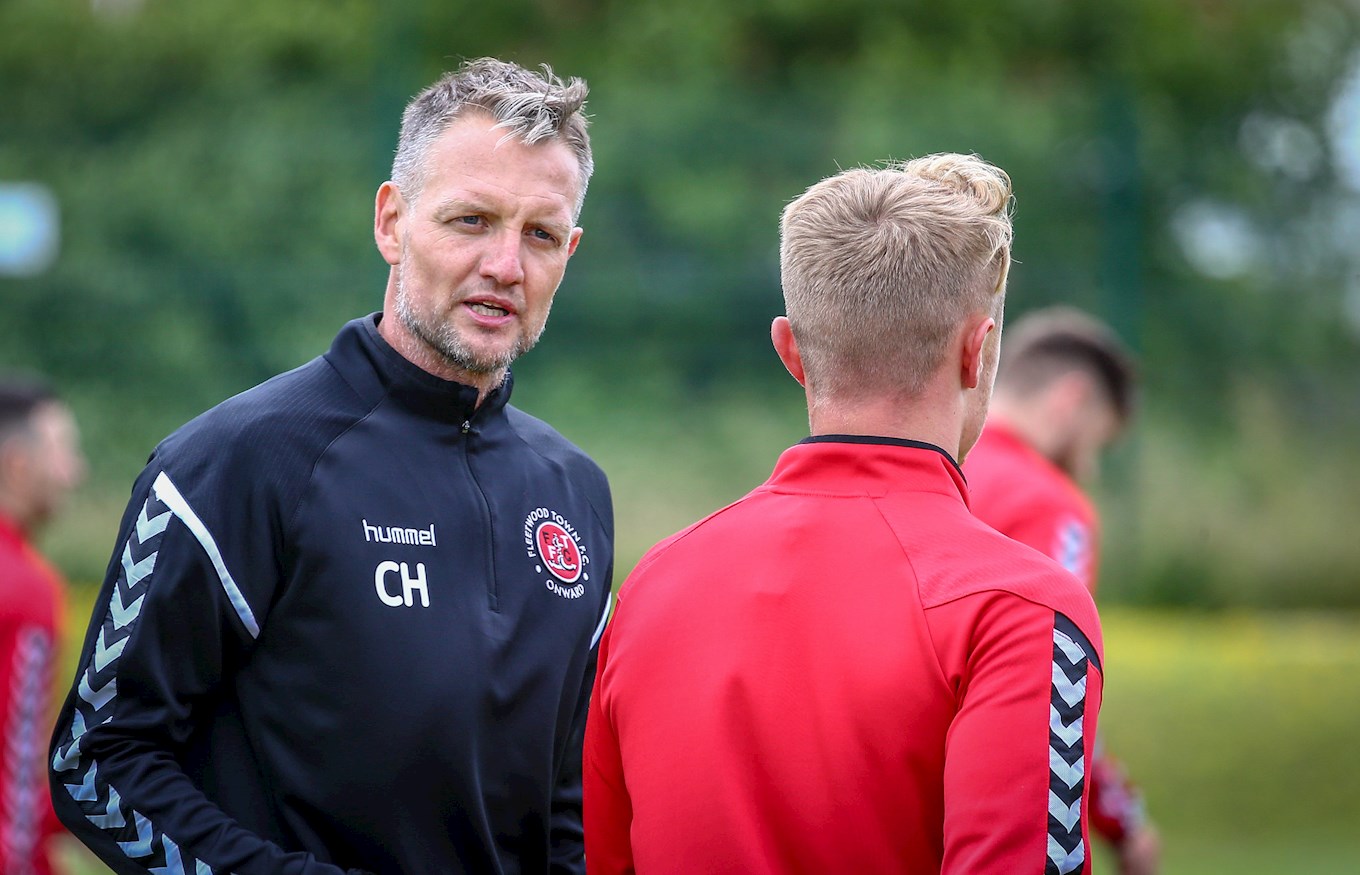 “As in any away game, you know it's going to be a battle and from that you can earn the right to play. It's important that we go there and quiet the home crowd down, and it's fair to say that goes in every league match up and down the country.

"Scunthorpe have had a mix bag of results and I am sure they will want to use this game to turn around their season, and all in all, it looks to be a great game for both teams." 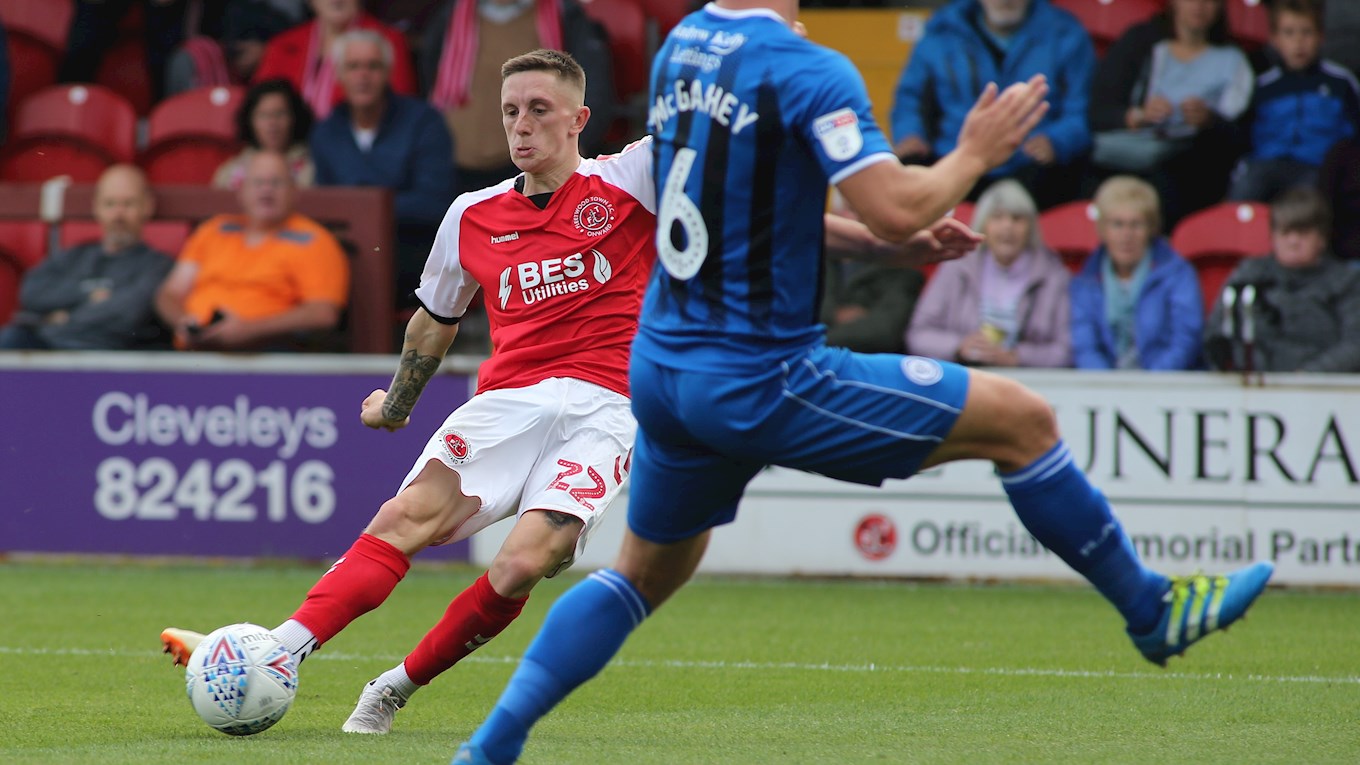 After picking up their first points of the season against Oxford United in the 2-0 victory, Town went on to win in the Caraboa Cup first leg against Crewe – which now sees the club travel to Premier League side Leicester City at the King Power Stadium on Tuesday 28th August.

Saturday saw Town come away from Highbury with only a point. Goals from Paddy Madden and Ched Evans saw the home side lead in injury time, but there was time for Rochdale striker Ian Henderson to spoil the party.

Scunthorpe opened the season with a 2-1 win away at newly promoted side Coventry City. The home side took the lead, however it was goals from Stephen Humphrys and Andy Dale that gave the Iron all three points, and their only win of the season so far.

A 1-1 draw came in their second game against Walsall at home, three days later they suffered defeat in the EFL Cup first round at home to League One side Doncaster Rovers.

Sunderland came out 3-0 winners on Sunday against Nick Daws’ side at the Stadium of Light, and will now be looking to put the record straight when Joey Barton and the Cod Army make their way across the Pennines in midweek. 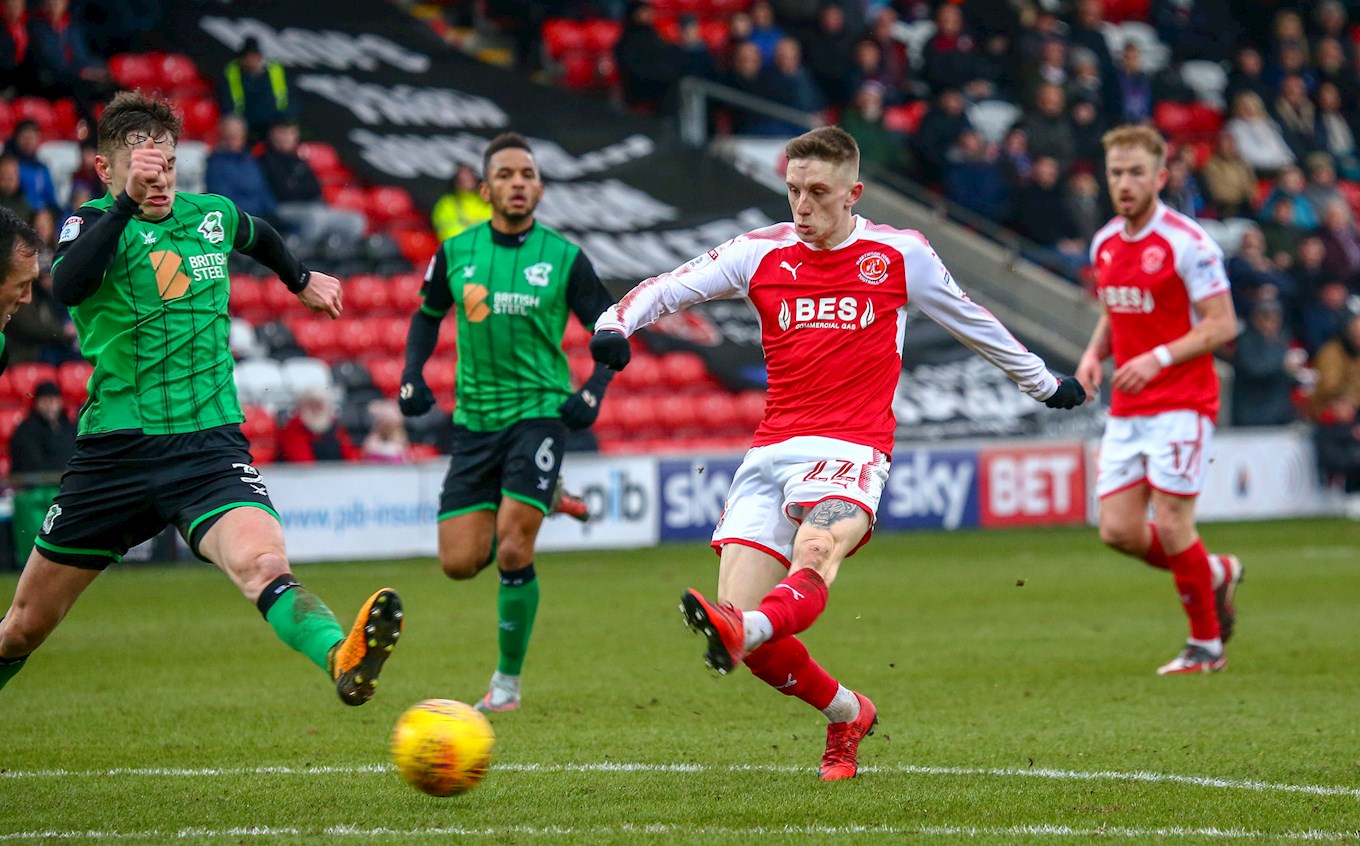 The two sides have met ten times in the Football League, with their first meeting being in the 2013/14 season when both sides were in League Two. Scunthorpe won the game at Highbury 1-0 thanks to a goal from Sam Winnall on the hour mark, with the reverse fixture finishing goalless.

Town’s first win against Scunthorpe came a year later in August 2014. Town were on the road and pick up all three points in the club’s 2-0 victory. Jamie Proctor scored in the 70th minute before Gareth Evans sealed the win 10 minutes later.

Last season saw the two teams share the points in the first match with Jordy Hiwula getting the equaliser five minutes from time, however the second match was a five goal thriller, with The Iron winning 3-2 at Highbury thanks to two goals from Josh Morris, and striker Ivan Toney.

Scunthorpe United’s one to watch is on loan forward Stephen Humphrys. The striker joined the Lincolnshire based side in July 2018 on a season-long loan and already has two goals to his name in the four matches he has played.

Humphrys began his career in the Bury Youth set-up before moving to Fulham’s Academy in 2013. He made his professional debut in the Sky Bet Championship for Fulham against Derby County in December 2017, and was later sent on loan to Shrewsbury Town for the rest of the season.

Rochdale was the 20-year-old’s next club and went on to score two goals in 13 appearances in all competition, however with the London club gaining promotion via the Play-Offs to the Premier League, it was seen as a positive move for the youngster to get more game time elsewhere. 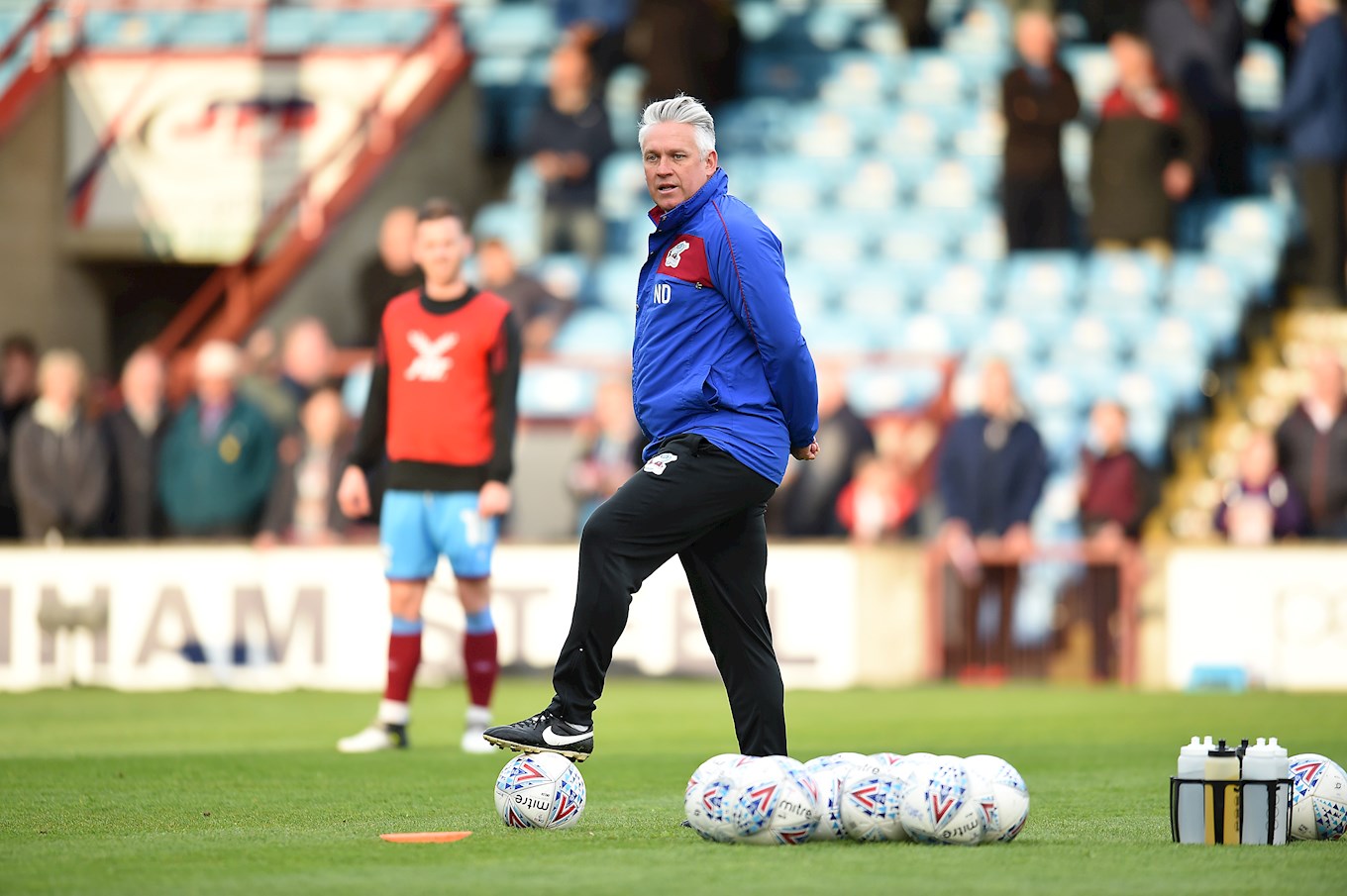 Joey Barton’s side are priced at 21/10 to pick up all three points against Scunthorpe.

For Fleetwood to win and for both teams to score at Glanford Park, you can get boosted odds of 6/1. Can Joey Barton’s men get back to winning ways?

In this fixture last season it finished 1-1 and for a repeat of that score-line, the odds are at 5/1.

Town were 4-0 to the good after just 29 minutes, with Evans scoring two goals in quick succession, before Burns finished two one-on-ones in a matter of minutes to put Town out of sight.

Shortly after half-time, Hunter scored the pick of the goals with a stunning curling effort from outside the box to put Town 5-0 ahead.

Following a frustrating draw at home against Rochdale on Saturday, Barton made two changes to his team, with Burns and new signing James Husband coming into the starting 11, replacing Kyle Dempsey and Gethin Jones.

Scunthorpe were looking to avoid a third straight defeat in all competitions, and made four changes to the side that suffered a 3-0 defeat at Sunderland on Sunday.

The two sides went into the game at Glanford Park with equal records in League One, both with a single win, draw and defeat in their first three outings, but Town were by far the more dominant side on the night.

In just the seventh minute, the Irons were lucky to still have 11 men on the pitch when striker Josh Morris floored Husband with a scathing two-footed tackle from behind, but referee Carl Boyeson deemed it worthy of just a yellow card.

Fleetwood had the best of the early chances when Madden, who was facing his former club, played it into Ashley Hunter on the left, and his right-footed strike from the edge of the box was almost converted into his own net by Cameron Burgess, with his attempted clearance hitting the crossbar.

Fleetwood’s early dominance paid off when they took the lead in the 16th minute. Burns burst forward down the right wing, and his low cross was pulled back to Hunter, whose effort was well saved by Rory Watson, but Evans was on hand to convert the rebound, scoring for the third game in a row.

Just a minute later, Town doubled their lead, and it was that man Evans again. Hunter picked the ball up on the right, and delivered a brilliant cross to Evans at the back post, who headed in from close range to double the Cod Army’s advantage.

In the 21st minute, Town added a third with some devastating attacking play that was too much for the Scunthorpe back four. Evans flicked the ball through to Burns, who used his lightening pace to evade Burgess and Cameron Borthwick-Jackson, before showing great composure to delicately chip the ball over Watson and into the corner of the net.

Scunthorpe had their first clear-cut chance of the match in the 26th minute when George Thomas threaded a clever through ball into Andy Dales, who had just Alex Cairns to beat, but his effort was well saved by the Town stopper.

Fleetwood were in dreamland when they made it 4-0 after just 29 minutes. Madden picked the ball up on the left, his inside pass to Burns saw him clean through on goal, and he clinically finished into the left corner to score his second and Town’s fourth with less than half an hour played.

Scunthorpe almost pulled one back when Morris found space on the left wing, his drilled low cross deflected off Lewie Coyle and almost into the near corner, but a stunning last-ditch save from Cairns stopped the ball on the goal line.

The half-time whistle was met with a chorus of boos from the home crowd, but manager Barton would’ve been delighted with his side’s ruthless first half performance.

Fleetwood continued their dominance in the second half, and it paid off when they scored a fifth goal in the 56th minute. Evans picked the ball up 20 yards from goal, before Funso Ojo fouled him with a reckless tackle. The referee played a good advantage, and after picking up the ball outside the area on the left, Hunter curled in an inch-perfect effort into the top right corner.

Midfielder Jason Holt almost scored a sixth for Town when short corner found the Rangers loanee in the area, but his effort was bent just past the far post.

Burns was then close to finding his hat-trick in the 65th minute, but his dipping volley from just outside the box went wide.

Scunthorpe looked for a consolation goal through substitute Ryan Colcough, but after cutting in from the right, he dragged his effort well wide of Cairns’ near post.

The referee blew for full-time as Town sealed an emphatic 5-0 victory, their biggest ever football league win, eclipsing the 5-1 home win over Swindon in November 2015.

It was ultimately a night to forget for the home side, but for Fleetwood and Barton, it was a night to remember.

There is extremely limited places available on the official coach travel for Fleetwood Town's trip to Scunthorpe United on Wednesday.

There are limited spaces available on the coach travel on Wednesday, when supporters will be leaving Highbury Stadium at 3:30pm ahead of the 7:45pm kick-off at Glanford Park.

Travel cost is set at £13 for all age brackets, and once at the ground, away supporters will be based in the Clugston Stand.

The ticket prices for the match are as follows:

Please note the prices in brackets are if tickets are bought on matchday – we strongly advise purchasing before the match to save money.

With the side picking up four points from their first three league games of the season, the Cod Army will be looking to get back to winning ways at Glanford Park.

We look forward to seeing you at the game!

Buy your tickets and travel at the club shop at Highbury Stadium, or over the phone by calling 01253 775080. 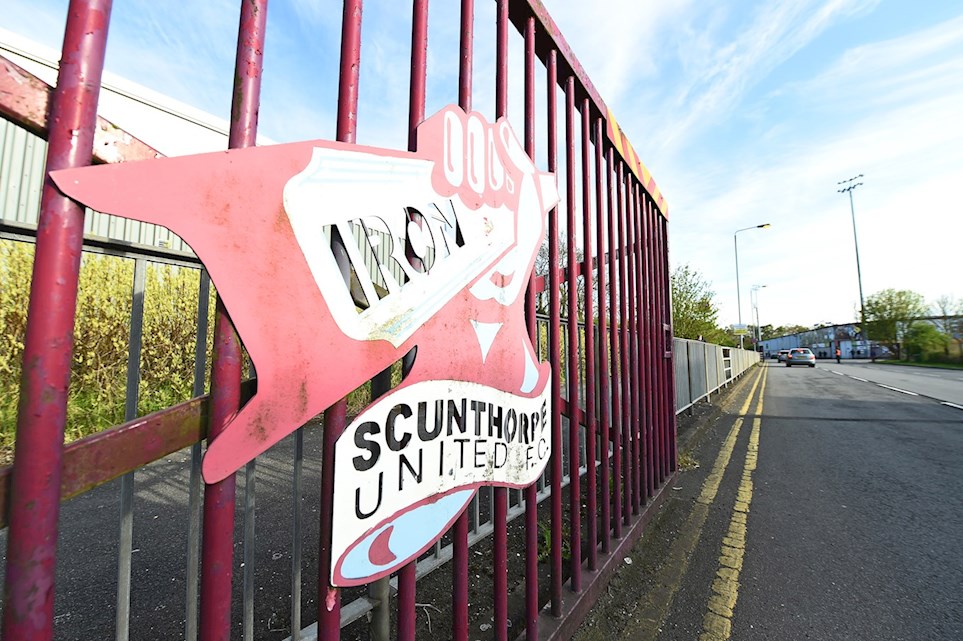 Scunthorpe tickets and travel on sale


Tickets and coach travel for Fleetwood Town’s Sky Bet League One trip to Scunthorpe United are now on sale.