Fleetwood Town are back in action this weekend as they take to the pitch after a week off as they host Oldham Athletic at Highbury stadium on Saturday (3pm).

Fleetwood Town are back in action this weekend as they take to the pitch after a week off as they host Oldham Athletic at Highbury stadium on Saturday (3pm).

While the Cod Army were on their week off, due to their match against Blackburn Rovers being postponed because of international call ups, Oldham were involved in an exciting match at home against Charlton Athletic.

It was a seven-goal thriller at Boundary Park which saw the Addicks win 4-3, even though Oldham drew the game level twice during the contest.

Oldham have endured a tough start to the season and are yet to get off the mark in Sky Bet League One this season after five games.

Their campaign began with a 2-0 defeat to Oxford United, before being narrowly defeated 3-2 by Burton Albion in the Carabao Cup. The Latics were cruelly denied their first point of the season at Walsall a week later as Erhun Oztumer scored a stoppage time winner. Losses to Wigan, Blackpool and Charlton have followed in what has been a difficult opening month for the Greater Manchester outfit.

There could be two players on the pitch on Saturday who could face their former sides. Town midfielder Aiden O’Neill featured 15 times for the Latics earlier this year, whilst on loan from Burnley.

The Cod Army will be familiar with striker Aaron Amadi-Holloway, who signed for Town in May 2016. He scored his first goal for the club early on in the first round of the EFL Cup defeat to Leeds United last summer. The Welshman now plays at Boundary Park having previously spent time there on loan before his spell with Fleetwood.

Fleetwood and Oldham have met seven times in all competitions, and it is the Latics who have the superior record, winning five of those contests to Fleetwood’s one.

It was on New Year’s Eve last year when Fleetwood came out on top, thanks to a last minute own goal from Josh Law.

The return fixture at Oldham also featured an own goal as Nathan Pond turned the ball into his own net, with Lee Erwin making it 2-0 to the hosts.

Striker Eoin Doyle is a natural goal scorer and could pose a threat to Uwe Rosler’s side on Saturday. Doyle scored his first Oldham goal, since joining from Preston North End on loan, last weekend in the 4-3 deafeat to Charlton and has a good record in the Football Legaue, notably at Chesterfield where he scored 35 times in 69 appearances for the Spireites two years ago.

Brother of former Fleetwood defender Conor McLaughlin, Ryan McLaughlin is a player much like his older sibling and often presses forward down the wind during attacks. Having started his career with Glenavon in his native Northern Ireland and progressed through the ranks at Liverpool, McLaughlin featured for Barnsley and Aberdeen before signing permanently for Oldham in 2016.

A product of the impressive Manchester City academy, Jack Byrne is an exciting midfielder hailing from Dublin. After a season in the Netherlands on loan at SC Cambuur, and then Blackburn Rovers, Byrne was picked up by Wigan Athletic, signing for the Lancashire side in January 2017. Byrne made his Oldham debut in their Checkatrade Trophy defeat to Port Vale and scored his first goal three days late against Charlton. 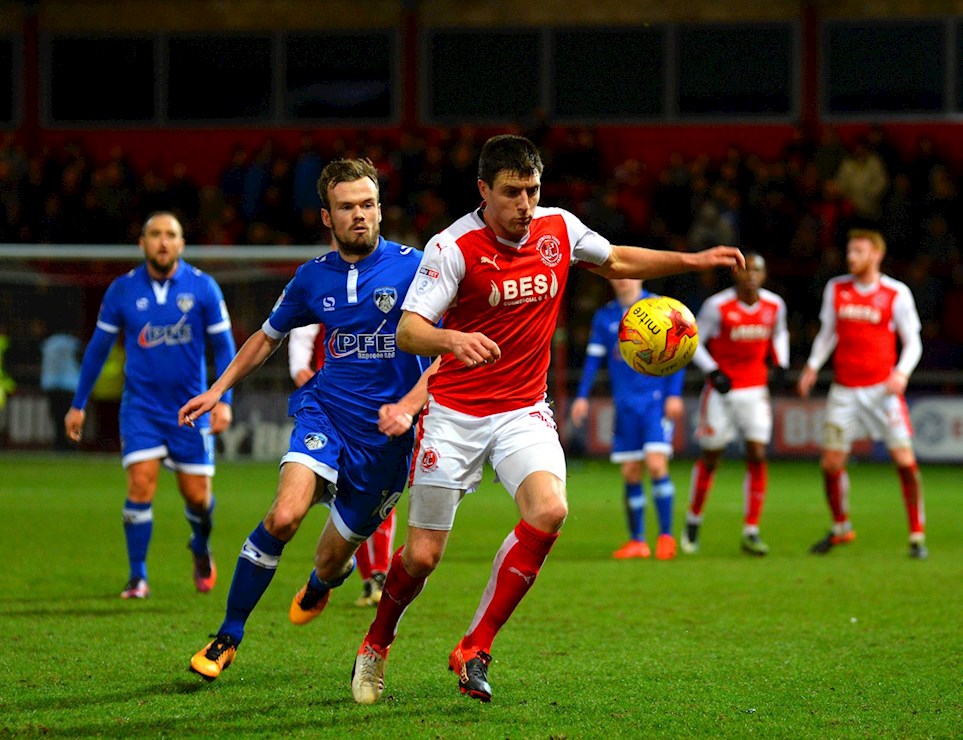 
Fancy a bet ahead of Fleetwood Town’s game against Oldham Athletic this Saturday? See the latest odds with our EFL partner Sky Bet. 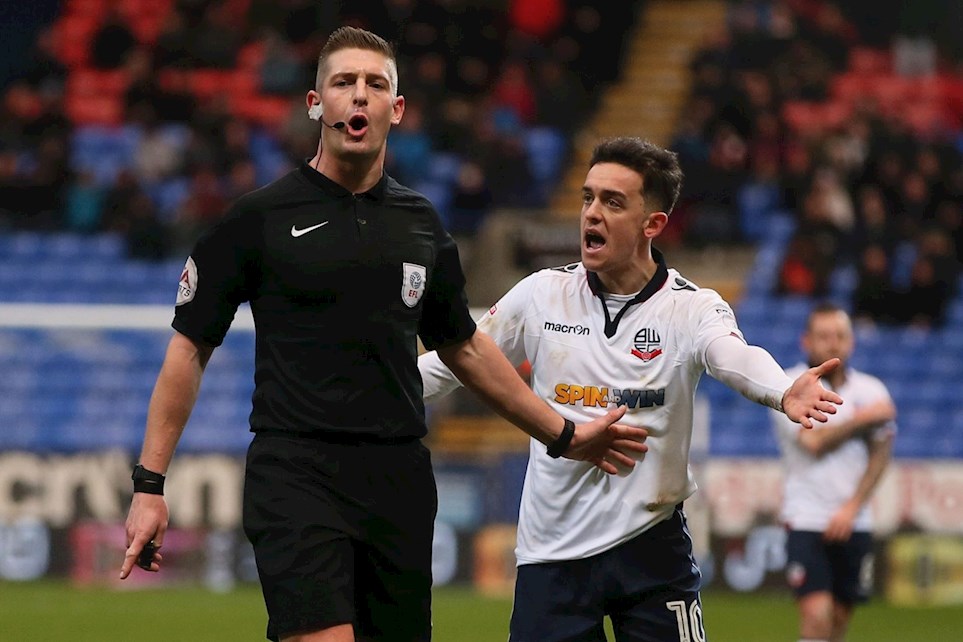 
The match officials for Saturday’s game against Oldham Athletic have been announced.

A stoppage time penalty from substitute Ashley Hunter rescued a point in dramatic fashion for Fleetwood Town as they drew 2-2 with Oldham Athletic.

Goals from Craig Davies and Kean Bryan either side of an Ashley Eastham equaliser looked to have sealed three points for the Latics, but Hunter sent Oldham stopper Jack Ruddy the wrong way in the 93rd minute and send Highbury into raptures.

Uwe Rosler made one change from the side that was defeated at Bristol Rovers two weeks ago, with Bailly Cargill replacing Nathan Pond in defence. Cian Bolger captained the side.

The opening stages of the contest saw little action at either end as both sides did well to cancel each other out. Fleetwood were the better side though and were breaking well. Bobby Grant’s deflected a Kyle Dempsey effort wide in the first chance for the home side, moments after Anthony Gerrard headed wide for the visitors from a Byrne corner.

As the game opened up and the midfield opened up, it was to be Oldham who broke the deadlock. An impressive run down the right from Eoin Doyle resulted in the Latics’ striker looping a pinpoint cross towards Craig Davies, whose bullet header beat Alex Cairns.

Despite the setback, Town were looking lively. A smart corner routine from Dempsey saw him thread the ball to Amari’i Bell, but the defender could only blaze his effort over the bar.

An equaliser was to come just six minutes later as Eastham headed in the far post. After Oldham failed to clear their lines after a Dempsey free kick, the ball was headed across the box by Cargill and Eastham was there to find the back of the net. After the initial quiet start, the game was now end to end as Doyle fired over from the restart.

The deflection of a defender and perhaps the touch of Ruddy’s hand prevented Town from taking the lead just a minute later. Lewie Coyle produced a piercing run into the Oldham area and fired across goal, but the ball couldn’t find a way into the net.

The game was still relentless as the half edged towards a close, and Town were unlucky not to be ahead at the break. A fine ball over to Devante Cole was nicely controlled by the striker, but he fired wide under pressure from Ruddy in the Oldham goal.

The second period began with same tenacity of the first with chances coming at both ends. Cole again came closest to scoring the third goal of match as he fired over after a cheeky pass by Aiden O’Neill. Cargill then headed over from a corner.

It was to be Oldham who scored the next goal though, with their first chance of the half, and in emphatic style. After a clearance from Bolger only reached Bryan on the edge of the area, the Manchester City loanee struck first time and fired into the top corner from 25 yards out.

The visitors were now in the ascendency, and were looking threatening from set pieces. Cairns did well to gather from a smart Byrne free kick from the left. They perhaps should have made it 3-1 after a break away move saw former Cod Aaron Amadi-Holloway fire just wide of the mark.

Up the other end, Hunter’s effort sailed agonisingly past the upright after being fed through by Coyle. The visitors then missed another golden chance with Gerrard’s bullet header, before Holloway headed over Byrne’s corner.

With the game in its final ebbs, Fleetwood were desperately searching for an equaliser, and were unlucky when Dempsey’s cross into the box couldn’t find a red shirt.

Hope for Town came in the third minute of stoppage time as Peter Clarke brought down Cole in the area and the referee pointed to the stop. Substitute Hunter coolly slotted past Ruddy and seal a point for the home side.

A late rally did make things exciting in the final seconds, but both sides had to settle for a point as the final whistle blew.


Fancy a bet ahead of Fleetwood Town’s game against Oldham Athletic this Saturday? See the latest odds with our EFL partner Sky Bet.


The match officials for Saturday’s game against Oldham Athletic have been announced.

Fleetwood Town are encouraging fans to get behind Uwe Rosler’s men for two upcoming North-West derbies, with a fantastic ticket offer!

Fans can now take advantage of our ‘buy one, get one half price’ offer for our home games with Oldham (Saturday 9th September) and Bury (Tuesday 12th September).

The offer means if you a ticket for the Oldham match, you get the same ticket for Bury match at half price!

The offer is applicable to both members and non-members, and can be purchased now.

Steve Metcalf, Ticket Office and Retail Manager, said: “This is a great offer for all supporters to come and see two huge North-West derbies against Oldham and Bury.

“We are hoping to attract new fans to Highbury, as well as existing supporters who we know will want to take advantage of this value for money deal.”

Tickets can be purchased from the ticket office at Highbury Stadium, over the phone by calling 01253 775080, or online here.