Fleetwood will look for three straight wins for the first time since August when they travel to Wimbledon on Good Friday.

Wimbledon lost 1-0 to top of the table Shrewsbury on Saturday, despite the league leaders being reduced to ten men.

With three points separating the two clubs, it could prove crucial to the League One relegation fight. 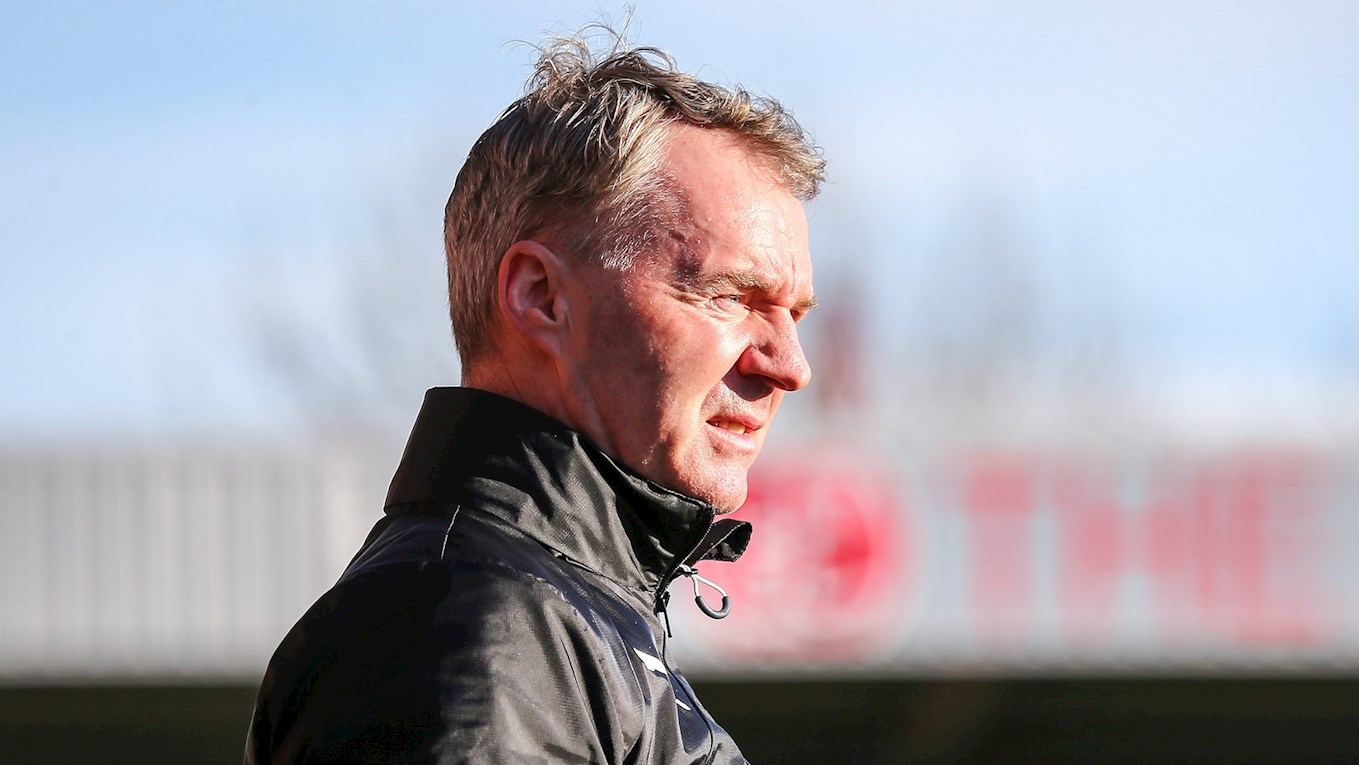 “They are a team in and around us. I know Neal Ardley and his assistant well and it’ll be a very tough game.

“They’re they home side, they’ll be expecting to win the game.

“They’ll know the importance of trying to win the game so I’m expecting a really tough game, but at the same time we’re going there to try and pick three points up and that’s our main objective.” 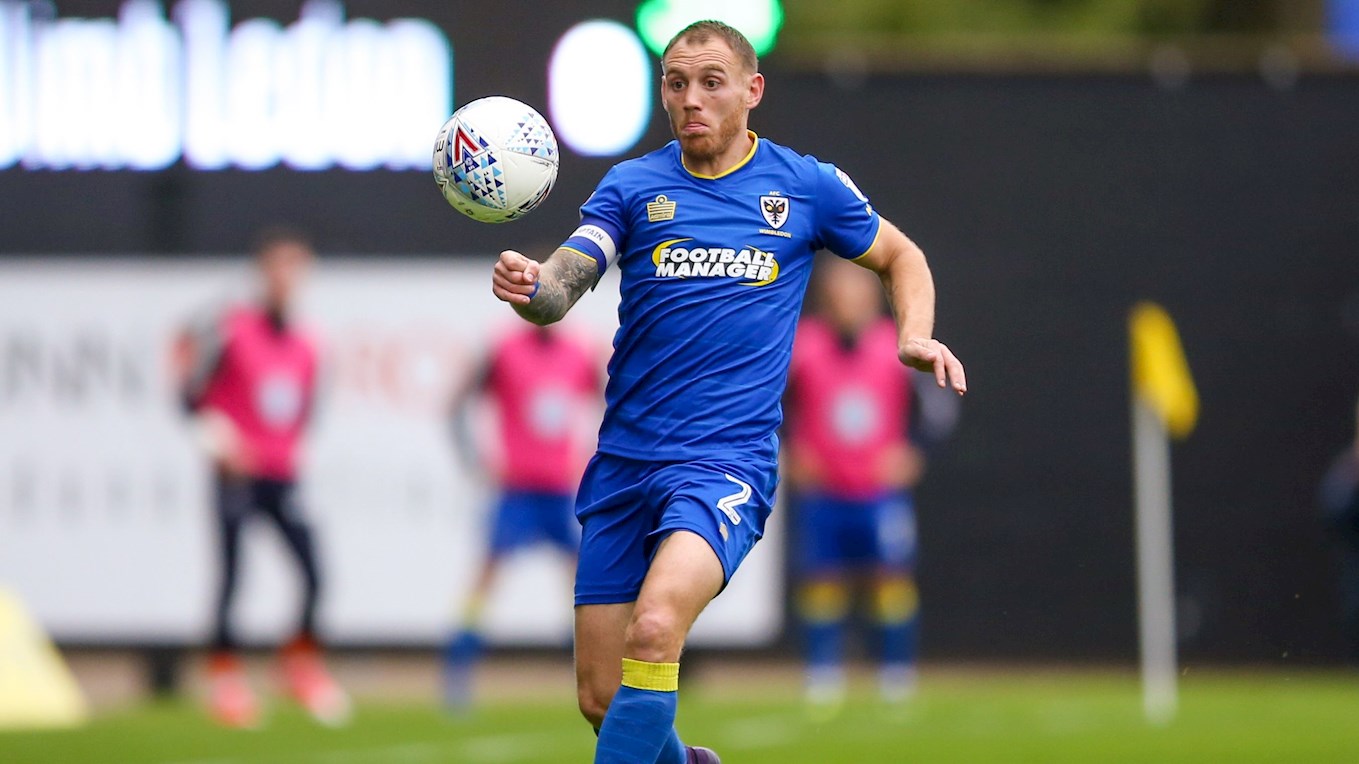 “We can draw encouragement from recent home games.

“We should always feel that we are a match for anyone at home with the atmosphere around the ground.

“Our fans always get behind us and I’m sure that will be the same on Friday.

“It’s a nice, tight pitch, that we are used to playing on and we get after teams.”

Wimbledon have struggled for consistency recently with two wins in their last 10 league games.

The Dons sit 19th in the table, two points above the drop zone. 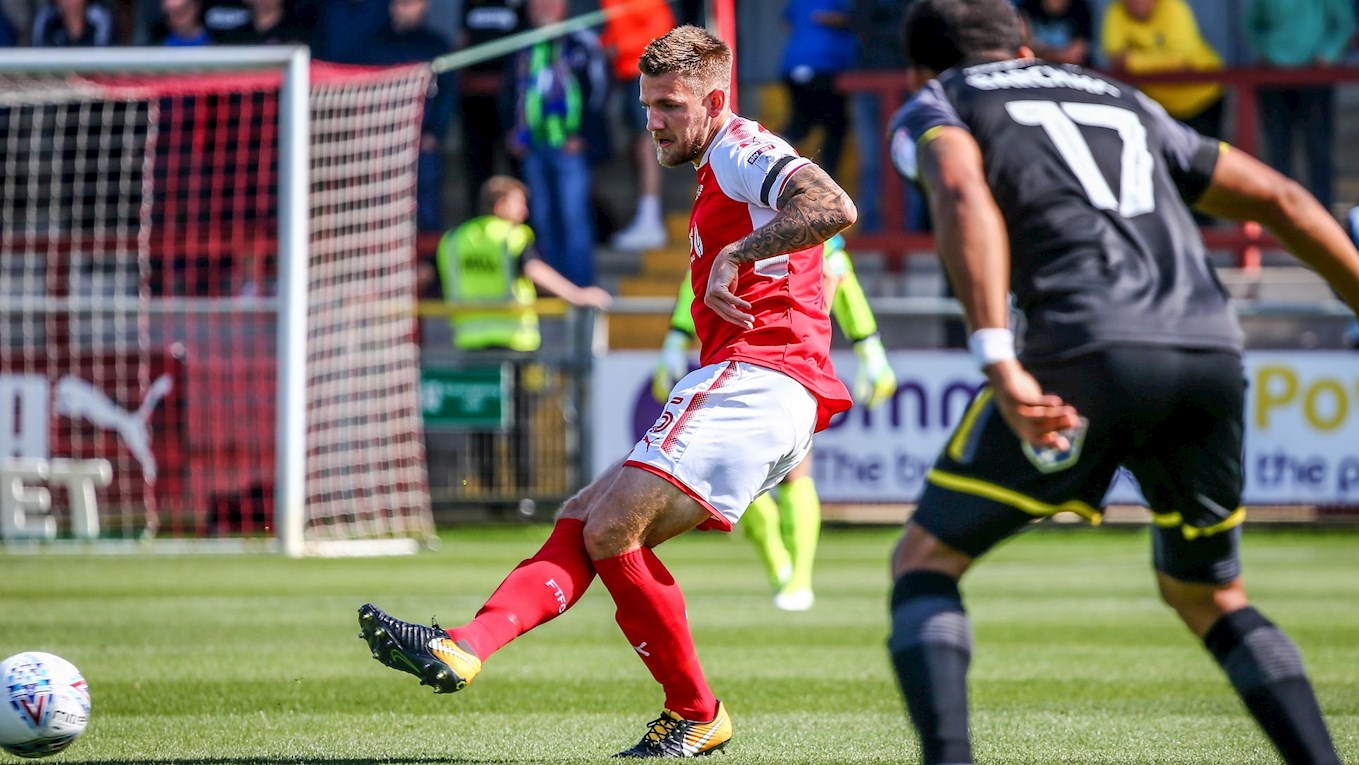 Fleetwood have met Wimbledon on seven occasions, four in League Two and three in League One.

All the meetings have come in the last 6 years, with the first coming in October 2012 in League Two that ended in a 1-1 draw.

The corresponding fixture this season ended in Fleetwood’s first and only victory against Wimbledon with two Devante Cole strikes separating the sides in a 2-0 win.

Wimbledon edge the head to head, with two wins and the rest all ending level. 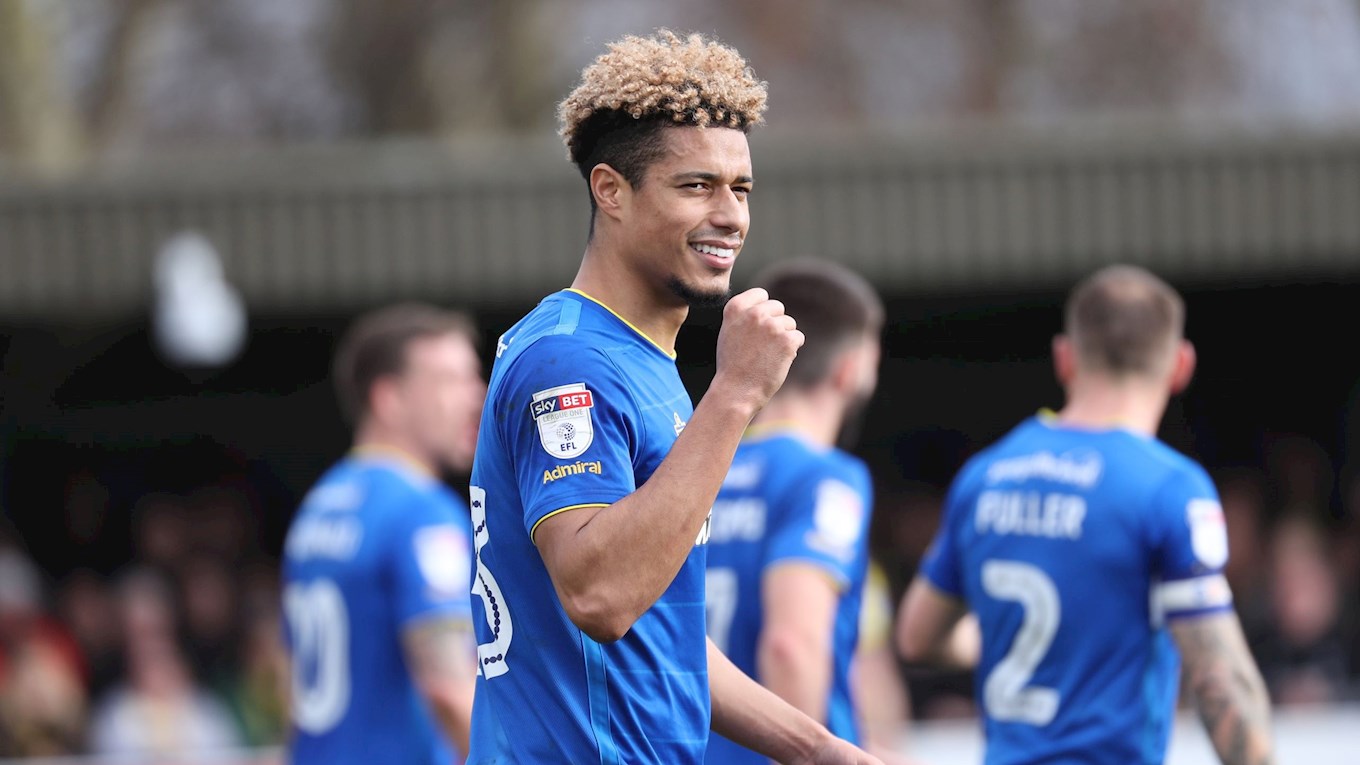 Lyle Taylor is Wimbledon’s top scorer this season, with 12 goals in 36 appearances.

Starting his career in Millwall, the striker made an impression on loan at Concord Rangers with 34 goals in 42 games.

The London-born forward continued his career at Bournemouth when the side were in League One in 2010, before moving north of the border to Falkirk where he scored 24 in 34 games.

Taylor then endured two very similar seasons, spending the first half of the 2013-14 season at Sheffield United and the second half at Partick Thistle.

The forward then joined Scunthorpe in 2014 and spent the second half of the campaign again at Partick scoring 15 goals for the three clubs over the two seasons.

The Montserrat international has spent the last three seasons at AFC Wimbledon and has scored double figures in the league in each of his three campaigns.

Despite excellent recent form, John Sheridan’s side are slight underdogs at 23/10 to win at the Cherry Red Records Stadium, while a draw is 21/10. A home win for AFC Wimbledon is listed as 13/10.

The last time the teams clashed was back in August, when Fleetwood maintained their 100% start to the league season with a Devante Cole brace and a 2-0 win.

For the Cod Army to do the same this time around would give odds of 14/1.

But, for AFC Wimbledon to get revenge and win 2-0 themselves, there are odds of 17/2. 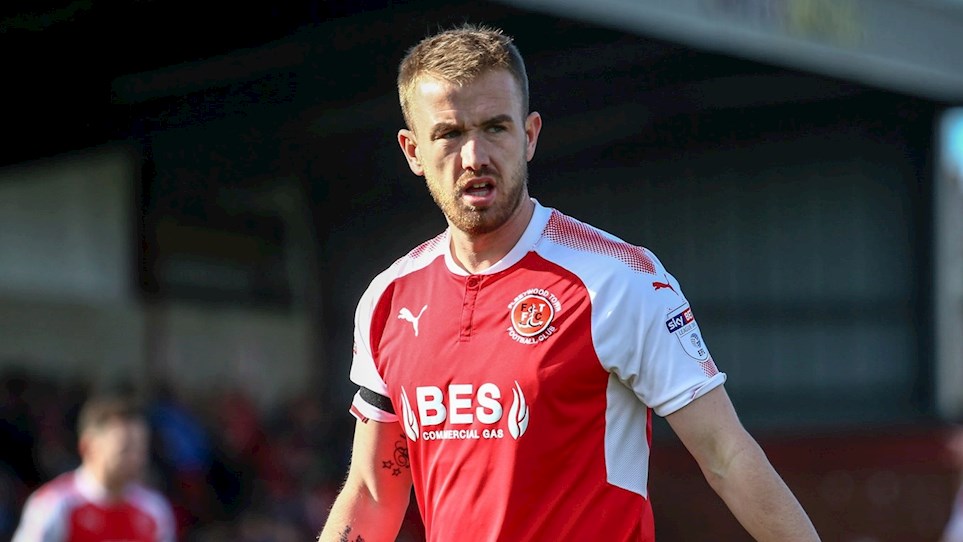 
John Sheridan has named his side to face AFC Wimbledon at the Cherry Red Records Stadium this afternoon.


Fleetwood Town's trip to AFC Wimbledon has been rescheduled.

A goal from Jack Sowerby ensured Fleetwood Town made three consecutive league wins, as they took a step closer to survival with a 1-0 win over AFC Wimbledon at Kingsmeadow on Saturday.

In a chaotic game which was played in awful conditions, Sowerby showed great strength to beat off his marker and scored the decisive winner after 21 minutes.

Torrential rain saw the referee halt the match in the second half to allow the pitch to be cleared of standing water before play could continue, but that didn’t hinder Town, who held on for another win, and a fourth clean sheet on the bounce.

John Sheridan named an unchanged side to the one that beat Northampton Town 2-0 at Highbury last Saturday, with Nathan Pond retaining his spot as captain at the heart of the defence.

AFC Wimbledon adapted to the boggy surface well early on and played some neat passing play inside the Fleetwood half. Lyle Taylor forced his way into the Town area, with a huge deflection from Harry Forrester’s strike hitting him and forcing a wrong-footed Alex Cairns into a difficult catch.

Ash Hunter had Fleetwood’s first effort as he forced a diving save from George Long in the Dons’ goal with a thunderous effort.

Town produced some wonderful play to set up another good chance, which saw Toumani Diagouraga lay the ball of Sowerby, who then struck just wide with a curling 25 yard effort.

That was a sign of things to come, as Fleetwood took a deserved lead through Sowerby. Good strength from Sowerby saw him battle away the tussling defender inside the Wimbledon penalty area, after a through ball from Conor McAleny, and fire past Long with a brilliant finish.

Wimbledon reacted well to going a goal down, and could have equalised had Egli Kaja’s low drive been a few inches to the right, but thankfully for a diving Cairns, the ball skimmed wide.

The hosts then missed a golden chance when Taylor was left unmarked from a free kick, allowing him to acrobatic fire towards goal. Luckily for Fleetwood, he had his angles all wrong.

Paddy Madden was causing problems for the Dons’ defence, and rose highest from a Hunter cross. The offside flag would have denied Madden had his header been on target, but it was just over. Still, the attacking intent was there.

With the rain continuing to pour in London, the second half started with the grey cloud still lingering above Kingsmeadow. A goalmouth scramble had Fleetwood under pressure inside the first few minutes of the half, but Town coped well and were able to break.

Dempsey drove forward, but his cross was heavy for the three Fleetwood players on the attack, and it went out of play. Hunter then whipped a free kick into the area, allowing Cian Bolger to leap above the rest, but he nodded wide

A large puddle that had formed in the middle of the Fleetwood half was wreaking havoc for both sides, with Taylor the lucky recipient of the stray ball, that allowed him to go through one on one with Cairns, A last ditch challenge from Pond saved the day for Town.

Cairns then produced one of his trademark wonder saves to deny Taylor inside the area, as the Wombles piled on the pressure.

Liam Trotter then unleashed a pile driver from around 35 yards out, which flew narrowly over.

The referee stopped play midway through the second half, summoning an army of ground staff onto the pitch to help drain the standing water away. After a small stoppage, play resumed with a slight improvement on the surface.

Wimbledon continued their pressure after the stoppage, with Dean Parrett forcing another save from Cairns.

Against the run of play, Fleetwood were able to break as Bobby Grant held up the ball well in midfield before it found its way to Hunter just outside the area. He was able to turn in the box, but his shot was well stopped by Long.

Town were made to hang on as the game ebbed into five minutes of stoppage time, with the hosts throwing everything they had at Sheridan’s side.

Fleetwood were able to deal with the pressure though, and held off the Dons through the additional time to ensure Sheridan remained unbeaten as head coach.


John Sheridan has named his side to face AFC Wimbledon at the Cherry Red Records Stadium this afternoon.


Fleetwood Town's trip to AFC Wimbledon has been rescheduled.

Fleetwood Town supporters can travel to Friday’s game at AFC Wimbledon for just £15 by booking on the official supporters’ coaches.

Coaches will depart Highbury Stadium at 7:30am, as John Sheridan’s side look to extend their unbeaten run to six matches in Sky Bet League One.

Supporters can book over the phone, by calling 01253 775080 or by visiting the club shop at Highbury Stadium.

Tickets are also available for the match, with prices as follows: 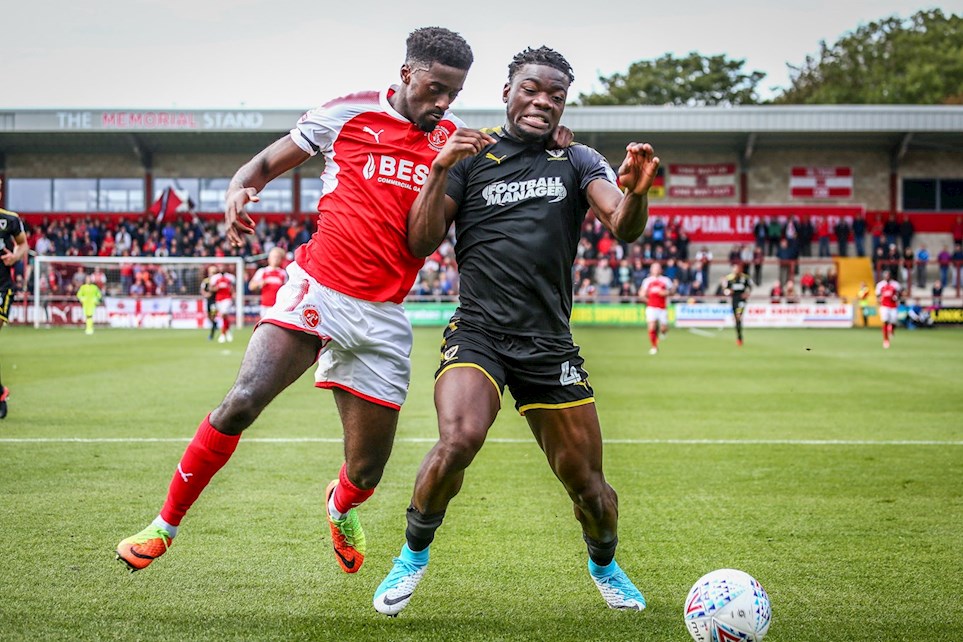 Join us at AFC Wimbledon on Good Friday