Fleetwood Town are back from their training camp in Austria, and they are getting thrown right back into the mix as Bolton Wanderers come up to Highbury Stadium for a pre-season friendly.

Town have had a good start to their pre-season with a 1-0 win over Queen of the South, and a 2-1 win against Czech First League side FK Jablonec in Austria, with full-backs scoring the winning goals in both games.

Bolton have managed to stay unbeaten so far in pre-season, after playing four games. They started off with a 3-2 win against Chorley before heading up to Scotland to face Arbroath and Dundee.

The Trotters headed to the Fylde coast next as they would be set to face AFC Fylde but for the first time in pre-season, they were held to just a draw, with the game finishing 0-0 at Mill Farm.

Town have played three games so far in pre-season and have not picked up a single injury, so Rosler will most likely field a strong side against the Wanderers.

Bolton could be looking to field their goal scorers again at Highbury as Adam Le Fondre, Gary Madine, Josh Vela and youth-player Connor Hall have all grabbed one a piece.

Gateshead-born, Gary Madine started his professional career at Carlisle United in 2007, after coming through the youth ranks at the side, and he managed to get his first goal for the club a year later after coming off the bench against Nottingham Forest, scoring the winner.

The striker spent a lot of time on loan at Carlisle, having spells at Rochdale, Coventry City and Chesterfield. In January 2011, and after 14 goals for Carlisle, he made the move to Sheffield Wednesday.

Madine didn’t take long to get onto the score sheet at Wednesday as he managed to score on his second appearance, which was a 2-2 draw against Yeovil Town at Hillsborough. He finished that season with 18 goals in all competitions.

He won an award the season later as he was awarded the Football League Young Player of the Month of September, after scoring 10 goals in only 12 games. After a few more loan spells, he made his way to Bolton where he has become a strong contender for the first team.

Since joining the club, he has played in 68 games for Bolton, in the league, and has scored 14 goals in that time. 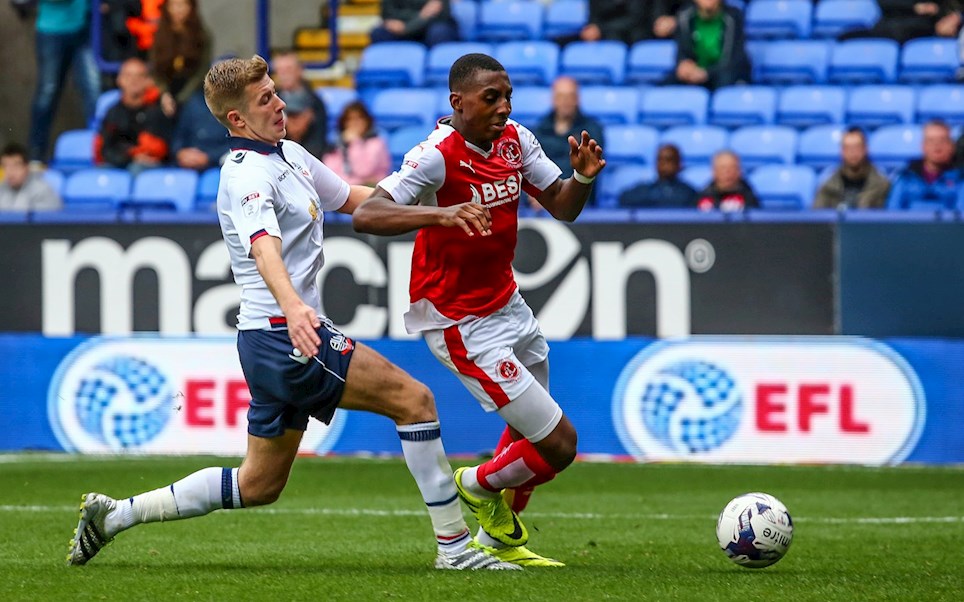 
Head Coach Uwe Rosler has named his side for our pre-season friendly against Bolton Wanderers.

Fleetwood Town returned to Highbury in a fine fashion as they comfortably beat Sky Bet Championship side Bolton Wanderers 2-0.

Two new signings – Jordy Hiwula and Conor McAleny – both opened their accounts for Town with a goal in each half.

Uwe Rosler named four summer signings in his starting 11. Hiwula, McAleny, Kyle Dempsey and Lewie Coyle all were in from the start.

Town started brightly as Coyle broke down the right side and his low cross was just diverted wide by Hiwula, who could have opened the scoring after three minutes.

Both sides cancelled each other out in the opening quarter, before Hiwula got the goal he and Town deserved. Amari’i Bell created room down the left for himself, before whipping in a perfect cross from the former Bradford City striker to head home.

Josh Vela had a shot in anger for the away side, who never got a look-in during the opening stanza.

The second half started in the same way the first did, with Town looking good in possession and Bolton not really threatening.

McAleny gave the Cod Army a taste of what might to be come with a stunning second half strike. Picking the ball up 25 yards out, he curled the ball past Mark Howard and into the top corner to double the lead for Town. A stunning goal.

Town saw out the game well as they continue their preparations for the new season.


Head Coach Uwe Rosler has named his side for our pre-season friendly against Bolton Wanderers.

Fleetwood Town return to Highbury on Saturday for our fourth pre-season friendly ahead of the new Sky Bet League One season.

Phil Parkinson brings his Bolton Wanderers side to the Fylde Coast, and if you have a 2017/18 season ticket, you can watch the game for FREE!

All you need to do if head to the turnstile where you would normally enter the ground with your season ticket, scan it at the reader and you’re in. It’s that simple!

Saturday’s friendly is the designated match to redeem your free ticket, and will not be valid on any other fixture.

Alternatively tickets are available to purchase for the game with the Trotters, by clicking HERE.