Fleetwood return to league action on Saturday as they to high flyers Wigan Athletic, 3pm kick off.

The league leaders come into the game at the DW Stadium two points clear of second place after an impressive season so far. Last time out, they drew with AFC Fylde in the FA Cup second round last Friday.

Fleetwood’s chances are boosted by a 2-0 midweek victory over Chesterfield which saw them march into the next round of the Checkatrade Trophy. 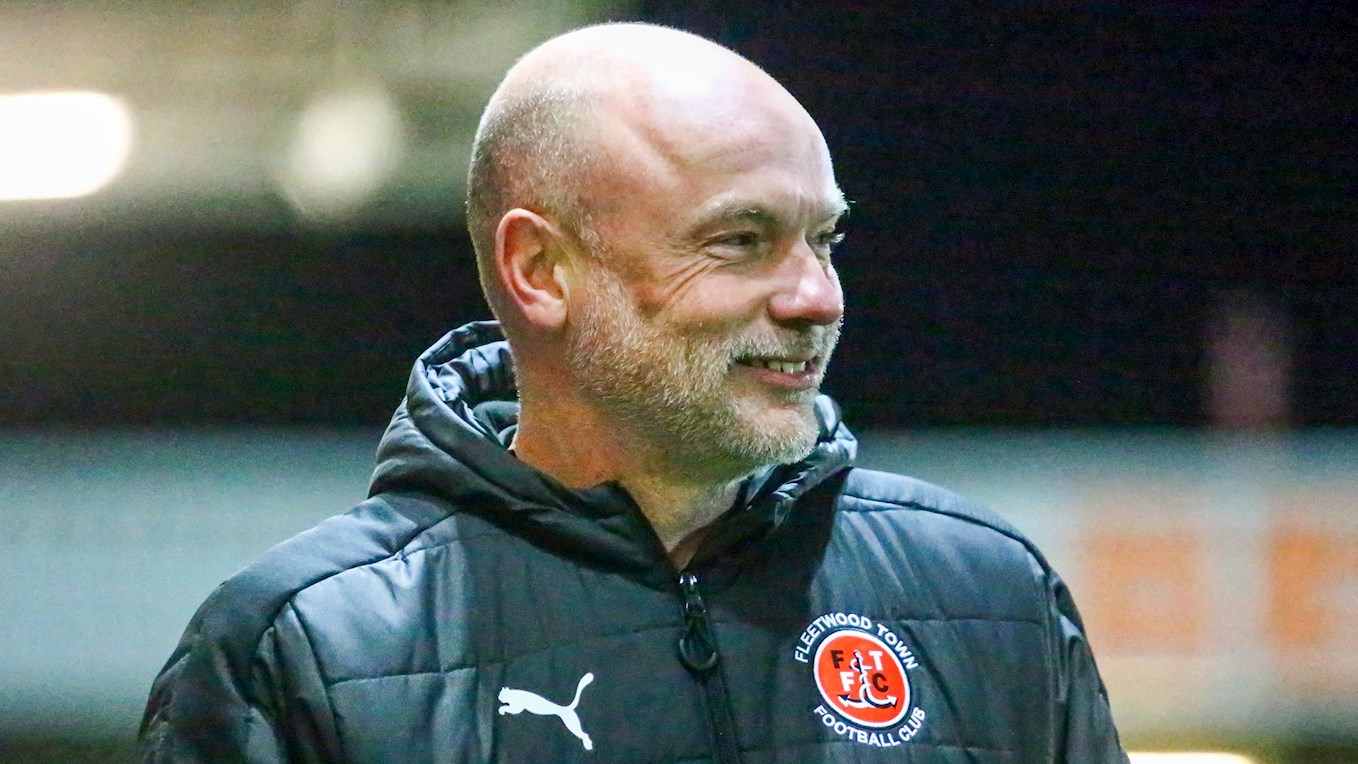 “We’re looking at where we can cause them problems, but I’m very optimistic that we can do that against a good footballing side.

“Paul Cook is the manager now and he has a track record of winning promotion with his sides. He won last season with Portsmouth and is with a club with the best budget.

“They’re going in the right direction and are one of the favourites to get promotion this season.

“People are not giving us a chance of winning tomorrow, but we are always a surprise. It was important to win on Tuesday.”

“Without it being a derby match, it’s a good local game for both sets of supporters, much like when we play Bury, Oldham, Rochdale and teams like that.

“There’s always a special ingredient and with Uwe (Rosler) coming back having formerly managed the club it adds that bit of extra spice to the game. Rob Kelly is there as well who I played with at Wolves and he’s a great lad, so I’m looking forward to the game.

“It’s such a long campaign.  People get high really quickly and low just the same, but the most important thing for us is to keep going. It seems like ages since we played at Rotherham, but we concentrate on Fleetwood first, that’s the main priority and then we can start talking about the cup replay.”

Wigan have lost just once in 10 league games – 2-1 to Bradford City last month, and only been beaten three times in the whole campaign. 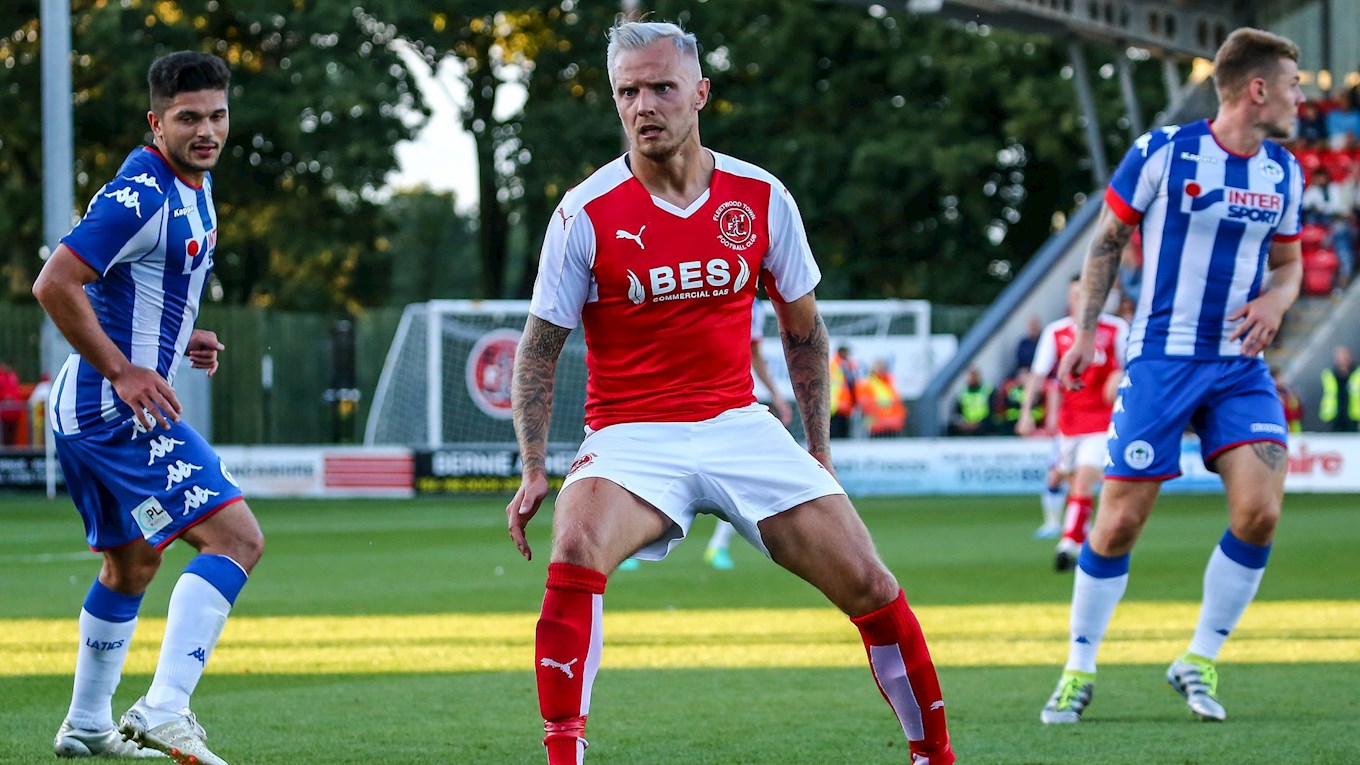 The Latics won both previous meetings between the two sides, which took place in the 14/15 season. The match at the DW Stadium ended 2-1 to the hosts as Michael Jacobs and Jordan Flores scored, before Tyler Hornby-Forbes grabbed a consolation for Town.

It finished 3-1 at Highbury after goals from Andy Kellett, another from Jacobs, and one for current Cod Jordy Hiwula. The two also met in a pre-season friendly in July 2016 which finished 4-3 to the Latics. Despite David Ball’s brace on the day for Town, the side lost out thanks to a Michael Jacobs free-kick from 20-yards 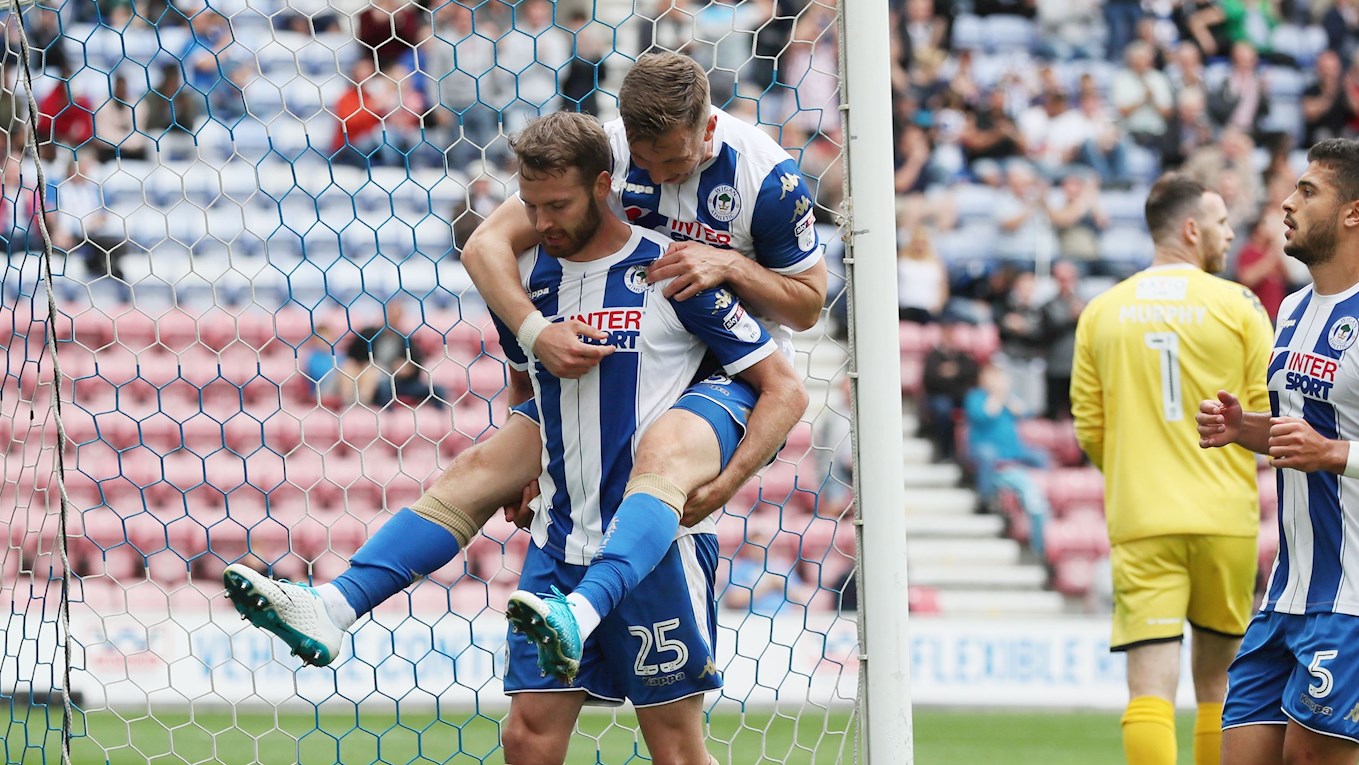 Former Manchester United man Nick Powell is Wigan’s top scorer this season with 7 goals, and is a player Fleetwood should be wary of on Saturday. Powell’s career blossomed with Crewe Alexandra’s academy before making a name for himself at Gresty Road. What followed was the big move to Old Trafford, scoring one goal for the first team – coincidentally against Wigan – before being loaned out to the DW Stadium. Loan spells at Leicester City and Hull City followed before Wigan made his move permanent this summer. 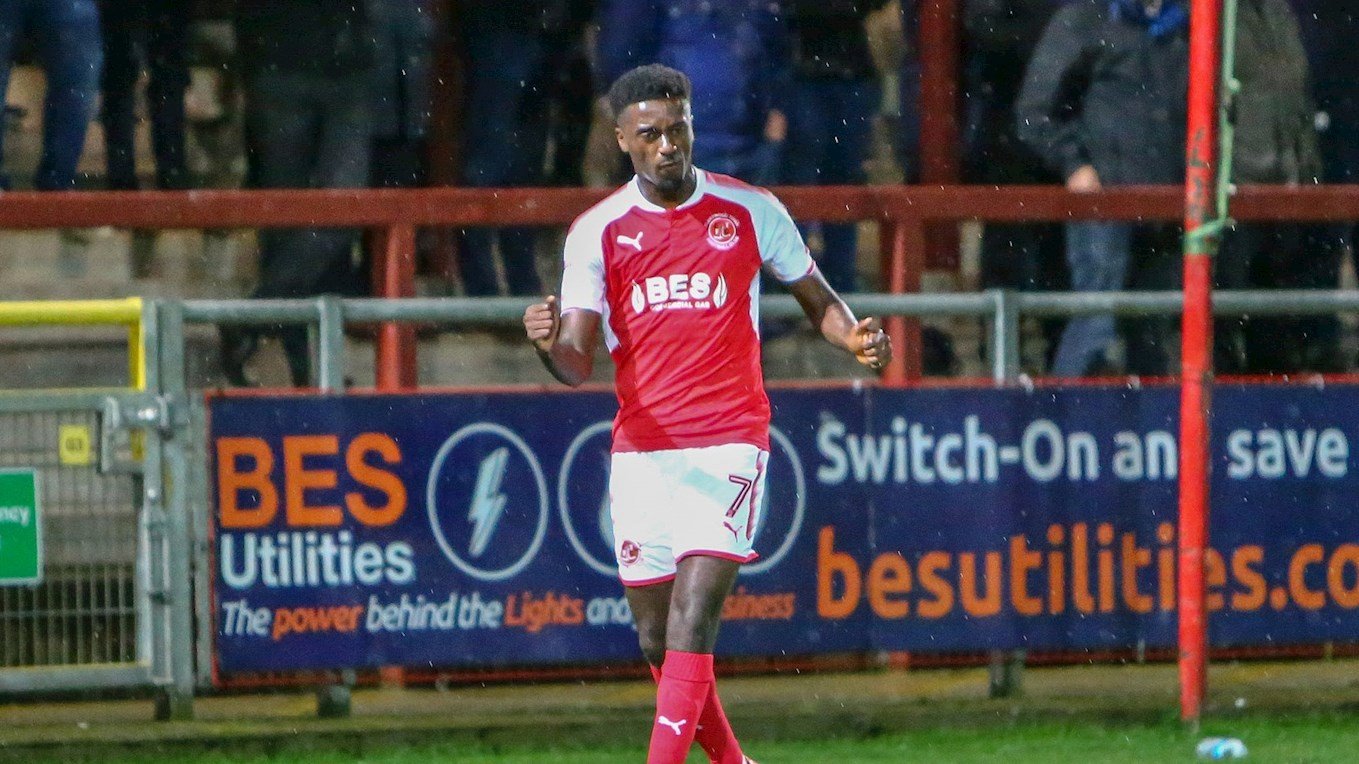 League Partner Sky Bet have released their odds ahead of Saturday’s game. 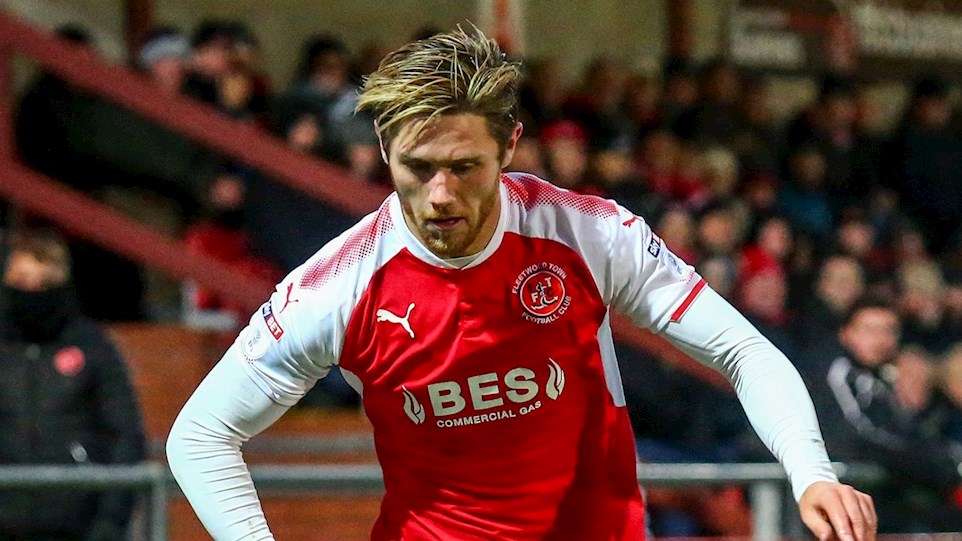 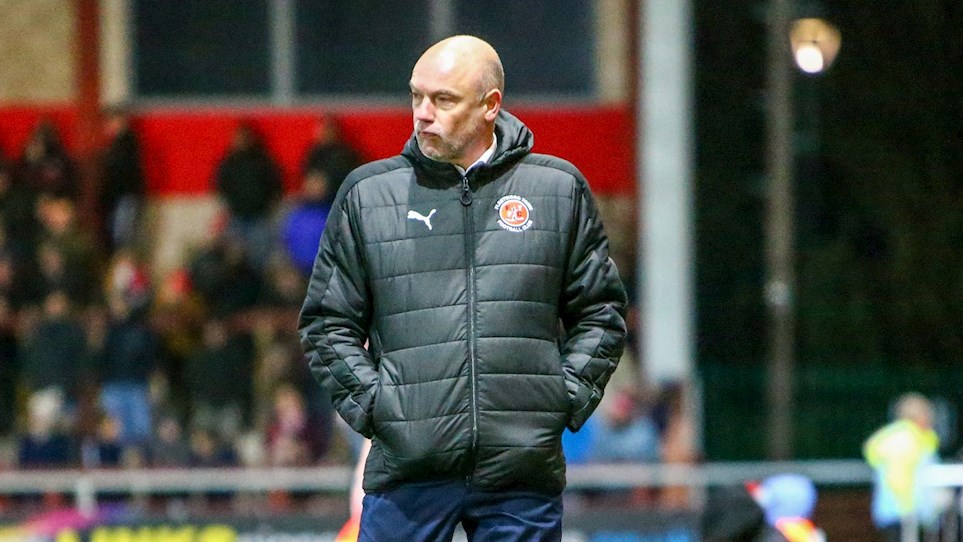 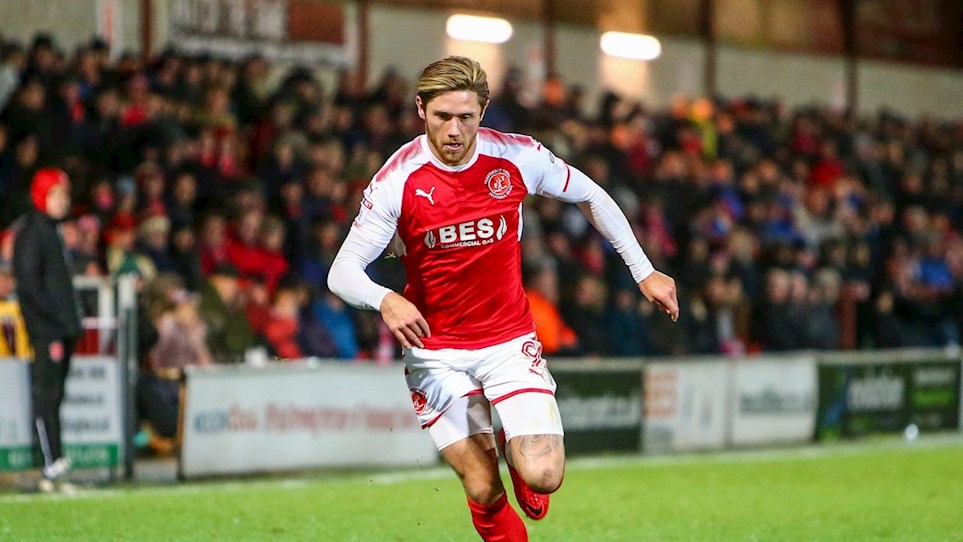 
Fleetwood Town winger Wes Burns says there is excitement in the camp ahead of the weekend’s trip to the DW Stadium. 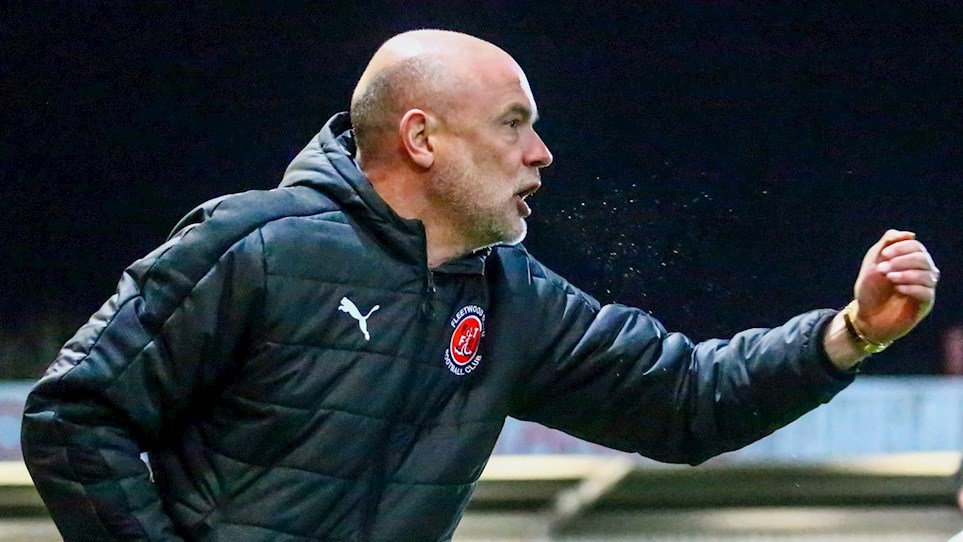 Rosler optimistic ahead of Latics fixture


Uwe Rosler says he is optimistic that his players can get a positive result against Wigan Athletic on Saturday.

Goals from Nick Powell and Dan Burn saw Fleetwood Tow fall to a 2-0 defeat at the hands of Sky Bet League One leaders Wigan Athletic on Saturday.

Two headers in the first half won the game for the Latics, but Fleetwood did improve and could have scored themselves, had it not been for good defending from the home side.

Head coach Uwe Rosler made two changes from the side that played Hereford in the FA Cup last weekend, with Lewie Coyle and Markus Schwabl replacing Wes Burns and Ashley Hunter in the starting line-up.

The league leaders had most of the early possession at the DW Stadium, and took just seven minutes to open the scoring as Powell headed home a cross from Lee Evans from the left-hand side.

Fleetwood reacted well to going a goal down and could have been level almost immediately as Ash Eastham headed a George Glendon corner against the crossbar.

The hosts were dominating the play but Fleetwood were becoming harder to break down in their own area. Kyle Dempsey did well to pounce on a goal-bound shot, as he cleared the ball to safety.

Town found their feet in the game when a good spell of possession led to a nice move in the Wigan half. Jack Sowerby should have perhaps equalised when he was put through on goal. With Devante Cole to his right, Sowerby opted to go it alone and lost possession in the Latics area. A great chance.

Fleetwood were punished for not taking their chances as Wigan doubled their lead with another header. After Dempsey committed a foul just outside the area, Burn jumped highest to connect to the free kick and make it 2-0. It was harsh on Town, who had improved after the first goal.

A cheeky attempted lob from Reece James had potential to put Wigan out of sight, but Alex Cairns dealt with the danger well with a good catch.

Just before the break, Schwabl came to close to pulling one back as a Town corner came to him on the edge of the area, but his shot was over the bar.

The break saw Jordy Hiwula replace Schwabl, and Town came out looking a better side. A good move from the off saw Cole fire just over Christian Walton’s bar from just inside the area.

Having tightened up, Town looked more impressive on the counter but were still searching for a way back into the game, with Rosler bringing on Harrison Biggins for his first ever Football League appearance.

A goalmouth scramble almost saw Wigan make it three but a host of bodies all tried and failed as Town blocked gallantly to usher the ball to safety.

A great save from Cairns then denied substitute Max Power after a pinpoint pass from Powell, before Cian Bolger cleared the danger with a last ditch interception on the rebound.

In stoppage time, Glendon’s corner almost went all the way in, but Walton palmed it away in the last second, before up the other end Cairns was drawn into a good save from Ivan Toney in what was the last action of a disappointing afternoon for the Cod Army.


Fleetwood Town winger Wes Burns says there is excitement in the camp ahead of the weekend’s trip to the DW Stadium.

Rosler optimistic ahead of Latics fixture


Uwe Rosler says he is optimistic that his players can get a positive result against Wigan Athletic on Saturday.

Uwe Rosler's side travel to DW Stadium on Saturday 9th December 2017 (3pm k/o), in what will only be the third ever meeting between the clubs.

The Cod Army have been initially allocated 514 tickets in the North Stand, with tickets priced as follows.

Please note the price in brackets are if tickets are purchased on the day.

Coach travel is also on sale, priced at just £7 for all supporters, with coaches running at both 11:30am and 12:30pm. The 12:30pm coach is a designated family coach, click here to see full details.

Tickets and coach travel can be purchased in person at Highbury Stadium ticket office, or over the phone by calling 01253 775080.

For any further ticketing enquires please contact the ticket office on 01253 775080. 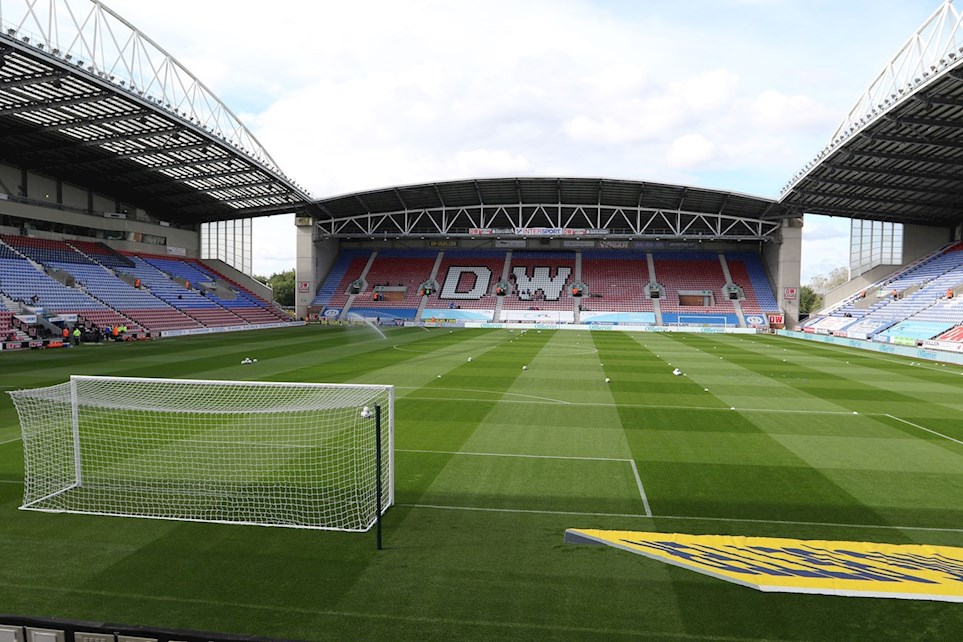 
Tickets and coach travel for Fleetwood Town's trip to Wigan Athletic next month are now on sale.


Tickets for Fleetwood Town's trip to Wigan Athletic will go on sale on Monday 20th November (9am).