The Cod Army take to the road for the first time this season as they visit Sixfields to take on Northampton Town on Saturday (3pm).

Fleetwood will be looking to emulate the performance from their opening day, where Conor McAleny’s brace sealed a 2-0 win over Rotherham United, and bounce back from the midweek cup defeat to Carlisle.

The Cobblers have begun their season with two 1-0 defeats, at Shrewsbury in the league and Queens Park Rangers in the cup, respectively.

A Point To Prove?

With those two early defeats, Northampton will be looking to bounce back and get their season off and running.

Despite a solid season in the league ending with a 16th place finish, the Cobblers did go on a good cup run, reaching the Third Round of the EFL Cup. Having beaten Championship side Barnsley and then Premier League West Bromwich Albion in round one and two, Town were drawn to face Manchester United at Sixfields, eventually losing 3-1.

They’ll be looking to mirror last season’s cup heroics in the league, and improve up their bottom half finish from last term.

Striker Chris Long could face the Cod Army on Saturday. Long spent a season on loan at Town last term, scoring four times in his 18 appearance on loan from Burnley.

Long made his Cobblers debut in Saturday’s defeat at Shrewsbury and also made an appearance at Loftus Road.

Meetings between the two Town’s have been aplenty over the years, and it’s been a fixture favourable for the home team. In the six meetings so far, both sides have won three apiece, all on their home turf, with the one draw coming at Sixfields on the opening day of last season.

The other meeting last season was a 3-0 win for the Cod Army, with goals from Devante Cole, Bobby Grant and David Ball

We also met in 2009 when then non-league Fleetwood were beaten 2-1 in an FA Cup tie. Sean Clancy scored Town’s goal in the First Round tie.

Dean Bowditch signed for the Cobblers in the summer after a six year spell at MK Dons. Having been at stadium:mk since 2011, Bowditch made the switch to Sixfields after his release and signed a two year contract.

Bowditch scored 37 times in just under 200 appearances for the Dons. Despite being a natural midfielder, Bowditch has sometimes been played as a striker and was the top scorer for MK Dons in the 2012/13 season. His Northampton debut came in the defeat at Shrewsbury last Saturday and he also featured in the cup game at QPR.

Another player poached from a few junctions down the M1 is striker Daniel Powell. Powell spent nine years at stadium:mk before the move to Northampton, racking up nearly 50 goals in over 200 appearances. Powell was a key component of the Dons League One promotion season, scoring eight times. Powell has been described as unpredictable, which could be a problem for the Cod Army on Saturday.

Midfield maestro Matt Crooks is another player to take note of ahead of Saturday’s clash. Crooks was tipped by John Coleman to have a bright future in the game, and the former Accrington Stanley midfielder made headlines when he signed for Rangers in the summer of 2016. Having made sporadic appearances for the Scottish club, due to injury, Crooks returned to south of the border and signed for Scunthorpe, where he scored three times in a short loan spell.


Uwe Rosler has named his side to face Northampton Town this afternoon at Sixfields Stadium. 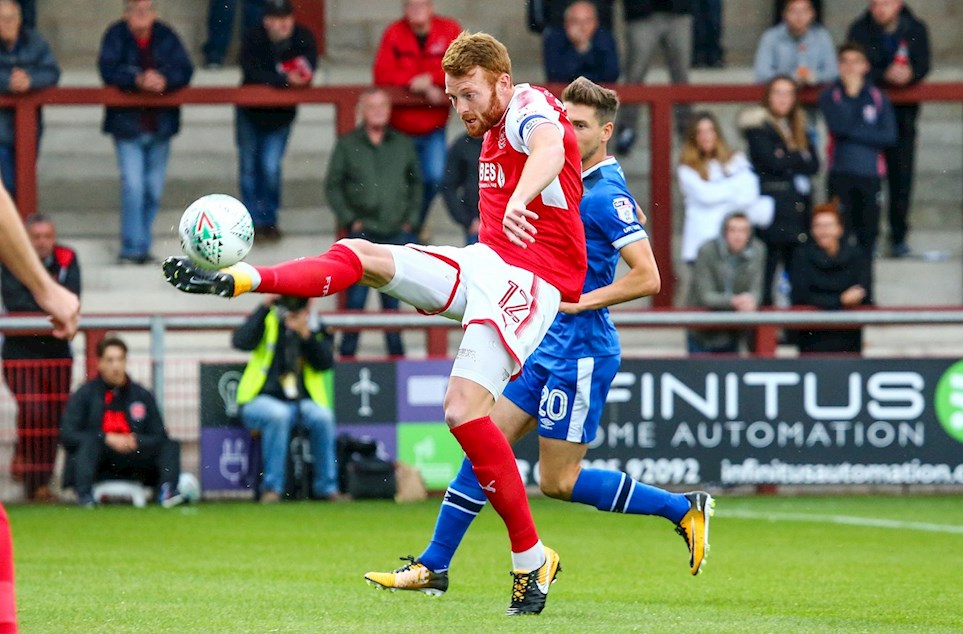 Bolger keen to build on high standards set against Rotherham

Fleetwood made it two wins from two in Sky Bet League One as they beat a battling Northampton Town 1-0 thanks to a late Devante Cole goal.

Substitute Cole strung the offside trap and outpaced the home defense and slotted his low effort past David Cornell to seal all three points.
The Cod Army began the brightest at Sixfields and could have been 1-0 up within the opening minute. Cian Bolger headed George Glendon’s corner onto the line and it was cleared through a melee of bodies by Aaron Phillips and away to safety.
Town were then given another golden chance to take the lead, as Kyle Dempsey pounced on a loose ball in midfield before threading a neat pass through to Jordy Hiwula, who forced a one handed save from Cornell.
The play wasn’t all going Fleetwood’s way in the early stages though, as Northampton threatened with a header from Ash Taylor that flew just over the bar, before former Cod Chris Long tested the reflexes of Alex Cairns from just inside the box.
Dempsey was the next to have a chance, with his low shot going just wide of the Cobblers’ goal. Town were forced into an earlier than fancied change as Conor McAleny was forced off with a knock, with Wes Burns his replacement.
Yaser Kasim was proving a dangerous threat for the home side, causing problems in mifdfield. It was to be Kasim who created a great chance for his side as his curling free kick sailed agonisingly over Cairns’ bar.
With the match heading to the break goalless, a wild final two minutes to the half ensued. First, Coyle cleared Billy Waters’ effort off the line, with play continuing around the penalty area. A looping ball over the top found an unmarked Aaron Pierre in the six-yard box, who will wonder how his header did not go in. Cairns produced flurry of acrobatic saves to deny him not once, twice, but three times.
Rosler made a second change at the break, introducing Burnley loanee Aiden O’Neill in the place of Glendon.
Burns was to create the first clear cut chance of the half as he shimmied his way into the box, but Taylor thwarted him from advancing any further. Alex Revell had the chance put the hosts ahead but his long range effort did little to test Cairns.
Long was the next to try his luck, as he turned Ash Eastham on the edge of the box and fired over from a narrow angle.
Rosler had introduced Cole to the action in a bid to break the deadlock, and Cole was to have a huge impact just a few minutes later as he did just that. The striker pounced on a through ball from O’Neill and slotted past Cornell in the Cobblers goal to give the Cod Army the lead.
As the game headed into the final throes, Fleetwood pushed for a second goal to put the game to bed, with O’Neill coming the closest to doubling the lead. He reacted first to Amari’i Bell’s lay off before forcing Cornell into a catch.
That was to be the final action of the game, as Fleetwood snatched all three points.
Attendance: 5124 (103 away)


Uwe Rosler has named his side to face Northampton Town this afternoon at Sixfields Stadium.

Bolger keen to build on high standards set against Rotherham

Tickets and travel for Fleetwood Town's trip to Northampton Town are still on sale.

Uwe Rosler's side travel to Sixfield Stadium on Saturday 12th August (3pm), looking for back to back wins in Sky Bet League One after the 2-0 home win over Rotherham United last weekend.

The club are running supporters coaches that will be departing Highbury Stadium at 8:30am. The price is £13 for Season Ticket Holders/Under 16/Members and £26 for all other supporters.

FTFC supporters will be situated in the Moulton College Stand. See tickets prices below –

Tickets are available to purchase from the ticket office at Highbury Stadium, or over the phone by calling 01253 775080. 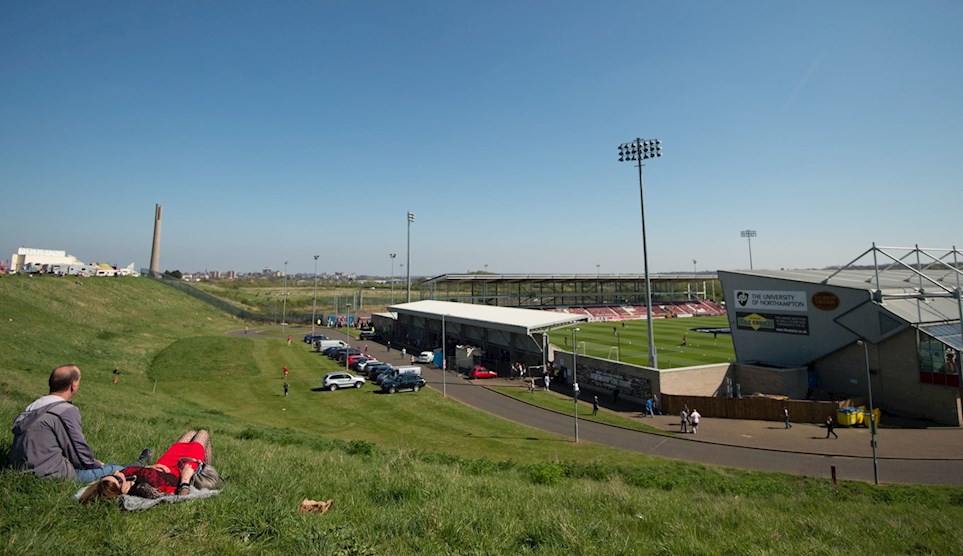 
Tickets for Fleetwood Town’s trip to Northampton Town on Saturday 12th August 2017 (3pm) will go on sale on Wednesday 2nd August at 9am.