Fleetwood Town return to Highbury on Saturday as they open the new Sky Bet League One season against Rotherham United (3pm k/o).

The Cod Army created history last term, finishing fourth in the league standings before narrowly losing in the play-offs against Bradford City.

Rotherham – who will see Paul Warne start his first full campaign as full-time first team manager – have had success over pre-season with a highlight being their 4-0 win against Barnsley. The Millers were relegated from Sky Bet Championship last time around.

After a disappointing season, the South Yorkshire side will be hoping to bounce back and gain promotion at the first attempt. New signing David Ball, who has scored six goals in pre-season for his new club, will be looking to score against the club who he had five successful years with.

Town have a full squad to select from, with a host a new signings including Lewie Coyle and Conor McAleny pushing to make their competitive debuts for the club.

The Millers are set to name a former Fleetwood front two – with Ball and Jamie Proctor set to the lead the line at Highbury.

Ex-Town striker Ball is no stranger to Cod Army fans after spending five years with the club before signing for Rotherham in the summer.

The attacker started his career at Manchester City scoring a memorable goal to secure victory in the 2008 FA Youth Cup final against Chelsea. He later signed for Peterborough United in 2011 and made over 40 appearances before moving on-loan to Rochdale.

On the 23rd July 2012, Ball signed for Fleetwood Town and enjoyed a five-year spell at the club with the highlight being his goal against Preston North End and it being nominated for FIFA Puskas Award in 2015, as well as being a key member of the side that won promotion from Sky Bet League Two.

In June 2017, the 27-year-old signed for Saturday’s opponents Rotherham United on a two-year deal after leaving the Fylde Coast side in the summer.

Tickets are still available for the match at Highbury, but ONLY for home fans, as the away allocation is sold out. 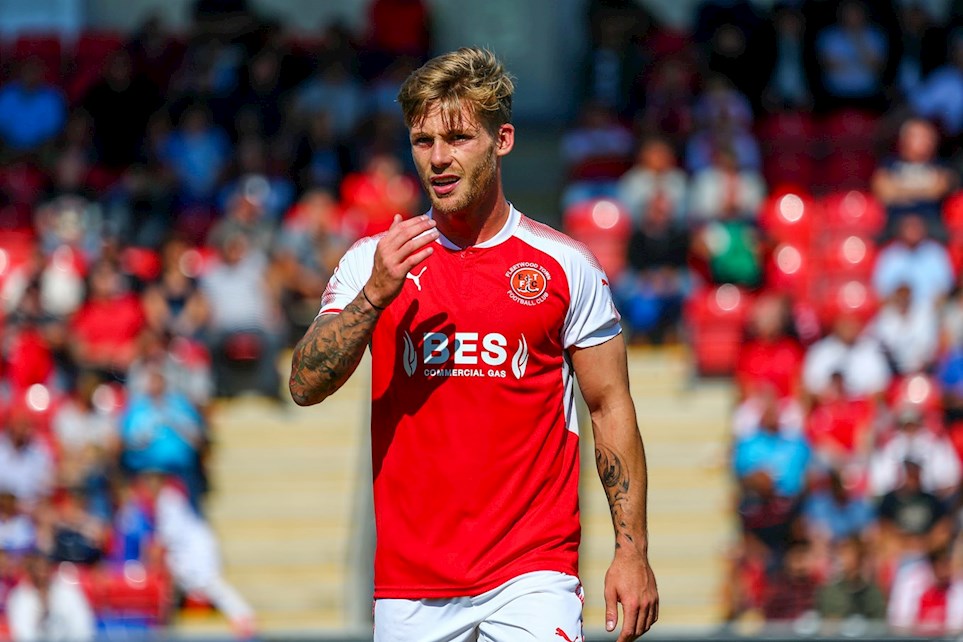 
Uwe Rosler has named his side to face Rotherham United this afternoon at Highbury.

Fleetwood began their Sky Bet League One campaign in the best possible fashion with a fine victory over Rotherham United at Highbury.

Conor McAleny scored twice on his competitive debut with two brilliant finishes in game that was pulsating from start to finish.

The former Everton attacker was one of four new signings in the starting line-up, alongside Lewie Coyle, Kyle Dempsey and Jordy Hiwula.

League newcomers United were quick out the blocks at Highbury and applied early pressure to the Cod Army back line, but it was to be Town who would create the first clear cut chance. After a smart break away move, McAleny fired just over from 30 yards.

The hosts gave the visitors a scare minutes later as Jordy Hiwula broke through the defence and slotted past Rotherham keeper Richard O’Donnell, only to be denied a debut goal by the offside flag.

The offside flag was to deny the opening goal again, this time for the away side, as Lee Frecklington received the ball from a corner and his low drive from outside the area looked to have take a deflection and was duly ruled out.

McAleny’s impact on the game was clear, and it was the new man who gave Town the lead. After receiving the ball on the right, Bobby Grant played a low cross into the area and McAleny neatly struck the ball past O’Donnell.

The hectic opening twenty minutes calmed after the goal, but the contest remained an end-to-end one. Chances were few and far between as the game began to even out and there was little to suggest there was to be a second goal in the half.

However, further great chances did come and Town could have extended their lead as Town peppered the Yorkshire side’s goal. As Cian Bolger flicked a header from Alex Cairn’s goal kick goal-wards, Hiwula took down the ball neatly and struck the post. From the rebound, the ball fell to Kyle Dempsey who tested the palms of O’Donnell.

The final action of the half was again a Town chance, as Bobby Grant flicked a neat ball just over the bar.

The second half began with the same ferocity as the first with both sides competing end-to-end. Will Vaulks was the first to test the reflexes of Cairns, who parried his 25 yard effort.

Rotherham grew in confidence, causing Rosler’s men problems defensively, but the Millers were reduced to try long-range efforts. Former Town striker David Ball’s curling effort on the edge of the box was well saved by Cairns.

Much like the opening stages, Fleetwood continued to look impressive on the counter attack, with Amari’i Bell’s cross just a slight touch away from doubling lead. Moments later it was déjà vu, this time Hiwula needing the touch to guide in from McAleny’s offload.

With play firmly with the home side, Town soon doubled they lead they perhaps deserved. With the debutant causing problems for the Rotherham defence, McAleny soon had the ball in the net for the second time as he cut in from the left and fired past O’Donnell to complete a stunning move.

The Town fans behind the goal quickly ramped up the decibel level with an electric atmosphere now engulfing Highbury, helped by a healthy number of boisterous Rotherham fans.

Most of the attacking play was with the visitors but a resolute Cod Army continued to frustrate their opponents. Ashley Hunter and Devante Cole were introduced to the action, with the latter replacing the impressive McAleny, who received a standing ovation from the three sides of home fans.

In the dying embers of the game, Cole could have ended the tie but brilliant closing down from Joe Mattock prevented him from firing past O’Donnell.

This was to be the final action of an impressive win for the Cod Army, who begin the season with a blistering win.


Uwe Rosler has named his side to face Rotherham United this afternoon at Highbury.