After successfully bouncing back from defeat by beating Oxford United on Tuesday, John Sheridan’s side will be looking to continue their good recent form when they travel to Blackpool on Saturday for the Fylde Coast derby.

The match will be Town’s first game at Bloomfield Road since November 2015 and pits the two sides currently 11th and 12th in the Sky Bet League One table against one another. 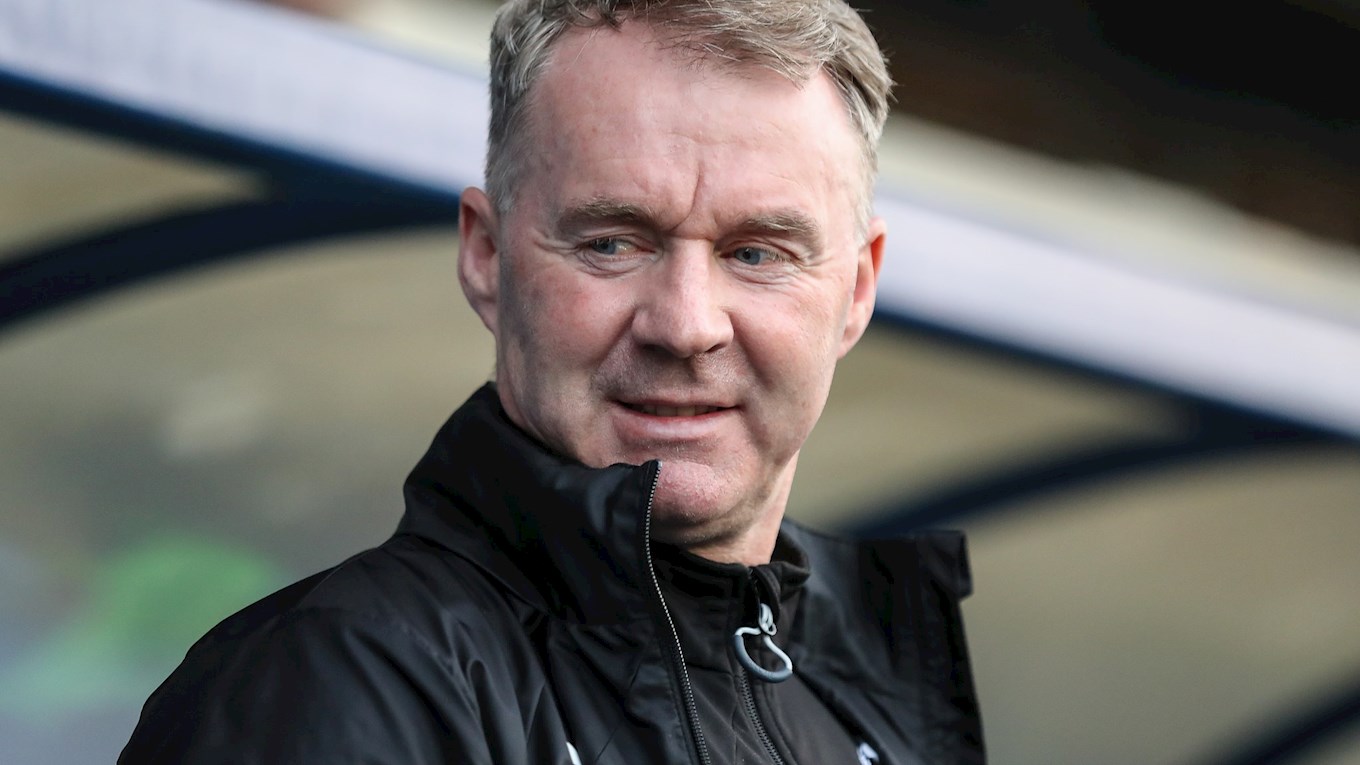 "It's a derby, but we're taking it as another game where want to go and win. Derby's are usually tight games, and we have to be ready for a battle.

"The players are doing really well. We've shown what we're capable of and we've only lost one game in nine. The lads have been excellent.

"The pressure is off a little now we're up to 54 points. We've had to dig in and grind out results which has been pleasing." 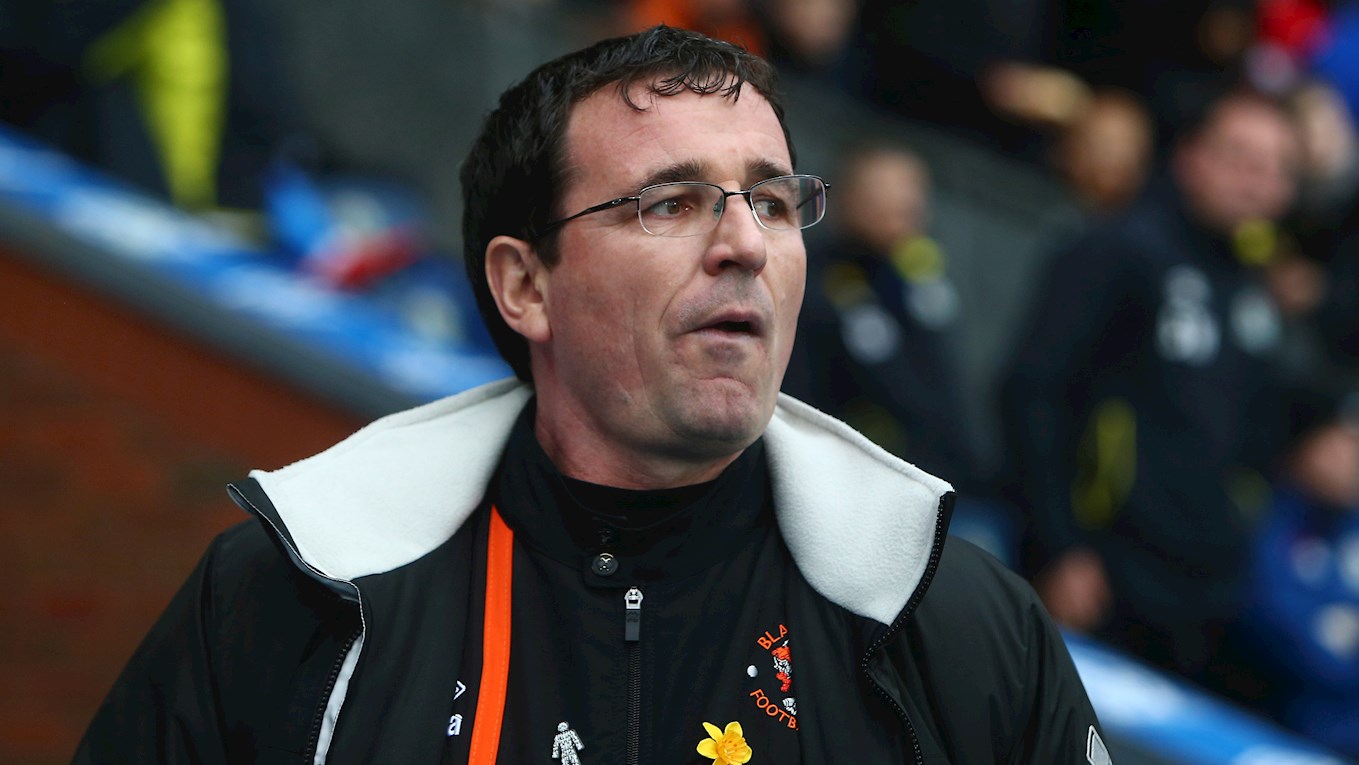 “We’ve got to recover quickly now [after playing on Tuesday] and go again because it’s a tough week for us – Saturday-Tuesday-Saturday.

“It’s a local derby but we’ve got momentum and we want to continue that. I want us to finish as strongly as we possibly can and get as many points as we can.

“Kyle Vassell wasn’t far off returning on Tuesday to be fair, so we’re certainly hoping he will be back in on Saturday. 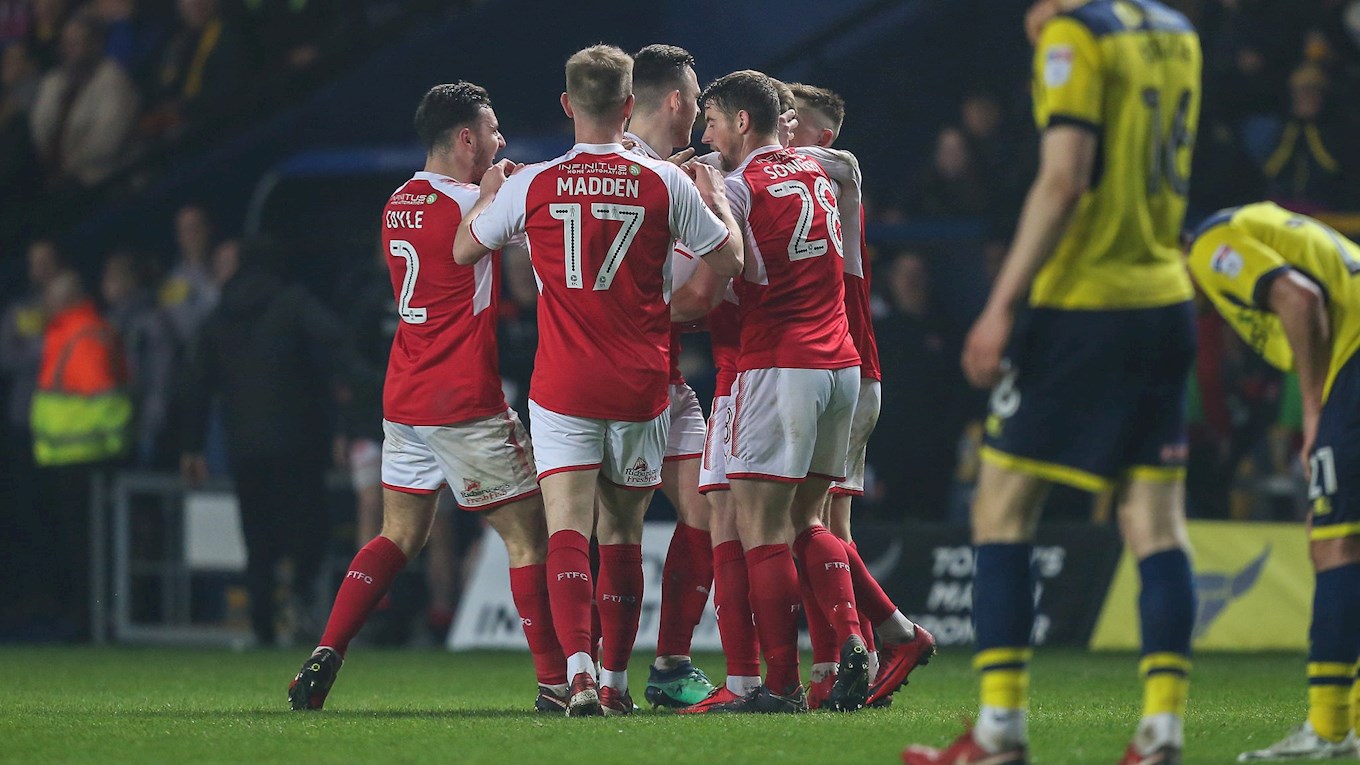 Blackpool have won their last two games, scoring eight in total and none conceded. Saturday’s 5-0 win over Bradford was, however, their first victory in five. They have only failed to score at home twice this season.

Fleetwood have lost just once in their last eight games, winning five and conceding four times in that period. Town have kept a clean sheet in four of their last five away games. 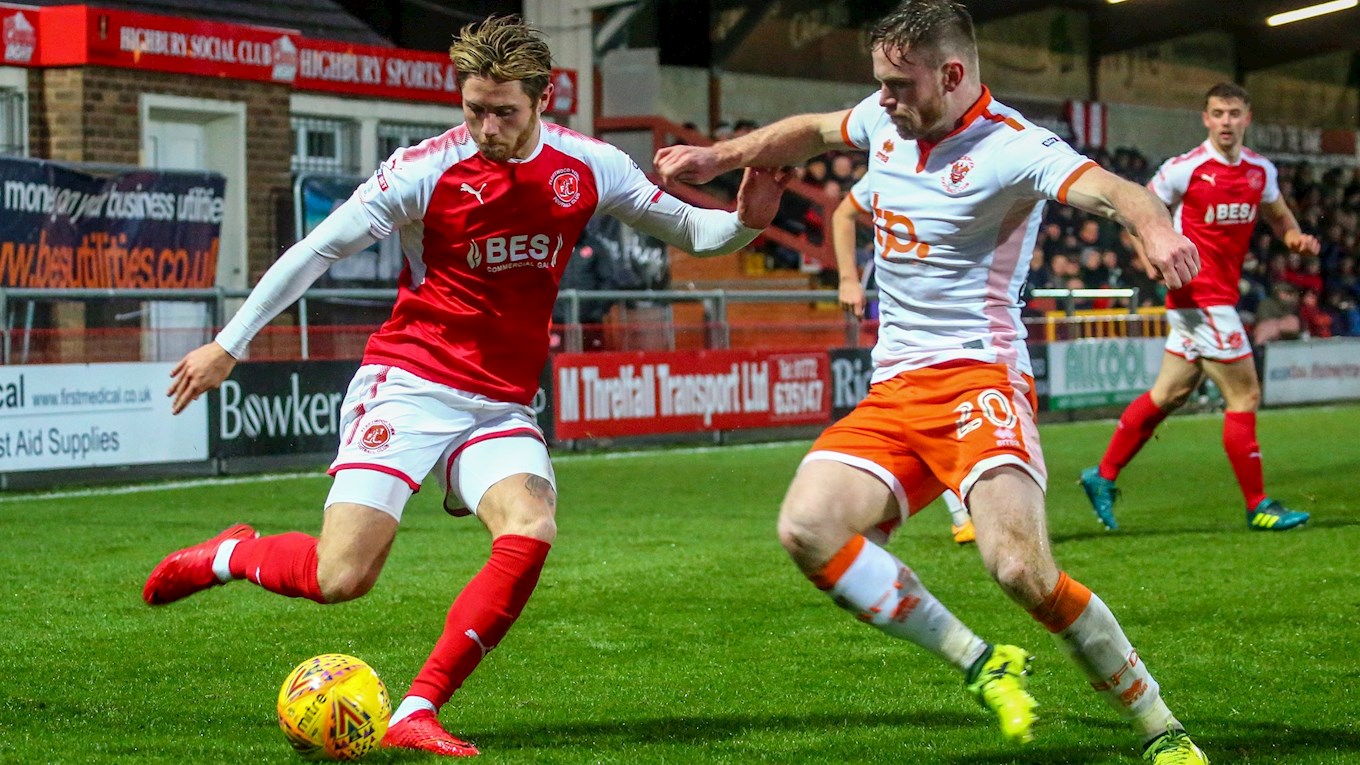 Saturday’s meeting will be the fifth competitive fixture between the two. Fleetwood are yet to beat their Fylde Coast neighbours in the previous four, with the last two ending goalless.

Blackpool won the first meeting 5-1 at Highbury in an FA Cup tie in 2012, and won the following match 1-0 at Bloomfield Road in November 2015 when an own goal decided the game.

A name memorable to Fleetwood fans would be Jimmy Ryan, who played 59 times for the Cod Army before joining the Tangerines in 2017. He scored in Blackpool’s 3-0 win over Northampton on Tuesday, taking his season’s tally to three goals. Before joining Fleetwood in 2015, where he scored three times during his time at Highbury, he had lengthy spells with Accrington Stanley, Chesterfield and Scunthorpe United.

What the Bookies Say 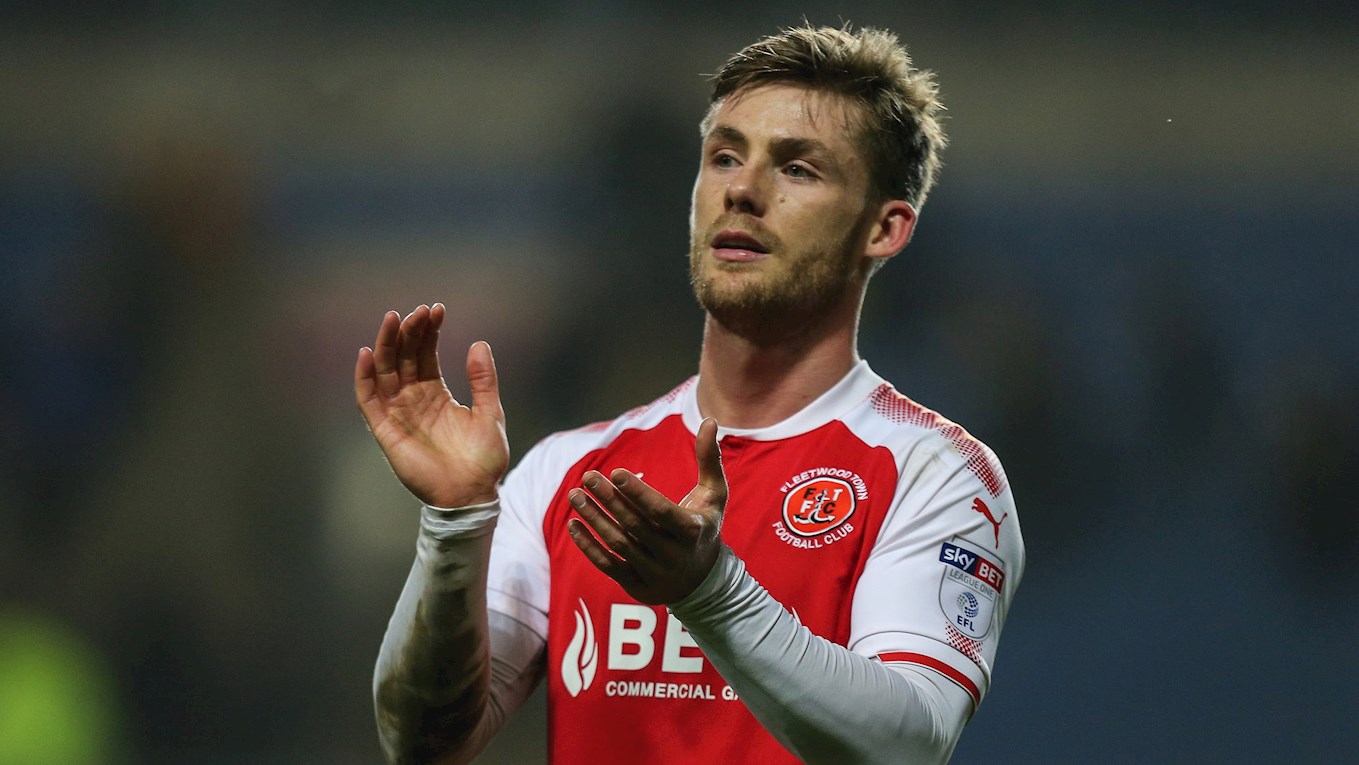 League partner Sky Bet have announced their odds for Saturday’s clash. Fleetwood are 13/5 to take the win at Bloomfield Road, while the home side are 11/10. A draw is available at 23/10.

Conor McAleny scored the stunning winner at Oxford on Tuesday night, and a score cast of him to score first and Town to win 2-1 is available at 55/1.

To score in 90 minutes, Ash Hunter and Jordy Hiwula are both available at 9/4, while Cian Bolger is 17/2. 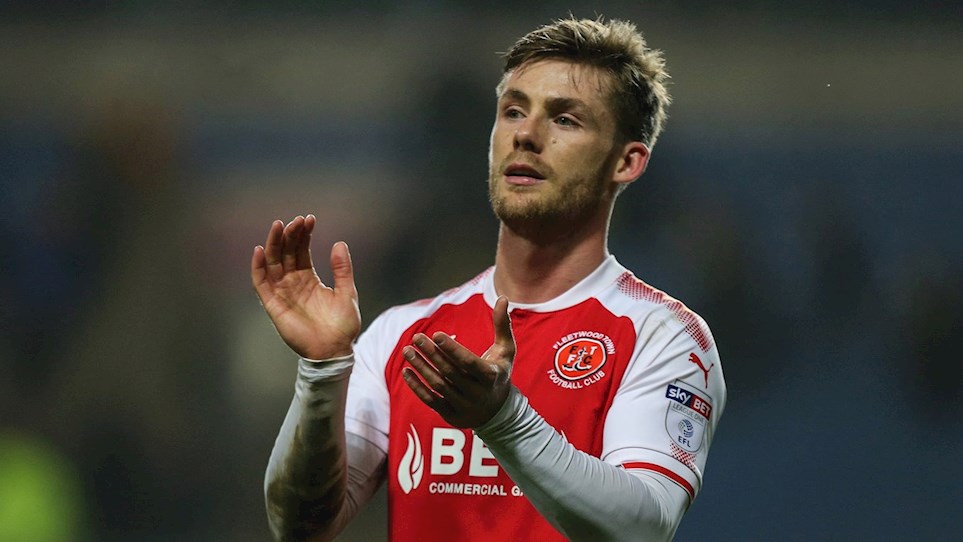 
John Sheridan has named his side to face Blackpool in the Fylde Coast Derby at Bloomfield Road this afternoon. 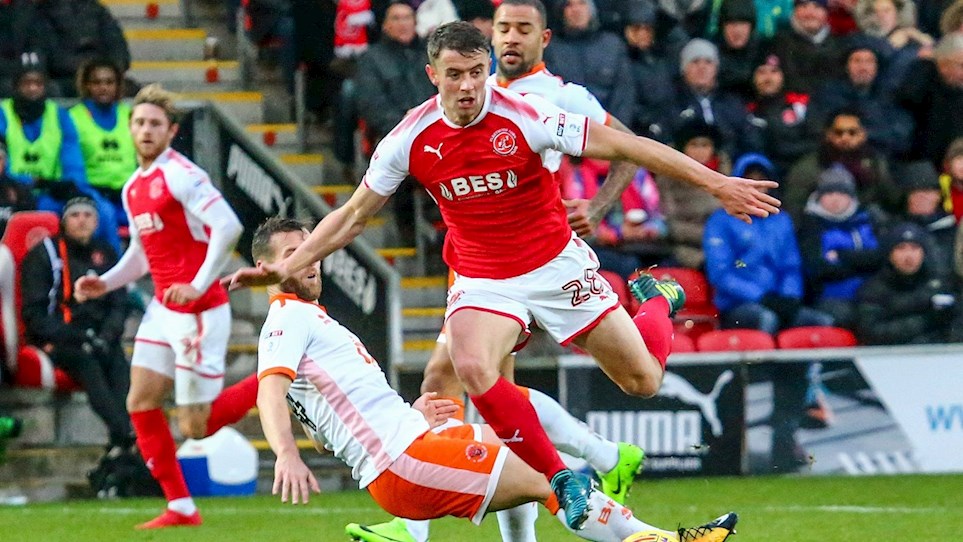 
John Sheridan has turned round Fleetwood’s form this season, and now he look to achieve something no other Fleetwood Town head coach has managed in the Football League – a win over local rivals... 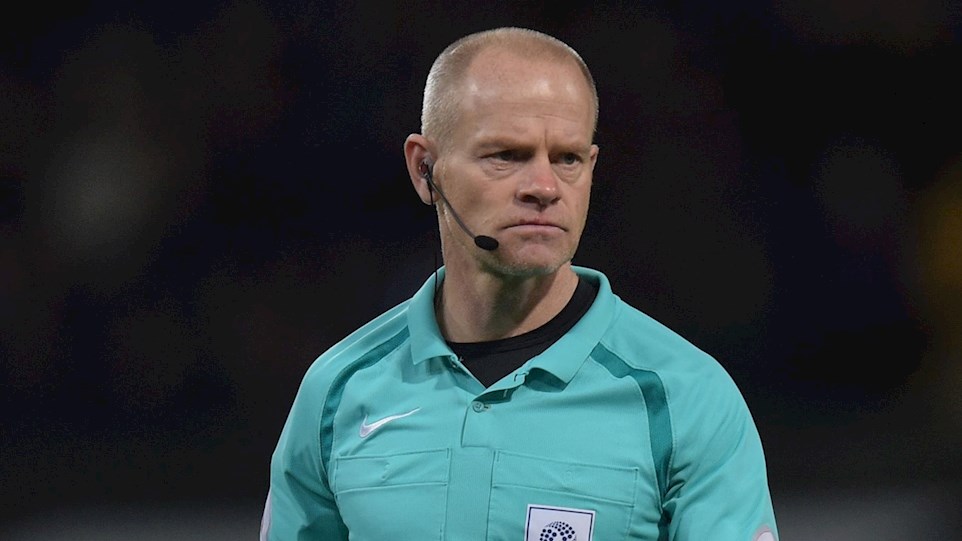 
Andy Woolmer has been announced as the referee for Saturday’s Fylde Coast Derby against Blackpool. 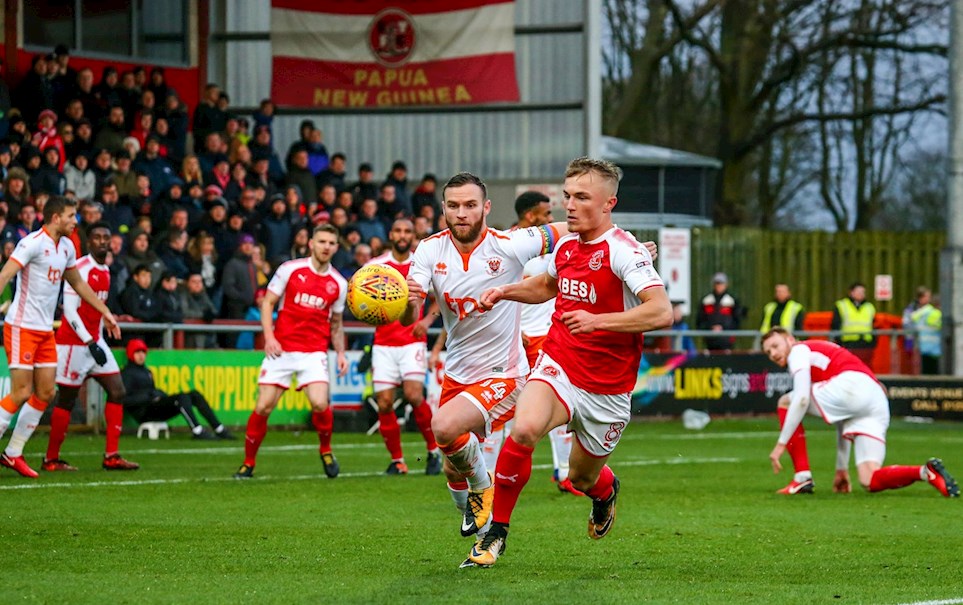 Derby match with Blackpool just around the corner

Two late goals from Blackpool ensured it was late heartbreak for Fleetwood Town, as they lost 2-1 at Bloomfield Road.

After an even first half, it was substitute Wes Burns who gave Fleetwood the lead with 15 minutes to go, but two late goals from Viv Solomon-Otobor and Armand Gnanduillet give the Seasiders all three points.

Gnanduillet’s strike was in the third minute of injury time, sending the 1,300+ Town fans back up the coast defeated.

John Sheridan made three changes to the side that picked up all three points on Tuesday night at Oxford United, with Cian Bolger missing out through injury, and Bobby Grant and Jordy Hiwula dropping to the bench. Nathan Pond, Conor McAleny and Paddy Madden came in.

The atmosphere inside Bloomfield Road was electric from start to finish with the Cod Army making all the noise in the away end.

And it was a bright start to the match for Town as McAleny picked up the ball outside the Blackpool 18-yard-box, he worked the ball onto his favoured right foot, had a strike at goal but Joe Lumley was there to parry the ball away from danger.

Seasiders midfielder Jay Spearing had the home side’s first attempt at goal, he picked up the ball in a deep position, the defenders didn’t get close to him as he saw an opportunity to shoot. The low driven shot beat Alex Cairns, but not the woodwork. A good chance for Blackpool.

Gary Bowyer’s side looked on the up after that and managed to cause some uncertainty in the Town back line. Ex-Fleetwood man Jimmy Ryan delivered a peach of a ball into the box, but to his frustration, no teammate gambled to knock the ball home.

The Cod Army nearly took the lead just before the break. After a quick free-kick, McAleny ran at the Pool defence, he found Madden on the edge of the box who then flicked the ball to Hunter. The 23-year-old took one touch to get the ball out of his feet, his second was a strike at goal but it was blocked by Clark Robertson.

The second half was lively too, and it wasn’t long before Sheridan made his first change. Burns was brought on to add something different to the match, and within 60 seconds, he was played through by Pond. The goalkeeper had a moment to forget as he rushed out, didn’t win the ball but as Burns went to shoot, the defender came across to the rescue and blocked his effort.

The game started to open up even more and this saw Town’s head coach make another change. Hiwula and Grant were introduced to the match and this saw the Huddersfield Town loanee make his 50th appearance for the club in all competitions.

The striker didn’t leave it long to get involved after a long ball over the top found the lone man, he knocked it down to Hunter who again took one touch, cut across the ball on his strike and made Lumley pull off a fantastic save to his right hand post.

Town took the lead half way through Burns in the 74th minute. After a mistake at the back from Tilt, Hiwula was one on one with Lumley, after going around the goalkeeper, his effort hit the near post. The ball came back to Burns whose shot on goal took a deflection over Tilt’s head on the line into the back of the net.

The travelling fans continued to make plenty of noise and it was only minutes after the opening goal when Burns went through after Diagouraga played him in, but he opened his right foot too much and it went wide and out for a goal kick. A key moment in the match.

Blackpool got level two minutes from time after Solomon-Otobor took advantage of a loose ball in the air, his volley nestled in the top corner to give the home side a boost.

As the fourth official signalled four minutes of added on time, there was one last chance for Blackpool and they took it when it came. In the 93rd minute, substitute Gnanduillet headed home from close range.


John Sheridan has named his side to face Blackpool in the Fylde Coast Derby at Bloomfield Road this afternoon.


John Sheridan has turned round Fleetwood’s form this season, and now he look to achieve something no other Fleetwood Town head coach has managed in the Football League – a win over local rivals...


Andy Woolmer has been announced as the referee for Saturday’s Fylde Coast Derby against Blackpool.

Derby match with Blackpool just around the corner

Tickets are still on sale for Fleetwood Town’s Fylde Coast derby against Blackpool.

The match – which takes place at Bloomfield Road on Saturday 14th April 2018 – will see John Sheridan’s side look to claim their first ever victory over The Seasiders.

Both sides drew 0-0 at Highbury earlier in the season, with the returning fixture having a huge significance with both sides fighting to stay in League One.

FTFC supporters will be situated in The North Stand. Tickets are priced as follows:

Please note – we will not be running any supporters coaches for this match.